This 1930s image depicts the fountain with its larger column, which was added in 1916 to match the height of nearby streetlamps. It has since been reduced to its original height. 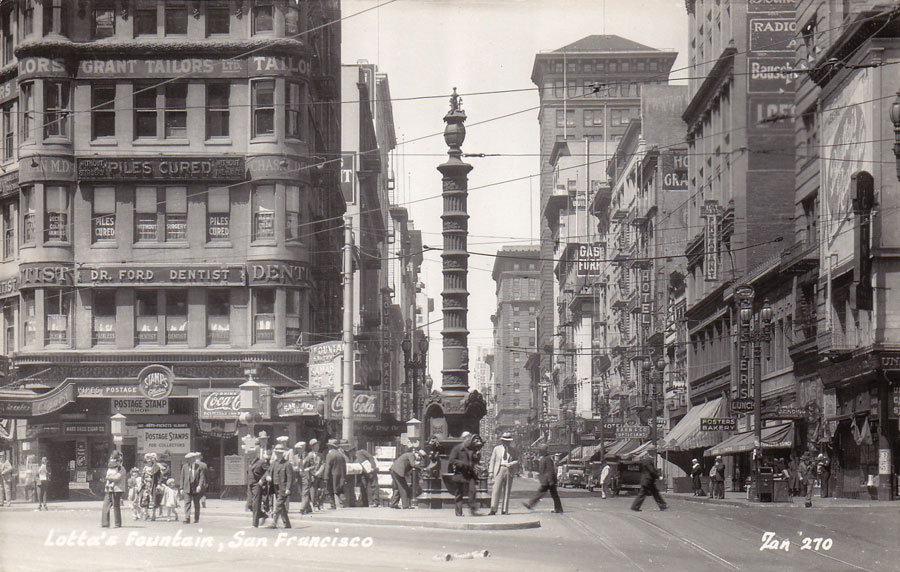 Charlotte Mignon “Lotta” Crabtree, who rose to fame in San Fransisco and gifted the city a beautiful cast iron fountain. 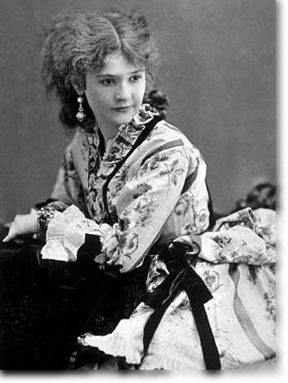 Lotta's Fountain is one of only a few public works of art in San Fransisco that represents real women, entertainers Lotta Crabtree and Luisa Tetrazzini. 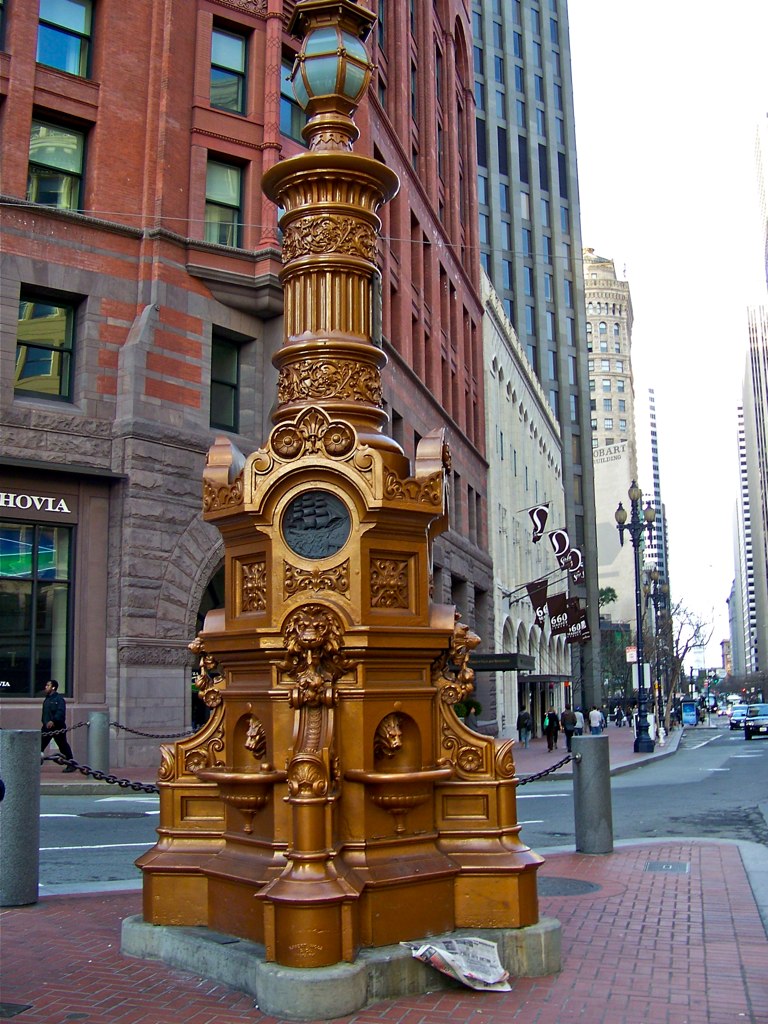 Lotta's Fountain at its original location at Third, Market and Kearny, prior to the 1906 earthquake. Wikimedia Commons. 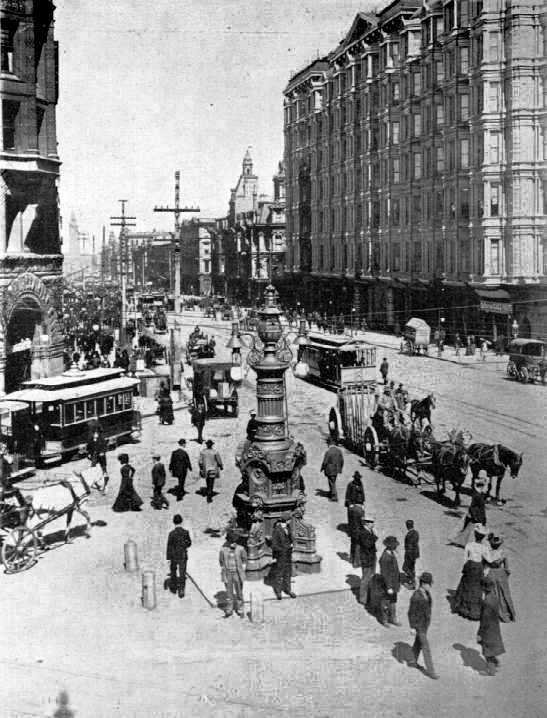 Luisa Tetrazzini, an Italian soprano, performed in front of Lotta's Fountain on Christmas Eve in 1910. A bonze relief of her portrait remembers this historic performance. Wikimedia Commons. 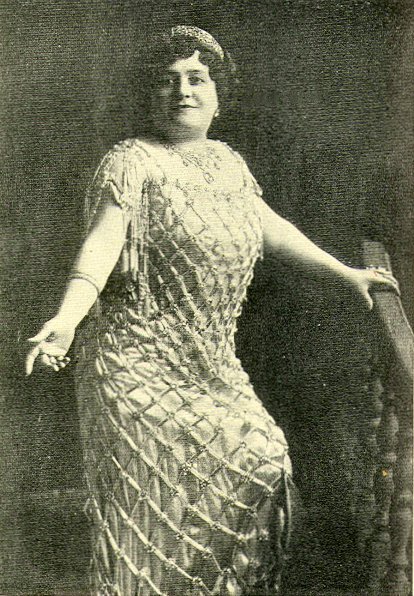 In 1875, Vaudeville actress Lotta Crabtree, who rose to fame while living in San Fransisco, gifted her city with a beautiful fountain. This fountain would become an important landmark in San Fransisco. Crabtree, one of the highest paid entertainers of her time, got her start during the Gold Rush days, when she would dance on barrels in saloons for miners who would throw gold nuggets at her feet. Said to posses "the most beautiful ankle in the world," she was famous for her red hair, dark eyes, and her dances. She was especially known for the "Spider Dance, involving bodily gyrations intended to indicate shaking off of imaginary spiders and entangling spider webs."1 Crabtree purchased the fountain from a catalogue and had it sent from Philadelphia to San Fransisco, where it was dedicated on September 9, 1875.

In the early morning of April 18, 1906, a massive earthquake rocked northern California, its forces and resulting fires destroying most of San Fransisco and killing up to 3,000 people. In the aftermath, Lotta's Fountain became a meeting point for survivors looking for loved ones and for work. Bulletin boards surrounded the fountain for survivors to communicate with one another, some receiving answers and others not. Thereafter, the fountain represented not only singer Lotta Crabtree, but thousands of lives lost in the earthquake. In 1915, Crabtree made her first public visit to the fountain, laying a breath at the base of the fountain.

Throughout the twentieth and twenty-first centuries, Lotta's Fountain has remained an important landmark in San Fransisco, especially for remembering the earthquake. A number of singers and musicians have performed at the fountain. On Christmas Eve, 1910, Italian soprano singer Luisa Tetrazzini, who also found success in San Fransisco, performed at the fountain to a crowd of around 250,000. In the following years, violinists Jan Kubelik and Misha Elman also entertained thousands at separate performances. It became tradition to remember the earthquake every April by gathering at the fountain.

This historic cast iron fountain features an eight-foot columnn topped with an ornate light fixture. Mounted on the base of the columnn is a bronze relief plaque featuring a bust portrait of Luisa Tetrazzini. The middle section is decorated with floral embellishments and two relief medallions depicting scenes of San Francisco. One of the medallions depicts a schooner ship. The second medallion depicts gold rush miners digging for gold. The third medallion, originally symbolizing agriculture, was replaced in 1916 with a plaque commemorating an elongated columnn at the top of the fountain that reached the new height of Market Street; this columnn has since been removed and the fountain refurbished to its 1875 condition. Below the medallions, on all four corners of the fountain, are lion's heads. Four semicircular fountain basins jut out from the sides of the fountain near the base, each basin with a spigot in the form of a griffin's head. Originally, there were tin cups chained next to each basin, but they no longer exist. The fountain rests on a granite base.

Lotta's Fountain has been restored twice, once as part of the $24.5 million beautification of Market Street and the second time in 1998, which got the water running through the fountain again. In being named after Lotta Crabtree and featuring a bronze relief of Luisa Tetrazzini, the fountain is one of only a few works of public art that represents women in San Fransisco, which will hopefully change as new initiatives to create public art honoring women are underway. The fountain's connection to the 1906 earthquake remains strong, as each April 18 at 5:18 am, crowds gather to remember the victims, survivors, and heroes of this historic moment.