The massive brick building with the corner tower at the intersection of Washington Ave. and Lark St. (Rt 9W) was the Washington Avenue Armory. The Armory was constructed in 1891 for a local unit of the N.Y.S. National Guard. The armory closed in 1991 and the New York State Department of Education bought the property. The armory then housed the Military Museum of New York State. The armory was purchased by a private developer and millions of dollars were spent to renovate the building. It now houses The Armory Sports &amp; Recreation Arena. The Albany Patroons basketball team plays there, and other sports events are staged in the facility. The Armory was listed in the National Register of Historic Places (1995) and is part of the Washington Avenue Corridor Historic District (2019).

This stately brick Italianate/ Renaissance Revival style building is known as the Walter Merchant House and was completed shortly after the Civil War. Walter Merchant was a local produce and grain dealer who owned a two-story townhouse at 186 Washington Avenue and later bought the adjacent lot, demolished both buildings, and had this new home built in 1869. The Walter Merchant House became a National Register-listed building in 2002. Very few contemporary residences survive in this neighborhood. The mansion's brick, two-story carriage house still stands on the northeast side of Spring Street (#35), to the rear of the Merchant House lot's parking area. The Merchant House has become the offices of the New York State Chapter of the National Association of Social Workers, an organization that bought the property and restored it in the 1990s.

The brown brick building at 44 Central Ave. next to the parking lot was constructed in the mid-1810s as a commercial building. Jacob Steenburgh bought the lot in 1814 and the Steenburgh and Welch store was here by 1817. Later, a local brewer, Robert Higgins, used the building for part of his business. The wedge-shaped structure contained a grain and feed storage and sales firm (J.R. Peters &amp; Sons) from 1887 until 1947. The building was renovated in the early 1980s and now houses the Preservation League of New York. It was added to the National Register of Historic Places in 2014 and also is part of the Washington Avenue Corridor Historic District.

The brick structure on the west side of Sprague Pl. north of the intersection with State St. is the Benjamin Walworth Arnold House. The Colonial Revival style home was built in 1905 for a local millionaire lumberman, banker, and philanthropist. Besides contributing to the National Register Washington Park Historic District (listed in 1972), the Arnold House and its nearby carriage house (307 Washington Ave.) were listed together in 1982. They are the only known structures in Albany designed by famous architect Stanford White. The Arnold family lived here until 1945. The next decade saw the house become a dormitory and sorority house for the New York State College for Teachers. The Albany Catholic diocese bought the house in 1956 and restored it in the 1960s. The building now houses offices of the New York State Catholic Conference. 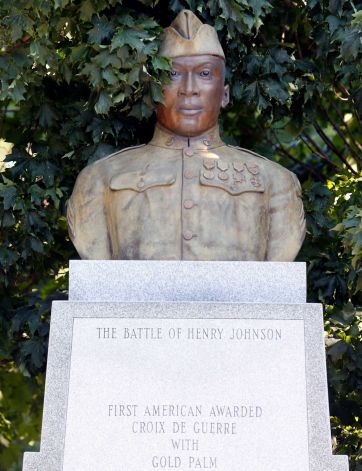 Henry Johnson was an African American soldier in the 368th Infantry, a regiment known as the "Harlem Hellfighters" during World War I. Johnson may soon be awarded the Congressional Medal of Honor for single-handedly turning back a German attack that saved the lives of his comrades.

229 Elm Street is a charming 855 square foot home built around the beginning of the 20th century. Located in the Central Square/Hudson Park Historic District, the building was formally commercially zoned, but is now a residential building. According to a Building-Structure Inventory Form from March, 1975, it was described as a “detached, single story commercial building” that had considerably deteriorated. Today, the exterior of the house has a mid-century modern style to it. It is simplistic, geometric, and functional; some of the key components of mid-century modern design and architecture. 229 Elm Street remains a practical and functional building, about one hundred years after it was initally constructed.

303c State Street is located in the Center Square/Hudson Park Historic District in the city of Albany, NY. In 1980, the neighborhood was listed on the Historic Registry. The building was built circa 1856, and was originally used as a carriage house. Center Square/Hudson Park Historic District borders the Sheridan Hollow, Central Avenue, and Downtown neighborhoods and is walking distance from the Historic Washington Park. Within this historic district, a majority of the buildings were built in the 19th and 20th century, with a sparse amount of modern buildings from the late 20th, early 21st century. During the 1850s, when 303c State Street was built, Victorian style architecture was the popular style of choice.

56 and 56 ½ Spring Street are two brick rowhouses, built during the later half of the nineteenth century. Although they were built during the early period of Victorian architecture, neither buildings reflect distinct qualities of popular Victorian styles, such as Greek Revival, Italianate, or Gothic. Rather, they demonstrate some qualities that are associated with Federal and Queen Anne style. Despite the differences in color of the bricks, both brick houses are nearly identical in structure, and are balanced symmetrically. The cornice adorning both buildings are simplistic, without an elaborate design. Both of these brick row houses are flanked by buildings that were formerly commercial garages, and possibly carriage houses during the 19th century before being converted to garages during the 20th century.

This tour starts at the former armory at Washington Ave. and Lark Street and makes a small loop that includes several historic homes and commercial buildings and through Washington Park. The park includes a statue honoring African American soldier Henry Johnson and the tour concludes near the starting place at the Albany Institute of History and Art.