Woodburn Hall is the centerpiece of West Virginia University (WVU). Constructed between 1874 and 1911, Woodburn Hall bears the name of the Woodburn Female Seminary, the first school for girls in Morgantown. Woodburn Hall is the second-oldest extant building on WVU's campus and has been a meeting place for the University community for over a century. The building was designed by renowned Morgantown architect, Elmer Forrest Jacobs, and added to the National Register of Historic Places in 1974.

Woodburn Female Seminary while still under the oversight of Elizabeth Moore. Photo taken in 1865, two years before the building was acquired by the state. 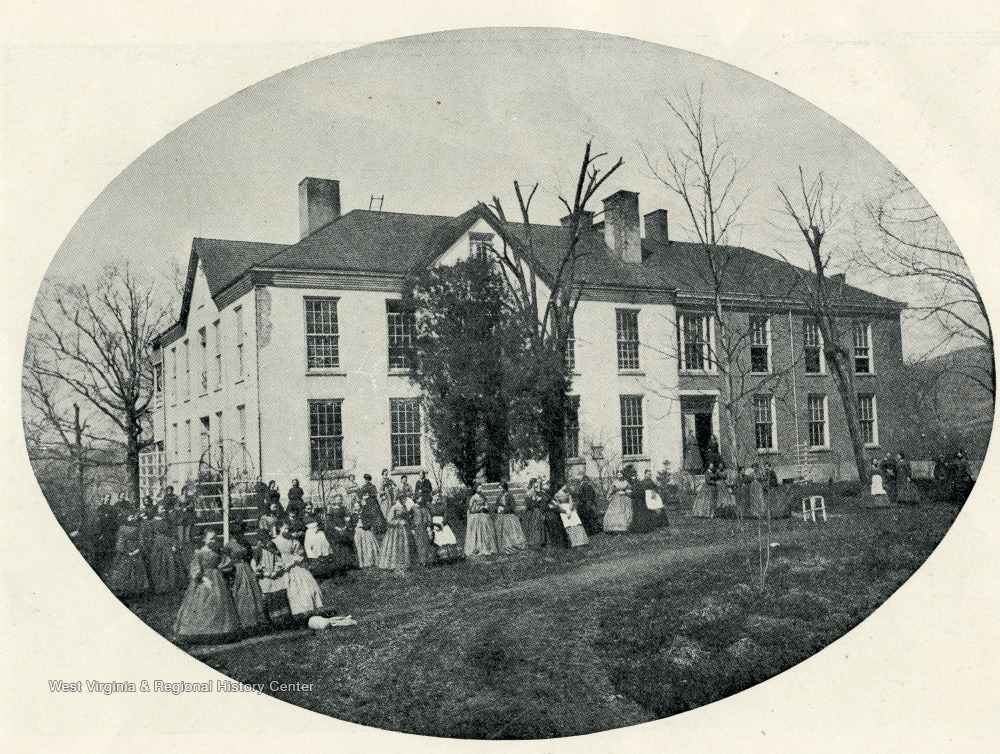 The burnt out foundation of the Woodburn Female Seminary following an 1873 fire. Martin Hall, WVU's oldest building appears on the left. Woodburn Hall was erected on the site of the seminary. 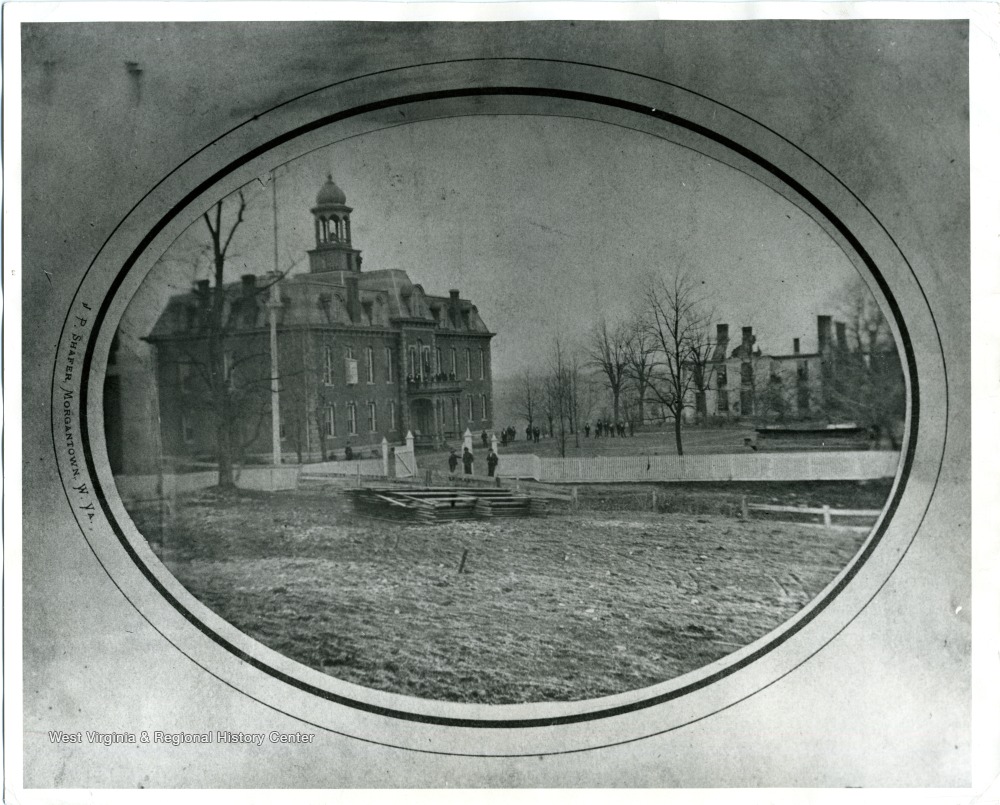 Woodburn Hall prior to construction of the building's north and south wings, photo taken 1890. 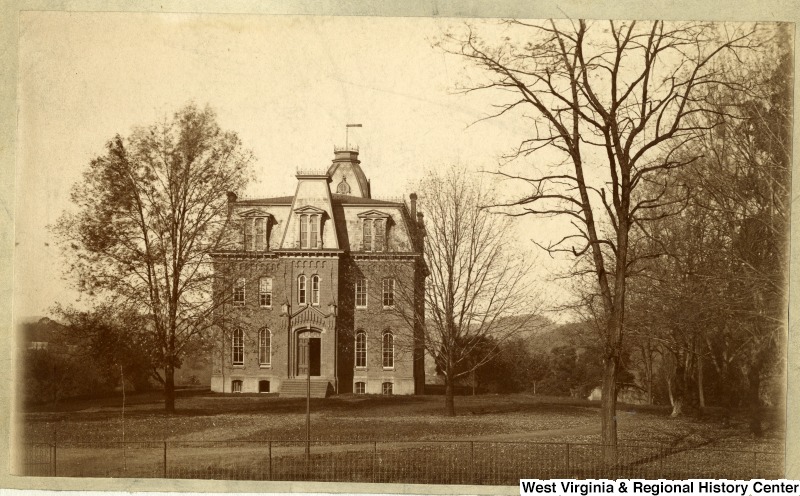 Men work to excavate an area for the foundation of the first addition to Woodburn Hall, the north wing. Photo taken ca. 1900 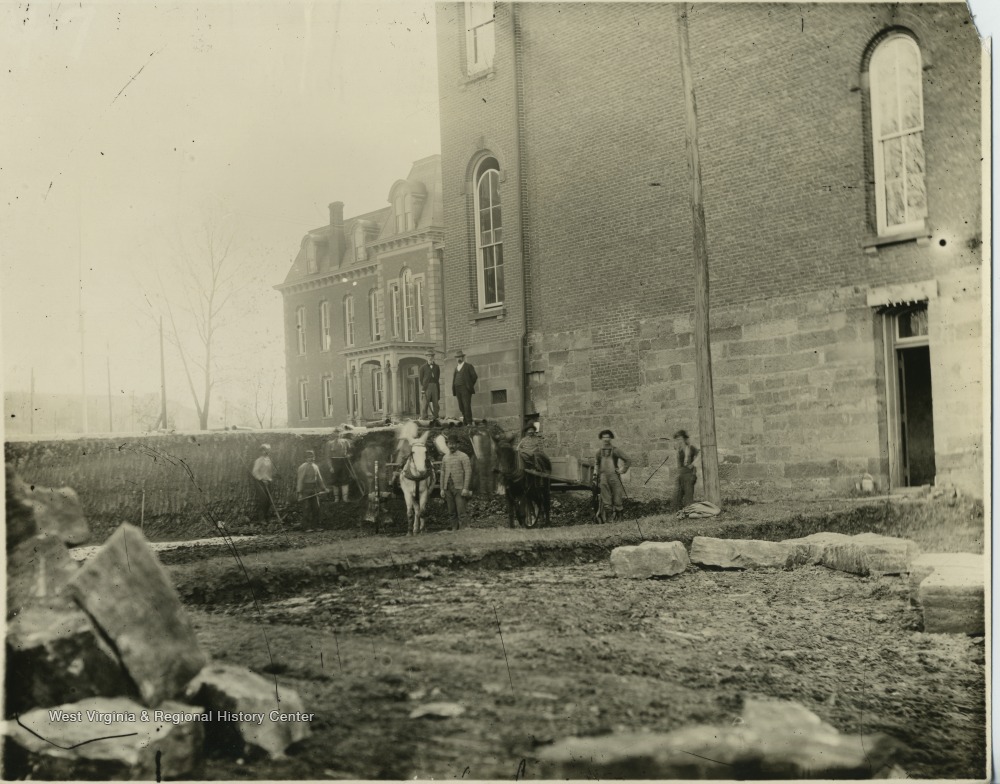 Woodburn Hall after completion of the north wing, but before the south wing was built. Photo ca. 1905. 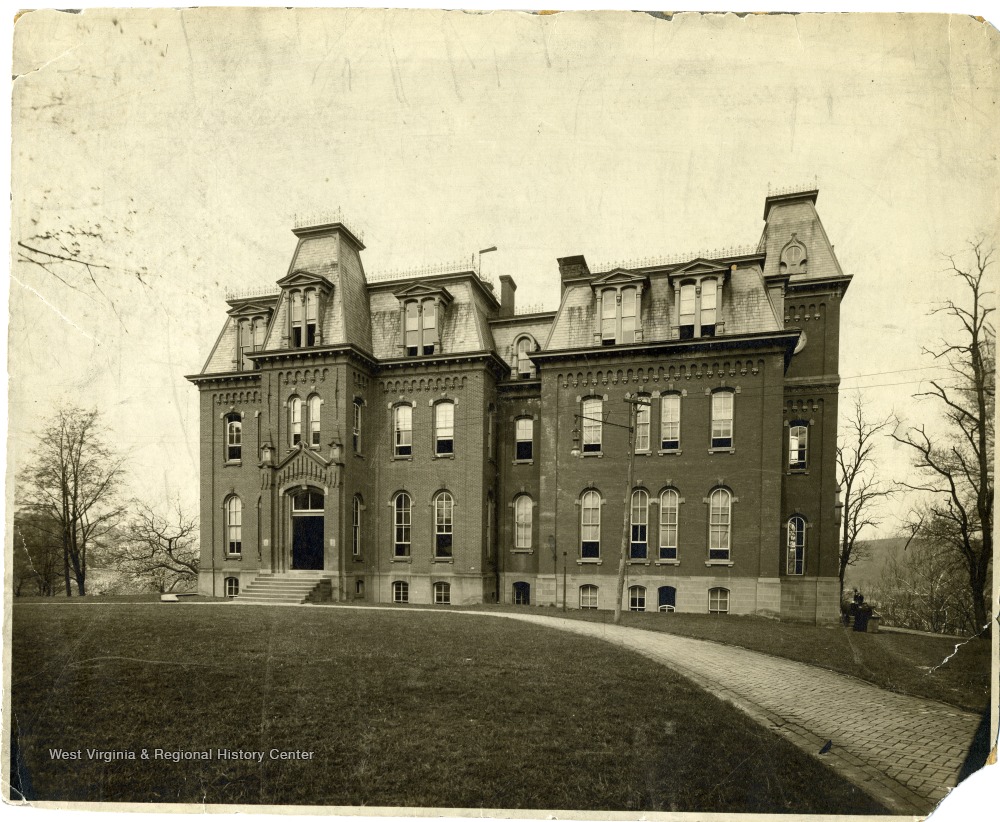 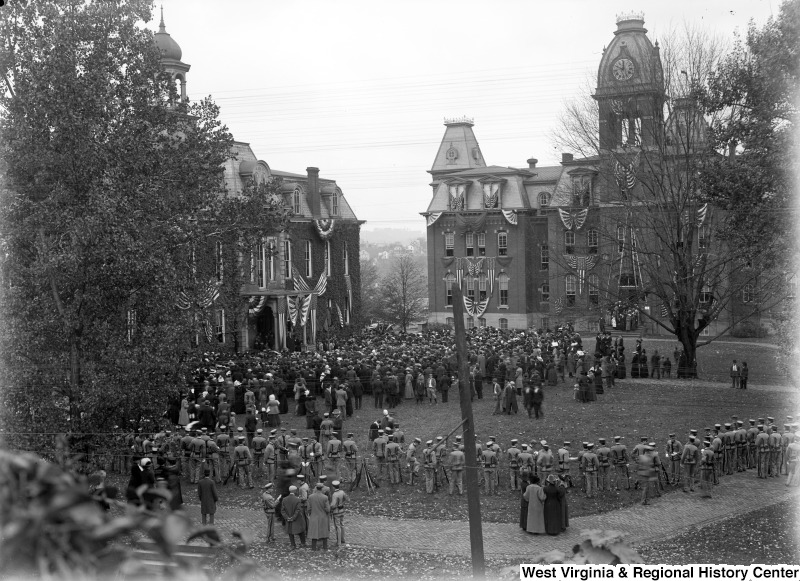 Land-grant institutions like WVU are required to train military officers. Here, members of the ROTC band pose for a portrait in front of Woodburn Hall. Photo circa 1915-1925. 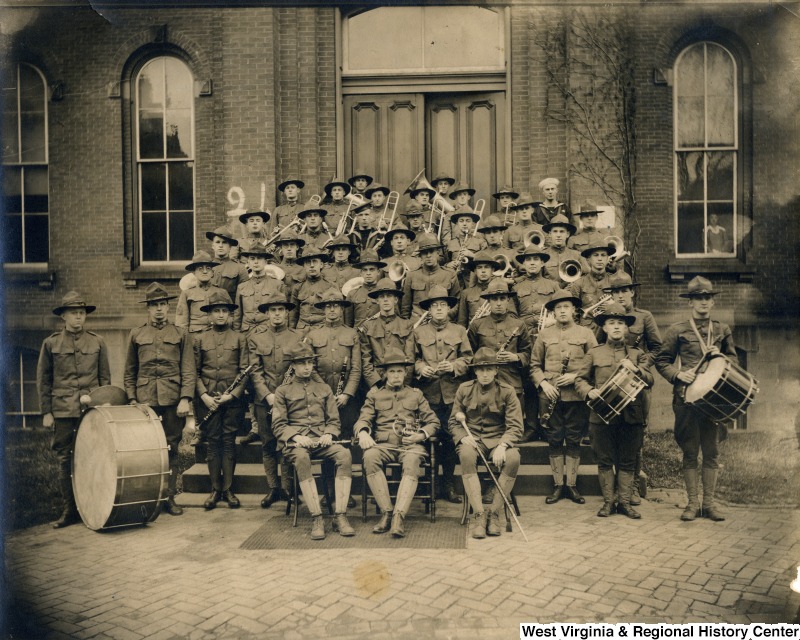 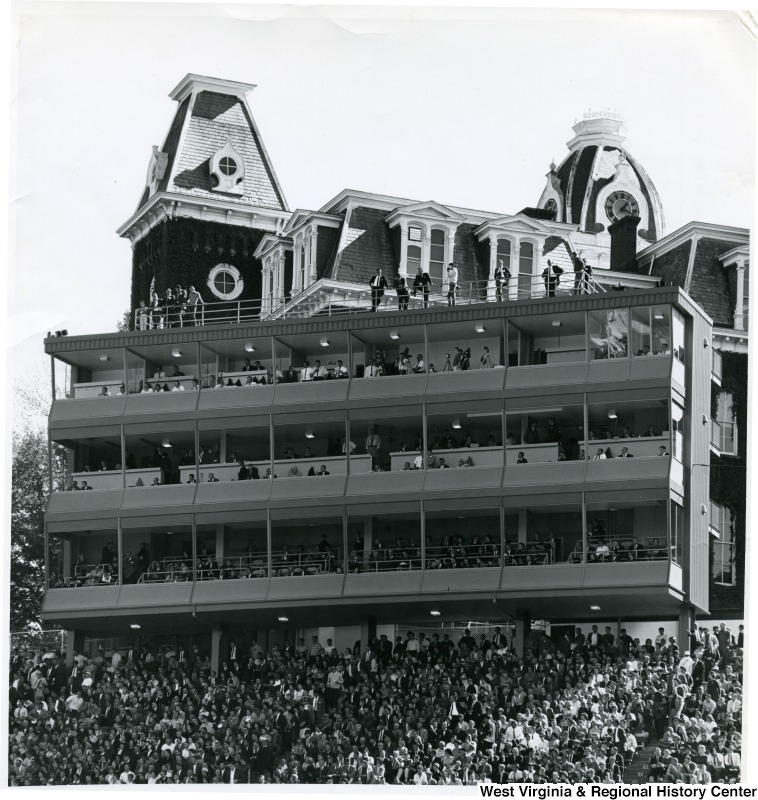 Woodburn Hall is often the star of WVU's promotional materials. The photo also shows Woodburn Hall covered in ivy, as it was for much of the twentieth century. 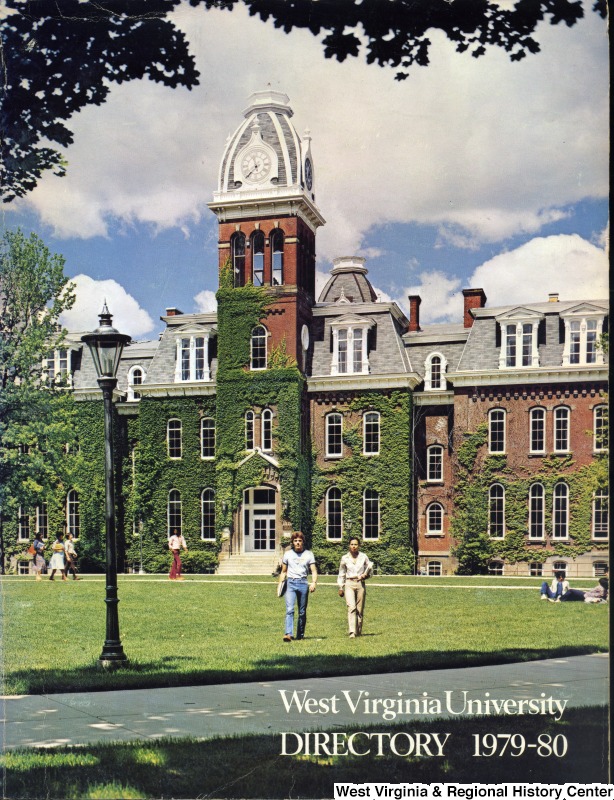 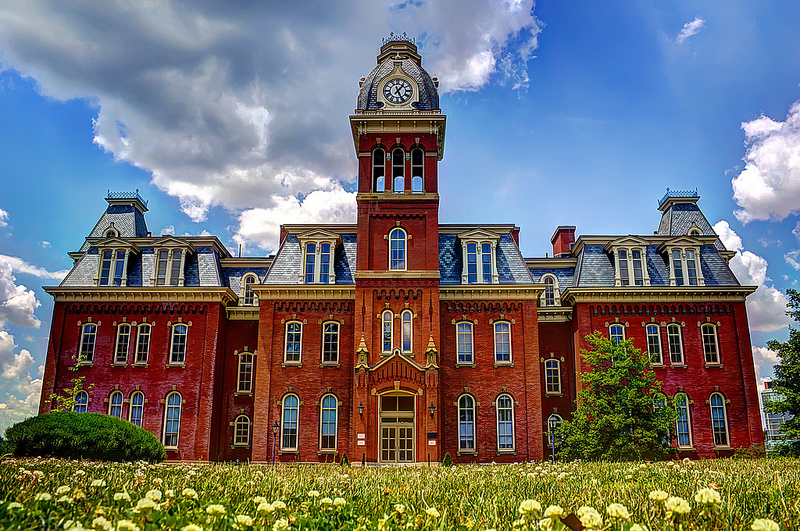 Woodburn Hall is decorated in holiday lights every winter. 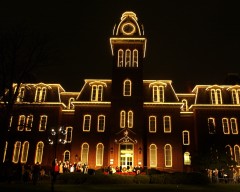 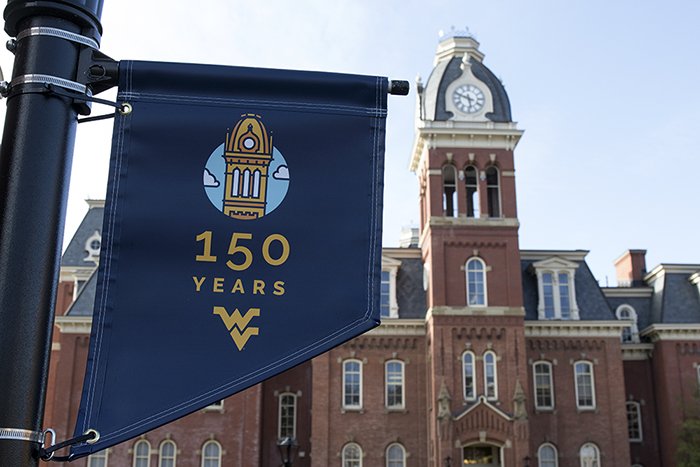 The name "Woodburn" was chosen by two of Morgantown's earliest advocates for education, Reverend John R. Moore, principal of the Monongalia Academy for boys, and Elizabeth Moore, principal of the Woodburn Female Seminary for girls. "Woodburn" is partly inspired by the main character in Sir Walter Scott's novel Guy Mannering. Woodburn also means "a streamlet by a shady glen," which reflects the beautiful wooded landscape and Falling Run stream near campus.

West Virginia University (WVU) was established in 1867 through the The Morrill Land-Grant College Act, which allowed the state of West Virginia to purchase land in Monongalia County, including the properties of the Monongalia Academy and Woodburn Female Seminary. WVU was founded as an all-male, all-white institution with six faculty members, six college students, and 118 preparatory department students. When students first began their studies at WVU in 1867, the price of education was far cheaper than what students pay today. The tuition for just a 13-week term was just $8.00.

After a fire destroyed the original Woodburn Female Seminary, the building that would become Woodburn Hall was completed in its place in 1876 for $41,500. It was named New Hall, then University Hall, before finally being named Woodburn Hall in 1902, to honor the former Seminary. The first women were admitted to the University in 1899, after a fire burned the Morgantown Female Seminary, which Elizabeth Moore opened after the Woodburn Seminary was sold to the state. It was a controversial move, as some argued women did not belong in a land-grant institution that focused on agriculture and technology. Female students formed a Women's League to advocate for their interests and share intellectual ideas. Although the University was coeducational by the end of the nineteenth century, it was still not desegregated. In the late 1930s and 1940s, the University accepted a few African American students into graduate programs not available at other Black colleges in West Virginia; the first undergraduate entered in 1950 under similar circumstances, seeking classes unavailable at Black colleges. After the Brown v. Board of Education ruling in May 1954, West Virginia's constitutional restrictions on race in higher education were no longer valid, and WVU accepted Black students into the summer session.

At the turn of the twentieth century, Woodburn Hall expanded as WVU added new departments and increased enrollment. The building's north wing was constructed in 1900 and the south wing in 1911. Woodburn Hall is built in the Second Empire architectural style, a style popularized in the United States after the redevelopment of Paris in the mid-nineteenth century. The most distinguishing characteristic is the Mansard roof, a four-sided, steep-sloped roof with windows that disguises an additional floor, which was first used in the Louvre in Paris. This style also inspired the Erickson Alumni Center found on the Evansdale campus. Woodburn Hall underwent renovations in 1979 and 2010 to preserve the building's architectural character and  structural integrity for generations of future students to enjoy. Students have enriched their minds through a variety of programs within the walls of Woodburn Hall, including military studies, agricultural sciences, and music. Today, it is fittingly home to the Department of History, along with the Department of Political Science.

Woodburn Hall has witnessed a number of historic events and traditions. The grassy lawn in front of the building has served as a space for countless outdoor class sessions, graduation events, military ceremonies, and political demonstrations. In 1970, for example, more than one hundred student demonstrators marched on Woodburn Hall in protest of the loss of life at Kent State University and invasion of Cambodia amid the Vietnam War. Between 1924 and 1987, Woodburn Hall also neighbored Mountaineer Field, WVU's football stadium, until the stadium was demolished. The Holiday Lighting Ceremony, which began in 1987, celebrates the holiday season and Woodburn Hall's beautiful architecture. With its bell tower found on promotional materials for WVU, including the 150th anniversary logo, Woodburn Hall stands as an icon to higher education.