Occupation of Morgantown during the Jones-Imboden Raid

The historical marker at this site commemorates Morgantown’s role in the Jones-Imboden Raid of 1863. Meant as both an attempt to prevent the formation of the new state of West Virginia and damage the infrastructure of the Baltimore & Ohio Railroad in the region, the raid arrived to the seat of Monongalia County on April 27, 1863 in the guise of a troop of Confederate cavalrymen led by Colonel Asher Harmon. Harmon left early the next morning to reunite with his commander General William E. Jones in the town of Independence twenty miles down the road in what is now Preston County, West Virginia. Their combined forces then returned to Morgantown with the intention of destroying the bridge over the Monongahela River. The Confederate capture of Morgantown prompted a more concerted Federal effort to counter the raid’s progress through the counties of western Virginia, an effort that culminated in the Battle of the Bridge on April 29 (the largest Civil War battle in what is now northern West Virginia). The marker commemorating Morgantown’s part in the raid is in Hazel Ruby McQuain Riverfront Park, which is open from 7 AM to 9 PM every day of the week. 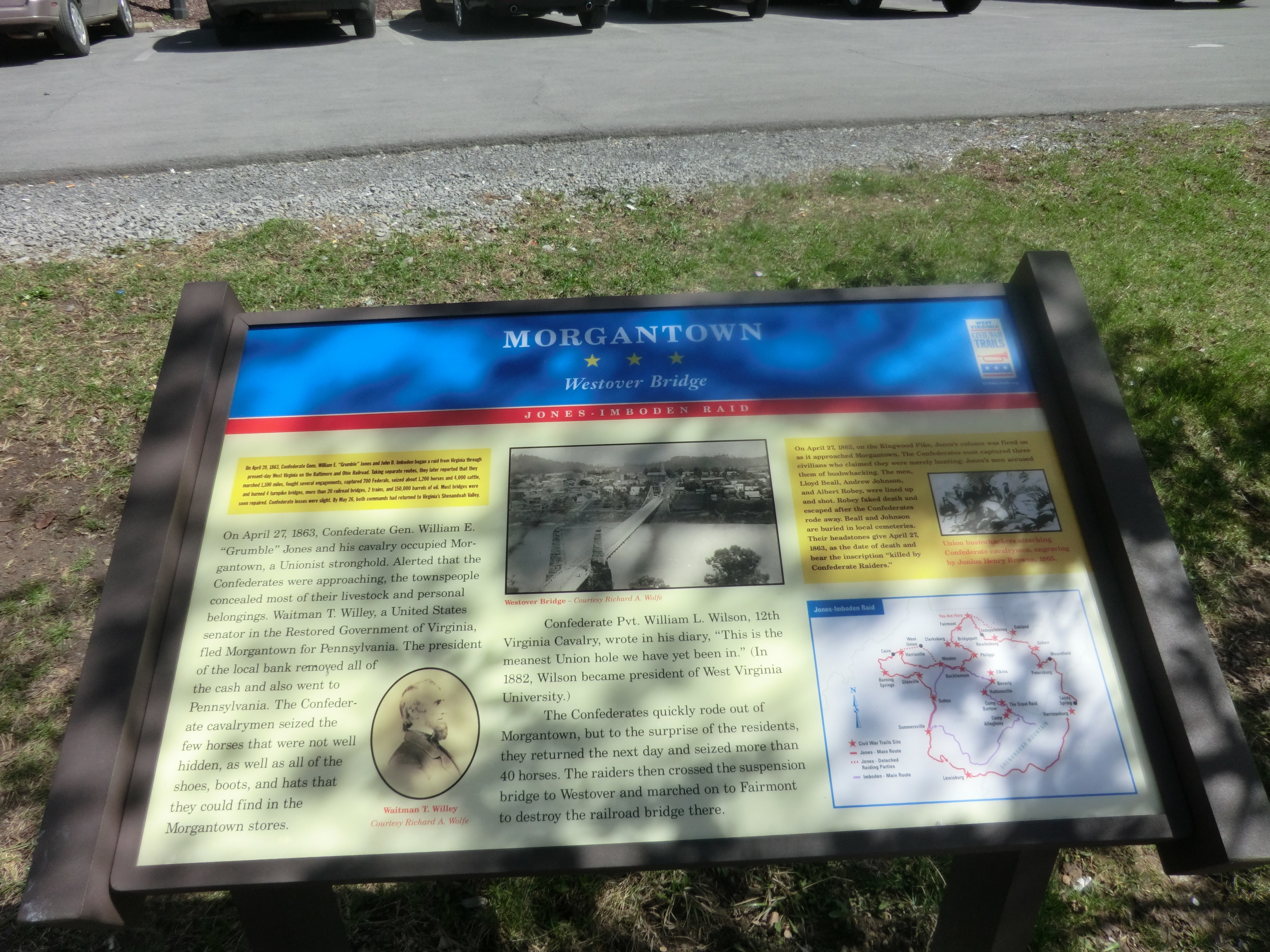 Volunteers for the Union Army gathering on High Street in Morgantown in 1861. 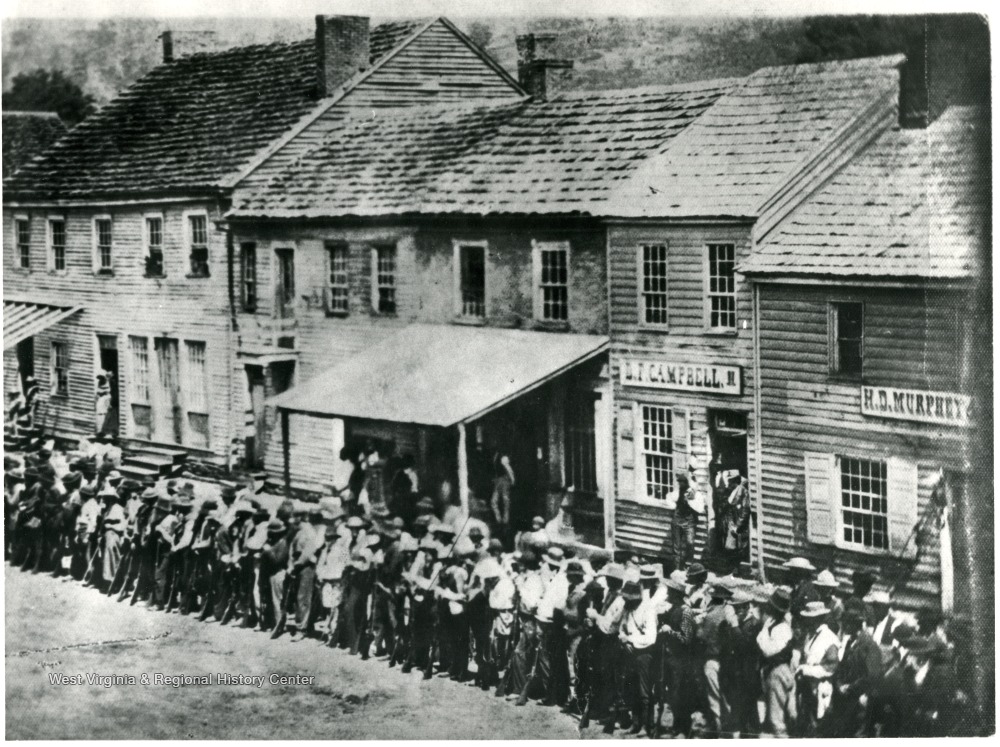 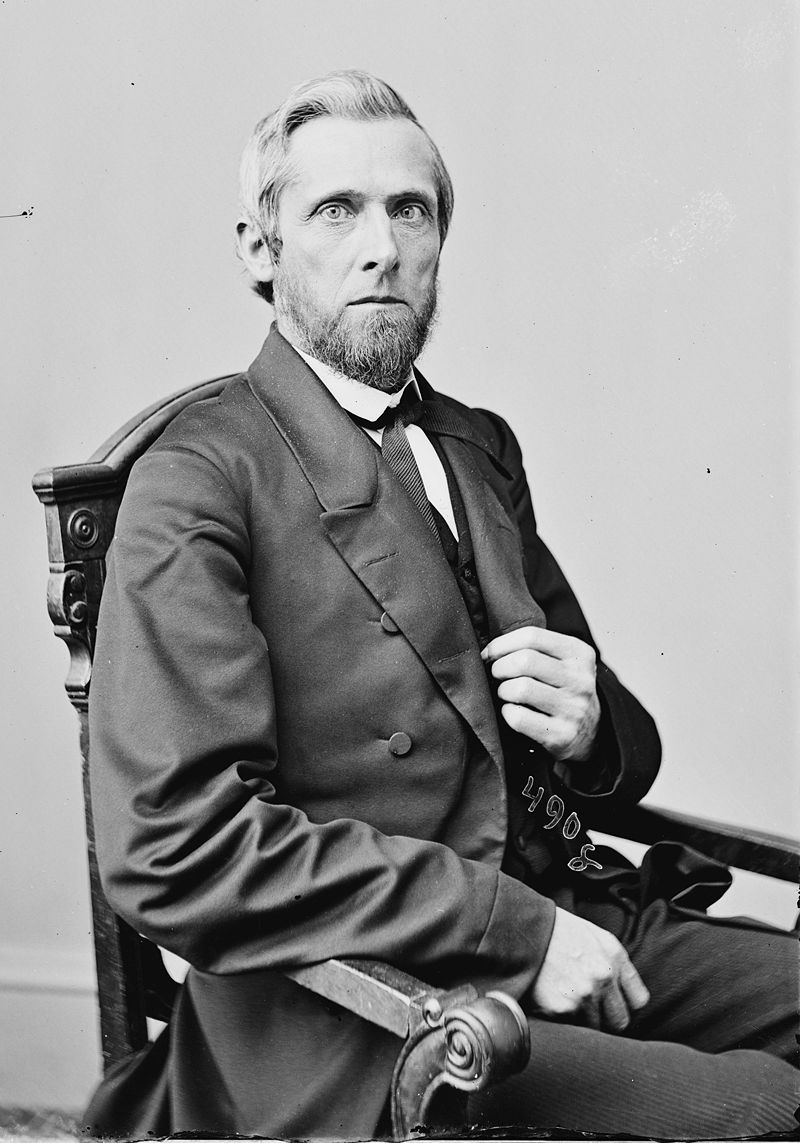 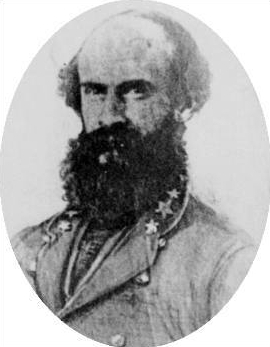 The Jones-Imboden Raid consisted of two main contingents. The first, under General John D. Imboden, marched from Staunton, Virginia on April 20 to what is now Beverly, West Virginia on April 24 before proceeding onwards to Buckhannon two days later for an intended rendezvous with the second column under General William E. Jones. While Imboden faced relatively little resistance along his intended route of march, Jones seemed to encounter nothing but difficulties. After setting out from Cootes’ Store near his headquarters at Lacey Springs, Virginia on April 21, Jones found the waters at his intended crossing point of the southern branch of the Potomac River in what is now Moorefield, West Virginia too high to ford. Marching from there to Petersburg, Jones discovered that the water level was, while low enough for his cavalry to cross, too high for his infantry and artillery. Ordering his infantry and artillery to return to Lacey Springs, Jones proceeded across the river.

With the loss of his infantry and artillery and the deaths and desertions of some of his cavalrymen during the crossing, Jones’ effective strength had gone from 3500 to 2200 men. With this much depleted force he went on to his next objective, the crossing of New Creek Mountain at the Greenland Gap, where he again faced difficulties on April 25, this time from a small force of Federal soldiers that caused the Confederates yet more casualties before winning the day. After the skirmish at the Greenland Gap, Jones split his forces on April 26. The main body under himself would move on to destroy the railroad bridge at Rowlesburg in Preston County while other contingents under Colonel Asher Harmon and Captain Edward McDonald would target the railroads in Oakland and Altamont, Maryland. Afterwards, they intended to rendezvous at Morgantown in Monongalia County.

For his own part, Jones encountered stiff resistance in Rowlesburg and was ultimately forced to withdraw his men from the area without destroying the bridge there. Likewise, while they faced relatively little difficulty in sabotaging the rails in Altamont on April 26, Captain McDonald’s small squad men faced a gauntlet of Unionist guerillas as they marched from there to Morgantown. The several hundred troops under Harmon, meanwhile, were able to progress relatively unopposed. After rounding up the company of Union soldiers guarding Oakland on the same day McDonald’s men reached Altamont, Harmon’s troops destroyed the turnpike bridge and railroad bridge over the Little Youghiogheny River there and proceeded westward to Cranberry Summit (now Terra Alta, West Virginia). There they encountered a defensive line manned by twenty local militiamen, which they easily overwhelmed, and moved on to Kingwood in Preston County on April 27.

Harmon found the town of Kingwood largely deserted. Many of its citizens stayed in their homes and went into hiding but a sizable portion fled on to Morgantown to warn residents there of the coming horde of Confederates, which they claimed numbered in the thousands. In response, many of the town’s most prominent citizens fled. Senator Waitman T. Willey left for Washington, D.C., while the president and cashier of the local bank together carried off their institution’s store of cash and hard currency. Much alarmed by these stories and their leaders’ flight, the remainder met to determine the best course of action, finally deciding that if there were less than 100 raiders they would make a stand to defend the town. Colonel James Evans of the 7th West Virginia Infantry, who was home on leave, offered to take ten volunteers and scout out the size of the invasion. He could only convince six men to accompany him, and with this group rode out southeast on the Kingwood Turnpike. One of his men, sent ahead, was quickly captured by an advance party of Harmon’s men, who then gave chase to the rest but failed in their attempt. Two of the Evans’ men, who had not actually seen the main body of Confederates, returned to town to warn their neighbors that the rebels were “numberless.”[1] The advance party of Confederates reached the outskirts of town soon after and sent two men in with a flag of truce, to whom the town promptly surrendered on April 27.

The eighty men of the advance party held the town until Harmon’s arrival at 5 PM, after which the Confederates began to search for food, supplies, and horses. Throughout their trek from April 26 to April 27, Harmon’s men had found particular difficulty finding the last item in particular, and Morgantown was no exception. Most often, the local residents from whom they attempted to requisition horses had received advance warning of their arrival and hidden their stock in nearby valleys and forests. Finding Morgantown similarly devoid of suitable mounts, Harmon’s men turned instead to their other wants and needs. The most sought-after item was boots, many of the rebels being barefoot. Discovering that most of the stores in the town had been closed and could not sell them that particular item, however, they rooted out the stores’ owners from their chosen places of hiding and forced them to reopen and accept worthless Confederate scrip for their troubles. Those owners the Confederates could not find had their stores broken into regardless. The rebel troops looted those establishments and sold anything they did not want at a reduced price to those of the town’s citizens who were willing to do business with them.

After waiting several hours for word of his commander’s approach to the appointed rendezvous, Harmon chose to evacuate the town at 2 AM on April 28. Throughout that time, the Confederate battle flag had flown over the Monongalia County Courthouse. As soon as Harmon’s men left, however, it was removed and the next morning the town’s residents proceeded to the trial of one of their neighbors accused of collaborating with the rebels. They were interrupted by the Confederates’ return, this time in the company of the soldiers under Jones and McDonald. The two commanders had met Harmon in the town of Independence in Preston County and Jones had chosen to advance once more on Morgantown to destroy the suspension bridge that crossed the Monongahela River there. Upon their return, the Confederates found that the residents had recovered their horses from their hiding places and promptly confiscated the lot. While Jones issued strict orders to prevent looting and even forced one of his men to return items paid for in U.S. currency, a number of his men managed to get their hands on some whiskey after his departure across the river. This no doubt complicated their own crossing of the river in Jones’ wake, since the bridge slipped off its supports and began to sway back and forth on its suspension cables as the last of the Confederates made it over. Considering the bridge sufficiently damaged, Jones ordered his men to put out the fire they had started on the structure and left Morgantown in the direction of Fairmont in Marion County.

Baylor, George. Bull Run to Bull Run: or, Four Years in the Army of Northern Virginia: Containing a Detailed Account of the Career and Adventures of the Baylor Light Horse, Company B, Twelfth Virginia Cavalry, C.S.A., with Leaves from My Scrap-Book. Richmond: B.F. Johnson Publishing Company, 1900.