The Hotel Morgan made its debut on October 16, 1925, as one of the most opulent hotels of its time. Its offerings included a grand ballroom and panoramic view of the downtown Morgantown area. Upon completion, the Monongalia Historical Society insisted that the new luxurious hotel be named after Zackquill Morgan, the founder of Morgantown. The Hotel Morgan has hosted many notable names, including Eleanor Roosevelt in 1934, former President Harry Truman in 1954, and was a campaign stop for John F. Kennedy during the 1960 presidential election. Hotel Morgan was renovated in 1999 by replacing the outdated 1970s decor and restoring the hotel to its former 1920s glory. A more recent renovation in 2020 has attempted to modernize the hotel. Despite numerous changes, the exterior of the Hotel Morgan has changed extremely little over the years and is an iconic fixture of the Morgantown skyline.

The original Hotel Morgan during the construction process, 1925 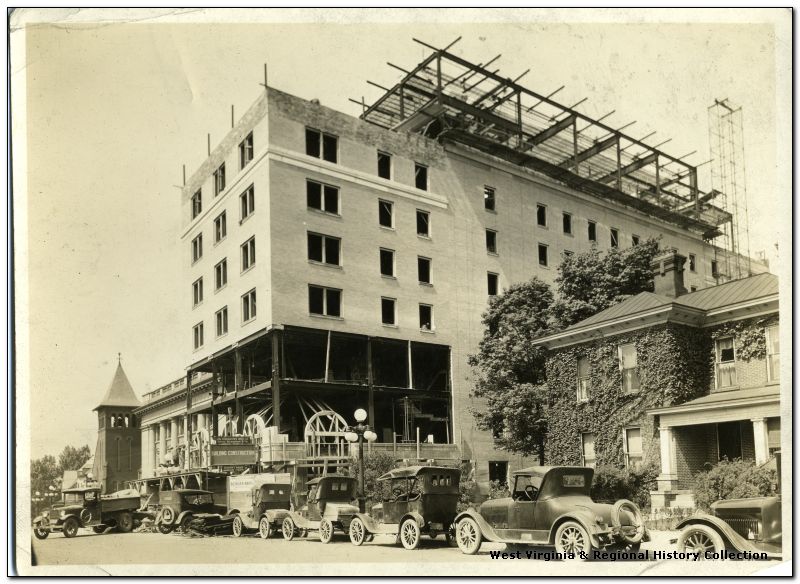 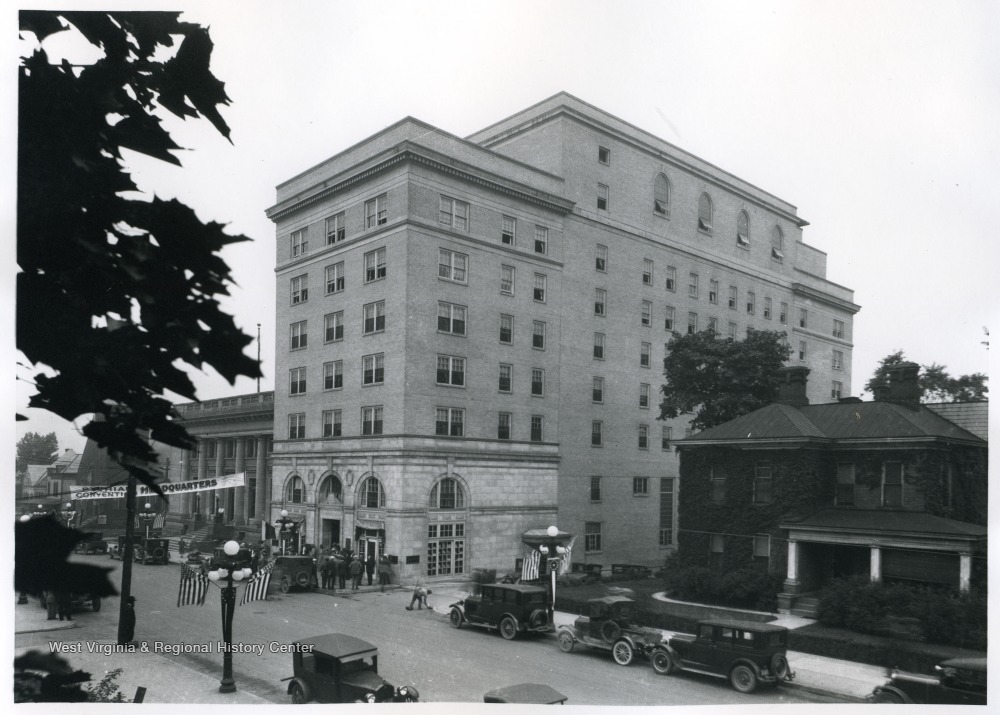 Image of the original ballroom 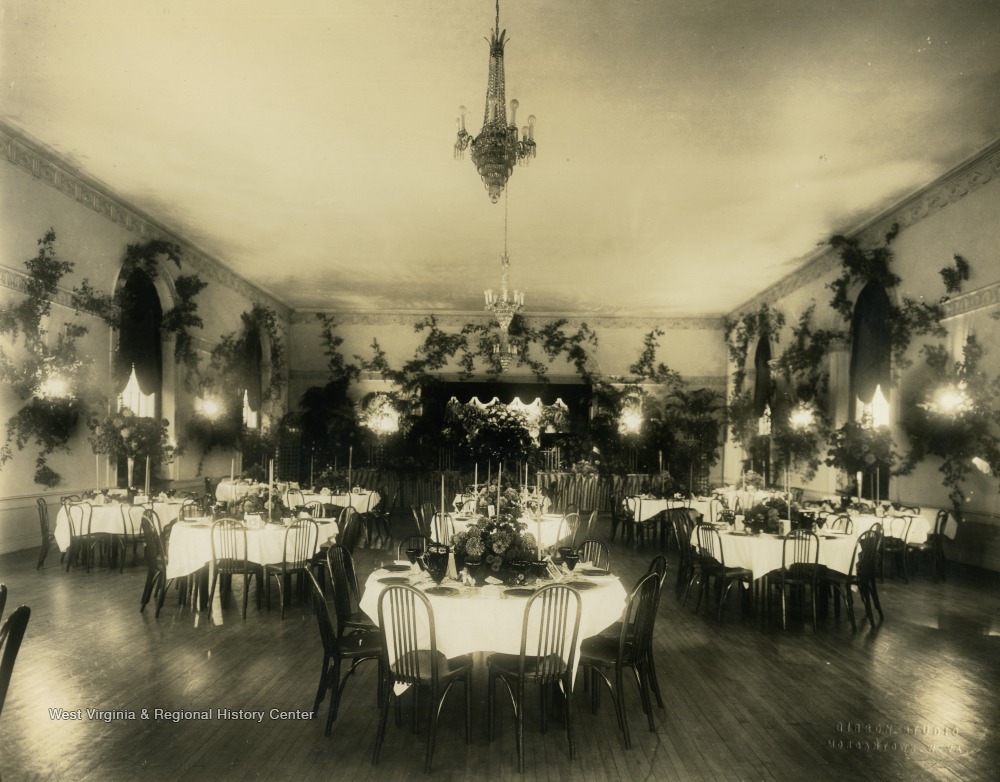 Eleanor Roosevelt in front of the hotel, 1934 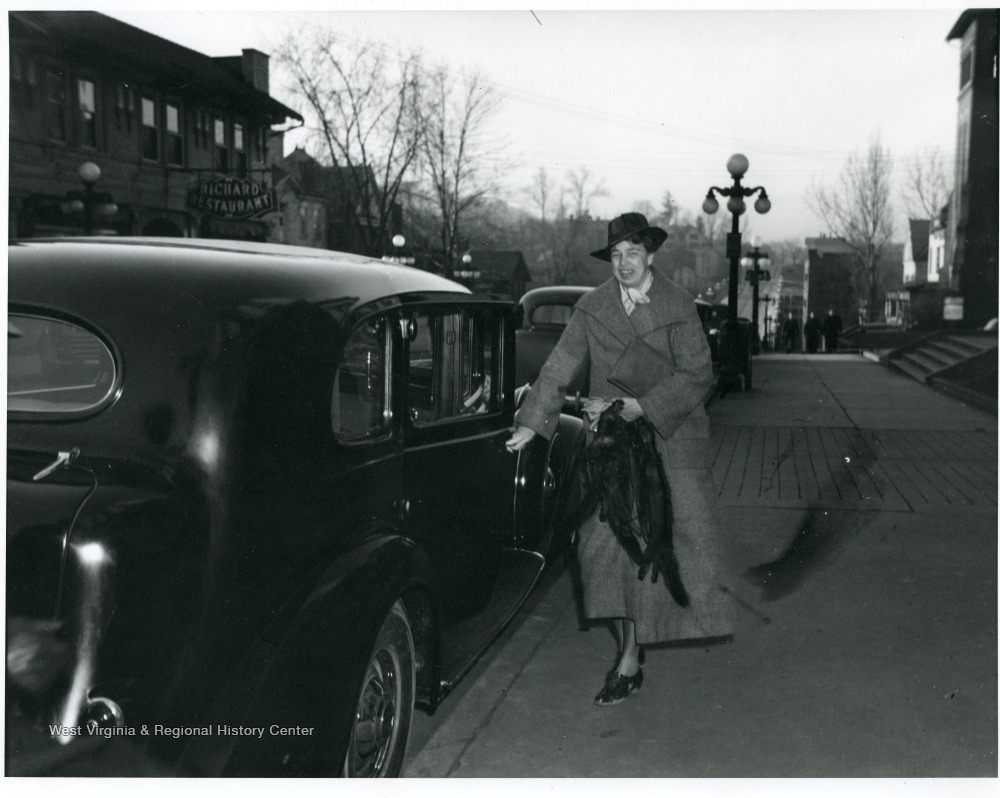 President Harry Truman greeting a couple in the hotel, 1954 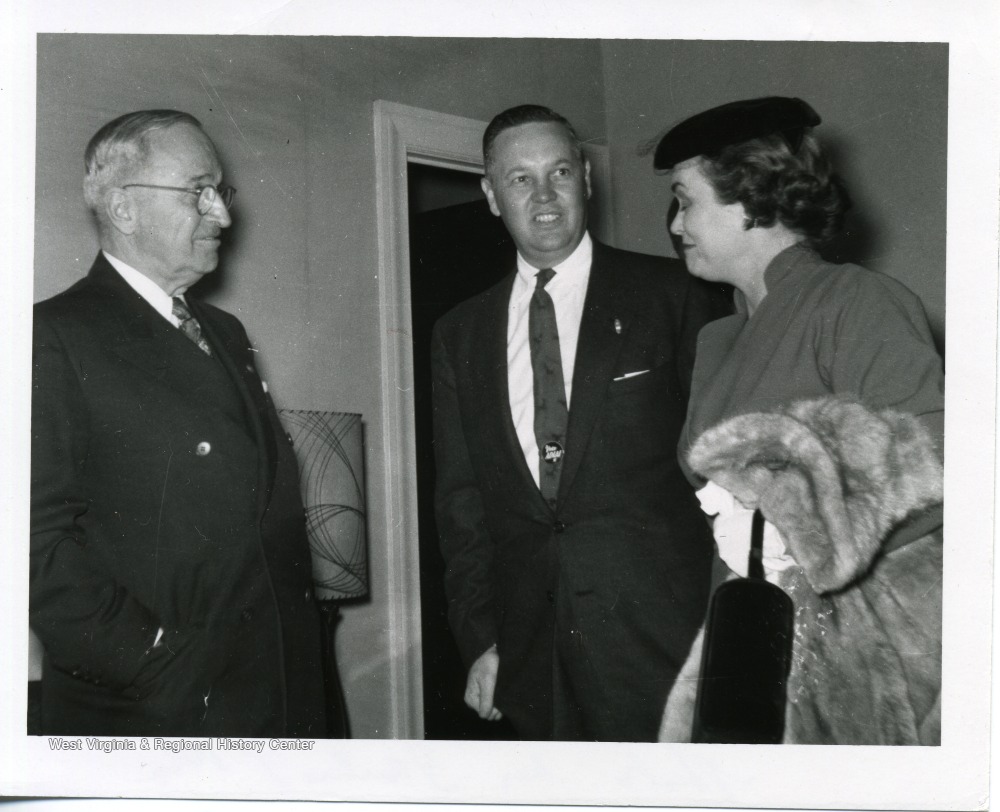 An orginal guest receipt from 1965 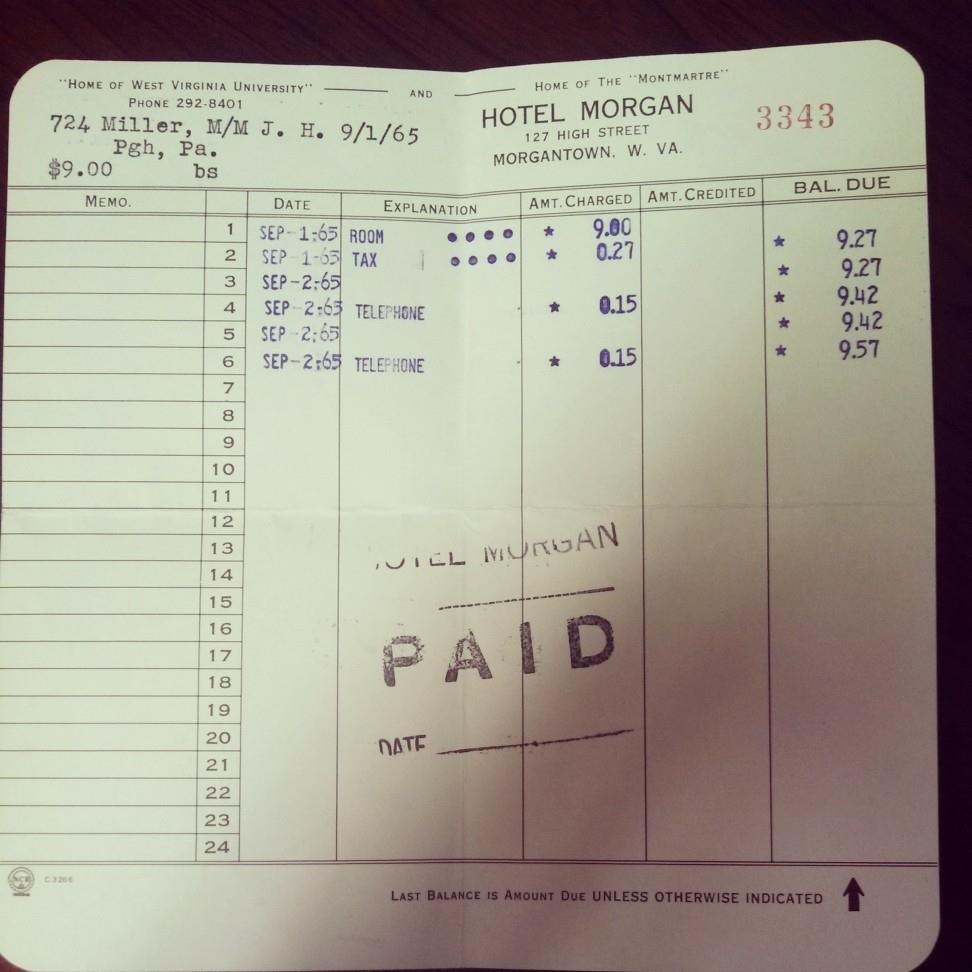 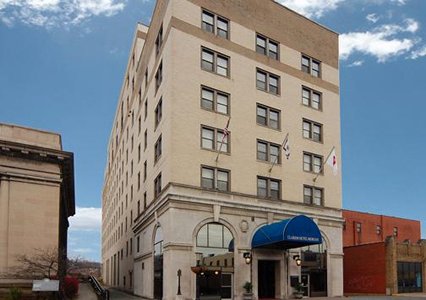 In 1922, the Morgantown Hotel Company was formed and immediately began plans for a new luxury hotel in its namesake town. Construction on the building near the end of high street began on January 15, 1925 and was completed October 16 of the same year. The Monongalia Historical Society was responsible for the name of the hotel. They requested that it be named after Morgantown’s founder and first lodging provider, Zackquill Morgan. The request was honored, and the new building was christened the Hotel Morgan.

When the doors were opened in October, the Hotel Morgan was considered one of the grandest hotels in all of West Virginia. The tiered structure is seven stories near the entrance, rising to nine stories at the back. Even today, the Hotel Morgan towers over the rest of downtown Morgantown’s buildings. A steel frame supports the primarily brick and concrete structure. The construction of the hotel made it largely fireproof, a point of pride touted in advertisements. Albert Pick and Company – a Chicago based interior design firm specializing in hotels – took care of all interior decorating. No expense was spared and the hotel was decked from floor to ceiling in imported materials and fixtures.

In addition to 152 guest rooms, the Hotel Morgan also included a beauty salon and barbershop, coffee shop, and dining room. 320 phone lines allowed for easy long-distance communication, and mailing facilities were also available on each floor. The Warner and Metropolitan Theatres were in close proximity to the Hotel Morgan, providing upscale entertainment to match the accommodations. The hotel was known for local community gatherings, such as the Lion's Club, the Kiwanis, high school dances, various fundraisers, and business conventions.

In 1934, the Hotel Morgan hosted the first of several particularly famous guests when First Lady Eleanor Roosevelt visited. Roosevelt stayed in the hotel during her visits to Scotts Run and Arthurdale. In 1954, former President Harry Truman visited the hotel shortly after the end of his term. Finally, John F. Kennedy visited Morgantown in 1960 while serving as a senator and democratic presidential nominee hopeful. He attended a brief reception in his honor in the Hotel Morgan ballroom and addressed the gathered crowd of supporters.

By the 1980s, chain motels had spelled the demise of many grand hotels all over the country; likewise, the Hotel Morgan had suffered from a lack of maintenance and upkeep despite its illustrious pedigree and famous previous guests. In 1999, the hotel was sold to R. Ted Brant and went through a complete remodel and restoration process. The ballroom's two-story ceilings and the balcony overlook were restored. The smaller original guest rooms were combined and converted to suites with the color scheme of gold and blue. The renovations incorporated a full-service restaurant on the 8th floor, The Montmartre, offering beautiful panoramic views of the downtown Morgantown district.

Another restoration of the Hotel Morgan occurred in late 2019 through 2020. All original furnishings, items, and furniture were sold in preparation for the redesign. In addition, the entire hotel was completely rewired. The Montmartre closed at this time, though plans for a new rooftop space are being made. Despite the inside of the Hotel Morgan being renovated, restored, and renovated again, the exterior has changed extremely little. Even the current redesign plans to keep the iconic “Hotel Morgan” neon sign that was added circa 1965-1975 and is visible from all over Morgantown. The Hotel Morgan is one of the most instantly recognizable buildings downtown Morgantown and an important piece of local history.