Item 12 of 27
This is a contributing entry for Historicizing Heritage and only appears as part of that tour.Learn More.

Serving as a backdrop of White Hall's G-21 lecture room, you will find a beautiful mural that was produced from 1940-42, for the then Mineral Industries Building. Robert Lewis Lepper, prominent artist, designer, and sculptor from Pennslyvania, created “Study for the Mural at Mineral Industries Building, West Virginia University,” which abstractly highlights American industry. The mural incorporates Lepper's unique artistic approach while complementing the modern style of works created during the New Deal.

Lepper's mural at WVU chronicles the extraction and processing of West Virginia's raw materials, including coal, gas, ceramics, and glass. 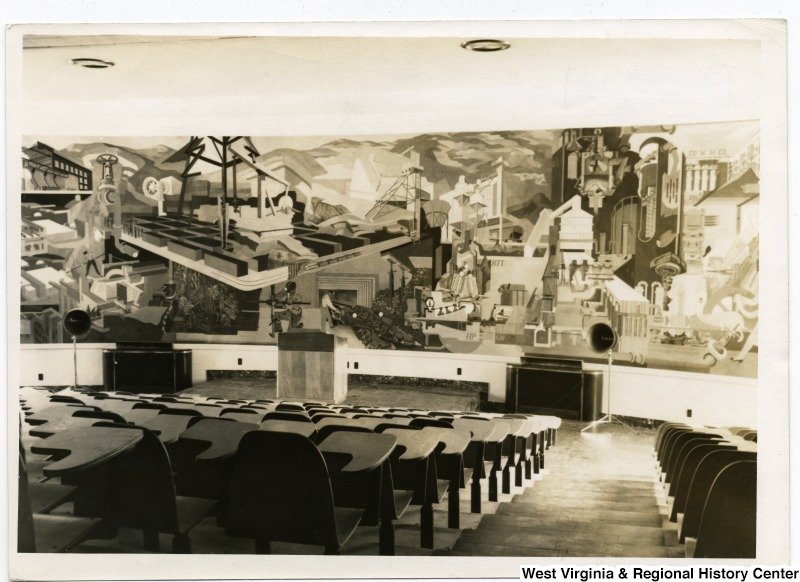 Born in 1906 in Aspinwall, Pennsylvania, Robert Lepper graduated from the Carnegie Institute of Technology (now Carnegie Mellon University) in 1927. Lepper continued his studies in Europe focusing on Bauhaus design, a unique artistic approach developed in Germany that blended the fine arts, crafts, and architecture.  He returned to the United States as an instructor at CIT, where he helped establish the country’s first industrial design program in 1934. Lepper It was also at CIT that Lepper taught a student by the name of Andy Warhol from 1945 to 1949. According to Carnegie Mellon’s archives, Lepper “believed in letting students be independent thinkers and use their own creativity.”

Lepper created the mural at WVU in a turbulent time in American history, the Great Depression. Yet during this time, the United States saw a flourishing of the arts under Franklin D. Roosevelt’s New Deal. To put Americans back to work, the federal government initiated a number of arts-related programs. The Federal Arts Project (1935-1943) under the Works Progress Administration is the best known of these programs, which produced some 200,000 works of art and established over 100 community art centers. The Federal Arts Project, however, was preceded by the Treasury Department’s Section of Fine Arts. Originally called the Section of Painting and Sculpture, the Section of Fine Arts (1934-1943) employed hand-selected professional artists to create works of art in federal buildings, unlike the Federal Arts Project, which served as a relief program. Lepper was among the artists chosen to create murals in Grayling, Michigan and Caldwell, Ohio post offices.

From 1940-1942, West Virginia University had the honor of receiving one of Lepper’s murals. WVU commissioned Lepper to depict the state’s history of industry in the new Mineral Industries Building (now White Hall). Lepper’s mural is divided into five areas depicting coal and gas, trade techniques, glass and ceramics, operations that put the finishing touches on manufactured items, and the final commercial products.

Lepper was instrumental in the field of industrial design and taught at Carnegie until his retirement in 1975. In 1989, the Industrial Design Society of America awarded Lepper with their esteemed Educator award. His mural at WVU was recently restored and is displayed in White Hall’s G-21 lecture hall. A copy of the mural also hit the big screen in 2004, when it appeared as a backdrop of Spider Man 2. A consultant for the film discovered the mural in the Brooklyn Museum’s book The Machine Age in America, 1918-1941 and found it to be the perfect WPA-style piece for a bank in the movie