The Lincoln Way Arch in downtown Chambersburg shows that the Capitol Theatre is built in a town with historical significance. Photo Courtesy of Lincoln Highway Heritage Corridor. 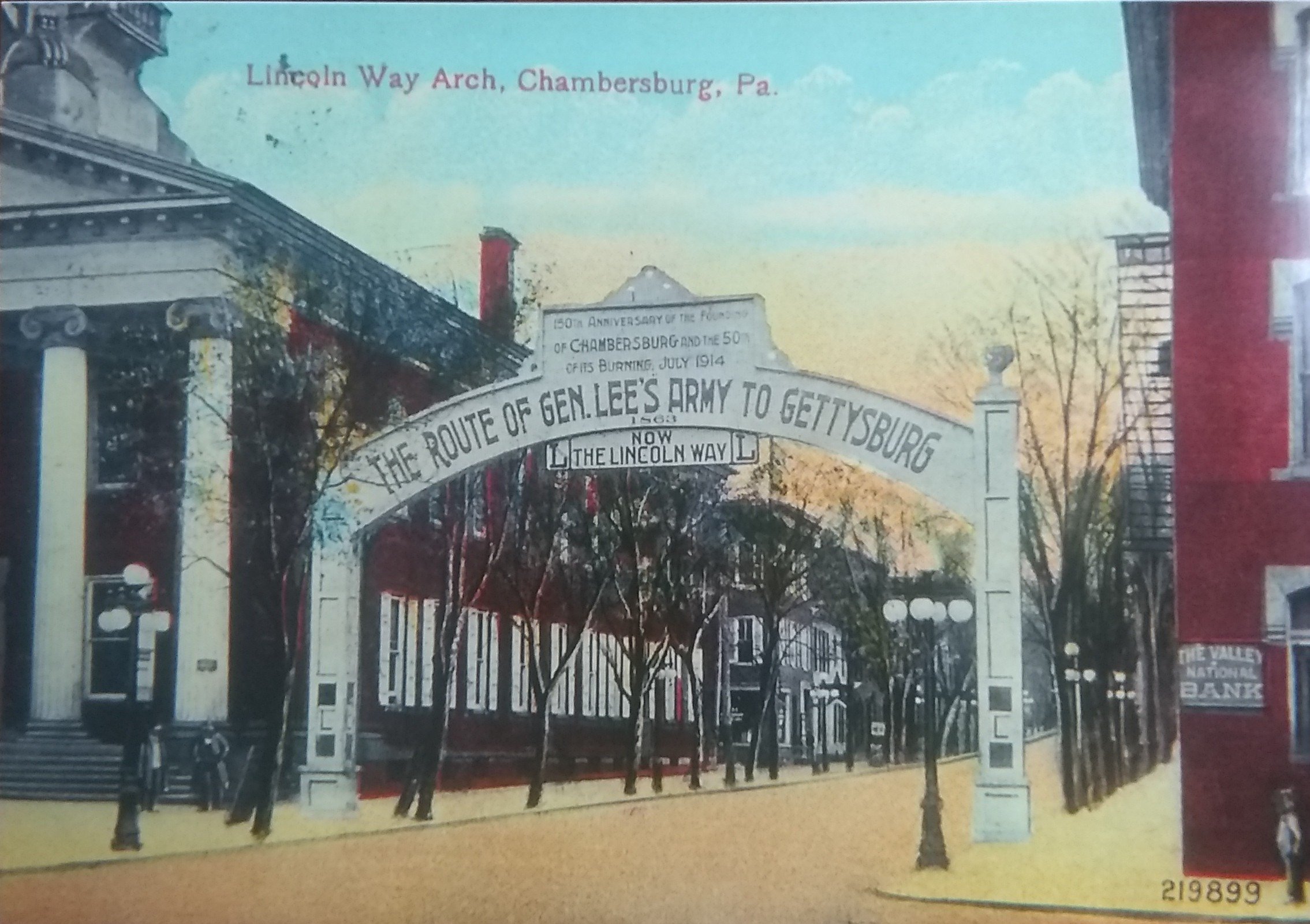 The Memorial Square was part of Diamond Park, which was created by Benjamin Chambers, and the square indicates how the customs of the 1920s influenced the creation of the theater. Photo Courtesy of Lincoln Highway Heritage Corridor. 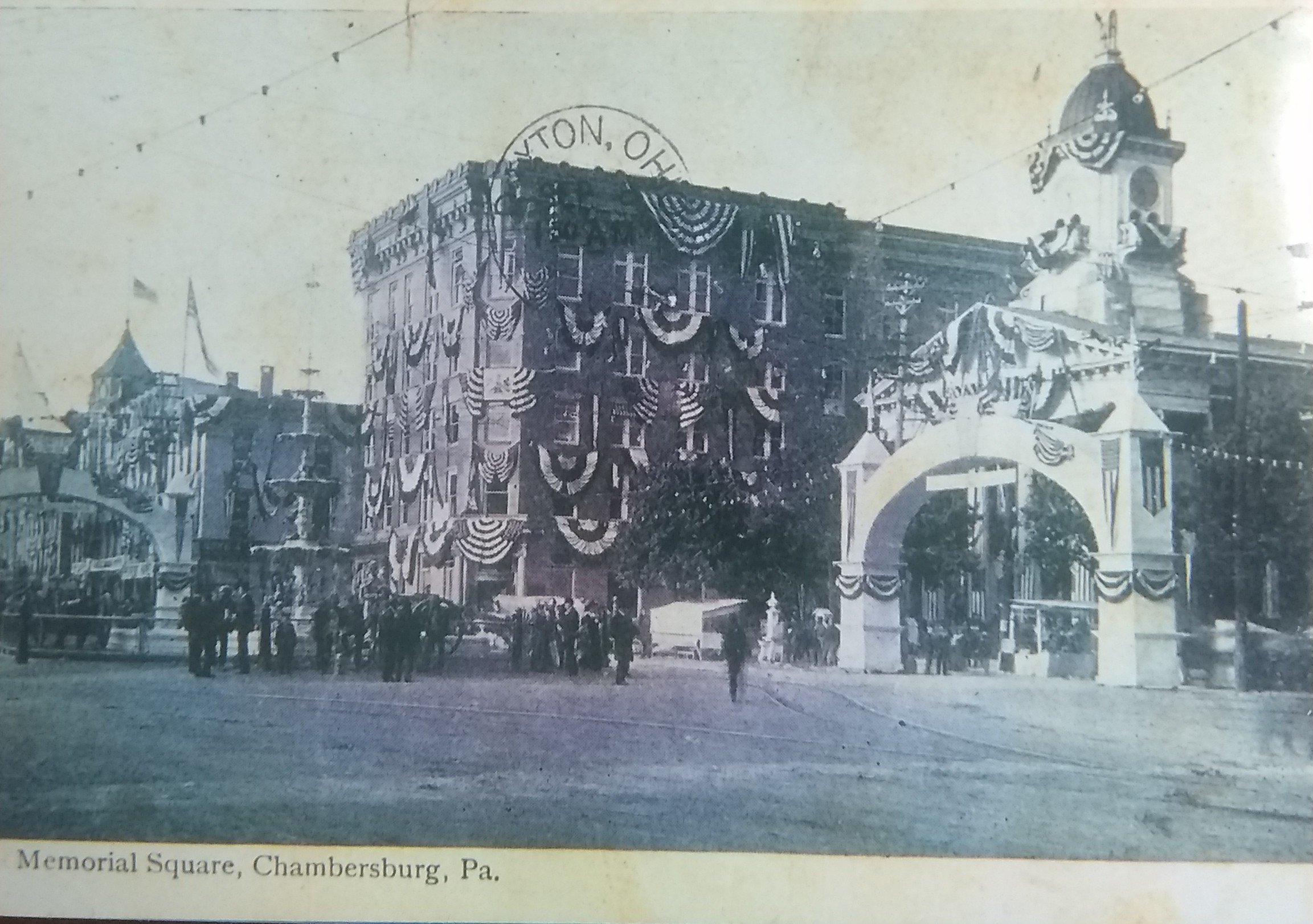 The original front of the theater is a testament to the people’s timeless values of etiquette and civility in society. Photo Courtesy of Lincoln Highway Heritage Corridor. 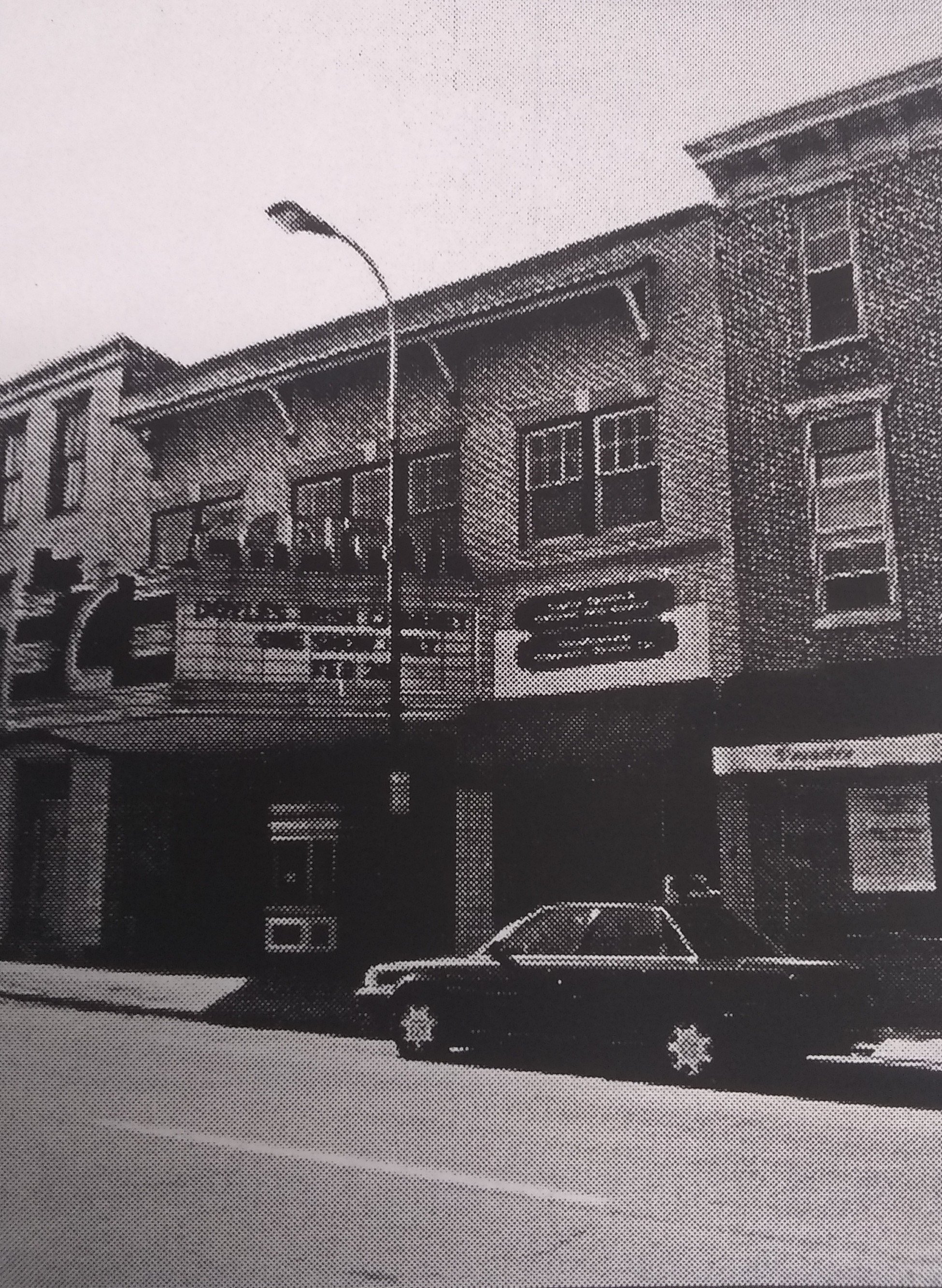 Many visitors today enjoy watching classic entertainment in an auditorium that reflects the beautiful and charming styles of the traditions from the past. Photo Courtesy of Charles Armstrong, Capitol Theatre Center. 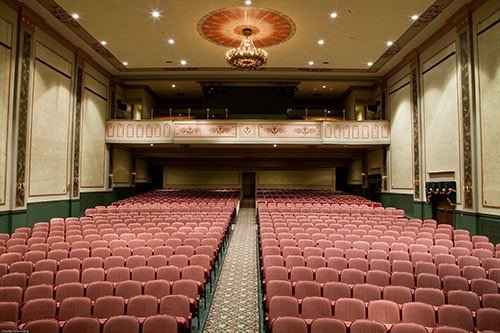 The modern-day front of the Capitol Theatre shows the old-fashioned ticket booth where people still purchase show tickets, and the front shows the theater’s endurance through the passage of time. Photo Courtesy of Smallbones, Wikimedia Commons. 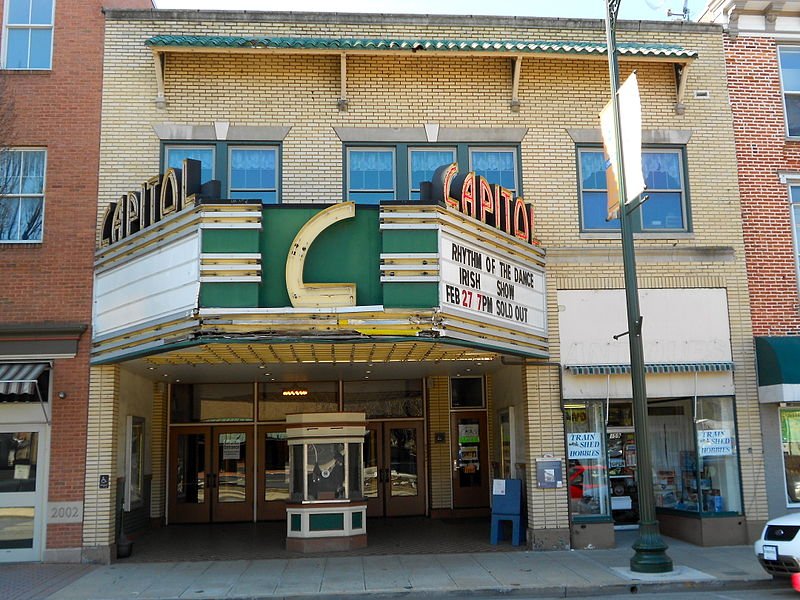 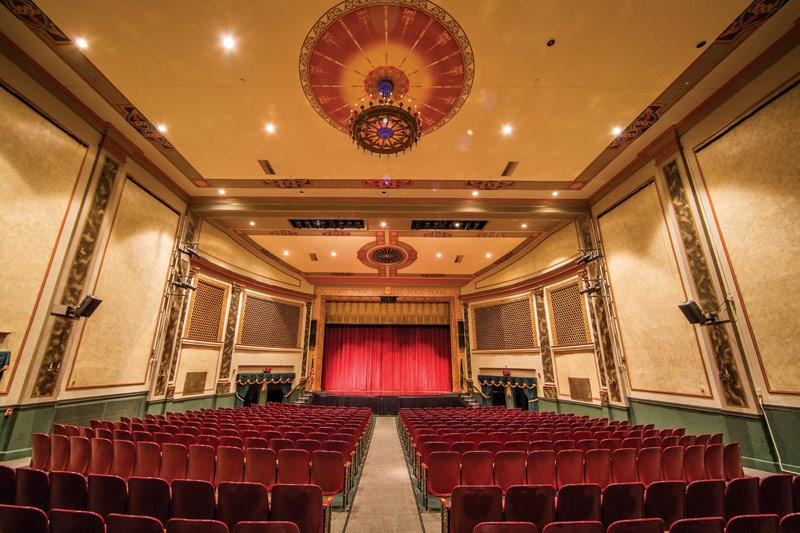 Today, the Capitol Theatre is situated in the middle of downtown Chambersburg, PA. The Capitol Theatre was founded by the Pottstown Theatre Company on February 3, 1927 as a movie house and performing arts theater for the local community.1 It opened in grand fashion, with a showing of the comedy film “The Waning Sex” and an organ recital by local organist Wilfred Binder.2 During the mid-20th century, the Capitol Theatre showed famous movies starring John Weissmuller as Tarzan and Roy Rogers as a star cowboy.3 Eventually though, time took its toll over the theater, and it needed to undergo serious renovations. Hence, starting in 1996, the Capitol Theatre underwent a seven-year reconstruction project to improve and to expand the original structure of the building.4 On June 6, 2003, the theater was completely restored, and it was expanded with the new Wood Center Stage Theatre (a multi-purpose room for theatrical events) to complement the historic stage.5

The current mission statement of the Capitol Theatre is to enrich the cultural environment of Chambersburg and provide a service for a broad constituency of patrons, which includes tourists.6 To provide a great service, the Capitol Theatre is designed in an Italian Renaissance style by Gibelli. The curtains for the stage are made with rich and luxurious fabrics, and the theater's railings are made of elegant mahogany wood.7 Beautiful crystal light fixtures and a shiny chandelier hang from the intricately pattern ceiling of the theater.8 Also, there are blush and green panels of faux marbling displayed in the theater, and gilded ornaments run along the theater's walls.9 So, one can see that this theater is a big testament to people’s admiration for the beautiful cultural traditions of Chambersburg.

The Capitol Theatre is related to the general history of Chambersburg, PA. The town of Chambersburg was founded in 1732 by Benjamin Chambers, an Irish immigrant. He helped create the Diamond Park as a central place of the community, where people can meet with one another and perform the local business of the day.10 However, the town of Chambersburg was burned down in 1864 when the townspeople refused to pay a $100,000 gold ransom to the Confederates.11 The fire destroyed 550 buildings, including homes, and so it left over 2,000 people homeless.12 The destroyed buildings also included 266 businesses that were valued at $783,950.13 As a result, the townspeople had to rebuild their city from scratch. They did not have enough time to create places of entertainment, such as the Capitol Theatre. Instead, the people of Chambersburg needed to focus on rebuilding the essentials for life, such as homes and grocery stores. After all the essentials were rebuilt, employees of Cumberland Valley Railroad worked hard to create trains so that everyone can travel more efficiently and faster to get to places, such as the Capitol Theatre.14 Thus, the Capitol Theatre was built due to the cultural atmosphere of the time in Chambersburg. The theater provided people a relaxing break from work and a way to forget the harsh reality of life. The Capitol Theatre satisfied the recreational interests of the townspeople, who had no other major forms of entertainment to enjoy at the time.

The Capitol Theatre is very significant to the Pennsylvania portion of the Lincoln Highway. The Lincoln Highway in Pennsylvania was created to make traveling easier and more efficient, which helped bring more visitors to the local towns of PA (e.g., Chambersburg). As a result, the highway helped facilitate a vibrant cultural atmosphere in Pennsylvania where visitors learned about the history of the region and embarked on fun tourist adventures. In addition, the Lincoln Highway aided the growth of many businesses, such as Keefer’s Restaurant and the White Cottage Inn, because many visitors wanted to buy souvenirs or needed a place to eat and stay during their vacations. Keefer’s Restaurant served tourists delicious steak, chicken, soup, and waffles, and it had gas pumps as well as a garage so that tourists could get car service.15 Similarly, the White Cottage Inn had several cabins where tourists could sleep overnight.16 So, the Capitol Theatre was built on the Lincoln Highway to cater tourists who were visiting the landmarks along the highway. The Capitol Theatre’s films and shows provided many happy and life-long memories for the tourists, such as a first date.17

The Capitol Theatre is related to the history of theater in the United States during the 20th century. The European styles of theater gave much inspiration to the designs of American theaters. Joseph Urban, a Viennese production designer, was hired to create scenic and simple murals for the Boston Opera Company.18 Also, Robert Jones designed a stage that expressed the sentiments of European home life for a drama play called The Man Who Married a Dumb Wife.19 Furthermore, drama programs were introduced into many U.S. colleges, which greatly influenced the creation of American theaters. Professor George Baker taught playwriting at Radcliffe College, and Professor Thomas Stevens established the first theater degree program in the U.S. at the Carnegie Institute.20 Thus, the Capitol Theatre was established due to the large European influence on the American theater. The people in Chambersburg wanted to partake in the same cultural events as everyone else in America was experiencing at the time. The Capitol Theatre showed that there were many people who wanted to watch the art of theater as well as act in theater plays.

The Capitol Theatre is still historically significant today, and it matters to locals and visitors who attend the theater’s shows and performances. The theater reminds people what the entertainment industry in America was like during the 20th century, where people used to pay only 25 cents for a movie ticket and only 10 cents for a bag of popcorn.21 Similarly, the theater reminds visitors that people in the 20th century only watched films on movie projectors and not on smart phones or flat screen TVs.22 In addition, the Capitol Theatre makes people feel nostalgic because they seem to be transported back in time when seeing the 1930s colors of pink, dark green, and maroon.23 Moreover, the Capitol Theatre is an important cultural site for everyone because all people, especially children, can experience for the first time classic musical plays, such as “The Four Freshmen” and “The Best of Broadway."24 Also, at this theater, people want to see talented performers, such as the Chambersburg Ballet Theatre School, act out classical renditions of entertainment, such as “Sleeping Beauty” and “The Nutcracker."25 Finally, everyone realizes that the Capitol Theatre has a big impact on society because the theater is seen as a local and rare gem, which has unique European designs that are not found in many other American places.26 In conclusion, the Capitol Theatre is an entertainment center that provides all visitors an opportunity to learn and experience the rich cultural traditions of a small and quaint town.

This entry has been edited 45 times.