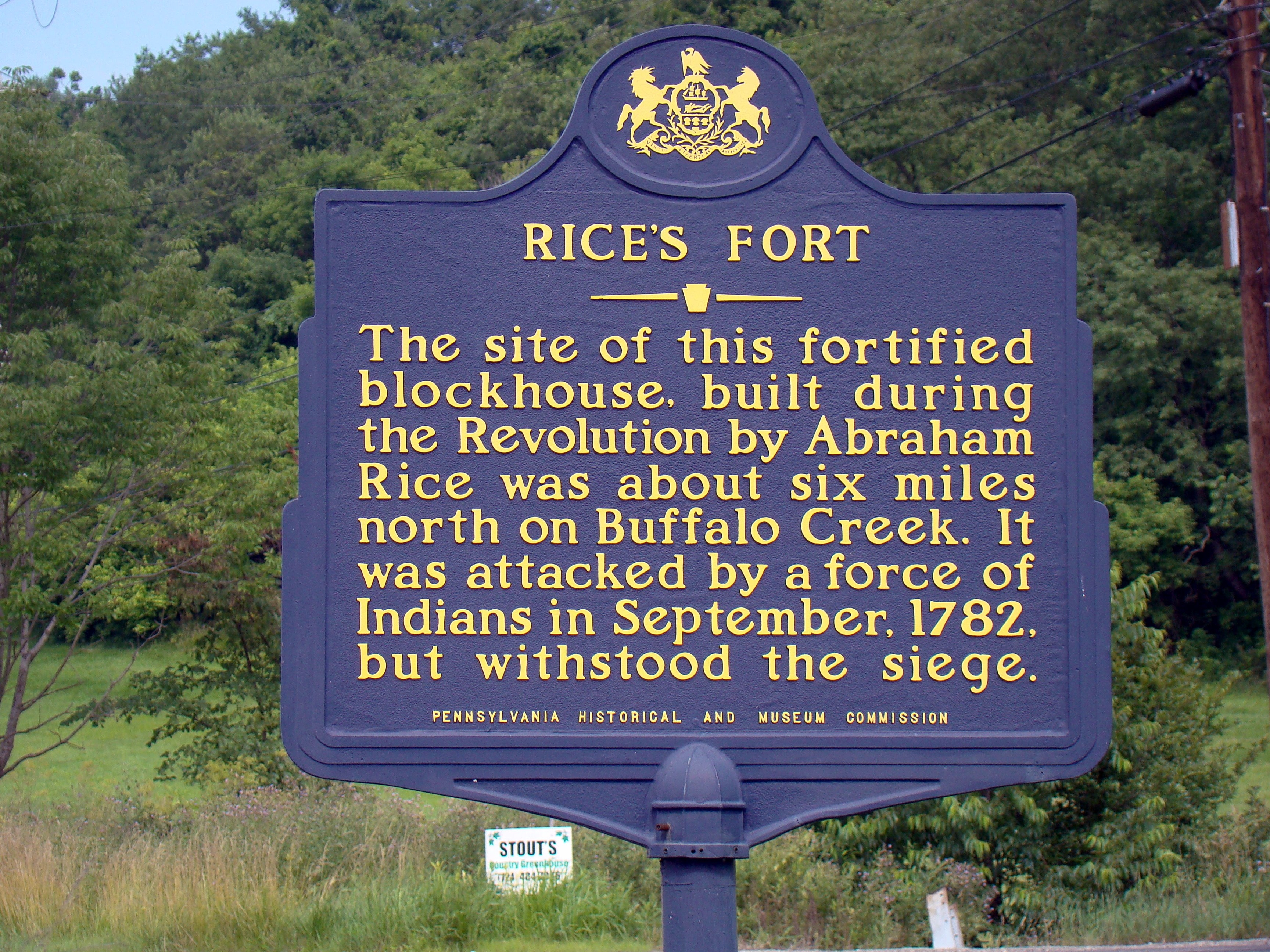 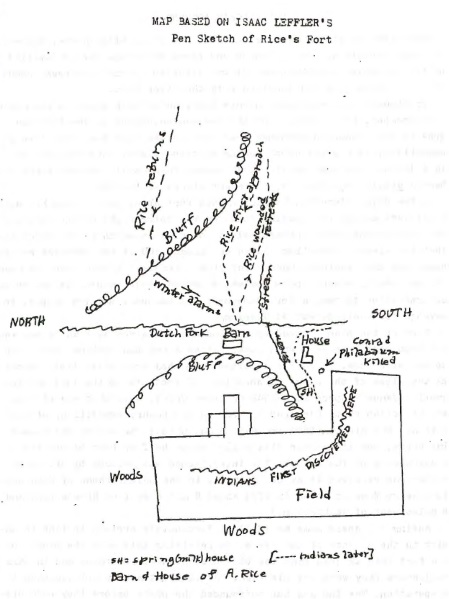 Reconstruction version of Rice's Fort, used during a 2017 reenactment 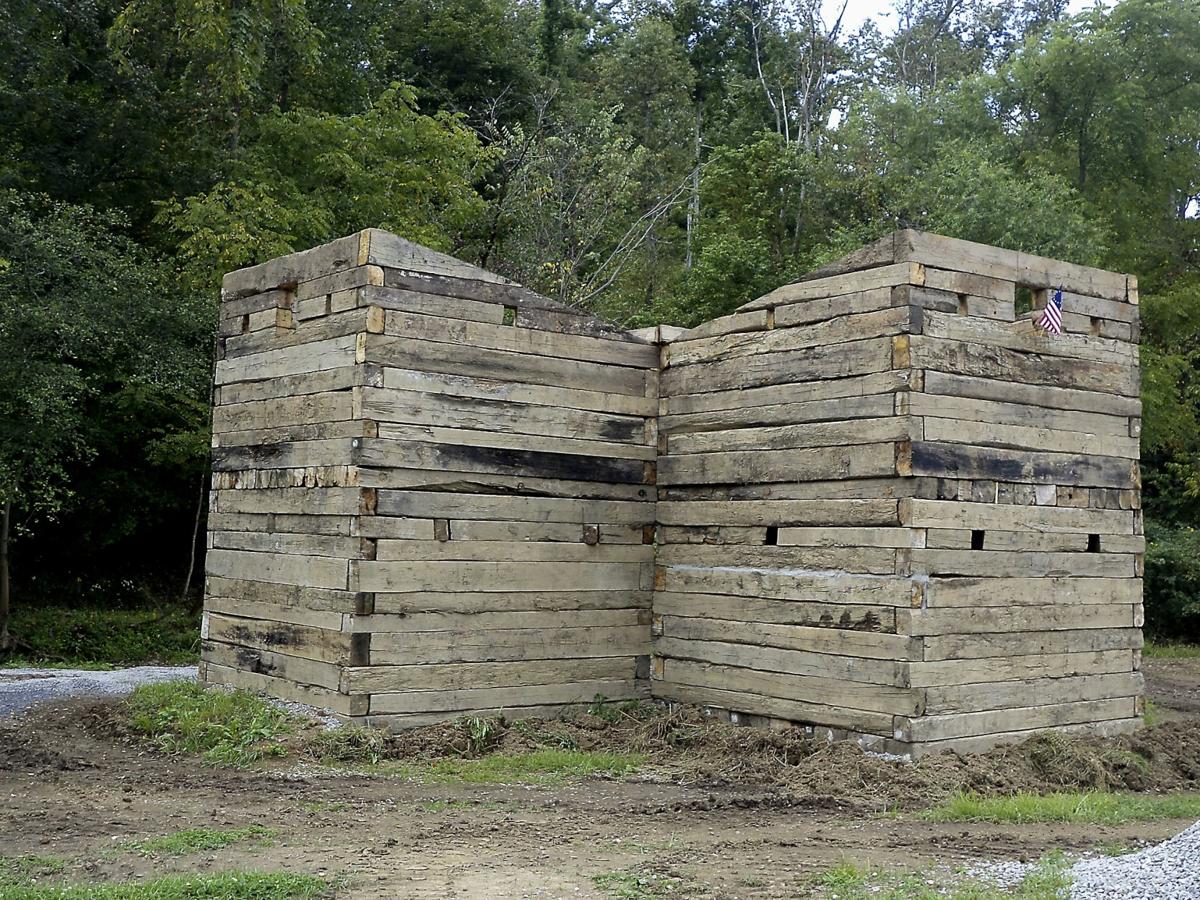 During the American Revolution, the Pennsylvania and Virginia backcountry simmered with violence between white settlers and Native Americans. Ohio Valley tribes such as the Shawnee, Delaware, and Mingo wanted to prevent white expansion west of the Ohio River, and with the material support of the British, they waged war on frontier settlements and blockhouses. In September 1782, over 200 Indians and a small contigent of British besieged Fort Henry on the Ohio River (in present day Wheeling, WV) for three days. Despite their attempt to burn the fort and force the garrison to surrender, they were unable to oust the colonial garrison. Frustrated, they abandoned the siege of Fort Henry and determined to move farther inland. Learning of the Indians' plans, runners were sent into the countryside to warn of further attacks.

Among the communities warned were the settlers along Dutch Fork Creek, over a dozen miles from Fort Henry just inside the Pennsylvania border. As the name implies, many of the local families were German immigrants. The first to learn of possible attack was Jacob Miller, who rushed to Rice's Fort, the local blockhouse. The fort (situated on Rice family land) consisted of three small blockhouses connected to each other. Fortunately, many of the local residents were absent, having traveled to Hagerstown for trade goods. Ironically, several other residents had left the day before to help defend Fort Henry. Unfortunately, this meant only a few residents could muster to the area's defense on September 14, 1782. Six men and their families ultimately gathered at Rice's Fort: George Leffler (age 30), Jacob Leffler (17), Jacob Miller (20), George Philabaum (27), Daniel Rice (18), and Peter Fullenwider (20).

The settlers had almost no time to prepare. Thirty minutes after Jacob Miller first arrived with warning of attack, some 70-100 Native Americans emerged from the brush in the fort's vicinity. They quickly killed local resident Conrad Philabaum and Henry Fullenwider, Jr.'s child. Conrad's wife Sarah Philabaum recorded in her estate papers:

"We being greatly on the frontier line O this horrid scene happened as we were all forted at Mr. Rice's and between our cabin and his blockhouse. This happened, my husband and son as they fell in the enemy's hand, my husband scalped, lying in his blood...to me a great surprise and affecting sign, the loss of a good husband and an obedient son."[3]

The Indians then realized that Rice's Fort was garrisoned and rushed forward in attack. The six men opened fire and drove the Indians back. During this initial exchange of gunfire, a bullet flew through the blockhouse porthole and killed George Philabaum. The Indians didn't leave, but rather surrounded the fort and attacked sporadically throughout the day. They reputedly called to the garrison, "give up, give up. Indian too many. Indian too big. Give up. Indian no kill." The settlers replied in turn that the Indians were "cowards skulking behind logs to leave their coverts, and shew but their yellow hides, and they would make holes in them."[1]

Jacob Miller coordinated the settlers' defense. Also central to the garrison's defense were the women and children, who helped the men manage their supplies. Local resident Abraham Rice, absent when the attack began, tried to join the garrison but was wounded. Rice went to a Lamb's Fort three miles north and obtained help, and a dozen men arrived to aid the garrison. Rice and two men tried to sneak into Rice's Fort but were spotted and forced to retreat.

Frustrated by the fort's stalwart defense, the Native Americans destroyed surrounding property and livestock as the evening set in. Horses, cattle, sheep, and hogs were slain, and a nearby milk barn only forty yards from the fort was set aflame. The Indians hoped the fort itself would catch alight; rainfall, however, prevented the fire from spreading. Around 2 a.m. on September 15, the Indians finally abandoned the attack. The Natives suffered four dead in the failed assault on Rice's Fort. The only colonial casualty was George Philabaum. Around 10 a.m. that morning, some 60 men gathered to pursue the Indian attackers. The Natives broke up into small parties, however, and eluded capture.

6. Joseph Doddridge. Notes on the Settlement and Indians Wars of the Western Parts of Virginia and Pennsylvania. Albany, NY: Joel Munsell, 1876. Digitized. https://books.google.com/books/about/Notes_on_the_Settlement_and_Indian_Wars.html?id=60cUAAAAYAAJ