The Totem Pole Playhouse has been bringing entertainment to Franklin County summers since 1950. After converting a decommissioned auto shop into their theater, Karl Genus and wife Muriel Benson practiced a perseverance that would set the culture of the playhouse. With big names such as Jean Stapleton and Bill Putch, the Totem Pole Playhouse has gained national prestige through unshakable determination.

The logo for the Totem Pole Playhouse, as seen on the news page of the home website. [9] 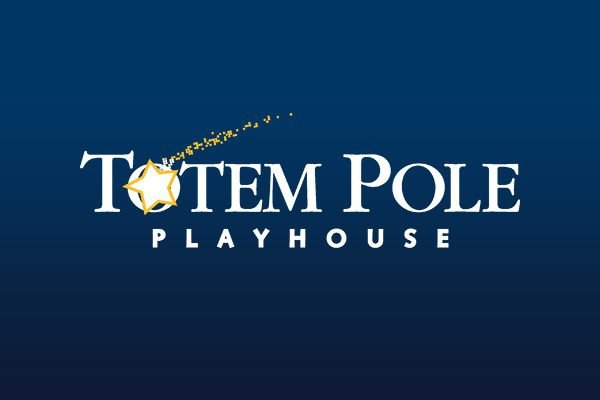 The front of the Totem Pole Playhouse, surrounded by the woods of the beautiful Caledonia State Park. [10] 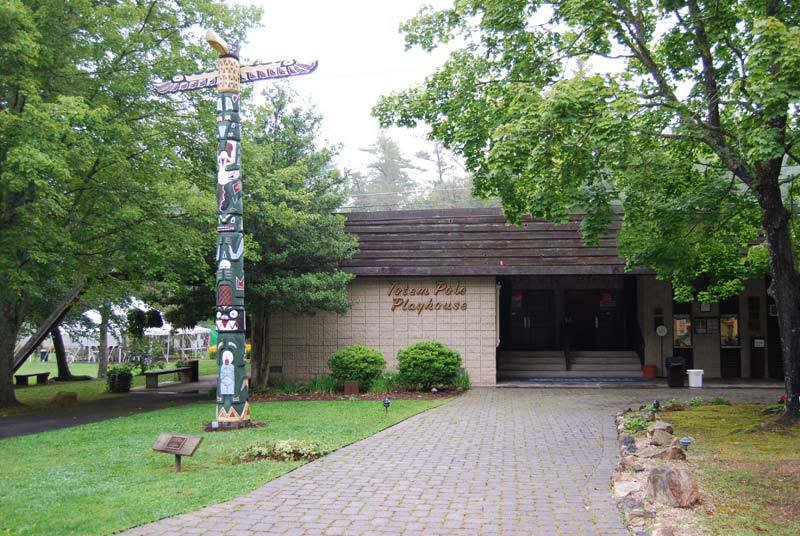 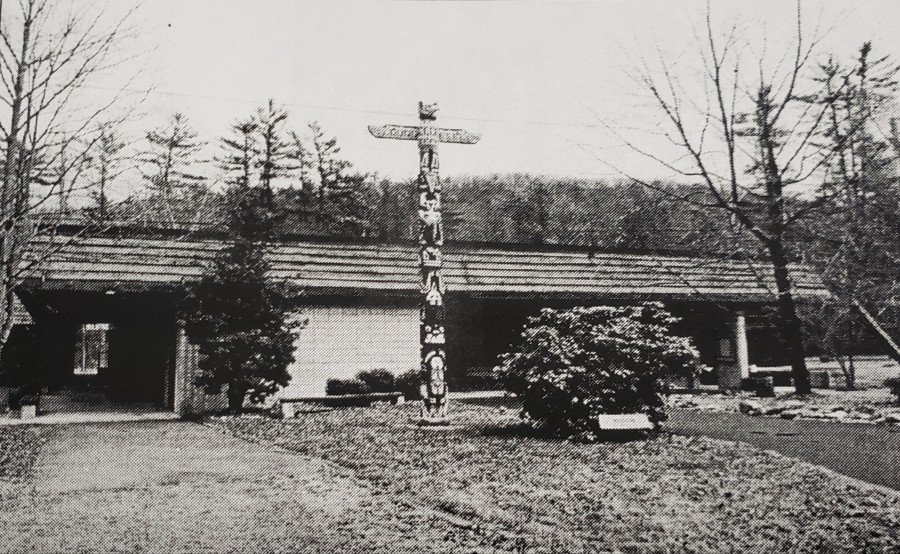 The Totem Pole Playhouse is a summer theater located in Fayetteville, Pennsylvania. Locals affectionately call it the “playhouse in the woods” due to its location on the edge of the Caledonia State Park. Summer theatres run by bringing in actors for the season.  They tend to take on multiple roles through each of the four to six musical productions. Each show runs from two to three weeks.[1]

The Playhouse was founded in 1951 by Karl Genus and Muriel Benson. They converted a small auto shop into their Totem Pole Playhouse. They thrived using their previous exploration in early live television.[5] William H. Putch took over the artistic direction of the Totem Pole Playhouse in 1953. After failing to be hired as the theater director for the Playhouse at its founding, he founded his own theater so as to gain more experience in the field. It wasn’t until two years later that he applied again and was hired. Due to his ambition and his wife, Jean Stapleton’s, acting talent, the Playhouse was able to gain national prominence under his direction. He worked with the playhouse until his sudden death 30 years later. Jean Stapleton continued to appear in over 80 Playhouse productions until her passing.[6] The most seats purchased for one production is still an honor of Jean Stapleton’s “Hello Dolly!” in 1971.[2]

A fire broke out in the original theater in 1969, burning down all of the building save for a concrete wall. On this wall,  Bill Putch painted: “Totem Pole Will Rise Again” And that it did! The playhouse had an awe-inspiring amount of support from the community that brought the theater back to life in a new location down the road. They volunteered many services in order to restore the Playhouse.[3]

The season following the passing of Bill Putch, was directed first by his daughter Pamela, and then by resident actors Carl Schurr and Wil Love.[5] Under the direction of Schurr and Love, the Totem Pole had a series of rewarding events. They released productions that were later moved to the historic Walnut Street Theatre in Philadelphia. There were a number of famous faces visiting the stage, such as Jane Howdyshell and Julie White. The Playhouse began to be supported by the Caledonia Theatre Company (CTC), a non-profit organization that preserves professional theatre through fundraising.[4]

The Playhouse prepared for its last season to be the summer of 2012 as they neared bankruptcy. It had relied heavily on its endowments and was running on the last of the funding. They promoted and reached out to produce full house performances in an attempt to gain the resources to keep running. The community responded with fundraising and donations as the Playhouse is a treasure to the Fayetteville area. The community donated rooms to be rented out to actors and cars to be driven to the theater.

In 2013, Rowan Joseph, the current artistic director was hired. Since taking over, the playhouse has not taken from its endowments. As a banker from New York, he used his skills to put new, effective money saving methods into practice. The Playhouse has since thrived and attendance has increased by the thousands.

Ever since 1953, the Totem Pole Playhouse has been giving back to the community by accepting students and everyday people interested in apprenticeships.[7] They offer professional experience and training as there is no better way to learn than from those that already hold prestige within the field. They also hold theater camps which give students the priceless opportunity to network while playing a key role within the Totem Pole Playhouse.[4]

The Totem Pole has had a number of well-known actors and actresses on their stage. In addition to the well-known Jean Stapleton, John Ritter, Sandy Dennis, Curtis Armstrong, Eric Szmanda, Granville Van Dusen, Betsy Randle, Michael Learned, Meredith Baxter, and Michael Gross, have also appeared on the stage. [8]