Located at the confluence of Conococheague Creek and Falling Spring, Chambers Fort Park occupies the site once home to the stone house, mill, and wooden palisade that made up the fort of Chambersburg founder Colonel Benjamin Chambers. Chambers arrived to the area in 1730, and over the course of the next fifty years built his namesake town around the 25-foot waterfall at Falling Spring that powered the gristmill and sawmill that made his fortune. While the site may have been the center of town for much of its early history, it also stood at the epicenter of a struggle for control of the Pennsylvania borderlands during the Seven Years’ War that revolved around the fort’s very existence (in particular the presence there of two cannons). The area where the Falling Spring and Conococheague Creek attracted a number of entrepreneurs after Chambers’ death in the 1780s, who used the water to power a series of mills that drew Chambersburg into the industrial networks that emerged over the course of the nineteenth century. The borough of Chambersburg announced its intention to purchase a portion of the site in its master plan for the downtown area in 1995, a location it went on to open as Chambers Fort Park in 2008. The park hosts concerts and movies throughout the summer months, and features a replica water wheel, reconstructed log cabin, the Founding Family statue, and several veterans’ memorials that are open to the public year-round. 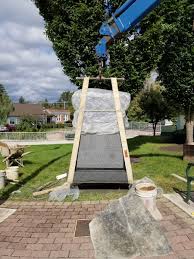 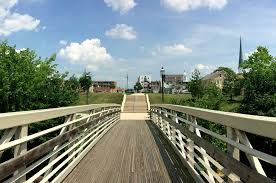 The generative power of the 25-foot waterfall that gave Falling Spring its name attracted Benjamin Chambers to the site shortly after his arrival to colonial Pennsylvania in the early eighteenth century. Although Chambers settled on the site in 1730, however, he evidently did not see the need at first to build any sort of fortifications around the mills he constructed there shortly after his arrival. Indeed, it would not be until the outbreak of hostilities between Pennsylvania and the Delaware Indians during the Seven Years’ War over two decades later that Chambers constructed the defenses that gave the area its name. Doing so immediately elevated the status of Chambers’ settlement in colonial politics, a rise that eventually brought him into conflict with authorities in Pennsylvania’s capital of Philadelphia. In part as a result of this series of events, the growth of Chambersburg remained minimal for much of its early history. It was only after the town became the seat of the newly-created Franklin County in 1784 that Chambers’ dream for his settlement began to become a reality. After his death in 1788, the site of Chambers’ fort remained integral to the town’s growth. The same water power that brought Chambers to the area in 1730 and facilitated the operation of his mills did likewise for a series of entrepreneurs throughout the nineteenth century, local industrialists that connected Chambersburg to the regional, national, and global markets that emerged in that period. As those markets began to change over the course of the twentieth century, however, the site’s centrality to local industry became less certain and, eventually, the borough of Chambersburg chose to purchase an unused portion of it for the construction of Chambers Fort Park. The park opened to the public in 2008 and features a reconstructed log cabin and water wheel as well as memorials to local veterans and the Founding Family, which are accessible year-round. The borough also hosts movies and concerts at the park during the summer.

When Benjamin Chambers first arrived to the area of Falling Spring in 1730 he lived in a log cabin with shingles held to the roof with iron nails, fasteners that were evidently of such value in the area at the time that one of his neighbors set fire to the residence while he was away in order to steal them. Chambers replaced his destroyed home with a similar structure shortly thereafter, which remained unfortified until he attended a meeting in nearby Shippensburg with other settlers from the area in 1755. This meeting resulted in the group’s decision to construct a series of private forts throughout what was then Cumberland County to protect the region from attacks by Delaware Indians and other Native groups during the Seven Years’ War. In addition to choosing Chambers’ home as the site of one of these forts, the group also recommended the construction of fortifications at Carlisle, Shippensburg, and a number of other locations. Chambers completed work on his fort the following year. He replaced his former log dwelling with a two-story stone structure, a portion of which hung over Falling Spring to prevent attackers from cutting off the compound’s water supply. This house had a lead roof to protect against flaming arrows and narrow windows for use as loopholes by marksmen inside, all of which Chambers had secured with a perimeter of sharpened wooden stakes and a moat that encircled both his house and the adjacent mill. The pride of the fort’s defenses by far, however, was its two four-pounder cannons, weapons that quickly thrust Chambersburg’s founder into the thick of colonial politics on the Pennsylvania borderlands.

Indeed, almost immediately after Chambers completed his fort in 1756 the deputy governor of Pennsylvania, William Denny, demanded that he surrender the cannons to colonial authorities. Chambers’ decision to ignore this demand, and eventually those of other representatives sent to his home by Denny in the following months, placed him firmly at the center of borderlands settlers’ opposition to colonial authorities back east in Philadelphia. Although settlers like Chambers had been taking up residence in the region for several decades at that point, Pennsylvania’s Quaker leadership had for much of the period largely avoided building forts there for fear of starting a war with local Indians. When the opposition party gained control of the colonial assembly during the Seven Years’ War, however, it promised borderlands settlers that it would finance the construction of a string of forts throughout the western portion of the colony to protect the region’s European inhabitants. When the effort proved more complicated than Pennsylvania’s new administrators had initially realized, it stalled, prompting the 1755 meeting at Shippensburg and completion of Chambers’ fort the following year. Because Chambers intended his defenses for the protection of every settler in the surrounding area his neighbors supported him in his struggle against the colonial government, support that ultimately convinced the governor to drop the matter. Acts of resistance by borderlands settlers like Chambers were relatively common during the period and the government’s inability to exert its authority in response contributed to the colony’s shift in favor of independence over the period. More locally, the affair effectively ensured that Chambers’ relationship with that government was worse than most, and though he received permission to lay out the town of Chambersburg only a few years later other support from colonial officials was less forthcoming. As a result, the area remained lightly populated for much of Chambers’ life there despite his best efforts to attract further settlement. It was only after his town became the seat of Franklin County in 1784 that it truly began to grow.

The growth of Chambers’ settlement after 1784 also drew in a number of emerging industries that helped integrate the community into the larger regional, national, and global networks of trade and commerce that drove forward American industrialization during the period. The first mill on the land between Falling Spring and Conococheague Creek other than Chambers’ belonged to his daughter Ruhannah’s husband John Calhoun (the town’s first resident physician), who constructed a paper factory a short distance from his father-in-law’s mill in 1780. Calhoun and his nineteenth-century successor in paper manufacturing at the site G.A. Shyrock acted as suppliers for a number of prominent newspapers throughout the region, transmitting their shipments via long trains of pack-horses that sustained a thriving saddlery industry early on in the town’s existence. Chambers’ original mill, meanwhile, eventually wound up in the possession of his grandson Thomas Chambers, who integrated portions of the mill into a new fulling mill and cotton factory. Subsequent ventures into the wool and brewing industries succeeded him at the site, most notably the Mammoth Mill (named for its size and production capacity) north of King Street. This mill, along with the Washabaugh Brewery next to it (also powered by Falling Spring), fell victim to Confederate raiders in 1864 who set fire to much of the town in retaliation for the Union burning of Staunton, Virginia. A new woolen mill took their place after the war and remained in operation under a succession of owners into the twentieth century. This factory (and its predecessors at the site) supplied manufacturers not only throughout Pennsylvania but across the early United States, tapping into networks of demand that reached from North America into Europe and Asia. In the process, these ventures connected Chambersburg to larger processes of industrialization and global trade that reworked the face of the nation at an increasingly rapid pace over the course of the nineteenth and twentieth centuries.

The confluence of Falling Spring and Conococheague Creek has been central to the history of Chambersburg since its founding in the eighteenth century. As the momentary epicenter of borderlands settlers’ resistance to authorities back east in the colonial era, Benjamin Chambers’ fort stands as a testament to the forces of expansion, conflict, and change that produced the surrounding town, state, and nation. As a node of local industry throughout the nineteenth and early twentieth centuries, it connected Chambersburg to the globalizing forces that emerged over the course of the period. In recognition of its significance to the town’s history, the borough of Chambersburg opened the area south of King Street closest to the confluence of Falling Spring and Conococheague Creek as Chambers Fort Park. In addition to hosting movies and concerts in the summer, the park houses a reconstructed log cabin and water wheel as well as several memorials. The first, the Founding Family statue, depicts Benjamin Chambers welcoming his son James and grandson Benjamin home from the American War for Independence, while the others honor veterans of World War II, the Korean War, and Vietnam. These features, like the occupants of Benjamin Chambers’ original plot on Falling Spring over the years, connect the site to the history of Chambersburg from its inception to the present day.