The Flight 93 National Memorial sits on about 2,200 acres of land while the actual memorial occupies only about 400 acres. The land where the memorial sits is often referred to as “A common field one day. A field of honor forever.” The land became a crash site on September 11, 2001 when the passengers of Flight 93 fought back against three hijackers. It became a memorial two days later when a Pennsylvania State Trooper, who was providing security to what was at the time an active crime scene, brought a flag to his post to inspire the workers at the site and to show support in the time of a national crisis. A temporary memorial, referred to as Memorial Gate, was erected on a forty-foot fence, for the forty victims, where people left cards, flowers, teddy bears, rosaries, flags and cards. The permanent memorial is free to enter and open to the public.

The Wall Of Names, consisting of forty white marble pieces leading along the final approach of Flight 93. Each piece of marble is inscribed with the name of one of the passengers or crew members, ending with a final piece of granite etched with the time that the plane crashed into the field. They collectively point the way to a sandstone boulder which marks the impact site of the plane. 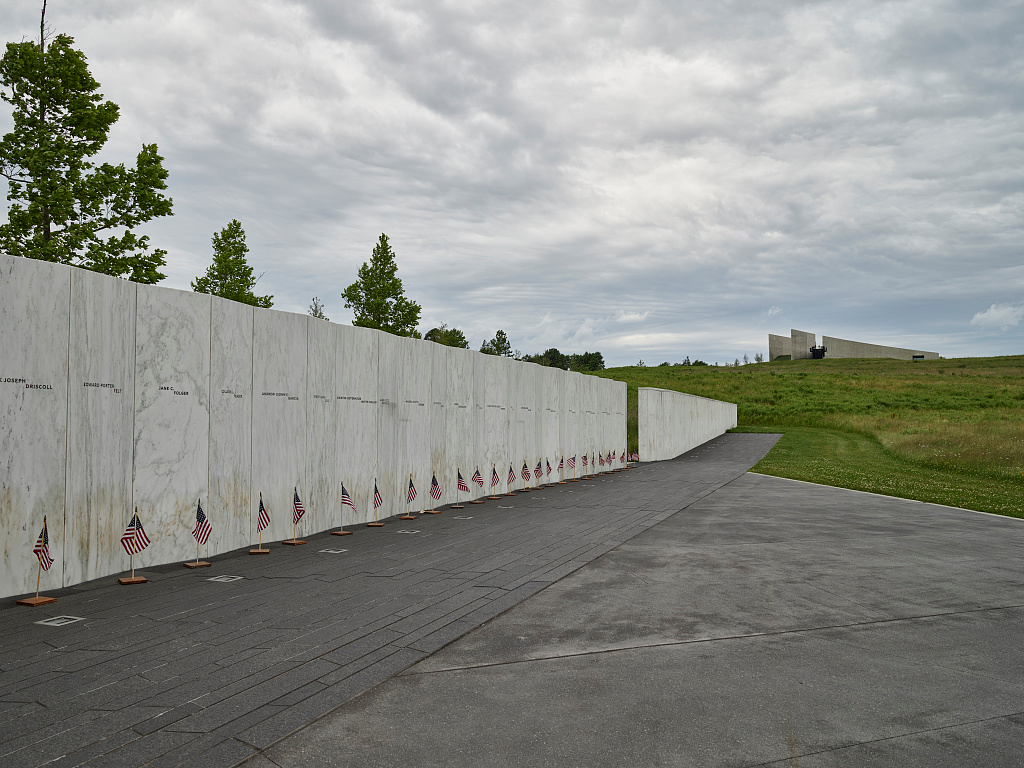 Memorial Gate existed as a temporary memorial in the months following the attack. Mourners attached cards, stuffed animals, religious items, flags, and notes to the forty-foot fence. The fence was removed and every item left was collected and some are now displayed in the Visitors Center at the permanent memorial. 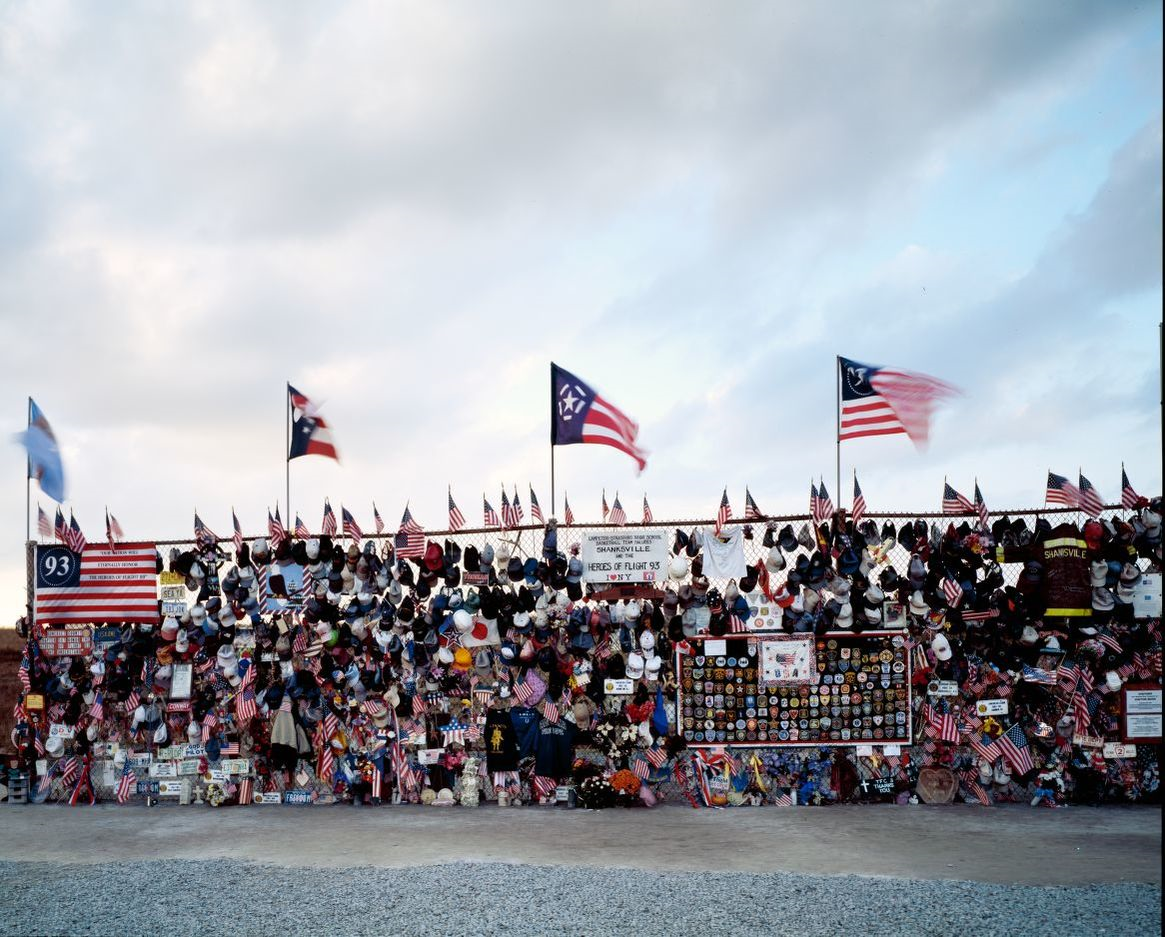 The Tower of Voices was recently completed in 2018. The Tower consists of 40 unique chimes for each of the forty victims. Each chime ranges in five to ten feet and has its own pitch and stands as a visual and audible reminder of the victims. 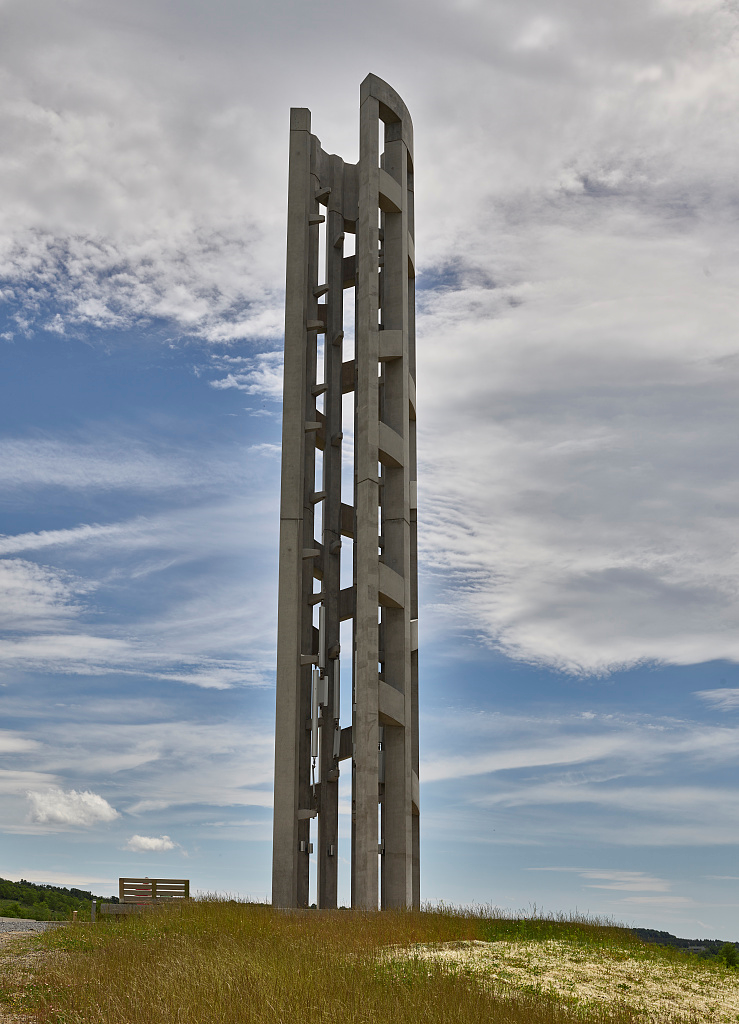 The Flight 93 National Memorial was technically created when President George W. Bush signed the Flight 93 National Memorial Act on September 24, 2002 and added the site to the National Register of Historic Places. It wasn’t until November 8, 2009 that ground was officially broken at a ceremony led by then Secretary of the Interior Ken Salazar and attended by Governor Ed Rendell, Senator Bob Casey, and Representatives John Murtha and Bill Shuster, as well as National Park officials, first responders, and family members of the passengers. It was originally planned to dedicate the memorial on September 11, 2011 but construction was delayed due to a variety of factors.

The “field of honor” is now divided into Memorial Plaza, Tower of Voices, and Wall of Names. The Memorial was designed by Paul Murdoch Architects of Los Angeles, California with Nelson Byrd Woltz of Charlottesville, Virginia who were the winners of an international design competition in 2005. Their design was selected from 1,000 designs from forty-eight states and twenty-seven countries.

The construction on the Tower of Voices didn’t begin until 2017 and is the first thing visitors see upon entering the park. The tower contains forty chimes to represent the “eternal voices” of the passengers and are meant to serve as an audible and visual reminder of their heroism. The tower consists of chimes that vary in size, between five and ten feet, and each chime as its own unique pitch that contribute to a collective tune.

Memorial Plaza, the actual crash site is marked by a 17-ton sandstone boulder that also serves as a grave maker for the victims whose remains were unable to be recovered. First responders describe the place where the plane crashed as an irregularly shaped crater about fifteen feet deep and about thirty feet across filled with unrecognizable pieces of twisted metal, frames of seats, pieces of luggage and other debris. Investigators found debris in nearby farmer’s fields, peoples yards in a pond nearby. Once the investigation was completed the coroner established a fence line to encompass the crash site and ordered that the crater to be filled in. The crater was backfilled and layered with six inches of topsoil and seeded with grass and wildflowers. The site is often referred to as “Sacred Ground”.

Black sloping granite walls run parallel to the line established by the coroner and guide visitors along Memorial Plaza with the crash site on the left and the Visitors Center on the right as the visitor walks towards the Wall of Names. The wall consists of forty white marble slabs standing ten feet high, three inches thick and positioned next to each other follow the flight path of the plane before its crash and point to the boulder. Each slab bears the name of one of the thirty-three passengers or seven flight crew who died in the crash.

The Flight 93 National Memorial will always be the final resting place of the forty victims who died ensuring that the plane would not reach its intended target. It is significant not only as a memorial of a national tragedy, but also as monument to the heroes who died to ensuring the plane would never reach those who would have been its victims.