Fort Ligonier is a reconstructed eighteenth century fort in Ligonier, Pennsylvania. The fort was established as an outpost for British forces planning an attack on Fort Duquesne in modern-day Pittsburgh. On October 12, 1758, the British successfully defended Fort Ligonier from an attack by French and Indian forces. Less than two months later, General John Forbes, along with Colonels George Washington, Henry Bouquet, and Archibald Montgomerie, departed Fort Ligonier and successfully captured Fort Duquesne on November 25. The capture of Fort Duquesne, replaced by Fort Pitt, solidified British occupation of the Forks of the Ohio and led to the establishment of Pittsburgh. Fort Ligonier was reconstructed in the mid-twentieth century and is the setting of historical reenactments, tours, and a state-of-the-art museum that interprets the history of the Pennsylvania frontier and French and Indian War.

The defensive works of Fort Ligonier, a French and Indian War era fort reconstructed in the mid-twentieth century. 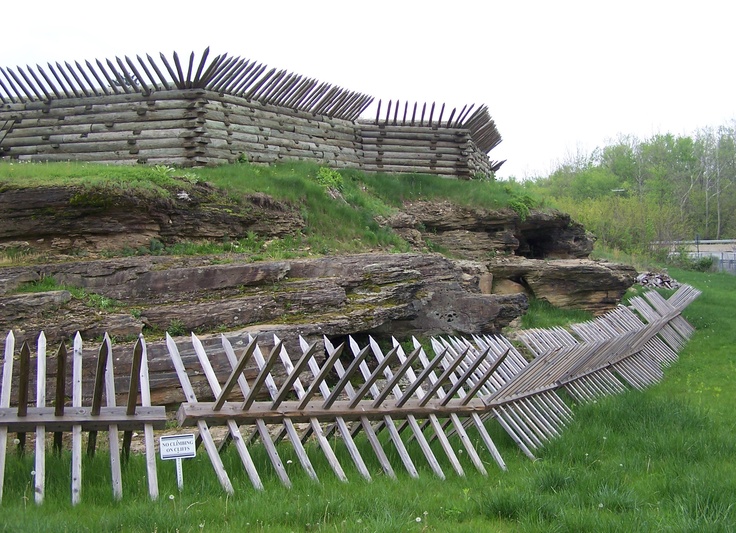 An overhead shot of the fort. 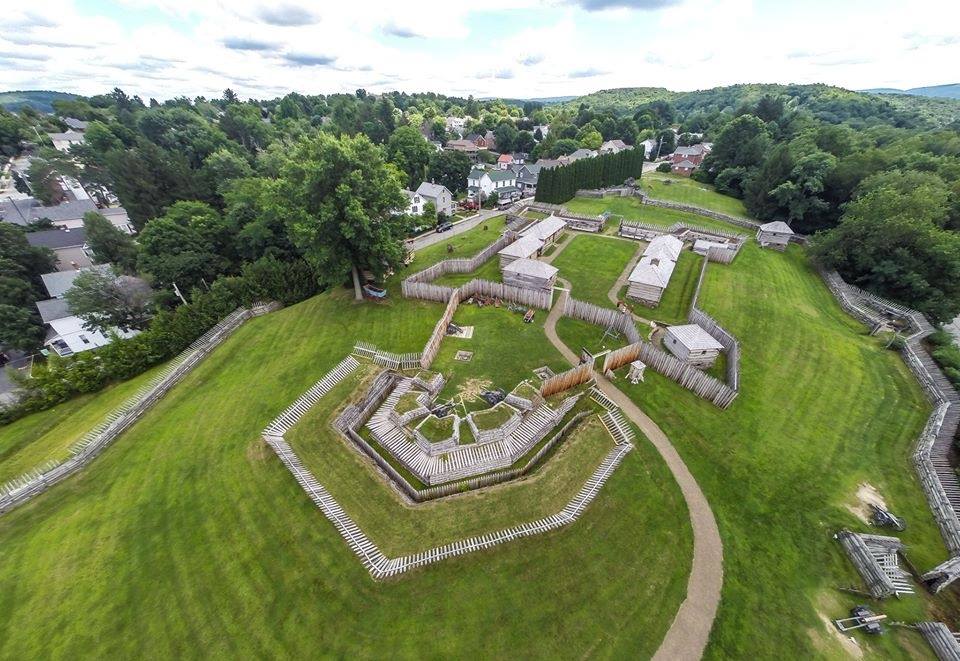 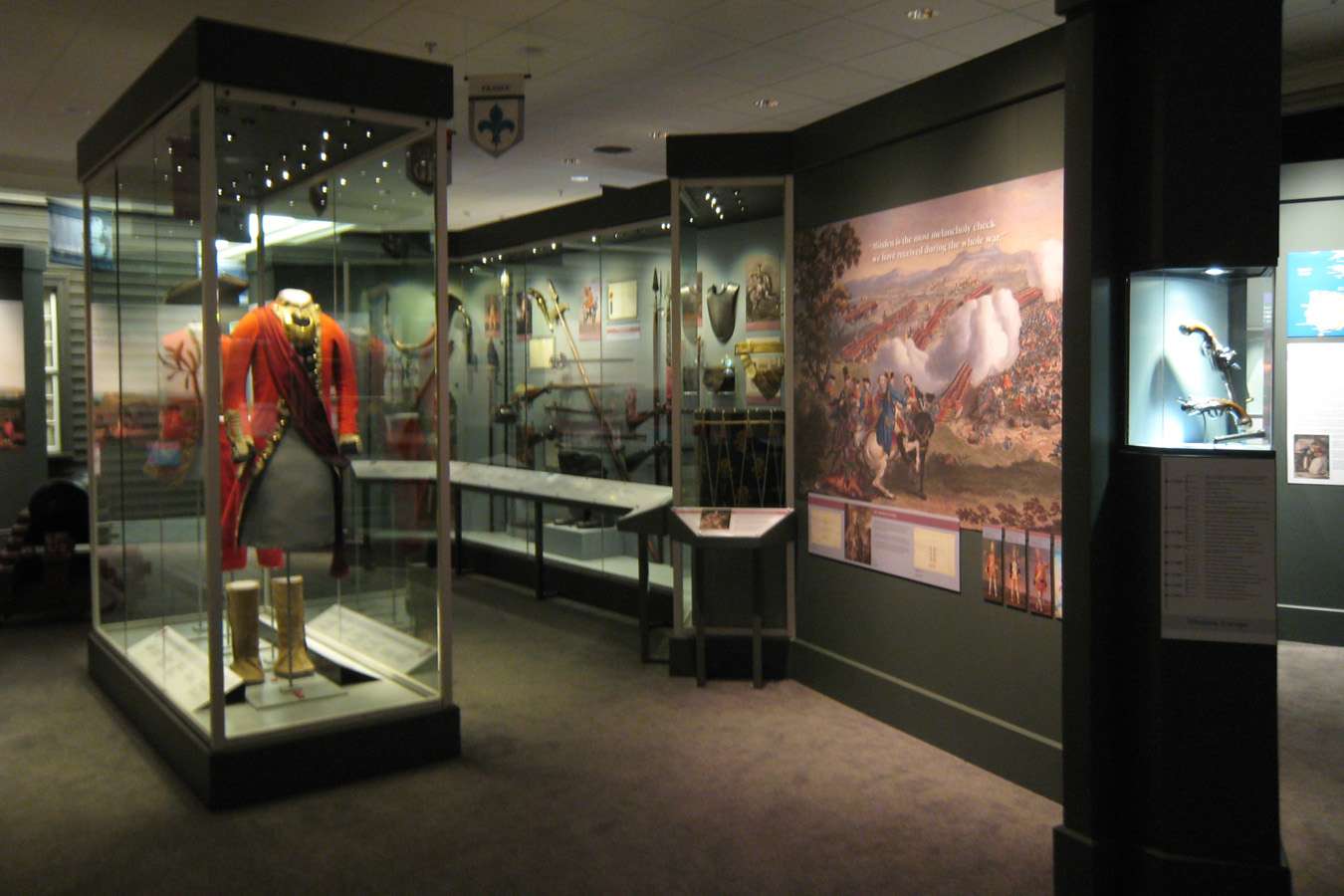 Reenactors depict life at Fort Ligonier and a battle that took place there in 1758. 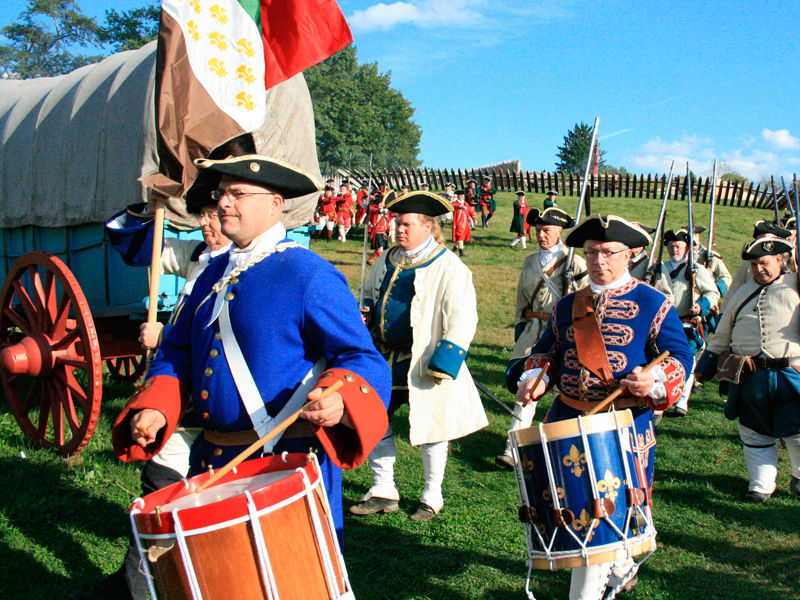 In the eighteenth century, Native American tribes and colonists from Britain and France competed for land that is now western Pennsylvania. Both the British and French claimed this land as rightfully theirs, based on their respective surveys of the land, settlements, trade routes, military outposts, and treaties with Native American tribes who had occupied the land for centuries. Most Native American tribes in the region joined the French effort to drive out the British. In the 1750s, the French began building a chain of forts stretching down the Allegheny and Ohio Rivers, strategic trade and travel routes that the British claimed as part of their colonies. The French, though greatly outnumbered, held Fort Duquesne at the Forks of the Ohio and defeated Colonel George Washington at Fort Necessity and General Edward Braddock's in the Battle of the Monongahela.

In 1758, the British planned a counterattack on the French by simultaneously targeting forts at Quebec, Crown Point, Niagara and Duquesne. General John Forbes, assigned to attack at Fort Duquesne, and his men took a different route than General Braddock to the Forks of the Ohio. Their route, known as the Forbes Road, meandered through the forested Allegheny Mountains towards Fort Bedford. Along the way, Forbes's second in command, Colonel Henry Bouquet, ordered an outpost be built between Fort Duquesne and Fort Bedford. This fort would provide the Forbes Expedition with an advantage that the failed Braddock Expedition did not have: a staging area to prepare British forces for the final attack on Fort Duquesne.

In September 1758, construction on the fort began. Known as the "Post at Loyalhanna," the fort was later named Fort Ligonier in honor of Sir John Ligonier, a French-born nobleman and Field Marshall of the British Army. In mid-September, British forces under Major James Grant left Fort Ligonier to capture Fort Duquesne, but were quickly defeated by the stronger French forces. In response, the French forces planned an attack on Fort Ligonier to seize their supplies and weaken British presence in the Ohio Valley.

On October 12, French and Indian forces attacked Fort Ligonier. At the time, the fort was still under construction. It held around 2,000 British soldiers under the control of Colonel James Burd, whom Colonel Bouquet had left in charge. Though the French and Indian forces pushed British guards and battalions to retreat into the fort, British artillery successfully drove the attackers away. Rather than launch a counterattack, the British continued planning their assault on Fort Duquesne.

Fort Ligonier remained an essential outpost as the British gathered supplies, troops, and intelligence that prepared them to attack Fort Duquesne. In mid-November 1785, Fort Duquesne was vulnerable enough for the British to strike. General Forbes and his men, including Colonels Washington, Bouquet and Archibald Montgomerie of Scotland, departed Fort Ligonier. They successfully captured Fort Duquesne, which the French burned as the fled. The reconstructed fort on this location was named Fort Pitt, after William Pitt, the British Secretary of State. This later became the city of Pittsburgh.

Fort Ligonier was never taken over by another army, and it served as a refuge for settlers in the Indian Wars. It also was the only strong hold that never fell in the Pontiac Revolt of 1763. After serving seven strong years, Fort Ligonier was abandoned in 1765 by Bouquet's recommendations.

Though Fort Ligonier disappeared more than 175 years ago, its location was able to be identified from early military records and maps that outlined the fort. Fort Ligonier's design was based on the principles of continental Europe structure. The structure was mainly made out of earth and timber; which the army had a large surplus. The inner part of the fort was a square shape with pointed projections on all four corners. In the center of the square were storehouses, officer's barracks, power magazine, and other structures.

Beginning in 1947, the fort was partially reconstructed. The most recent renovation was the lower inner half inside the walls which includes the officer's barracks and two bastions which are connected by a wall of palisades.  Within the reconstructed fort are the officers' mess, barracks, guardroom, underground magazine, commissary, and officers' quarters.  Reconstructed buildings outside the fort's walls include the Pennsylvania hospital, a smokehouse, saw mill, forge and bake ovens.

The museum's exhibits include the History Gallery, French and Indian War Art Gallery, The World Ablaze: An Introduction to the Seven Years' War exhibit, and the George Washington Exhibit.  The eight-acre site recently added its new Fort Ligonier Center for History Education which will be used for educational programming, workshops, lectures and exhibitions. Finally, the fort is the main attraction of Fort Ligonier Days, a three-day arts and heritage festival held every October around the time of the Battle of Fort Ligonier.

James, Alfred Proctor and Charles Morse Stotz. Drums in the Forest: Decision at the Forks, Defense in the Wilderness. Historical Society of Western Pennsylvania, 2005.