Camp Allegheny was home to a Civil War skirmish on December 13, 1861 that saw men led by Confederate Colonel Edward "Allegheny" Johnson turn back Union forces under Brigadier General Robert Milroy. Camp Allegheny is located in the Monongahela National Forest of the Allegheny Mountains in the eastern part of West Virginia. John Yager’s family owned the property where Camp Allegheny was located and in the first year of the Civil War, the area was controlled by pro-Confederate forces. The Yager’s provided goods that they sold or gave to the soldiers. After the skirmish that occurred here, the upstairs of the Yager house was also used as a hospital. 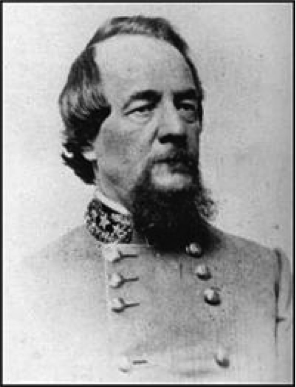 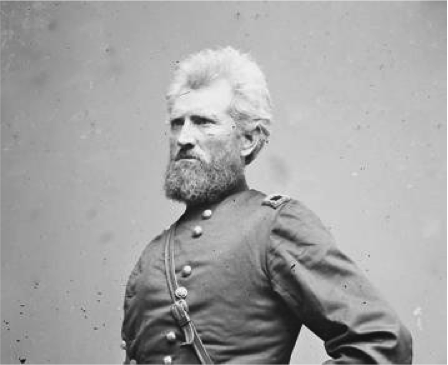 A gravestone at the cemetery of Camp Allegheny 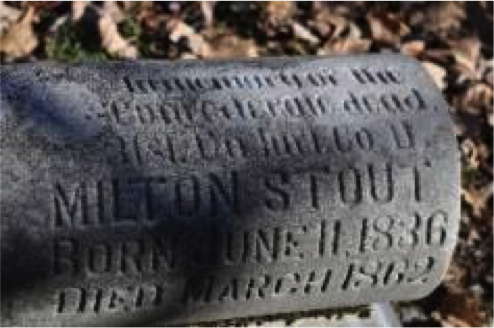 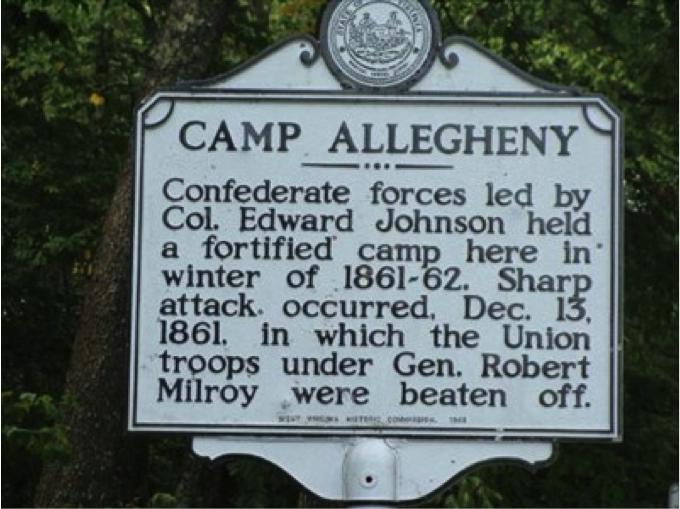 In November 1861 Confederate forces under Colonel Edward Johnson of the 12th Georgia Infantry was given orders to garrison the mountain pass overlooking Staunton-Parkersburg Turnpike. Colonel Edward “Allegheny” Johnson remained in the camp through April 1862 where he and his men endured a harsh and brutal winter. Throughout the winter of 1861-April 1862 more Confederate soldiers died from exposure and disease than in the small battle that would occur here on December 13, 1861.

The Staunton-Parkersburg Turnpike was an important route, especially for the Confederate army as it allowed them to move men and materiel from Staunton in the Shenandoah Valley to Parkersburg and the Ohio River. This turnpike running through the Appalachian Mountains was important to both the Confederation and Union and control of supply routes like this played a major role in many Civil War battles.

On the morning of December 13, 1861, Union soldiers led by General Milroy moved to attack Confederate soldiers at Camp Allegheny with a two-pronged attack. The two Union detachments were not in contact with one another and one came much after the initial attack which made it possible for the Confederate defenders to maneuver men to meet each flank.  The attack was poorly coordinated as the mountainous region was difficult to maneuver and proved impossible for a coordinated attack.

Both sides fought with vigor, but ultimately General Milroy retreated to Cheat Mountain owing to Confederate artillery and holding superior ground. Colonel Johnson was given the nickname “Allegheny Johnson” for his victory as his 1200 men had turned back approximately 1,900 Union soldiers. The Union lost about twenty men and an additional one hundred and seven were wounded with ten missing. On the Confederate side, there was an estimated twenty killed, ninety-eight wounded, and twenty-eight missing.

Camp Allegheny is also part of the Civil War Discovery Trail program which connects Civil War sites in over thirty states. Camp Allegheny is listed on the National Register of Historic Places and includes multiple earthworks that were constructed by soldiers as well as a campground and a church site with a cemetery where many of the soldiers who died were laid to rest.