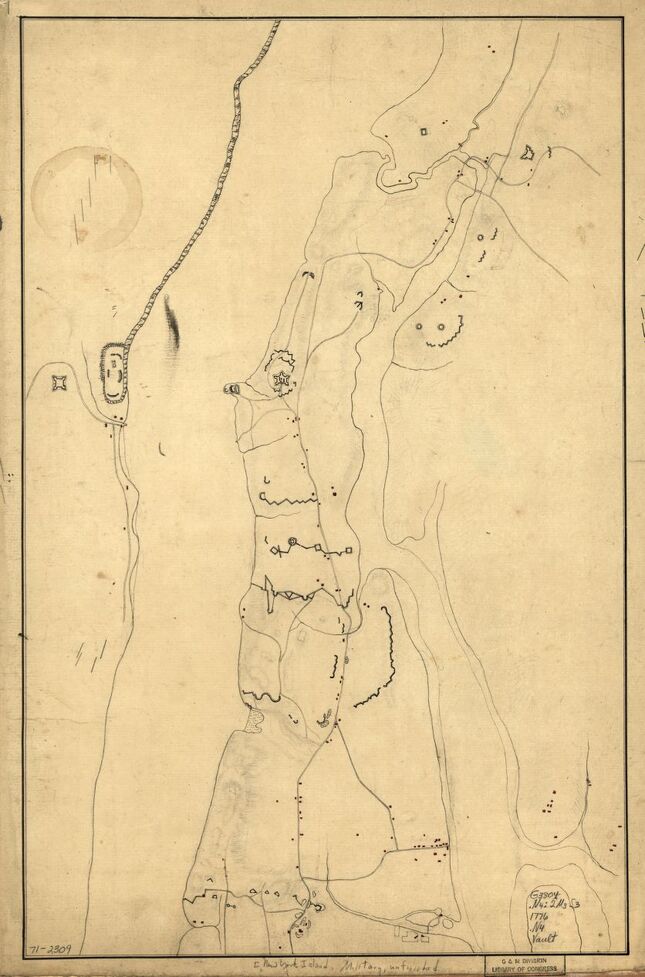 The First Line of Defence Marker 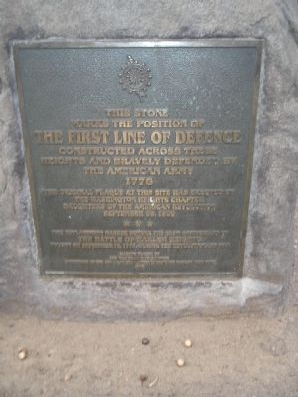 "The Americans formed a defensive line across Broadway at this point. The photo looks south, in the direction from which the British troops approached" 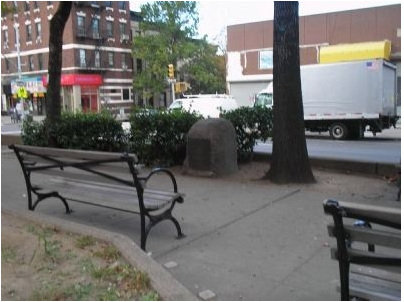 The Continental Army, led by Commander in Chief George Washington, was positioned along the Harlem Ridge in three lines of defense. The first line of defense was included three small redoubts, enclosed fortifications constructed to defend against an attack from any direction. The colonists "first line of defense" was roughly located at the modern day 147th Street.

Although hastily constructed, this line of defense was the most elaborate of all the defensive lines built near this site built by reserves under General Spencer. This defensive line was constructed leading up to the Battle of Harlem Heights which occurred on September 15, 1776. The works extended from St. Nicholas Avenue (then the King’s Highway) to the summit of “Break Neck Hill”, then crossed west to the old Pinehurst mansion, zigzagging irregularly afterward to the point at Broadway and 147th, finally terminating in the Hudson River. The defensive line saw action on October 27, 1776 when the Americans successfully resisted a British advance. Colonel Robert Magaw led the battle from Fort Washington.

During the final assault on Fort Washington on November 16, 1776 a much stronger attack was made on the first line of defense by the combined forces of some 4,000 British and Hessian troops led by Lieutenant General Earl Percy. The position was defended by a mere 600 Pennsylvanians and Connecticut Rangers. They made their stand until they could no longer maintain the position, retreating to Fort Washington and later surrendering to some 14,000 opponents. Most of these men were taken to prison houses and ships following their surrender and many would die in their captivity.

This structure was an important part of the defense of New York during the Revolutionary War. The Battle of Harlem Heights is often referenced by historians as a psychologically important, if small, victory for the Continental Army. After demoralizing defeats in New York, this short battle revealed to the troops that they had another option than simply, retreat.

For more information about the Battle of Harlem Heights, reference this Clio post.

For more information about the Battle of Fort Washington, reference this Clio Post