Trinity Cemetery and Chapel of the Intercession

Trinity Cemetery is a park-like burial ground bordered by W. 153rd Street, Riverside Drive, W. 155th Street, and Amsterdam Avenue. The famed naturalist and artist, John James Audubon is buried in Trinity Cemetery; the cemetery is on land that was formerly part of Audubon's farm. Trinity Church bought the 23 acres in 1842 from Richard Carman. Broadway Avenue was extended northward through the cemetery in the 1870s and a suspension footbridge was constructed to join the east and west parts of the cemetery. The footbridge was removed in 1911 to build the Chapel of the Intercession in the northwest corner of the east part. The Chapel was designed by Bertram Grosvenor Goodhue in Late Gothic Revival style; the renowned architect died in 1924 and is entombed in the chapel transept's north wall. Trinity Cemetery and the Chapel of the Intercession Complex were listed in the New York and National Registers of Historic Places in 1980. 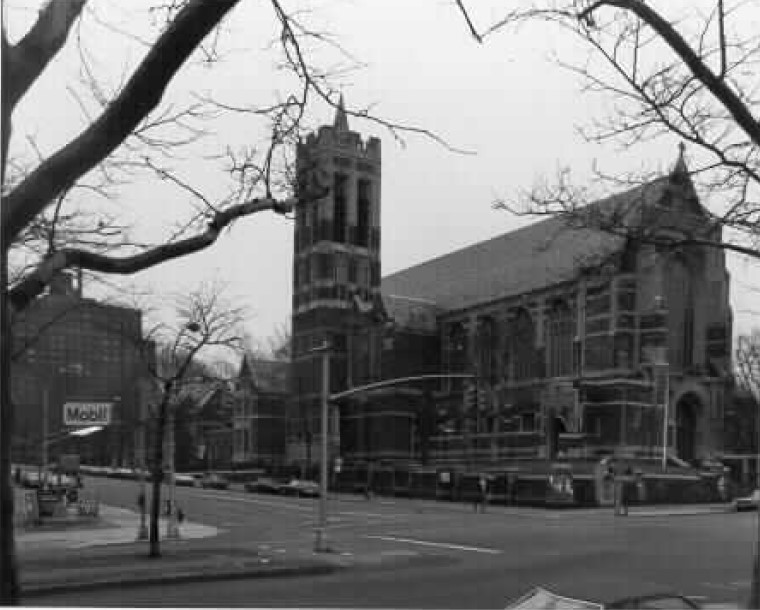 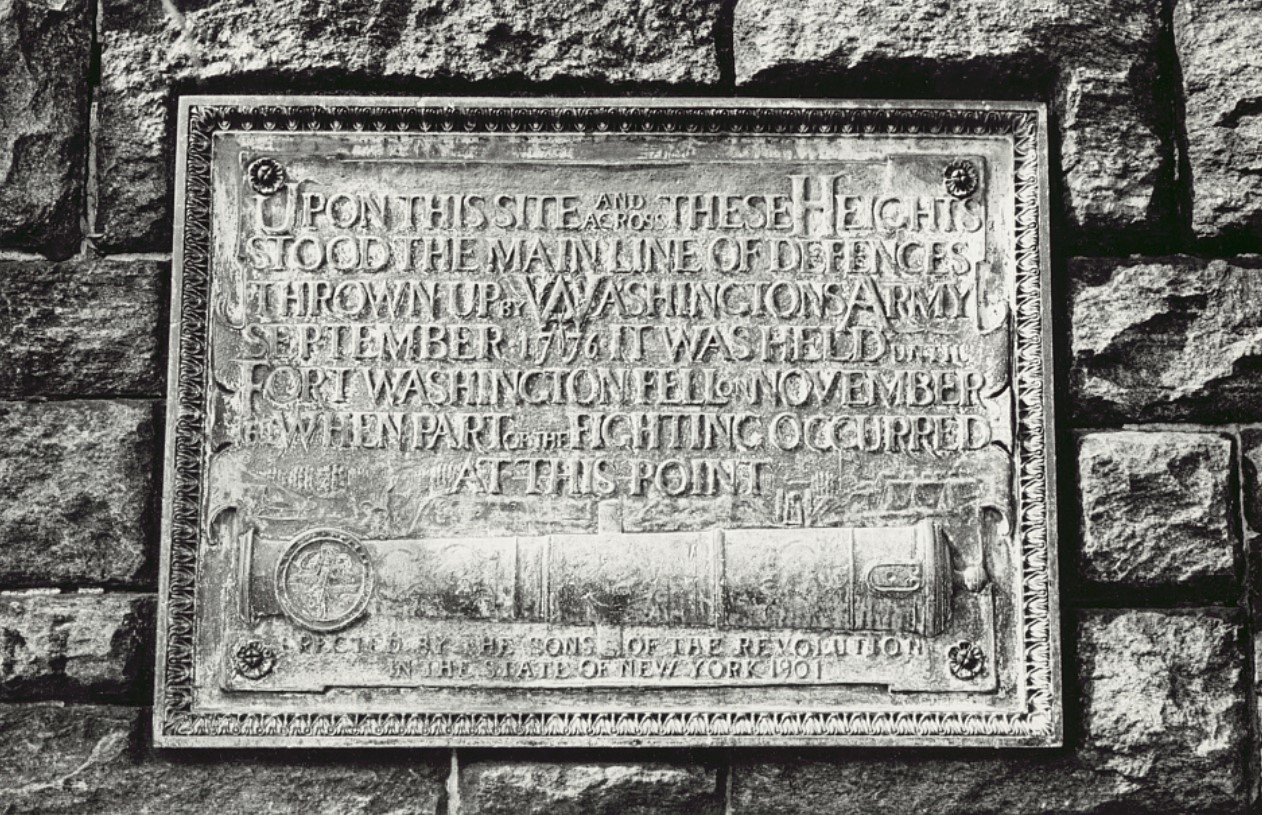 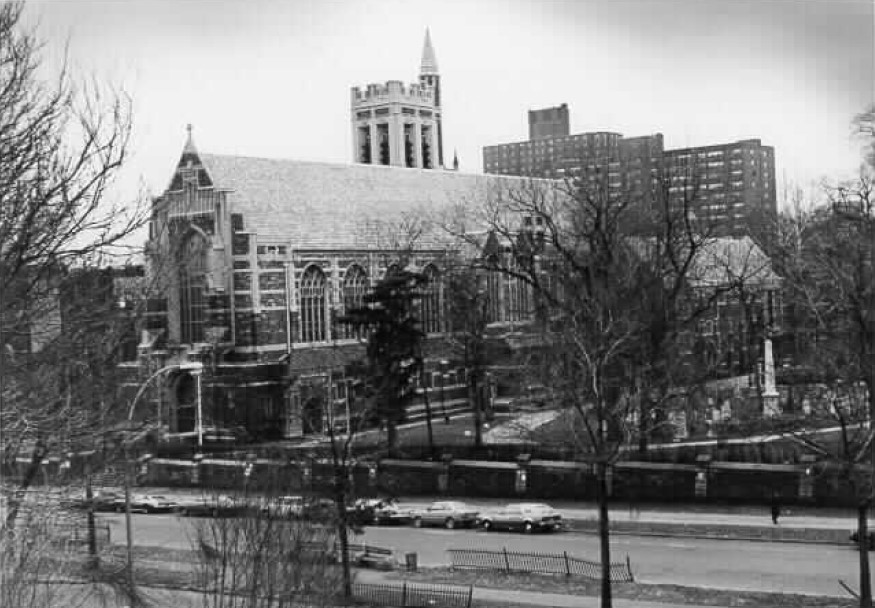 Interior of Chapel of the Intercession, facing east toward altar in 1980 photo (Senigo) 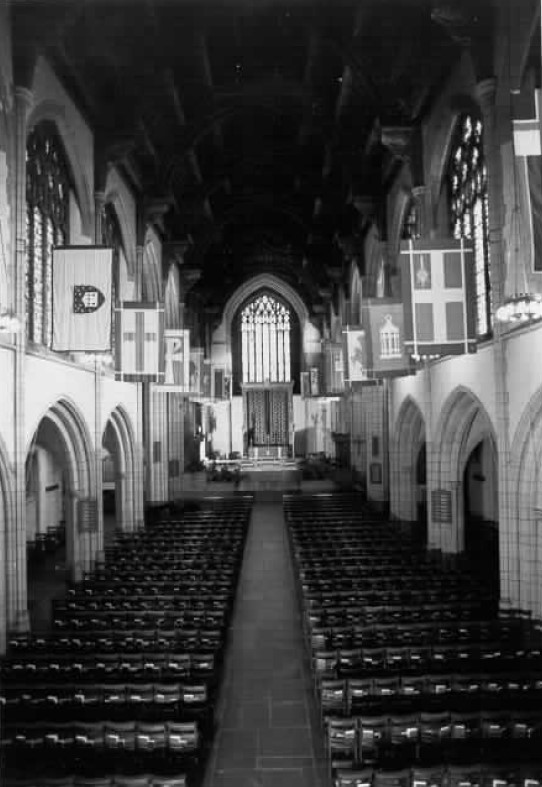 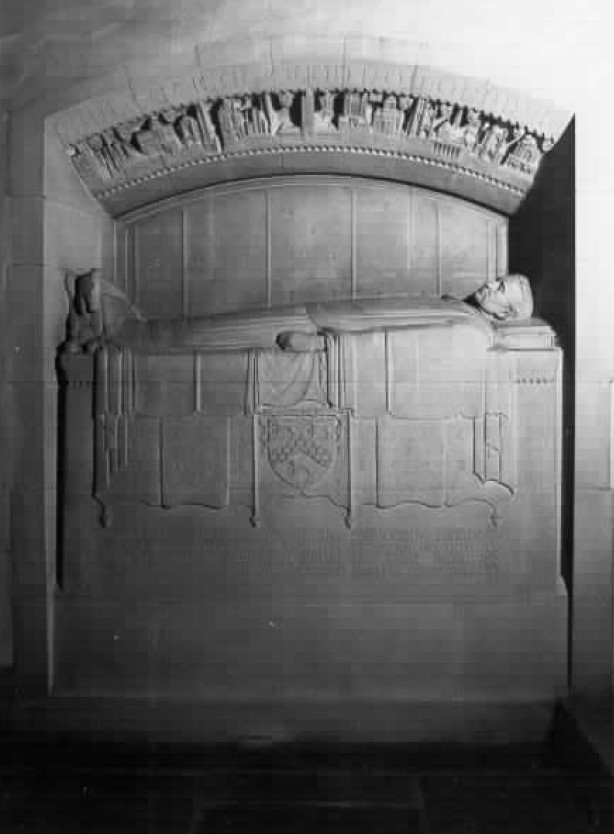 Trinity Church in Lower Manhattan at Broadway and Wall Street has a burial ground but the cemetery was nearly full by the early nineteenth century, after about 150 years of interments. The church bought land in Uptown Manhattan to create a new cemetery; the church also considered buying land in the Bronx or Brooklyn. When the city's street grid was designed on paper in 1811, the grid's northern edge stopped at W. 155th Street. It was thought that it would take many years for settlement to spread north of this grid. The 23 acres purchased by Trinity cemetery to establish a new burial ground in Washington Heights bordered W. 155th Street on the north, so was essentially on the edge of town.

Architect James Renwick Jr. was hired to design the new cemetery's landscape with pathways winding through the hilly terrain. Renwick was the designer of the famous "castle" building in Washington, D.C., the original Smithsonian Museum building. Calvert Vaux designed the stone walls surrounding the cemetery's east and west sections in 1876, after the extension of Broadway bisected the cemetery, A plaque was inserted into the wall in 1901 to commemorate the Revolutionary War activities connected with this high ground, as General George Washington's main line of defense in 1776 was established here. When Fort Washington was captured by the British in November 1776, some of the fighting took place within what is now the cemetery. Vaux also revamped the serpentine pathways and designed a Gate House/ Keeper's Lodge which stands at the corner of W. 153rd Street and Amsterdam Avenue in the east section, near heavy iron gates.

The Chapel of the Intercession's footprint is shaped like a Latin cross, with the main entrance at the west end (on Broadway), atop a flight of steps. The altar is near the east end of the building, as is a square bell tower. The tower contains a bell gifted to the parish in 1704 by the Bishop of London. The marble altar is set with hundreds of stones collected from places with religious significance and held in place by inlaid bronze. Tiffany and Company created the church's crucifix, candlesticks, and ritual vessels. Bertram G. Goodhue's tomb is topped by an effigy of the architect of the Chapel, sculpted by Lew Lawrie. Goodhue also designed St. Thomas' Church in New York City, the Cadet Chapel at West Point in New York State, Yale Library in Connecticut, and the Nebraska State Capitol in Lincoln; the tomb includes reliefs of these other works. The Chapel was consecrated in 1915.

To the southeast of the Chapel are two related buildings, a three-story Parish House and a two-story Vicarage. The Parish House contains a large social hall, a kitchen, and office space for the parish. The Vicarage is a Tudor style residence. All three buildings are part of the National Register listing and are built of random ashlar with trim and details in limestone.

Trinity Cemetery continues to be an active burial ground owned by the Parish of Trinity Church, offering mausoleum spaces. As of October 2021, the cemetery requires that visitors wear face masks. Entrance is through the pedestrian gate at 770 Riverside Drive; hours are 9a-4p Mondays to Sundays. Funeral procession vehicles enter through the main gate at 601 W. 153rd Street; the gate is currently closed to other vehicles.

Sons of the Revolution in the State of New York. Plaque commemorating the main line of defense of Washington's Army during the Revolutionary War, Library of Congress Prints and Photographs Division, catalogue. January 1st 1901. Accessed November 2nd 2021. https://www.loc.gov/item/2020635789/.