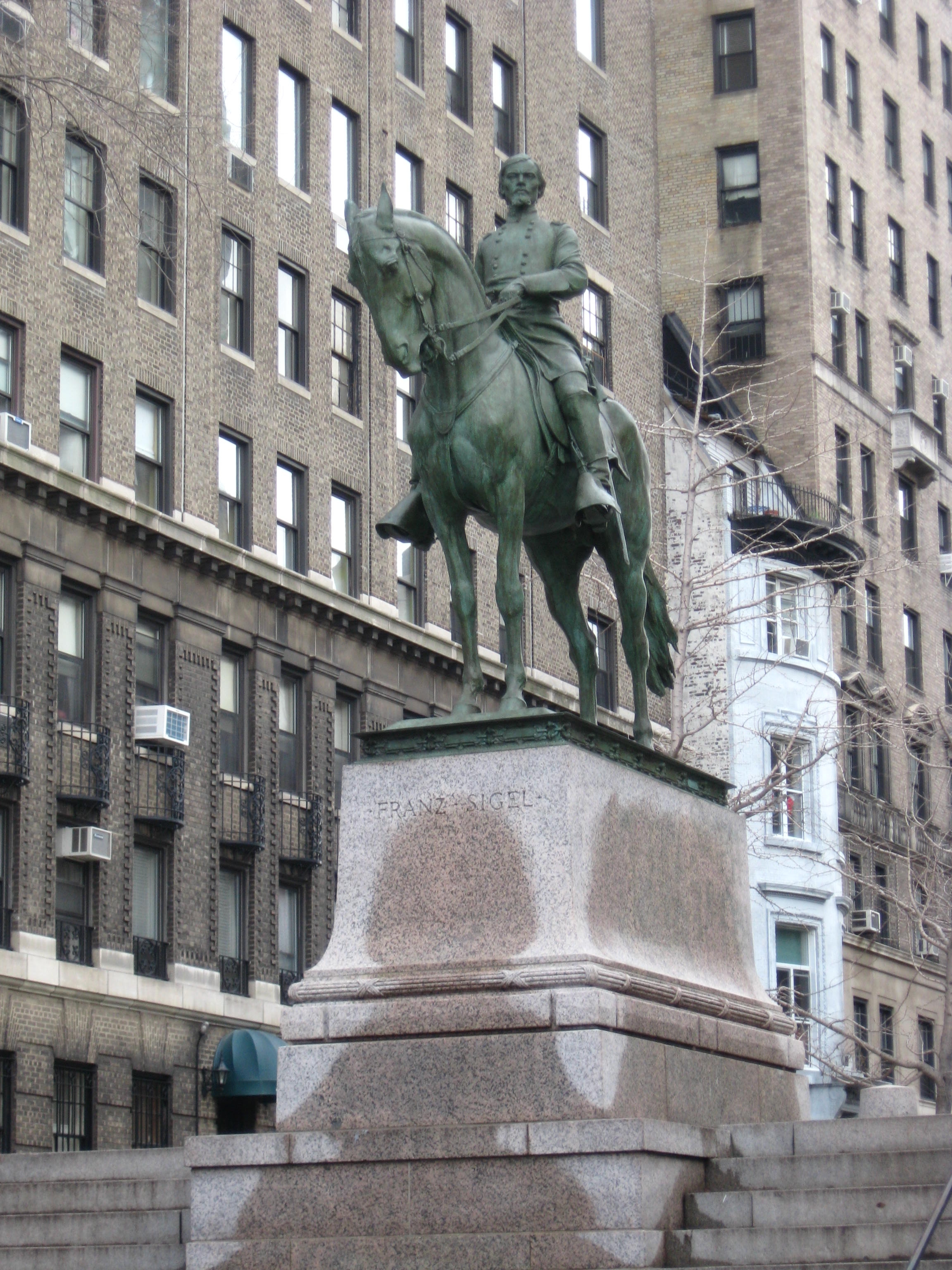 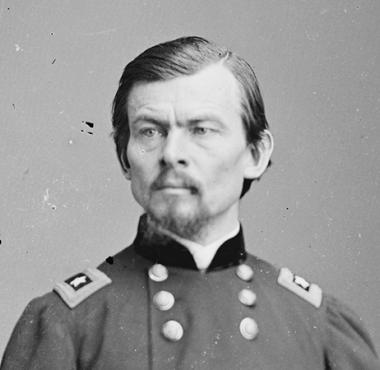 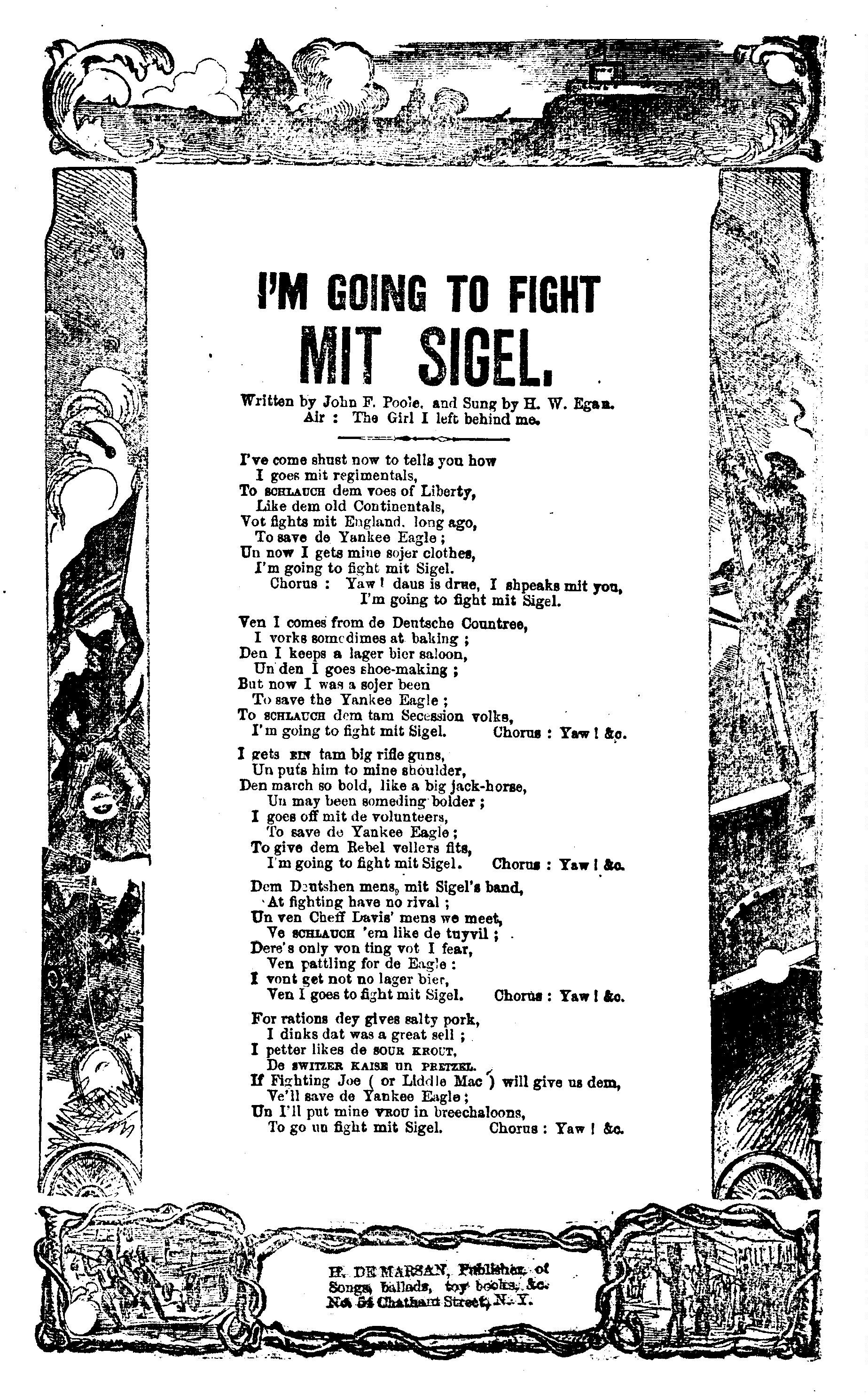 Franz Sigel was born into a well-respected family in Sinsheim, Baden (now Germany) on November 18, 1824. His father, Moritz Sigel, was a lawyer and judge. As a boy, he received a high-quality education at the gymnasium at Bruchsal. Sigel then enrolled in the military academy at Karlsruhe, graduating in 1843. After graduation, he became a lieutenant in the Baden army. In 1847, he resigned after killing a fellow officer in a duel. Sigel then studied law at the University of Heidelberg, but dropped out in 1848 when revolutions swept across Europe. Holding liberal politic views, he supported the revolution in his native country and led troops in combat against the Baden monarchy. In July 1849, after suffering a series of military defeats, Sigel fled Baden, making stops in Switzerland and Great Britain before immigrating to the United States and settling in New York City in 1852. While living there, Sigel worked as a school teacher, enrolled in the Fifth New York Militia, and wrote for the New Yorker and the New York Times. He also met and married Elsie Dulon in 1854. The couple would have five children.

In 1857, Sigel moved to St. Louis, Missouri. There, he taught at the German-American Institute. He also co-founded a magazine and joined the fledgling Republican Party. Shortly after the Civil War broke out in the spring of 1861, Sigel encouraged German-American enlistments and became colonel of the Third Missouri Infantry Regiment. Under the command of Nathaniel Lyon, he led his men in small engagements against pro-Confederate forces near St. Louis and Carthage, Missouri, helping to secure the federal arsenal in St. Louis and keep the state in the Union. When Lyon was killed in action at the Battle of Wilson’s Creek, Sigel received a promotion to brigadier general in August 1861. Sigel’s promotion, however, was partly a political move. Army top brass hoped that it would help spur German-American enlistments.

In March 1862, he secured his greatest victory at the Battle of Pea Ridge in northwestern Arkansas. For his service in battle, Sigel received a promotion to major general and was transferred to the Eastern Theatre. His success at Pea Ridge and his promotion to major general proved to be the high-water mark of not only his experience in the Civil War, but also his military career. In August, he commanded troops at the Second Battle of Manassas, a federal defeat. Later that same year, Sigel was present at Fredericksburg and Antietam, but remained in reserve and saw no action. In early February 1864, he was given command of the Department of West Virginia, but was relieved of his duties in May after being defeated at the Battle of New Market. On May 4, 1865, Sigel resigned his commission.

Immediately following his service in the Civil War, Sigel moved to Baltimore, where he published a German-language newspaper. In 1867, he returned to New York City. There, he worked as a draftsman for two transportation companies before serving in various local government positions between 1870 and 1889. In the 1890s, he published the New Yorker Deutches Volksblatt and then served as editor of the New York Monthly. On August 21, 1902, he died of natural causes at the age of seventy-seven. His remains were buried in the city’s Woodlawn Cemetery.

Only two years after Sigel’s death, the Sigel Monument Association commissioned sculptor Karl Bitter to design a memorial to honor the German-American’s life and military career. Located at the top of a staircase that connects Riverside Drive and West 106th Street and dedicated in October 1907, the monument consists of a bronze over-life-sized equestrian statue on a granite pedestal. Sigel sits proudly upright on his horse with his left hand firmly grasping the reigns while his right arm hangs down by his side and his right hand clutches his wide-brimmed hat. The Sigel equestrian statue was one of many monuments to foreign-born military heroes that Bitter completed throughout his career. In 2004, the Citywide Monuments Conservation Program conducted a full restoration of the monument. Shortly thereafter, an endowment with the Riverside Park Fund was established in memory of Thelma and Alex Schwarz to provide for the future upkeep of the monument.