A depiction of the battle. When the battle was done 52 lay dead and 41 were taken into captivity. 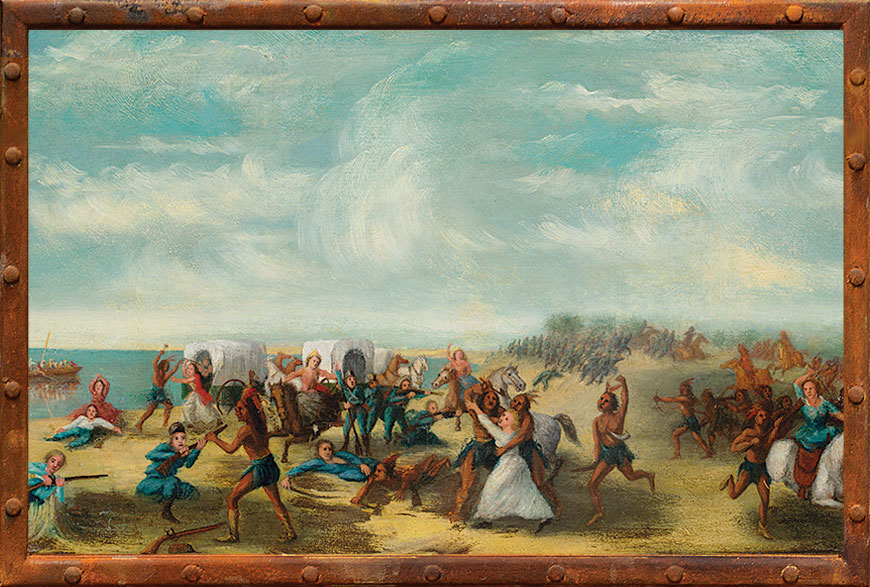 "Defense" - a sculpture created by Henry Hering to commemorate the event. The sculpture depicts an officer from the Fort fighting with some Potawatomie warriors while an allegorical angel surveys the scene from above. 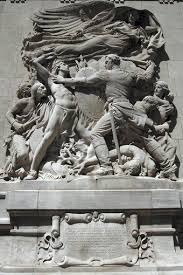 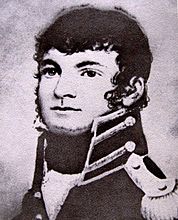 Sculpture from the Fort Dearborn Massacre, Monument by Carl Rohl-Smith (1893). The sculpture portrays the rescue of Margaret Helm by Potawatomi chief Black Partridge. 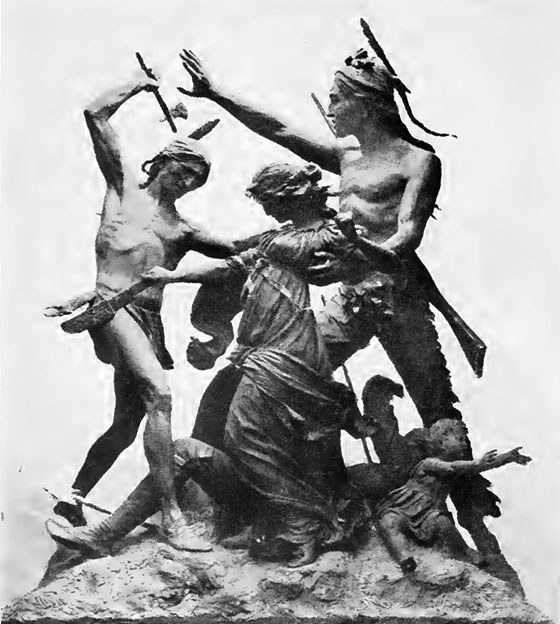 The U.S. built Fort Dearborn -- named for Henry Dearborn, Secretary of War --  in 1803 on the swampy southeast bank of the mouth of the Chicago River where it fed Lake Michigan.1 General Anthony Wayne, member of the U.S House of Representatives at the time, had requested its construction.

From 1803 until 1812, life at the fort and the nearby settlement was fairly quiet. However, Ft. Dearborn's significance grew substantially during the War of 1812 between the British (who still controlled Canada to the north of the Great Lakes) and United States. The British, aided by its Indian allies, took Ft. Detroit and Ft. Michilimackinac (located in today's Michigan) with relative ease.. It appeared the Fort Dearborn would be next, as the British attempted to control the Great Lakes, and the arrival of roughly 1,000 Potawatomis and their allies in early August of 1812 confirmed that belief. The fort's location far from the main populace of the U.S coupled with internal dissension and disorganization made Fort Dearborn an easy target.2

John Kinzie, Chicago's first non-military permanent resident remained in the fort and served as a consultant (friend) to the fort's Captain Nathan Heald. Kinzie was a longtime trapper who befriended many Native Americans, and largely remained a man free of any national allegiance, be it France, England, or the U.S. However, in this case he existed as an American citizen - he and his family were in danger.3

Captain Heald received orders to abandon the fort and head to Fort Wayne. Heald, Kinzie, the fort's Indian agent, William Wells, and their Indian allies (Miami nation) left on August 15th, along with an estimated 90 people, and headed to Fort Wayne. However, the Potawatomi's attacked them a mile after they fled, leaving 52 dead. Those who survived were taken as prisoners of war, but John Kinzie and his family, escaped. The following day the fort was burned to the ground. Many years passed before settlers returned to the area.4

The battled quickly turned into a rallying cry for Americans, who deemed it a "massacre," notably by the nation's newspapers. It is a legacy that remains, as the first of four stars on the Chicago flag serve as a reminder of the fallen victims. Much of the memory is provided to Americans by the words of Juliette M. Kinzie's 1856 Wau-Bun: The "Early Day" in the North-West. Her descriptions led to the creation of the 1893 monument that symbolized the "brutal" nature of the "massacre." 5

Debate ensues over the true descriptions or how the event is remembered. As is often the case, the memory of the event has its own history. In truth, it was a battle that existed as a larger-scale war. It was also part of a lengthy, complicated history between English, French, Americans, and the many Indian nations that existed in the region.6  More than that, this had been Indian country for hundreds (and more) years prior to the arrival of Americans - the vast majority of established roads and navigation networks were built and organized by Native Americans.7 To wit: the monument represents the legacy of "memory," more than the true events that occurred on August 15, 1812.8

1 Today, the flow of the Chicago is reversed. As a result of polluted waters during the Industrial Revolution, engineers reversed the flow of the river away from Lake Michigan, the city's source of drinking water. 2 Dr. Ann Durkin Keating, "Fort Dearborn," chicagohistory.org, last accessed August 31, 2016, http://www.encyclopedia.chicagohistory.org/pages/477.html. See also, Dr. Keating's more extensive analysis in her monograph, Rising Up From Indian Country: The Battle of Fort Dearborn and the Birth of Chicago (Chicago: University of Chicago Press, 2012). 3 Ibid. 4 Ibid. 5 Ibid. 6 Numerous works exist regarding this subject. The most comprehensive being Richard White, Indians, Empires,and Republics in the Great Lakes Region, 1650 - 1815 (Cambridge: Cambridge University Press, 1991); Two others that prove valuable regarding this discussion are Colin G. Calloway, The Shawnees and the War for America (New York: Penguin Books, 2007) and Christiana Snyder, Slavery in Indian Country: The Changing Face of Captivity in Early America (Cambridge: Harvard University Press, 2012). 7 Keating, Rising up from Indian Country, 238-244. 8 For reference, a terrific study on history and memory can be found in a study of a famous Civil War Battle, Pickett's Charge, and how it's remembered. See, Carol Reardon, Pickett's Charge in History and Memory (Chapel Hill, NC: University of North Carolina Press, 1997).