Located in the heart of Greenville, Falls Park is where the city got its start. Today, it is a popular place for recreation, but for several decades it was the site of textile mills that contributed to the city's development in the 19th and 20th centuries. The park is named after the Reedy River Falls, which plunges 50 feet into a rocky gorge. There are several walking paths and a curved pedestrian bridge (the Liberty Bridge) that crosses over the river, giving people a view of the falls. The park also features ruins of mills and public art. 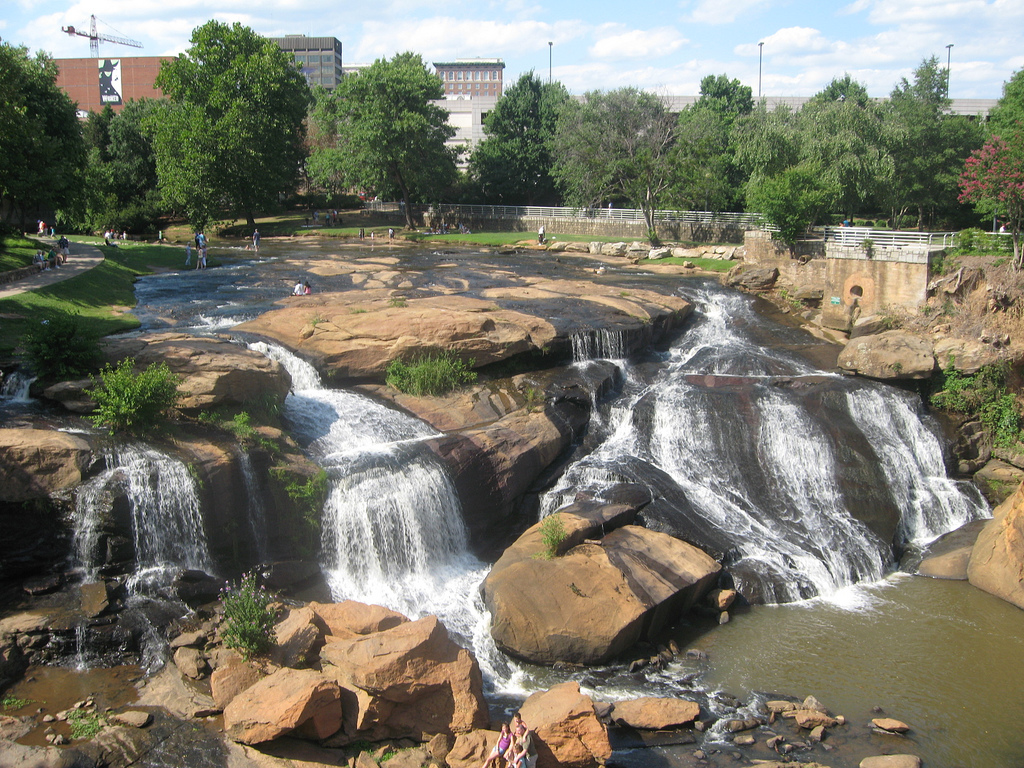 Before European settlers arrived in what is now Greenville, Cherokee Indians hunted in the area and perhaps camped in the summer along the river. The first settler to arrive was Richard Pearis, whose wife was Cherokee. Pearis built a trading post and grist mill next to the falls in 1768 and then in 1774, he purchased 50,000 acres from his son, who by birthright, was a member of the Cherokee Nation. However, Pearis sided with the British during the American Revolution and the state confiscated his business.

In 1788, a man named Lemuel J. Alston bought the property and owned it until 1815 when he sold it to Vardry McBee. By then the size of the property was over 11,000 acres. McBee built two mills, one in 1819 and the other in 1829. The remains of the 1829 mill is still visible today. McBee, who also owned a cotton factory and wool and paper mills, contributed significantly to the city's growth. He was also a philanthropist and donated land for churches, schools, and colleges.

The Reedy River was heavily polluted for much of the 20th century. Beginning in the late 1960s, this began to change. The city acquired 26 acres in 1967 and, with the help of Carolina Foothills Garden Club and other organizations, state agencies, residents, and corporations, began to clean up the park. The park began to be developed into its current form in 1990. It was added to the National Register of Historic Places in 1973.