The rowhouses, with joint walls and similar floor plans, were designed to provide private residences within the Village commercial district. Lilian Rice gave each a separate and distinct exterior along the street, with lovely gardens behind high walls in the Spanish style. Completed in 1927, two have been listed on the National Register of Historic Places. Today they remain private residences. 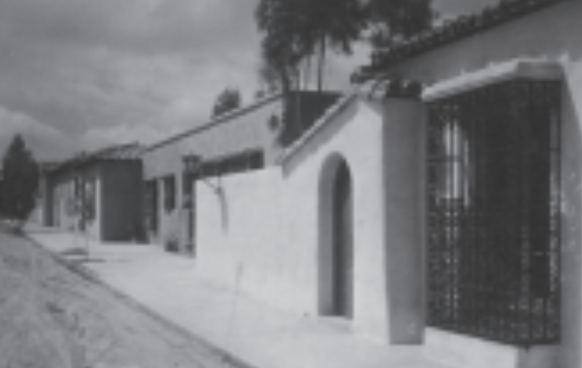 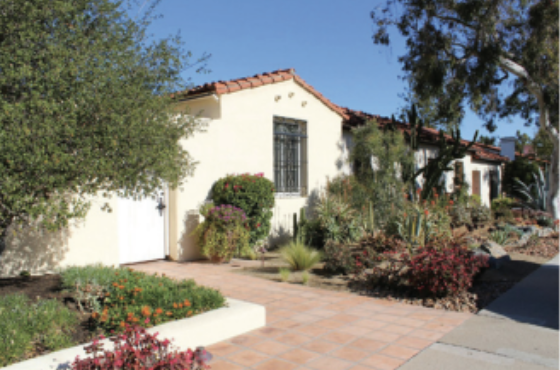 As Rancho Santa Fe began to grow in population in the 1920s, additional housing space was needed in the center of town. The SFLIC commissioned Lilian Rice to design a block of four row houses to front on Paseo Delicias. There is a fifth row house that is believed to be designed by Rice because of its similar style and character to the other four homes. However, this has not been confirmed. Construction of the row houses began in 1926 and the finished product (completed in 1927), which has been noted as one of Rice’s finest achievements, resembles the style of the Old World Spanish village homes.

The building marks the full maturity of Rice’s style because of the separate exterior facades created from different materials and colors that make the homes appear as if they were built separately over time, despite sharing joint walls and having similar floor plans. 50 percent of each unit's property is occupied by patio and garden space and in line with the true Spanish style, these were surrounded by tall stucco walls to ensure privacy for its occupants and to allow for the intermingling of indoor and outdoor space. In addition, much like the La Flecha house, the row houses were also built with modern electric appliances.

A unique fact about the construction of the row houses is that since construction of the row houses began after the four units were sold, Rice was able to tailor plans to the buyers’ desires and requirements. Through consultations with her, buyers were able to adjust the number of bedrooms and the placement of other rooms, such as dining rooms and kitchens, to fit their needs.

Today, two of the row houses, the Spurr-Clotfelter Row House and the Megrew Row House/Pearl Baker Row House, have been listed on the National Register of Historic Places.

This row house was constructed for the landscape architect for the SFLIC, Glenn Moore. Ida May, his wife, was the first female

postmaster in RSF. This house is often referred to as “Casa Blanca” because of its white stucco facade.