The Aul building was constructed in 1906 for Charles A. Aul as a store and apartment building. Construction cost $25,000. For a period of time the Aul Building was the headquarters of the Ohio County Equal Suffrage League. The League was formed in 1913 and campaigned for women’s suffrage in West Virginia and the ratification of the 19th Amendment.

This 1916 advertisement for the West Virginia Equal Suffrage Association lists 1224 Chapline Street as the headquarters for the Ohio County Equal Suffrage League. 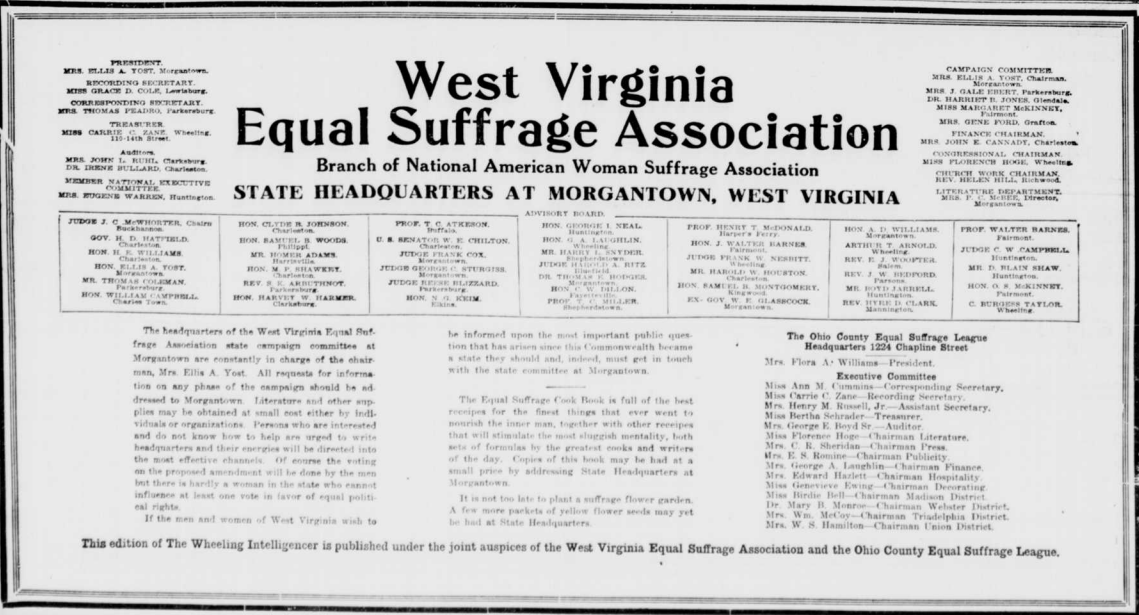 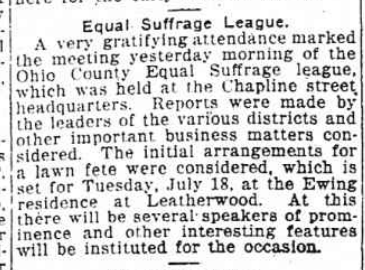 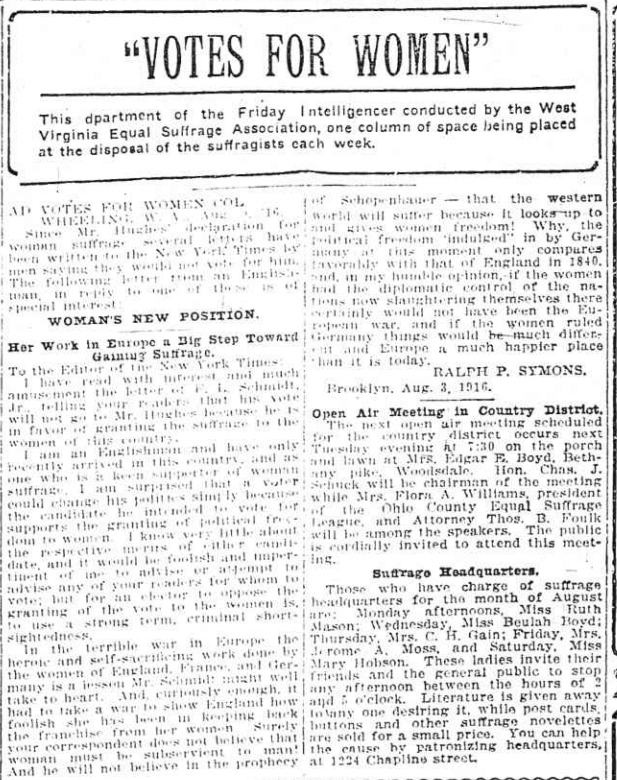 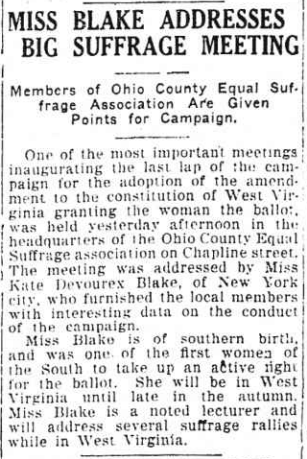 The Ohio County Equal Suffrage League was the revitalization of an earlier organization. The Wheeling Political Equality League was founded November 14, 1895 at Dr. Harriet Jones’ home. This was a consequence of efforts by the National American Woman Suffrage Association (NAWSA) to spur a women’s suffrage movement in West Virginia. By 1895, West Virginia was one the few states in the country that had no organized movement for suffrage equality and the NAWSA sent Rev. Henrietta G. Moore to do a series of speaking engagements in West Virginia to increase interest. Dr. Jones hosted Rev. Moore at her home on November 14, 1895 and the gathered women organized the Political Equality League. Jones was elected president of the suffrage club with Jennie B. Wilson, Annie Caldwell Boyd, and Fannie Wheat as the other founding officers.

The Wheeling Political Equality Club was one of the most active and long-lasting suffrage clubs in West Virginia. There was a lull in activity around 1902, but in January 1905 Wheeling was in the process of rewriting the city charter and women took the opportunity to advocate for suffrage to be included in the new charter. Wheeling women reformed as the Woman’s Municipal League during the city charter process, spurred by Political Equality League president M. Anna Hall. National leaders Dr. Anna Howard Shaw and Kate Gordan also spoke during the Wheeling charter campaign.

Suffrage activity in Wheeling reenergized again after 1912 after the suffrage parade in Washington, D.C. around President Woodrow Wilson’s inauguration. Dr. Harriet B. Jones was one of three Wheeling women who marched in the parade and when the women arrived back from the capital city they held a meeting in the Market Auditorium that reorganized the original Political Equality Club and the Woman’s League into the Ohio County Equal Suffrage League.

Hoge, Florence. “Miss Florence Hoge Tells of the Forming of Suffrage Organizations in Ohio County: Their Contest for Recognition Has Been Most Spirited.” Wheeling Intelligencer, May 1, 1916. Fighting the Long Fight: West Virginia Women and the Right to Vote. A West Virginia Archives and History Online Exhibit. Accessed January 17, 2022. http://archive.wvculture.org/history/exhibitsonline/suffrage/suffragewheelinggroup.html.