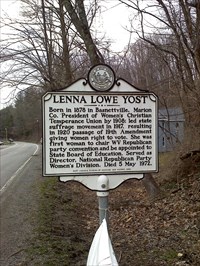 Lenna Lowe was born in Basnettville in 1878, married Ellis Yost in 1899, and moved to Morgantown in 1905. Yost campaigned for temperance and the right to vote for women within West Virginia, serving as president of both West Virginia’s Women’s Christian Temperance Union and the West Virginia Equal Suffrage Association. Lenna Lowe Yost was a driving forece behind West Virginia’s ratification of the 19th Amendment in 1920. In addition, she worked closely with the state’s Republican Party and advocated female education in West Virginia. In both politics and reform, Yost achieved many “firsts” for women at the national and state levels.