Pittsburgh’s first suffrage parade held its closing ceremonies near this approximate location on May 2, 1914. It was one of many such events organized across the United States between the first Woman Suffrage Procession held in Washington, D.C. in 1913 and the passage of the Nineteenth Amendment in 1920. The Equal Franchise Federation was primarily responsible for organizing the Pittsburgh parade in 1914, an organization founded and led by white suffragists. The event is notable, however, as the only suffrage march in the United States in which Black women held positions on the planning committee and the procession was integrated. This location is, as it was in 1914, public space and is accessible twenty-four hours a day. The Carnegie Museum has also created a miniature reconstruction of the parade, which can be viewed during its regular operating hours. 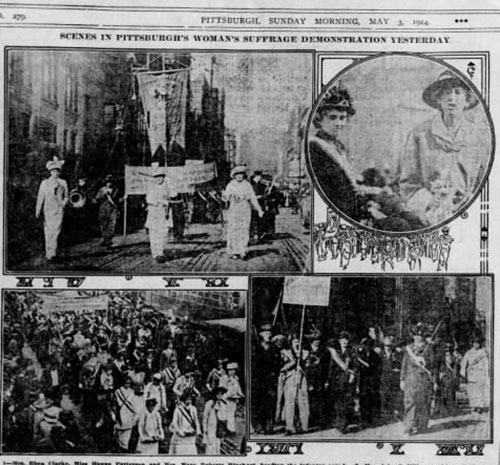 Some of the Organizers of the 1914 Suffrage Parade 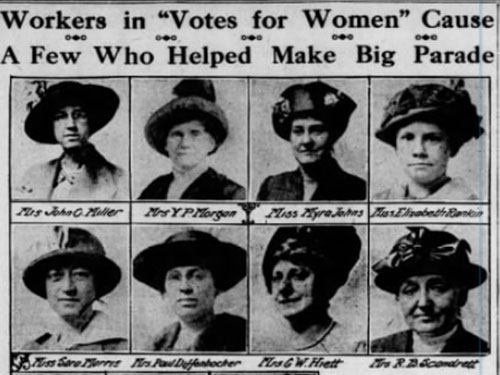 Leaders of the 1914 Suffrage Parade 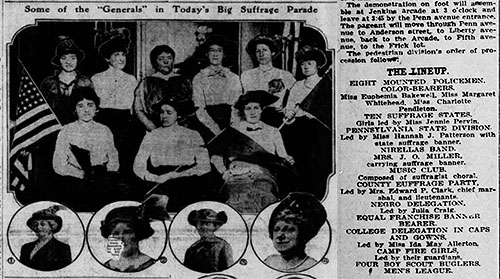 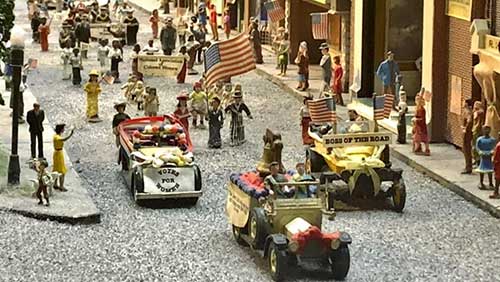 Famous suffragists Alice Paul and Lucy Burns of the National American Woman Suffrage Association held the first suffrage parade in the United States in Washington, D.C. on March 3, 1913, the day prior to Woodrow Wilson’s first inauguration as president. Paul and Burns borrowed the idea for a suffrage parade and many other tactics from Emmeline Pankhurst of Britain’s Women’s Social and Political Union, an organization noted for its provocative political activities. Such activities, coordinated nationwide across the United Kingdom, were designed primarily to draw public attention to the cause of women’s suffrage and put pressure on male officials to make opposing that cause politically inconvenient. The Woman Suffrage Procession, as Paul and Burns called their first parade in Washington, D.C., was part of a much larger effort on their part to mimic the Women’s Social and Political Union by leading a nationwide movement in the United States with a shared goal, coordinated schedule of protests, and common set of political tactics. The endeavor brought new intensity to the women’s suffrage movement on a national stage after decades of crawling state-by-state progress, with parades, protests, and eventually hunger strikes drawing levels of attention to the cause that federal officials were ultimately unable to ignore.

The suffragists of Pittsburgh and western Pennsylvania, as in most areas of the United States, embraced this renewed intensity with enthusiasm and creativity. The women’s suffrage movement had existed in the state of Pennsylvania since 1852, when Quaker activists organized the state’s first women’s suffrage convention in Chester County. For many women in Pittsburgh, support for suffrage grew out of their participation in the temperance movement. Believing alcohol consumption made men more likely to abuse their wives and deplete family finances, women in Pittsburgh and across the United States fought tenaciously in support of prohibition laws. Many of the women that helped form Allegheny County’s chapter of the Women’s Christian Temperance Union in 1874 went on to become the backbone of the women’s suffrage movement in western Pennsylvania.

For others, on the other hand, the suffrage movement was from the very first intertwined with the issue of the abolition of slavery and civil rights for African Americans. Many of Pennsylvania’s early suffragists began their political lives as abolitionists and built their organizations on a commitment to achieving both votes for women and an end to the institution of slavery. For at least a portion of such activists, this commitment continued after emancipation, with the Equal Rights Association of Philadelphia organized in 1866 to gain votes for women and African Americans alike. Still, as in many other states, women’s suffrage organizations in Pennsylvania separated along racial lines more often than not. In Pittsburgh Black women (particularly in the Hill District) had been active in the cause of suffrage since 1894, when the Aurora Reading Club organized to give its members a space to discuss political events. By the 1910s, Black women in the city led by noted activists Daisy Lampkin, Grace Lowndes, and Emma Writt had organized chapters of the Lucy Stone and Anna Shaw leagues to coordinate their suffrage activities.

White women led by Jeannie Bradley Roessing, Julian Kennedy, and Mary Blakewell, meanwhile, formed the Allegheny County Equal Rights Association in 1904 and later the Equal Franchise Federation in 1910. These women were responsible for the implementation of the “Pittsburgh Plan,” a slate of political activities meant to draw attention to the cause of suffrage across the region and state. Most notably, suffragists cast a replica of the Liberty Bell and toured it across the state of Pennsylvania in a flatbed truck with the clapper tied down and the message that “freedom will not ring until women have the vote.” Lampkin, Lowndes, and Writt, meanwhile, focused much of their attention on gaining support for women’s suffrage among Black men, holding lectures and meetings in tandem with male-only social organizations like the Loendi Club to draw their members into the movement. They also played a key role in coordinating local suffrage efforts with national ones. Lampkin was known for holding so-called “echo meetings” as part of this endeavor, sending representatives to national organization meetings and taking detailed notes so that Pittsburgh suffragists could hold replica meetings later.

The activities of Black and white suffragists in Pittsburgh dovetailed with the suffrage parade of 1914. Members from both groups held positions on the planning committee responsible for organizing the parade and when it took place on May 2 it became the only fully integrated suffrage march in the history of the United States. While others across the nation included Black suffragists at the ends of their parades in separate contingents, those of Pittsburgh marched both as a bloc representing the National Association of Colored Women in the center of the parade as well as intermingling throughout other sections. The parade also included a group of ten young girls wearing sashes to represent the states which had thus far approved women’s suffrage. Students from the Pennsylvania College of Women (now Chatham University), Boy Scouts, mounted policemen, marching bands, and male members of the Pittsburgh City Council also marched in the parade, which drew an estimated audience of 10,000. After marching from Monongahela Wharf through downtown the parade found its way to the Jenkins Arcade Building, where seven stands had been erected so that audience members could listen to thirty speakers voice their support for suffrage on the Frick lot.

Pittsburgh’s women’s suffrage movement, like others across the United States, faced its fair share of racial tensions and discrimination. The white women of the city and region, like so many before and after the passage of the Nineteenth Amendment in 1920, were not dependable allies in the cause of Black suffrage as Black women had been in the cause of women’s suffrage. Unlike the movements of other locations, Pittsburgh’s women’s suffrage movement featured a level of formal cooperation between Black and white suffragists that makes it stand out from its counterparts. Black and white women worked together to coordinate the fight for their shared cause both within and without the city of Pittsburgh in ways that can be considered uncommon for the period. The fact that Black and white women served together on the planning committee for the city’s first suffrage parade lends the event a distinction shared by no other such event in the history of the nation. Pittsburgh’s suffrage parade of 1914 was the only march for women’s suffrage in which Black women held formal positions of influence within the organizing structure. For that alone, the parade is worthy of note. Anyone interested in learning more about it can visit the location of its ending point near here or the Carnegie Museum during its regular operating hours.

Culgan, Rossilynne. "From Temperance to the Women’s March, a History of Women’s Activism in Pittsburgh," The Incline. January 17th 2019. Accessed August 4th 2021. https://archive.theincline.com/2019/01/17/from-temperance-to-the-womens-march-a-history-of-womens-activism-in-pittsburgh/.

"Women March with Banner and Pennant." The Pittsburgh Daily Post May 2nd 1914. 5.