The Edith Ammon Memorial Garden is located at Point State Park. It can be found surrounding the Fort Pitt Block House which is one of the oldest historical sites in Pittsburgh. The Memorial Garden has “wide pathways and attractive gardens of native plants culminating in the sandstone and bronze memorial to Edith Ammon”. Also, all of the plantings within the garden are native to Western PA. The idea for building the garden began in 2013 when the Fort Pitt Society “contacted local landscape architect, Jack LaQuatra of LaQuatra Bonci Associates, about creating a garden on the grounds of the Fort Pitt Block House”.

This is a view of the Fort Pitt Block House along with the Edith Ammon Memorial Garden that surrounds it. As you can see it is a beautiful area that is accessible to the public. 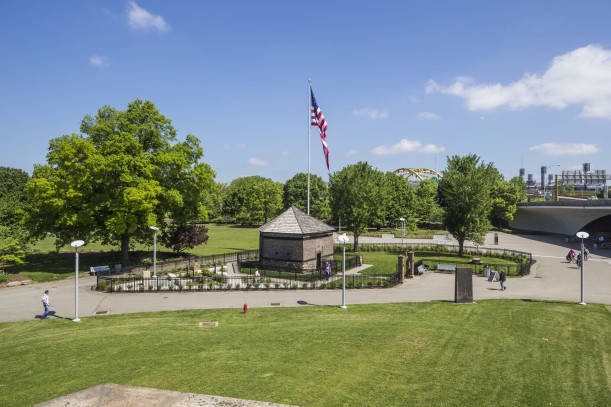 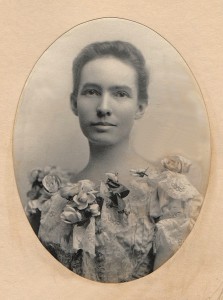 Pathway in the Edith Ammon Memorial Garden. Just as the two rivers come together at Point State Park, these two paths also come together to create another point. This is Edith's own point at the Fort Pitt Block House. 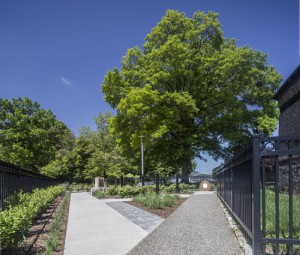 Memorial Stone and Plaque dedicated to Edith Ammon. Just as the fountain is the park's main point at the park, this plaque is the focal point of the garden. 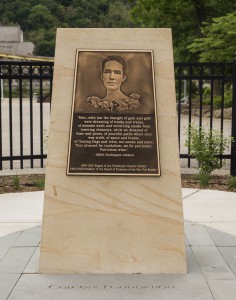 The Fort Pitt Society felt deserted when the city leaders threw out their petition for a park at the Point. This image shows how the ladies are deserted, and standing alone at the Block House in protest. With hard work and resilience, the Fort Pitt Society was able to save the block house from being destroyed. 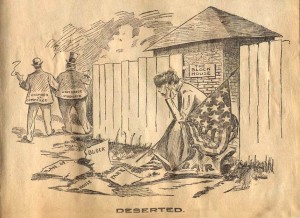 Another Aerial shot of the Fort Pitt Block House along with the Edith Ammon Memorial Garden. The garden is best viewed on a bright sunny day.

A couple enjoying the park on a beautiful day. They are stopped admiring the plaque dedicated to Edith Ammon and her fellow ladies that helped save the Block House. 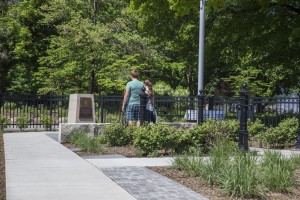 Up until 2013, the landscaping around the block house had not been utilized to its potential. This is why the Fort Pitt Society, asked LaQuatra Bonci to build a garden that would accomplish the goals of “create an attractive and welcoming outdoor space and pay tribute to those early members of the Fort Pitt Society of the Daughters of the American Revolution of Allegheny County, Pennsylvania”. The garden honors Mrs. Edith Darlington Ammon, “who served as the Pittsburgh Chapter’s regent for ten years and as president of the board of directors for the Fort Pitt Society for over a decade”. If it wasn’t for her being leader of the Fort Pitt Society, “the red-block house would have not survived for 250 years, - if her and her Victorian friends had not fought valiantly to keep it at the Point”. She waged public relations battles against “real estate developer Frank Nicola, industrialist Henry Clay Frick and the powerful Pennsylvania Railroad”. This beautiful garden can be accessed by anyone wishing to visit Point State Park in Pittsburgh.

Edith Dennison Darlington Ammon “was born in 1862 at her family’s estate, Guyasuta”. Edith married a lawyer named Samuel A. Ammon and joined the “Pittsburgh Chapter of the Daughters of the American Revolution in 1891”. Soon after joining the chapter, she began moving herself up the ladder because of her love of “Revolutionary ancestry”. At the time she joined the chapter, they were trying to gain ownership of the Fort Pitt Block House “so that it could be restored and opened to the public”. In 1894, the wonder of the Block House, Mary E. Schenley gave them the building for free. After they gained ownership of the Block House, they restored it and opened it back up to visitors

In 1901 the Fort Pitt Society had to defend the Block House from construction and industrialists who wanted to remove the house. Edith Ammon led the ladies in a hard fight to stop the “industrial development of the Point by petitioning the city for a park at the Point”. Although the group was supported by many, the Point District was sold “in 1902 to Henry Clay Frick who in turn sold the property to the Pennsylvania railroad”. When the construction on the rail yard started, the block house became surrounded with “warehouses, terminals, and tracks”.

This caused Edith Ammon to work on “drafting a bill for the state legislature to protect historic structures from eminent domain”. She spent months lobbying in Harrisburg and spoke out against the railroads. During one of her speeches, she said “Have you no history? Have you no pride? … Men who allow this precious spot to be sacrificed certainly have no pride at all. If these [historic] sites are destroyed nothing, but written pages will be left behind to tell their memory. Future generations will want to see them. We should not deny them the opportunity.”. Then in 1907, “with the help of State Representative Michael H. Kennedy of Pittsburgh”, Edith was successful when her bill was passed into law.

In 1919 Edith passed away while still serving as president of the Fort Pitt Society. This is why Edith Ammon was chosen as the person who the garden was named after. The Edith Ammon Memorial Garden honors her and the other members of the Fort Pitt Society who saved the Block House from being destroyed. Their hard work has allowed the Fort Pitt Block House to remain in its original location and act as a historic site and museum that is free and accessible to the public.

Edith once said ““Men…with but the thought of gain and gold were dreaming of tracks and trains, of massive walls and wreathing smoke from towering chimneys, while we dreamed of fame and power, of peaceful paths where once was strife, of space and breeze, of floating flags and trees, not smoke and noise. They planned for vandalism…we for patriotism. Patriotism wins.”