Dedicated in 2000, this historical marker shares the life of Genevieve Blatt, the first woman in Pennsylvania to win an election for a statewide position. Blatt later became the first woman to be nominated by a major political party for the U.S. Senate, although she lost that race to the Republican incumbent. Blatt graduated with a law degree during the Great Depression and worked a variety of jobs that utilized these skills, including drafting city codes and serving on President Johnson's advisory councils in the 1960s. Blatt became the first female appellate judge in Pennsylvania in the early 1970s and wrote an influential decision barring gender discrimination in school athletics. 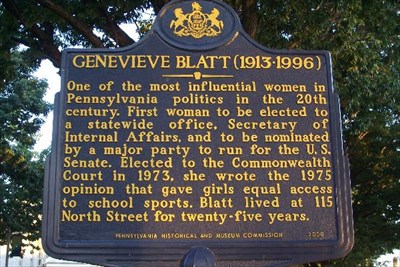 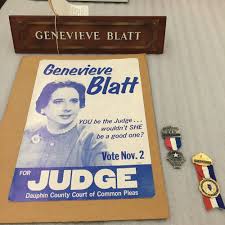 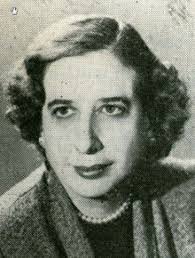 Genevieve Blatt was born June 19th, 1913 in East Brady, to George and Clara Blatt. She attended Sacred Heart High School in Pittsburgh, followed by the University of Pittsburgh where she graduated in 1933 with a B.A. in Political Science followed by a M.A. in the subject the following year. In 1937, Blatt completed her law degree from the University of Pittsburgh Law School. The year prior, she had the distinction of being the first delegate to vote for Franklin D. Roosevelt in the 1936 Democratic National Convention. She later secured an appointment as a solicitor for the city of Pittsburgh where she drafted the first ordinance regulating smokestacks. In 1947, Blatt worked as one of the founders of the Americans for Democratic Action and was also a Chief Examiner for Pittsburgh.

After an unsuccessful campaign for State Auditor General in 1950, Blatt won her race for State Secretary of Internal Affairs in 1954, becoming the first woman to win an election for a statewide position. She held this position until 1966 when she lost her re-election bid. In 1964, she was appointed to President Johnson's Consumer Advisory Council as a member until 1968. In 1956 she was also honored as a Distinguished Daughter of Pennsylvania. This honor is given to the women who have given extraordinary service and contributions to the Commonwealth of Pennsylvania. Then, in 1972 she was appointed by Governor Milton J. Shapp to fill an unexpired term on the Commonwealth Court. She won her re-election the next year. Then, ten years later, she became a senior judge of the Commonwealth Court.

One of Blatt's most notable accomplishments came while she served as a judge on the Commonwealth Court when she ruled against the Pennsylvania Interscholastic Athletic Association for gender discrimination against women in sports. Many of the same issues involved in the case are codified in case law upholding Blatt's interpretation of Title IX. Blatt retired in 1993 and died three years later in 1996 in Hampden Township, Pennsylvania. Today, a scholarship in her name is awarded to students who attend the University of Pittsburgh.