This historical marker pays tribute to Irving Female College located in Mechanicsburg, Pennsylvania. The college was founded in 1856 by Soloman P. Gorgas whom named it after the famous American writer, Washington Irving. Irving College was the first institution in Pennsylvania to grant women degrees in arts and science. It encompassed the motto, “That our daughters may be as cornerstones, polished after the similitude of a palace” to place the importance of allowing women higher education opportunities. 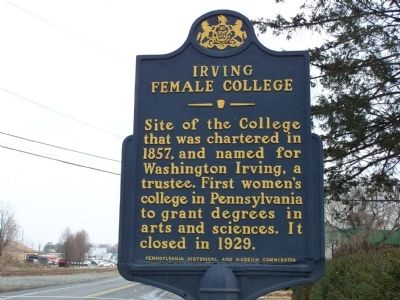 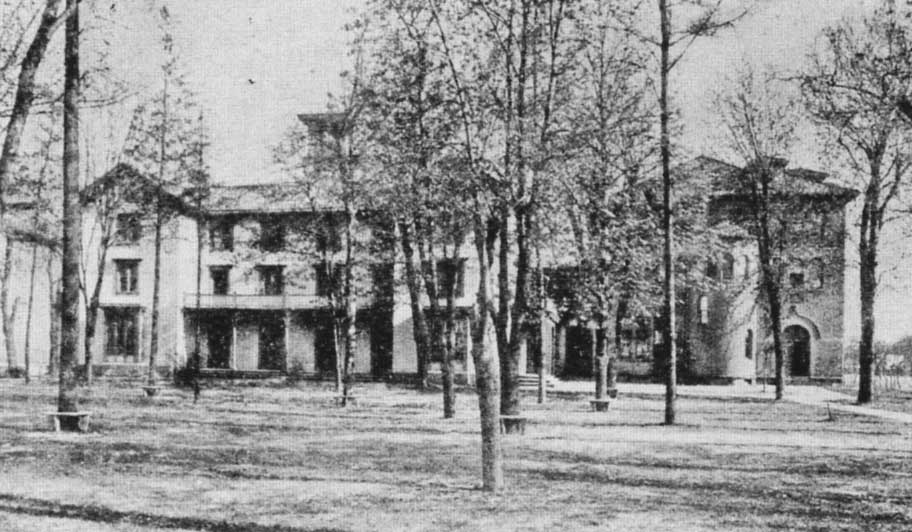 Present day Irving and Columbian Hall that were converted into private apartments in the late 1930s. 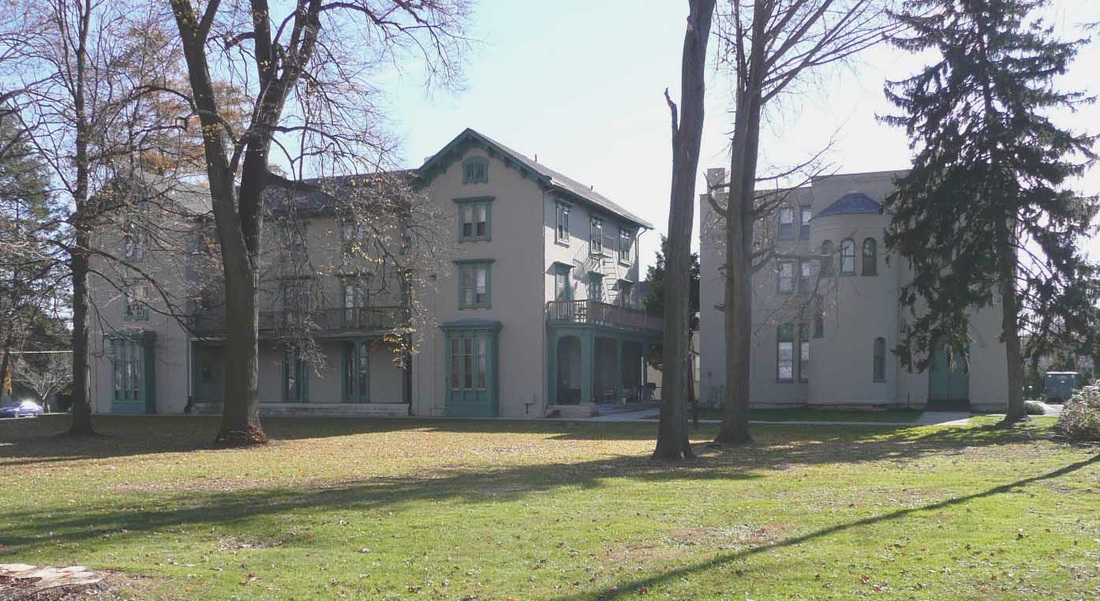 Irving College Auditorium located on the lower floor of Columbian Hall in 1910. The auditorium was set up for nondenominational chapel services. 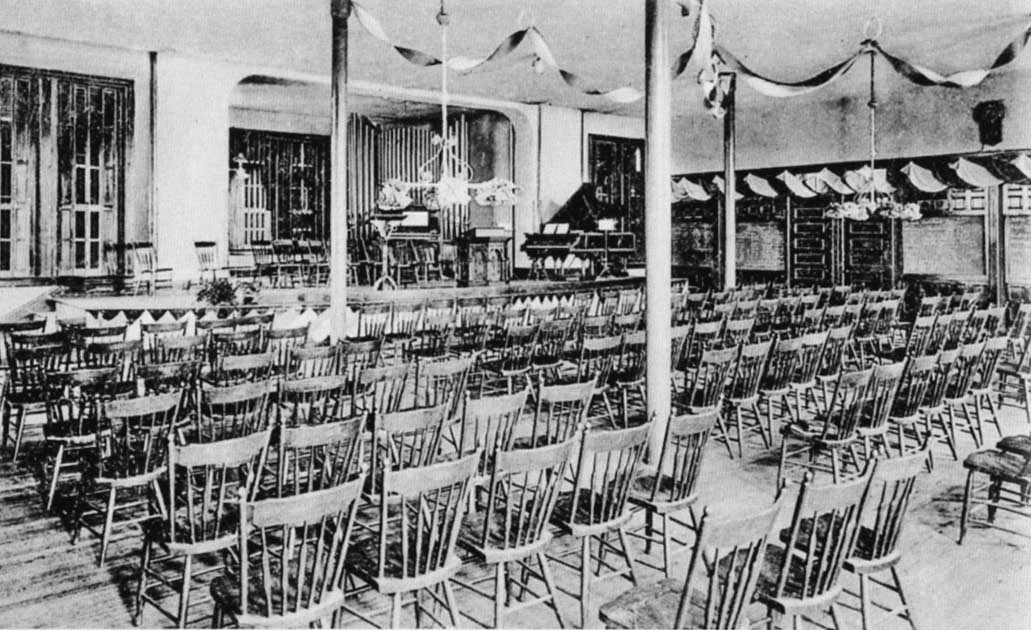 An old postcard of Irving College from 1903. 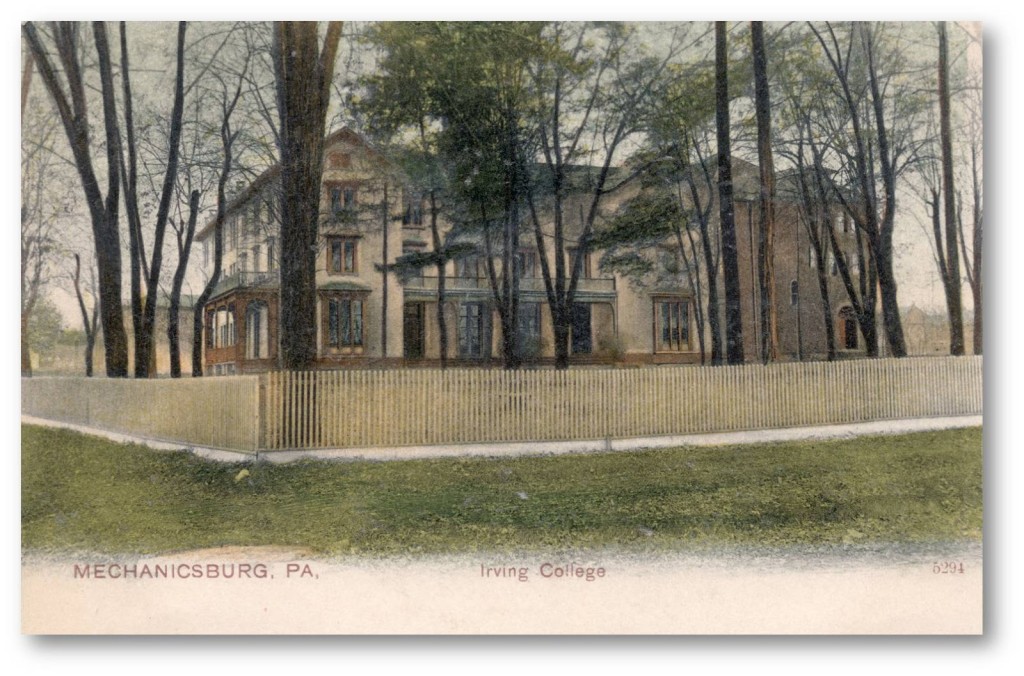 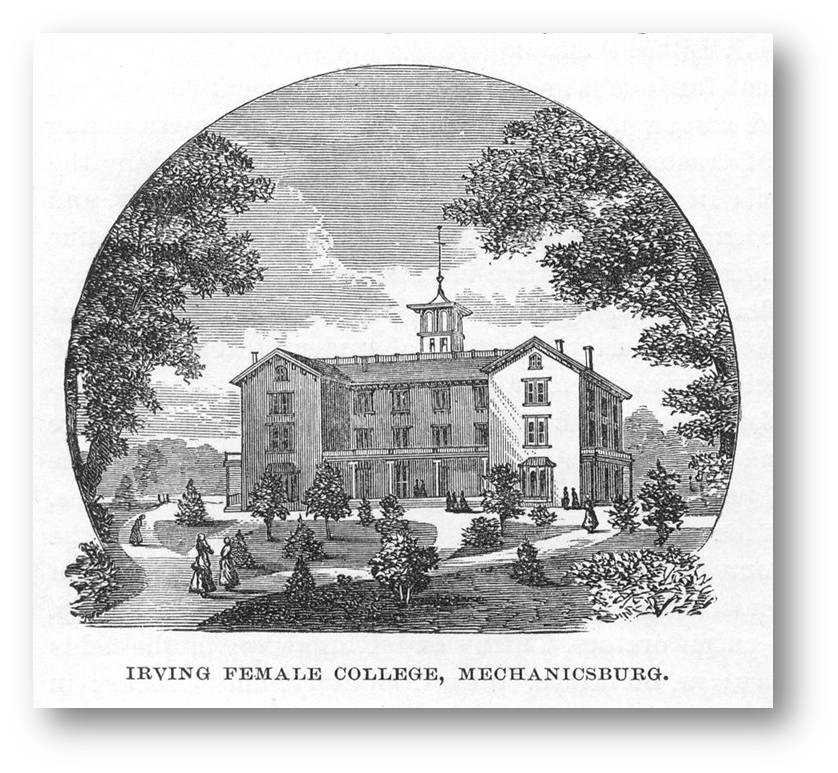 Irving College students dressed for a play standing in front of Irving Hall in 1900. 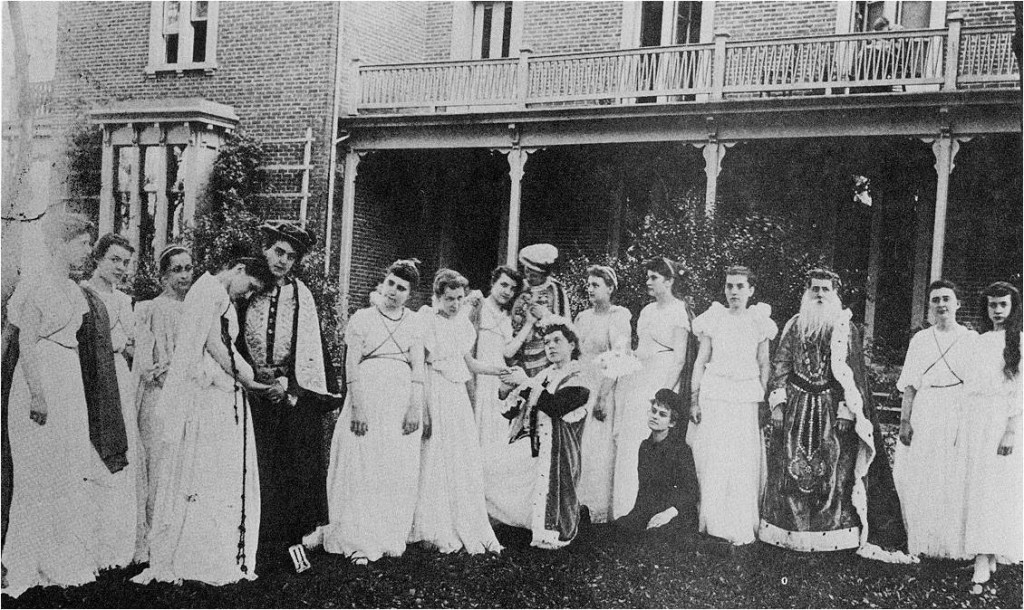 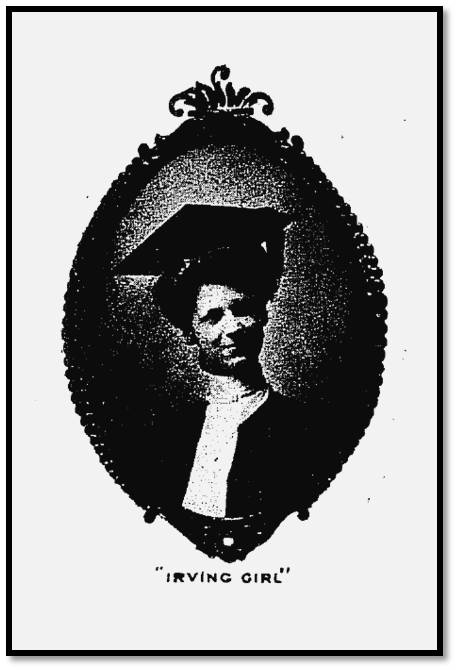 Irving Female college was the very first women’s college in Pennsylvania to grant degrees in arts and sciences. Along with being the 1st in Pennsylvania, it was only the 15th in the United States to achieve this accomplishment. The college was founded in 1856 by a businessman named Soloman Perry Gorgas who then named it after Washington Irving. Washington Irving was a famous American writer who also served on the board of trustees for the college. The home of Irving Female College is Mechanicsburg, Pennsylvania. Mechanicsburg is located just near the state’s capital Harrisburg, Pennsylvania.

The two main figures in Irving Female College’s establishment are Soloman Gorgas and Washington Irving. Soloman Gordas, a businessman from Mechanicsburg, Pennsylvania, donated the land for the college's construction. Gorgas and his fellow college board declared to name the college after the famous author Washington Irving. Some of Irving’s famous pieces include “The Legend of Sleepy Hollow” and “Rip Van Winkle” [1]. Not only was the college named after Irving, but he also sat on the board of trustees until his death in 1859. [2]

At its start, Irving Female College sat on 4.6 acres of land and consisted of two main buildings. Irving Hall, the original building, entailed classrooms and dormitories of the college. The newer of the two buildings, Columbian Hall was constructed in 1892. Columbian Hall added 40 more dormitories located on the upper floor and an auditorium on the lower floor. The enrollment for Irving College steadied around 100 students per year. The faculty included around 20 people, most of them part time teachers. The students at Irving College could pursue the degrees in English literature, and most notably for arts and sciences. Being the first college in Pennsylvania to offer women degrees in arts and sciences was a great accomplishment that set examples for future colleges. Students could also pursue two year certificate programs for piano, home economics, and secretaryship.[7]

Irving College endured much change throughout its lifetime. Three years after the school started, the past Civil War brought hardships to its home in Mechanicsburg, PA and Irving College closed from 1883-1886. In 1891 Irving College introduced its new president, Edmond Ernest Campbell who also bought the college off of previous president Mary Kessler. Under Campbell’s presidency, the school thrived by expanding three times and maintaining the enrollment of around 100 students. Eventually Irving College and the "young ladies academy model" lost its supporters as a result of competition from larger colleges.[3] Already on a decline, Irving College shut their doors in 1929 after the Great Depression and financial difficulties took an even larger toll on it. In 1930, a group of alumnae tried to raise money in order to reopen the college but were unsuccessful in doing so. [6]

Present day Irving College has changed quite a bit since it first developed. The two main buildings Irving Hall and Columbian Hall still exist but have since been turned into apartments. Argyle, the residence of the college president, was demolished in 1991. This was done in order to make room for the expansion of Seidle Memorial Hospital Complex. This hospital complex now sits on the original site of the college.[5] A historical marker was placed in 1954 by the Pennsylvania Historical & Museum Commission to commemorate and acknowledge the important historical college. This marker is placed on the corner E. Main and Filber Street in Mechanicsburg, PA. The marker states “Irving Female College: Site of the College that was chartered in 1857 and named for Washington Irving, a trustee. First women’s college in Pennsylvania to grant degrees in arts and sciences. It closed in 1929.”.[4] In 1983, Irving College got listed in the National Register of Historic Places. [3]

Irving College’s motto, “That our daughters may be as cornerstones, polished after the similitude of a palace.” was well embodied during its lifetime [2]. It achieved an incredible accomplishment of being the first institution in Pennsylvania to offer women degrees in science and art. Although the college is closed today, its buildings still stand along with a historical marker to acknowledge an important part of women’s history.

6. Sack, Saul. The Higher Education of Women in Pennsylvania. Philadelphia, 1959.