Often called the "Godmother of Rock 'n Roll" and the "original soul sister," gospel singer-songwriter Sister Rosetta Tharpe was famous for her spiritual lyrics, rhythm-and-blues musical style, and distorted electric guitar playing which later became iconic in the rock 'n roll genre. Tharpe influenced artists such as Elvis Presley, Johnny Cash, Chuck Berry, and Little Richard, and in recent years, many have rediscovered her music. After living in Richmond for a decade during the height of her career, Tharpe moved to Philadelphia in 1957. She was a first-generation resident of Philadelphia's Yorktown neighborhood where she lived in a house on Master Street until her death in 1973. On October 24, 2011, a historical marker was placed in front of the former music legend's home by the Pennsylvania Historical and Museum Commission. According to author Gayle Wald, Tharpe responded to claims about the "new" style of rock and roll by demonstrating that music, like everything else, has a history. "Oh, these kids and rock and roll," Tharpe exclaimed according to the author's accounts, "this is just sped up rhythm and blues." 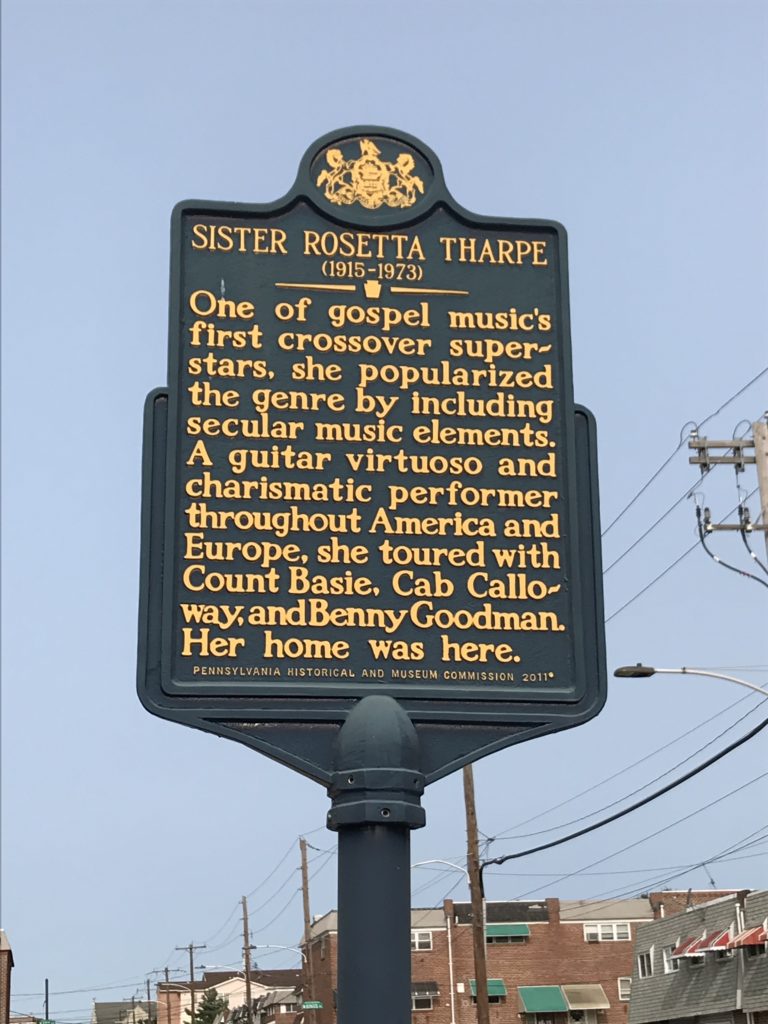 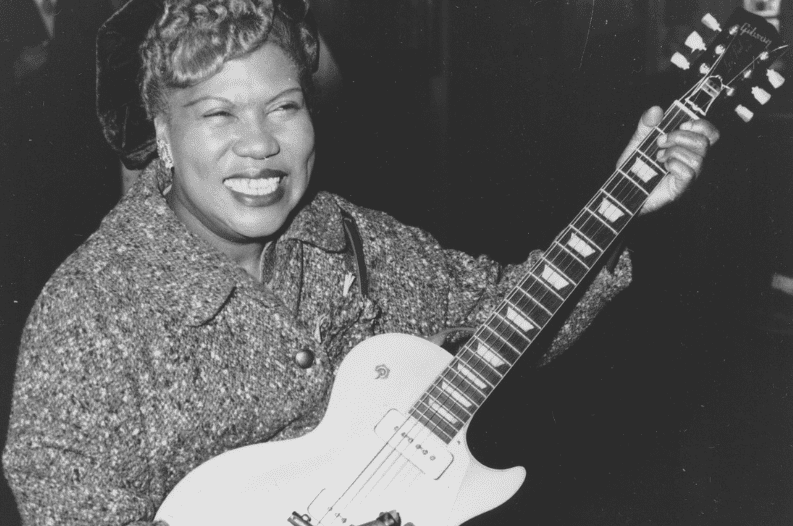 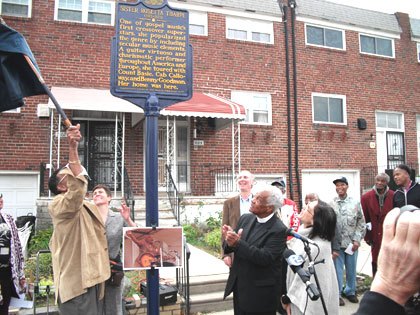 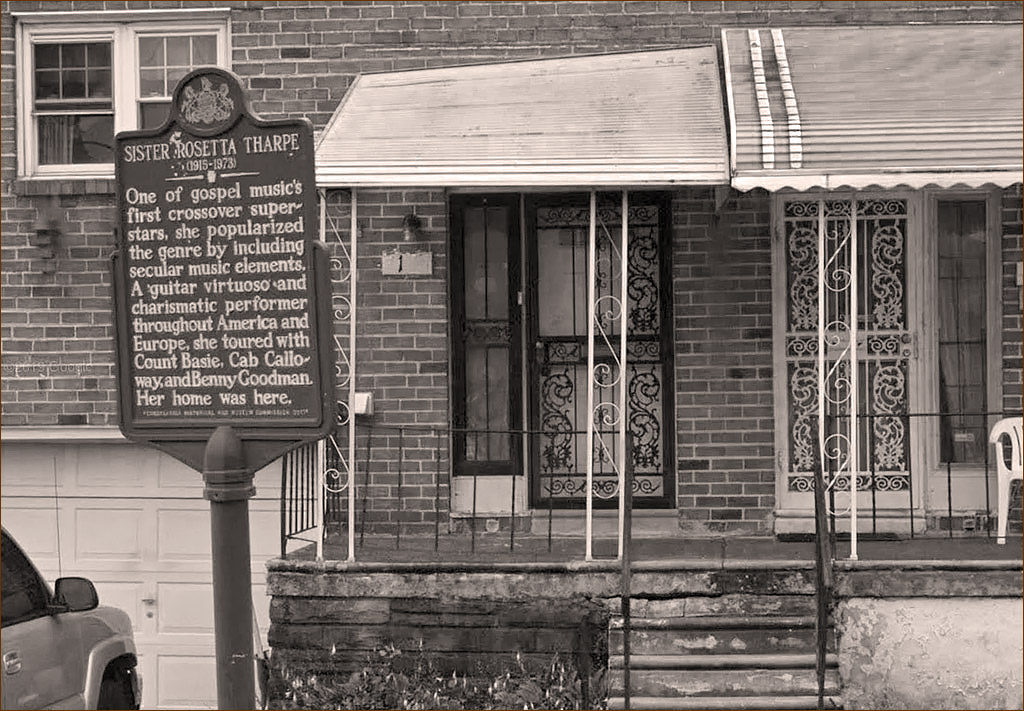 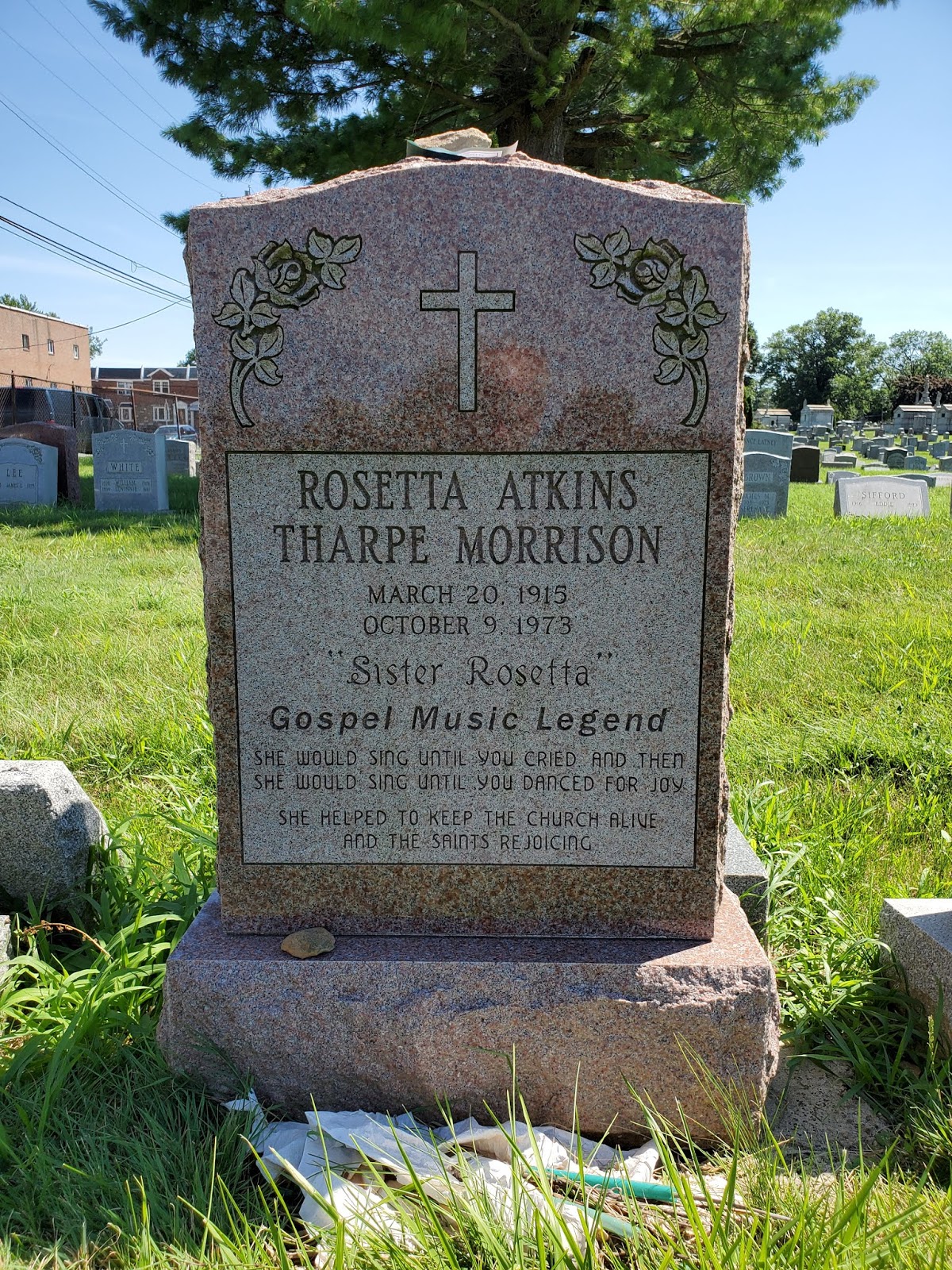 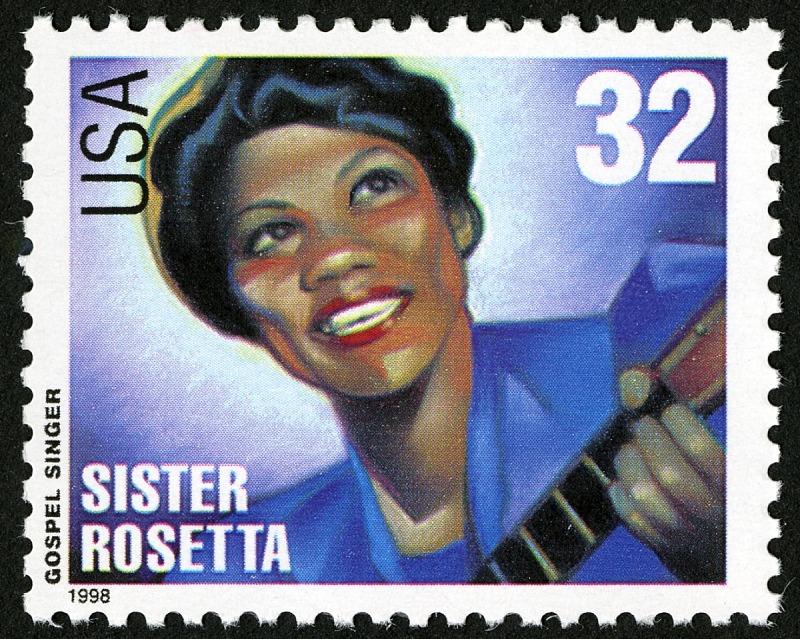 Rosetta Tharpe was born as Rosetta Nubin in the small town of Cotton Plant, Arkansas on March 20, 1915. By the time she was six, she was already performing for an audience at the Church of God in Christ at the encouragement of her spiritual mother who was a member of the congregation. In 1934, Rosetta Nubin married Thomas Thorpe. After four years, Rosetta obtained a divorce and moved to New York City where she adapted her former husband's surname to "Tharpe" for to create what would become her stage name, Sister Rosetta Tharpe. The musician would use this name as her public name for the rest of her life.

Sister Rosetta Tharpe’s recording career began in 1938 when she was just 23 years old. While her records, which mixed secular musical style with gospel, were controversial to some church members, others appreciated the new style and her music was popular with the young and general public. Audiences were frequently taken aback by Tharpe’s virtuosic skill with the electric guitar as well her distinctive distorted style of playing which would heavily the rock ‘n roll genre in the years to come. Her 1944 hit record “Strange Things Happening Every Day” is widely regarded to be one of the first rock ‘n roll songs ever recorded.

In 1947, while playing a show at the Macon City Auditorium, Sister Rosetta Tharpe heard a 15-year-old Richard Wayne Penniman sing before she came on stage. Impressed by his talent, she invited the teen to sing with her during the concert and even paid him for it afterwards. It was Penniman’s first time performing for an audience outside of church. This experience inspired him to keep pursuing his passion for music. Penniman later become world-renowned rock ‘n roll musician Little Richard.

While touring internationally in 1957, Tharpe's Richmond home and all of her belongings were seized on account of unpaid taxes and auctioned off by the city. After this incident, Tharpe moved with her husband to Philadelphia. When the city created the Yorktown Neighborhood in 1960, Sister Rosetta Tharpe became one of the first homeowners in the now-historic black neighborhood. While living there, Tharpe joined Bright Hope Baptist Church where she regularly sang for Sunday services. She also embarked on one of the most successful professional periods of her career, releasing 5 LP's and receiving a Grammy nomination for her album Precious Memories in 1968.

That year, however, proved personally difficult for Tharpe. Her mother, who had been a major influence in her life, died and Tharpe was diagnosed with diabetes. She spent the next two years struggling with depression, and then suffered a stroke in 1970 that resulted in the amputation of her leg. On October 9, 1973- right before a scheduled recording session- Tharpe had a second stroke. She was transported to Temple University Hospital where she died at the age of 57. Her body was buried in an unmarked grave at Northwood Cemetery.

In the years since Sister Rosetta Tharpe's death, however, there has been a resurgence of interest in her life and work. On July 15, 1998, she was honored by the US Postal Service with a 32-cent commemorative stamp. Thanks to the work of her lifelong friends and fans, in January of 2008 Pennsylvania Governor Edward G. Rendell declared January 11th "Sister Rosetta Tharpe Day" in Pennsylvania. A benefit concert was also held that month to raise money for a headstone which was placed at Tharpe's gravesite later that year. On October 24, 2011, a Pennsylvania historical marker plaque was unveiled outside of Sister Rosetta Tharpe's former Philadelphia home at 1102 Master Street. Reverend Joe Williams, who sang with Tharpe at her last concert, performed at the ceremony. Today, the house is owned by Annie Morrison, the widow of Tharpe's late husband and former manager Russell Morrison.

This extended walking tour includes a variety of landmarks and historical markers related to LGBTQ rights and culture in the city of Brotherhood Love. The tour begins at the location of what many consider to be the first sit-in for gay rights and proceeds to a historical marker dedicated to the history of the AIDS Library of Philadelphia among other stops.