McCulloch Park, in Evanston IL, is named for one of the most prominent among 20th-Century suffragists, Catharine Waugh McCulloch (1862-1945). McCulloch began her legal career in 1886 and was the first woman in the U.S. to serve as a Justice of the Peace. She was legal advisor to the National WCTU and the National Woman’s Suffrage Association, and was partner with her husband in their Chicago law firm. When the campaign for Illinois suffrage ended successfully in 1913 (largely through McCulloch’s tireless efforts), she was greeted by a torchlight parade of happy supporters when she arrived home in Evanston. 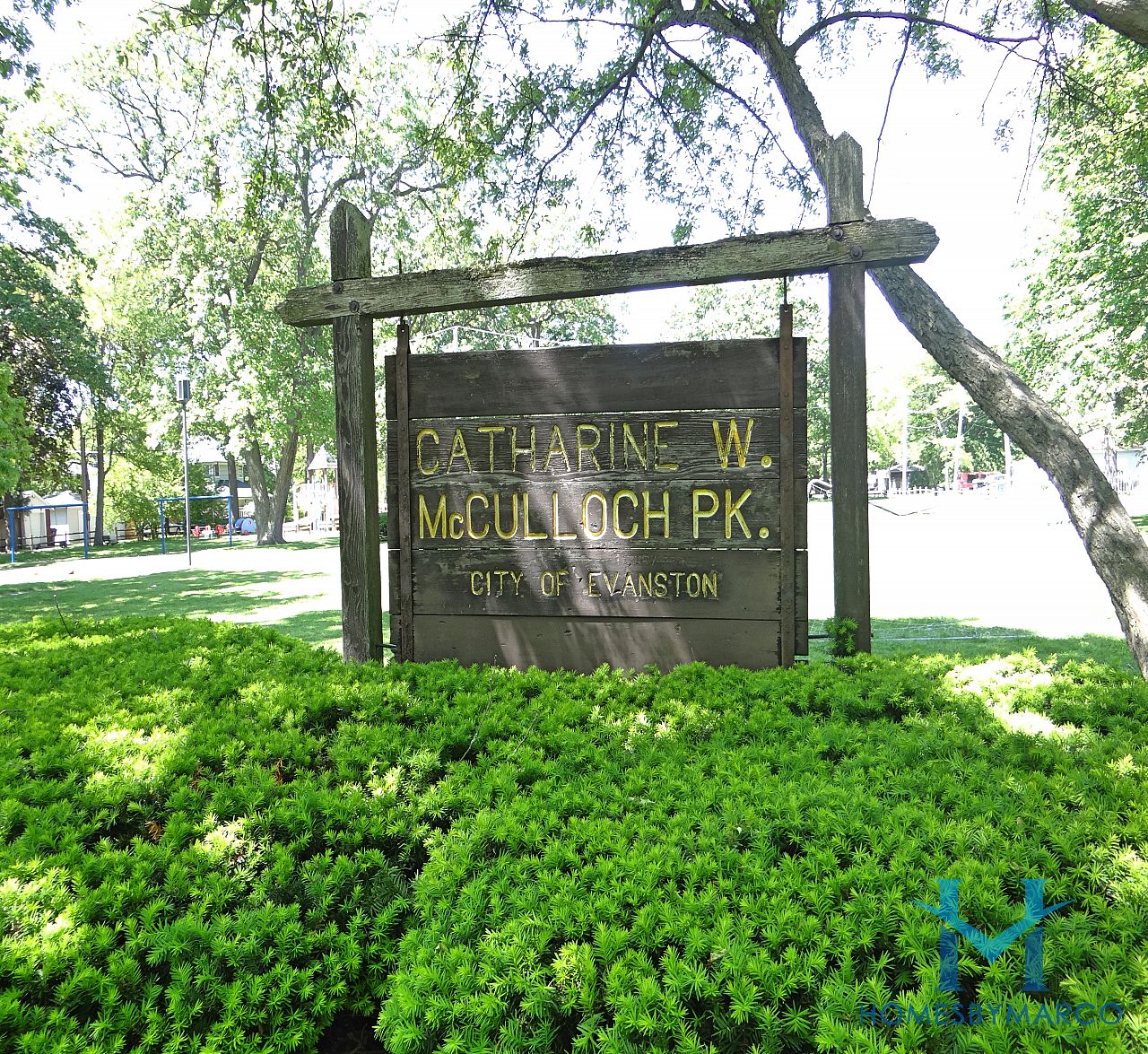 Catharine Waugh McCulloch was a lawyer, suffragist, political activist, supporter of women’s rights and mother who lived in Evanston during a time of great change both in the political and social arena. She was the first woman in Illinois to serve as a Justice of the Peace (elected April 2, 1907 and served two terms) and is largely responsible for the passing of the 19th Amendment to the Constitution allowing all citizens to vote.

Catharine McCulloch was born Catharine Gouger Waugh on June 4, 1862, in Ransomville New York to parents Susan Gouger and Abraham Waugh. Her family moved to a farm in Illinois when she was five years old and her younger brother was just two years old. It was her father who encouraged her to study hard and prepare for a profession, and in 1878 Catharine entered Rockford College Female Seminary (now Rockford College) and graduated in 1882, first in her class.

Initially, it was a challenge for McCulloch to find a position at an established law firm, turned away by male attorneys who told her to take in sewing and one even offering her a clerkship in exchange for sexual favors. So, in 1887, she returned to Rockford and opened her own law practice. She did this with support from members of the Equity Club, the first association of women lawyers in the country and one in which McCulloch was instrumental in establishing while she was a law student. McCulloch’s client base consisted of women tormented by problems relating to lack of legal status, especially as related to wage discrimination, divorce, probate, child custody, and domestic abuse. By representing these issues, she emerged as a leading figure among the advocates for the women’s movement and a leading advocate of woman suffrage in Illinois.

In 1890 she married Frank McCulloch and they moved to an apartment in Chicago. They had four children together, son Hugh born 1891, son Hathorn born 1899, daughter Catharine born 1901, and son Frank born 1905. With their family expanding, they moved to a larger house in Evanston in 1895. In addition to their matrimonial union, Frank and Catharine opened a law partnership in Chicago where they continued to work on women’s rights and in 1889, Catharine practiced before the United States Supreme Court.

It is clear from McCulloch’s list of achievements that she was a woman who firmly believed women were just as equal to men in every arena and she dedicated her entire life to achieve not only equality, but justice for women. She affected change in the city of Evanston, the state of Illinois, and the entire country through her involvement with the Legislative Committee of the Illinois Equal Suffrage Association (IESA), which she was part of for 22 years. She devised a strategy to allow women to vote for president and in other elections not constitutionally limited to men. This bill was introduced in 1893 and every year thereafter. She framed the legislation so it neatly sidestepped the Constitution, allowing women to vote for presidential electors and other government officers not mentioned in the Constitution. Illinois was the first state east of Mississippi River to pass such a law and others soon followed, leading to the universal suffrage amendment in 1920.

In addition to campaigning for equality for women in the social and political sphere, she also worked to protect women in the domestic setting. She wrote a bill that strengthened rape laws and raised the age of consent in Illinois. She wrote plays which called attention to a woman’s need for greater protection from abusive or alcoholic husbands and published works of nonfiction and fiction to bring attention to laws relating to mother and child. She campaigned tirelessly to elect women to prominent positions of power and was careful to follow the correct procedures, distancing herself from militant suffragist groups who picketed and got themselves arrested. Instead she firmly believed women could only advance themselves through the legal channels, so she confined her own activities to lobbying, writing and speech-making. She thought “women had a special mission to purify and perfect politics” (Shultz, Rima L and Haste, Adele eds. Women Building Chicago 1790-1990: A Biographical Dictionary. Bloomington, IN; Indiana University Press, 2001).

From 1917 to 1925 McCulloch was President of the Women’s Democratic Club of Illinois. She was nominated as their first president and worked for the enactment of women’s suffrage and prohibition. After suffrage was achieved and her children grown, McCulloch spent much time traveling and exploring her life long study of the legal conditions of women. After a two week cancer-related illness, Catharine Waugh McCulloch died at age 82 in Evanston Hospital.