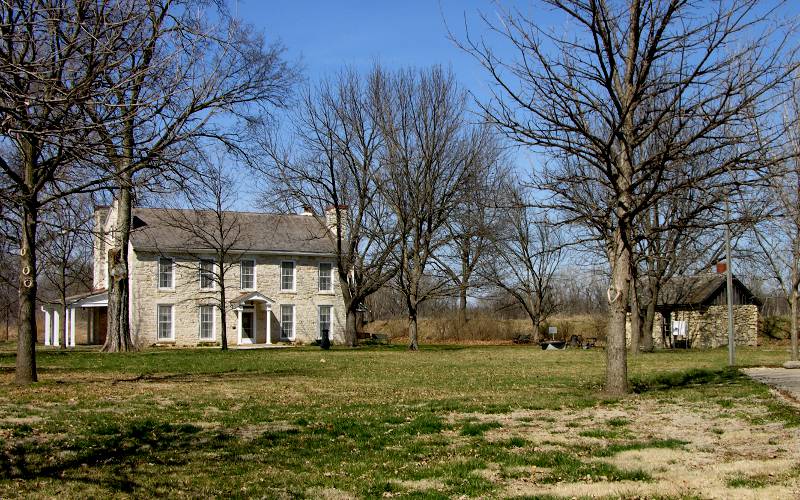 As part of a broader policy of allotment and assimilation, the U.S. Government first limited the Kanza (Kansa) people of Kaw Nation to twenty square miles of property (Kaw Reservation) in and near Council Grove. The Methodist Episcopal Church South also worked with the government to operate a mission school, fully funded by the government, which opened in 1851. The Kaw people had no desire to send their children to the school, other than orphans and other dependent children. The lack of participation forced the government to withdraw its support by 1854, but a part of the school meant for White children remained open. The Kanza people, for whom Kansas is named, eventually saw their reservation decline in size before the government forced them to move to Oklahoma. Despite their attempts to maintain their culture and way of life, the last full-blooded member of Kaw nation died in the year 2000. 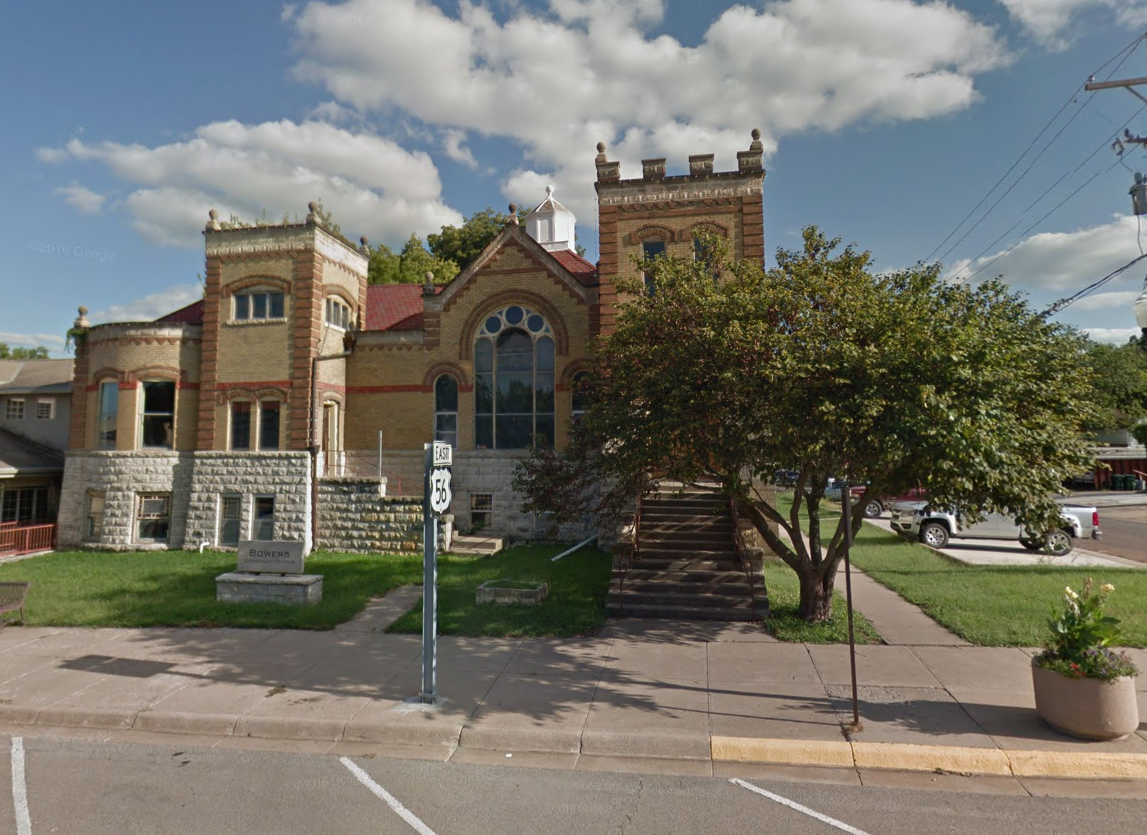 Established in 1870, the First Baptist Church built its first permanent church building in 1884 only to have it destroyed by a flood in 1903. After six years of fundraising and construction delays, the congregation finally met in the new, now-historic building in 1909. The structure enjoys a mix of Gothic Revival and Romanesque styles, part of a early-twentieth-century trend known as eclecticism. The church community used the facility until 1993 when it transitioned into a community center until 2020.

This historic library opened in 1917 thanks in part to a matching grant from Andrew Carnegie and public funds. Council Grove's library association formally organized in 1876 and submitted its grant proposal to the Carnegie Corporation in 1903, but it took organizers many years to secure the required matching funds and construct the now-historic library. Carnegie's road to his storied philanthropy included a long and complex relationship with the working class. For instance, an 1892 strike at one of Carnegie's mills culminated in hired "detectives" killing several striking workers. Later in life, Carnegie spent ninety percent of his fortune (more than $330 million in 1915 dollars) on community projects, including thousands of libraries. More than sixty of those Carnegie-funded libraries were built in Kansas, including the Council Grove Carnegie Library.

Gordon M. Simcock helped survey the area that became Council Grove, Kansas, and then he chose to make it his home along with his wife, Mary. Gordon opened a highly successful mercantile business that served people along the Santa Fe Trail, as well as nearby Native Americans. The historic home he built in 1857 speaks to his financial success. The evolution of the railroad and the displacement of the Native Americans to the Indian Territory (Oklahoma) led to the decline of his business. Still, two other wealthy entrepreneurs, David Webb followed by W. H. Marks, took ownership of the home after Simcock sold the property: Both Webb and Marks added to the home's square footage, with Marks turning the home into an apartment building. The Marks family owned the historic home until the 1970s, nearly 120 years after Simcock built the house. 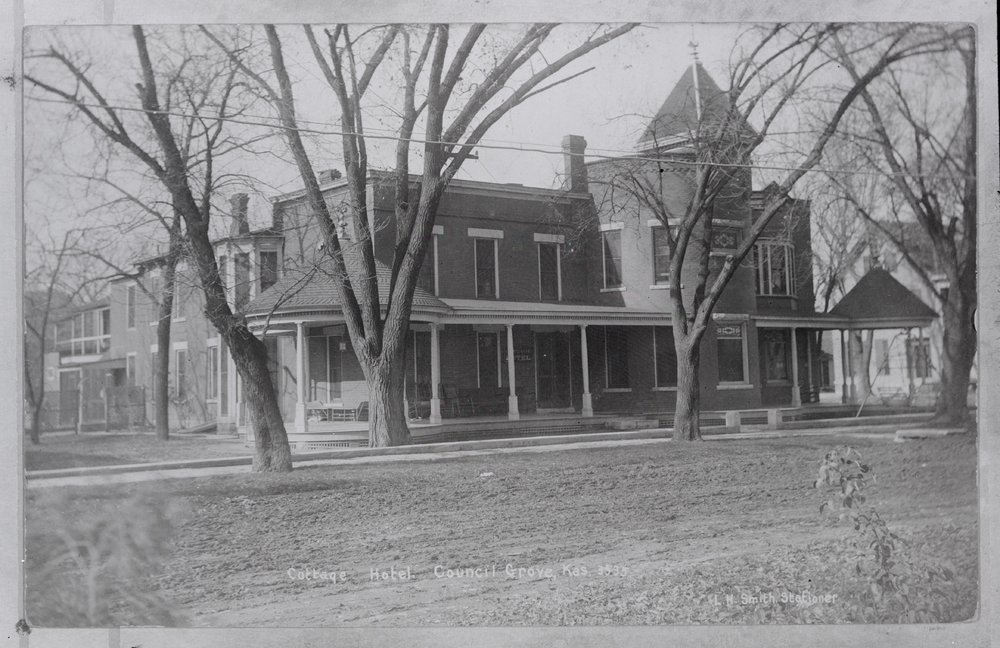 What started as a three-room cottage and blacksmith shop in 1867 has grown into a landmark hotel that has served Council Grove for more than a century. A series of additions, notably the 5,000-square-foot Queen Anne structure that was added in 1898, has allowed the property to grow into one of the landmarks of the city with a guest list that speaks to the town's history. The hotel initially served raveling salesmen and businessmen during the late-nineteenth-century along with a large family that moved west from Michigan. Council Grove was part of the Grand Prairie Highway (Santa Fe Trail) and on Highway 56 (and close to Interstates), leading to the operation of a roadside motel in the years of auto travel prior to the construction of interstate highways. Today, the hotel's victorian appearance has been restored and it operates as a historically-themed hotel similar to a bed-and-breakfast. 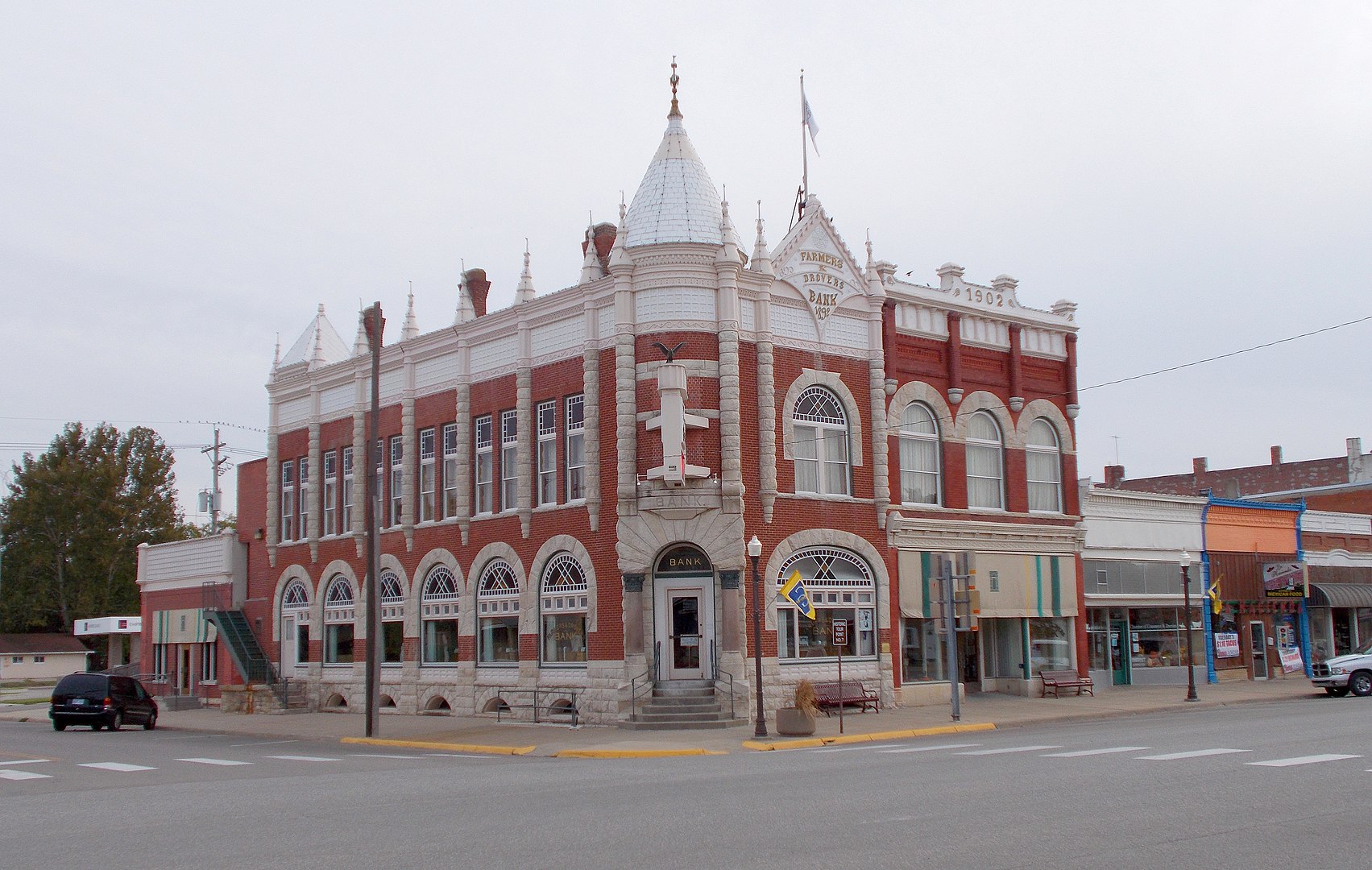 Constructed in 1892, this historic Council Grove building was home to the Farmers and Drovers Bank. The origins of the bank can be traced back to the arrival of W.H. White in Kansas. In that year, the family loaded up a wagon in Kentucky and headed to Kansas territory. White opened the Farmers and Drovers Bank in 1882 and later acquired this parcel and began construction of this building. 1893, the bank moved into the building where it continues to operate led by White's descendants. The White family has played a significant role in Manhattan since arriving. W.H. White's father proved instrumental in the town's original layout. White helped his father survey the town before his father passed away when White was only seventeen years old. As a result, White turned to cattle driving. When White collected a substantial payment in Colorado for his cattle delivery, he had to come home carrying thousands of dollars without much security; the experience showed him the value of banks. 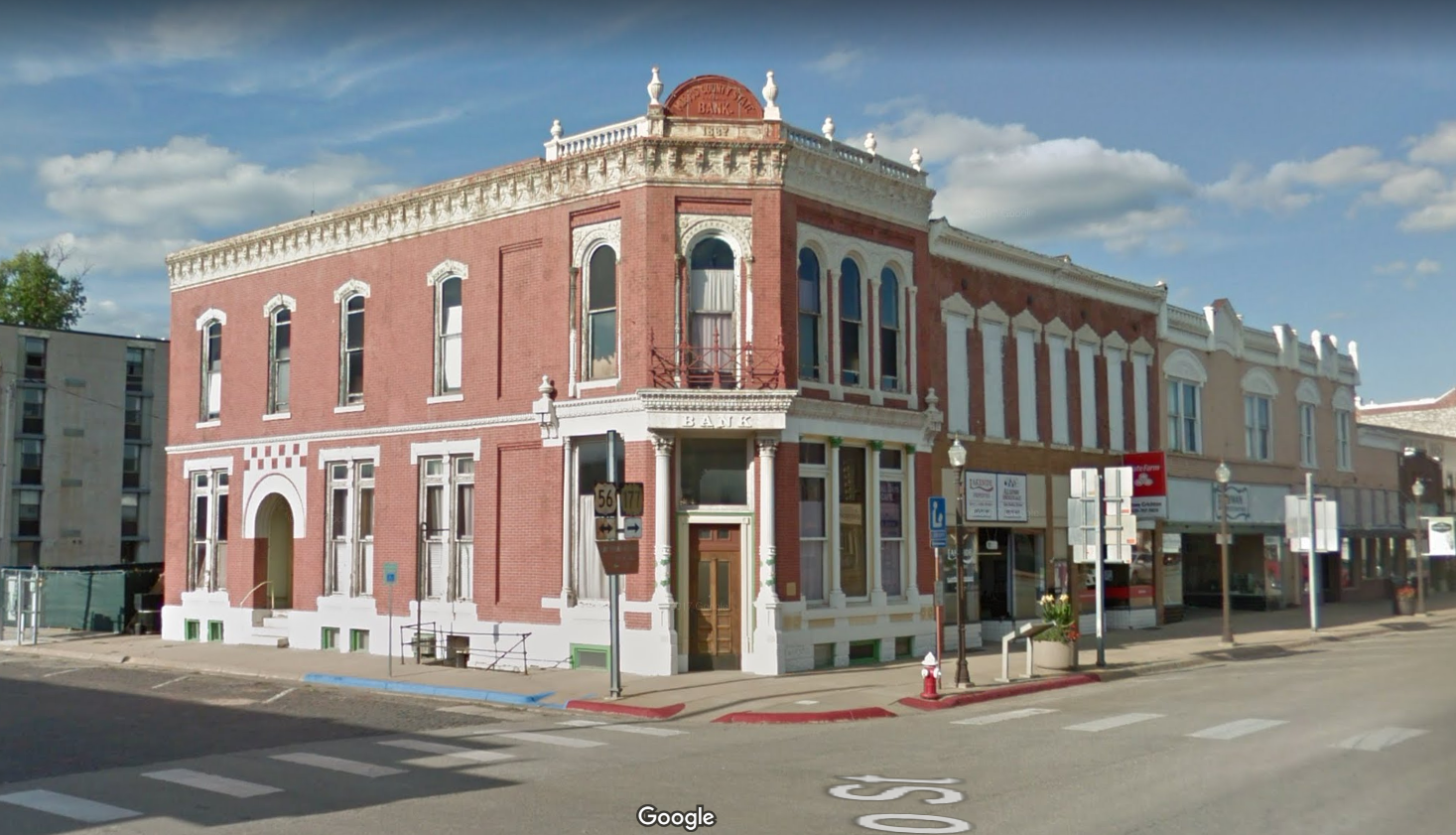 This building was completed in 1887 and was originally home to Morris County State Bank, which was established in 1878. After a fire in 1886 destroyed its previous home, the bank commissioned architect J. H. Leedy and builder Louis Peterson of Council Grove to construct this building. The bank later changed its name to Council Grove National Bank. Together with Farmers &amp; Drovers bank, located just across the street, these two banks represent the immense growth for Kansas and Council Grove leading up to the turn of the century. 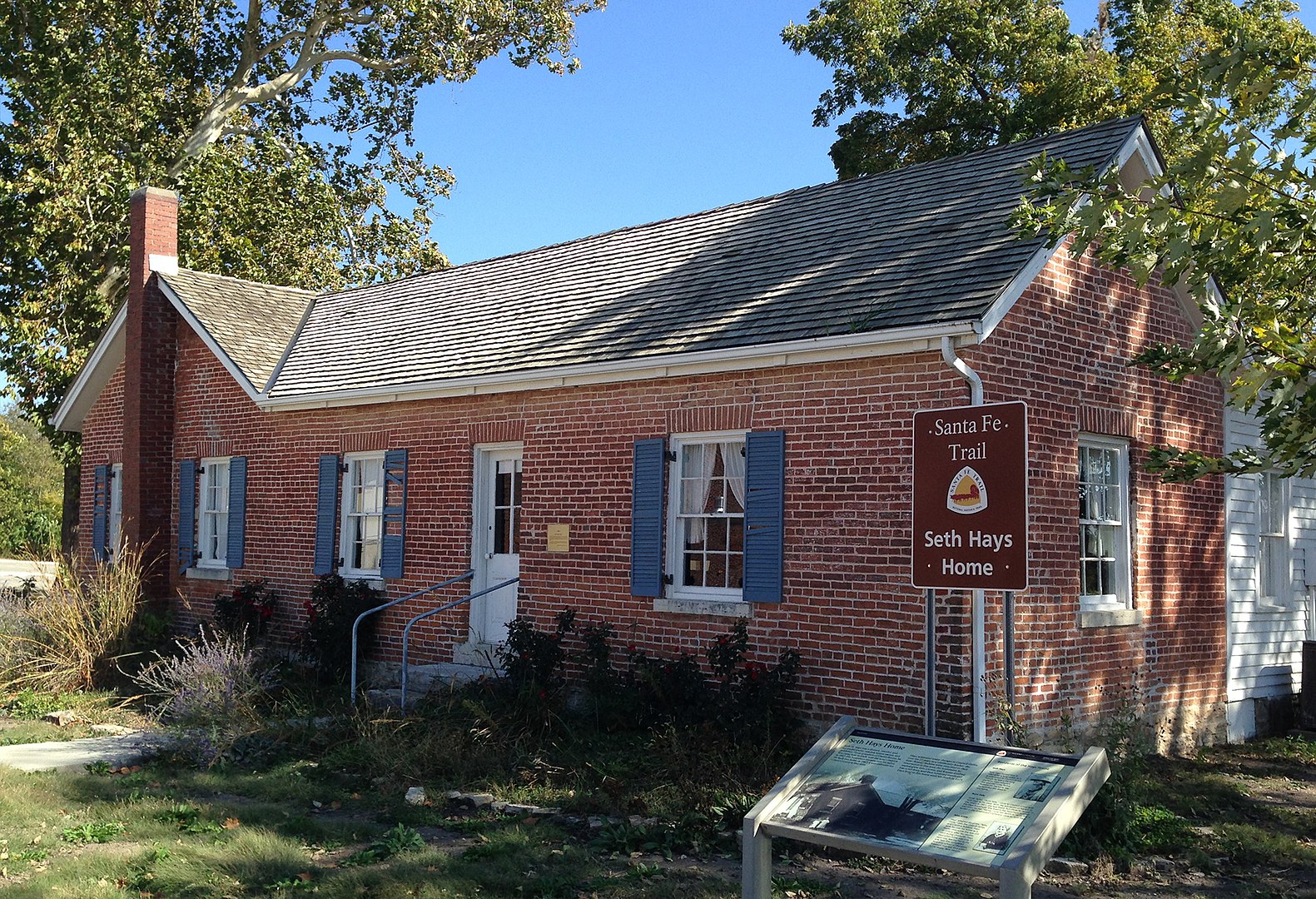 Seth Hays founded what became Council Grove when he arrived in 1847 as the area's first settler of European origin. Hays opened a trading store that conducted business with the local Kaw Nation (Kaw Reservation) as well as travelers on the Santa Fe Trail. Hays and G.M. Simcock, another person instrumental in founding Council Grove, entered into a mercantile business that provided financial success to both of them. Hays built his home in either 1866 or 1867 and, although he was unmarried, lived with his adopted daughter, Kittie, and Sarah "Aunt Sally" Taylor. Sarah, an enslaved African American, came to Council Grove with Seth. This historic house now operates as a museum operated by the Morris County Historical Society. 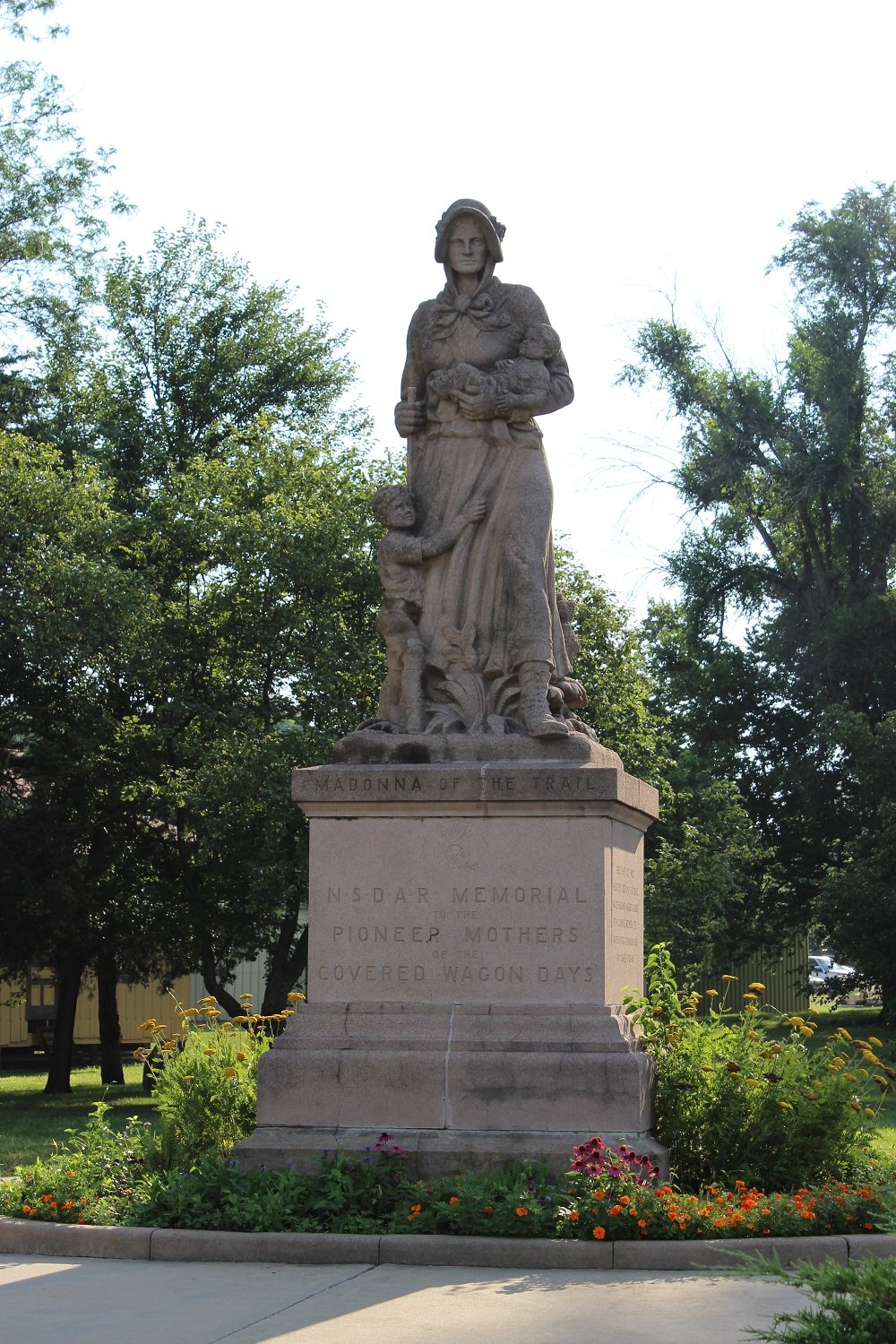 This tour begins at the historic Kaw Mission before moving south and traversing east along the city's main street with stops at historic churches, the Carnegie Library, Simcock House, two historic downtown bank buildings, and landmarks related to the city's pioneer past.