The Presbyterian Church of Falling Spring

As Chambersburg, Pennsylvania’s oldest church, The Presbyterian Church of Falling Spring represents a living conduit to the past stretching back to the town’s founding era. Named after the nearby Falling Spring (which at one time featured a nearly 25-foot waterfall), the congregation that built the church had been meeting in the area – known itself at the time as Falling Spring – since shortly after the settlement’s founder, Colonel Benjamin Chambers, arrived in 1730. Chambers, who was himself Presbyterian, hosted religious services at Fort Chambers (the site of his home and gristmill at the confluence of Falling Spring and Conococheague Creek) for several years before building a log schoolhouse on the plot adjacent to his own in 1739 for the use of his congregation. This building lasted until 1767, when the congregation replaced it with a considerably larger wooden structure. The following year, Chambers deed the land upon which the church stood to his congregation in exchange for the payment of a single rose to him, his wife, and their descendants every year in perpetuity (an agreement that is upheld to this day). Chambers also deeded land to the church for use as a graveyard, which over the course of the congregation’s history has come to serve as not only his final resting place, but the final resting place of a number of prominent politicians and four Delaware Indians from the colonial era. Over this same period, the congregation replaced their wooden church with one built from local limestone (completed in 1803), opened a Sabbath school in 1816, added two towers to the building in 1856, and established a school for refugee former slaves living in the town as a result of the American Civil War. The church is still in operation today and is open for regular religious services and extracurricular activities, and upon advanced request.

The Presbyterian Church of Falling Spring in a pre-1923 postcard. Courtesy of Herald-Mail Media. 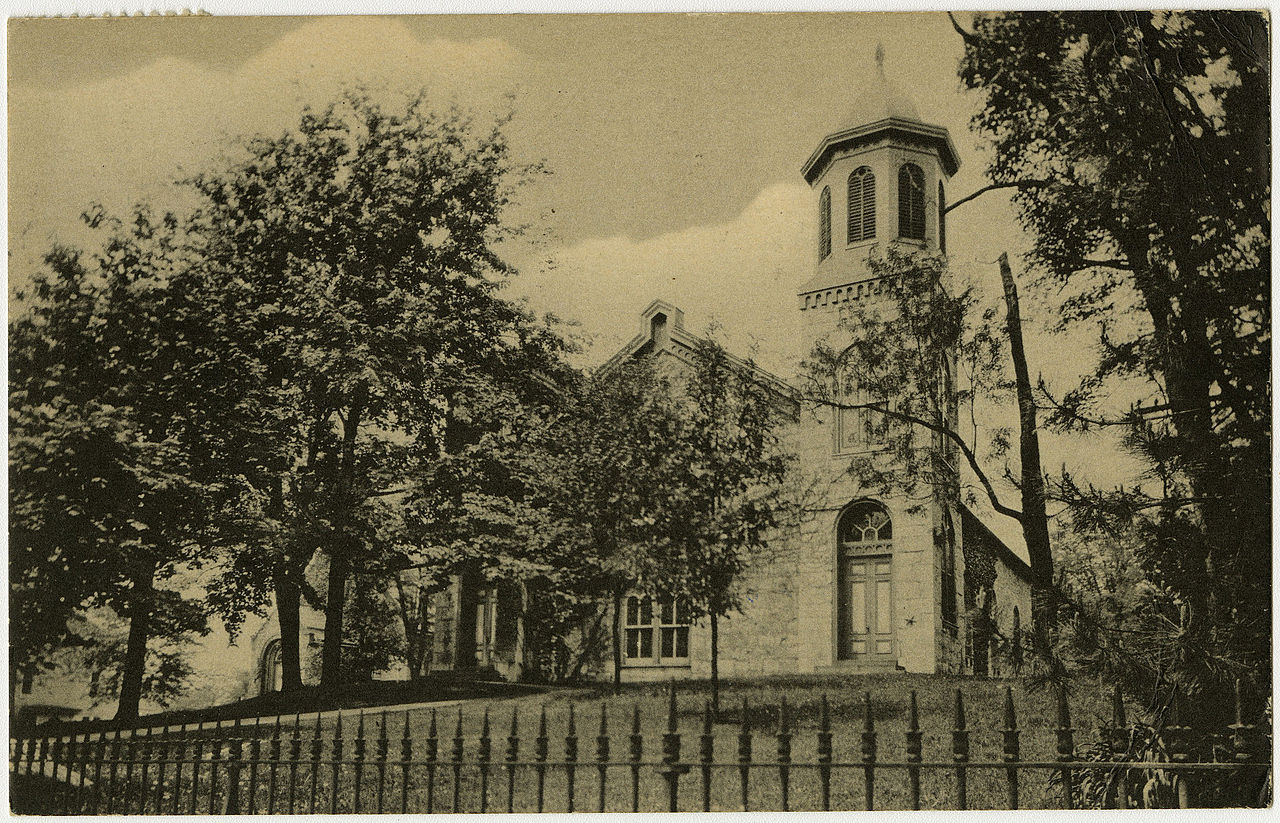 "Rose Rent" ceremony at The Presbyterian Church of Falling Spring in 2018. 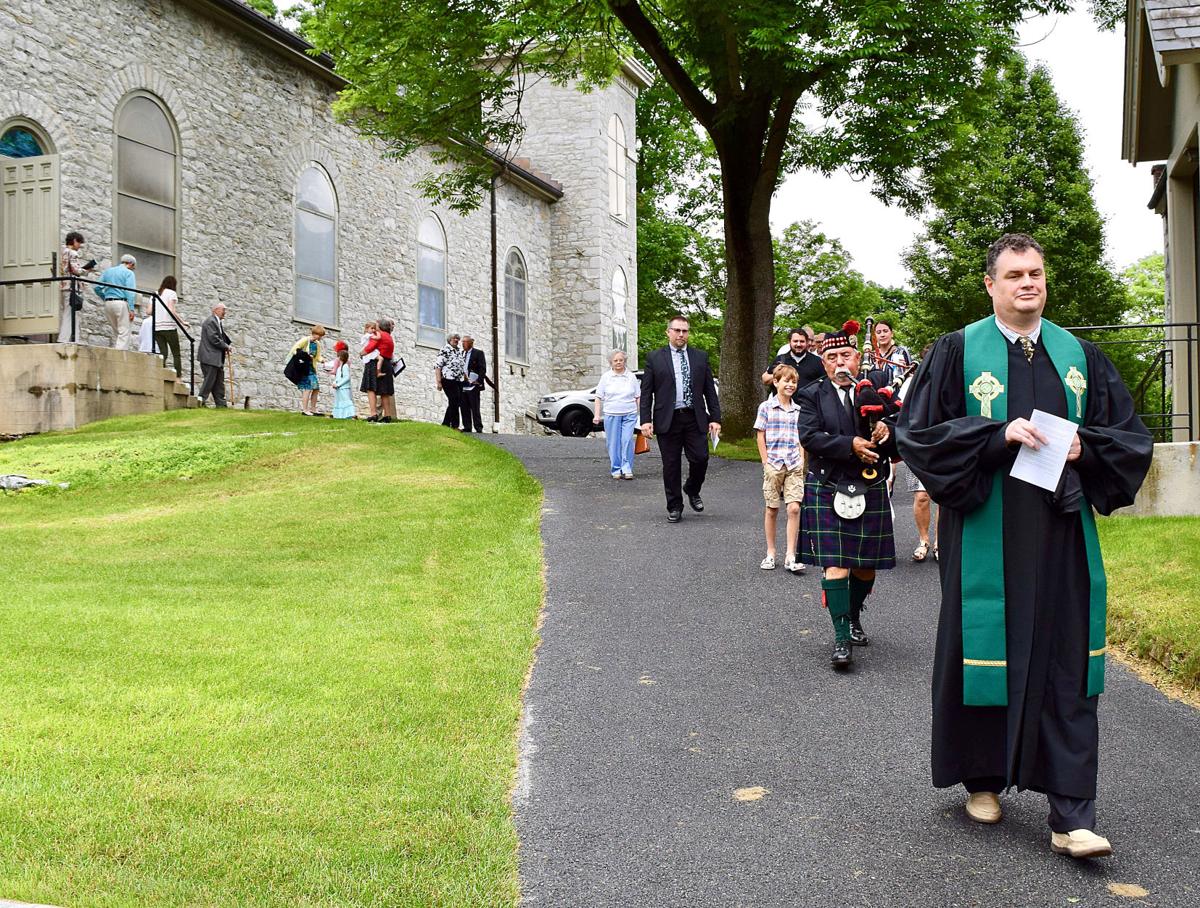 The Presbyterian congregation of Falling Spring (the original name for Benjamin Chambers’ settlement) formed shortly after the arrival of colonists to the area after 1730. Many of these early colonists were, like Chambers himself, Scotch-Irish Presbyterians, so the town’s founder offered Fort Chambers, his home and one of the few stone structures in the area at the time, as the original meeting place for Presbyterian worship. After almost a decade, however, church attendance had outgrown that building, and Chambers chose to set aside land next to his own for the construction of a new one (built from logs and completed in 1739). Within the next twenty years, the size of the congregation would stretch that building’s capacity as well, so the congregation made the decision to replace it with a larger structure in 1767. The following year, Benjamin Chambers deeded the land for that building (in exchange for a single rose paid to his family every year in perpetuity) and its graveyard to the congregation, which remained in the second version of the church for over three decades.

The limestone edifice that they replaced the second church with has remained in continuous use by the congregation since its completion in 1803, although several changes have been made (most notably the addition of two towers during renovations to the church in 1856). At various times over the course of that period, the church has served a number of functions in addition to its religious ones. Most notably, it operated a Sabbath school for much of the nineteenth century, a school for formerly enslaved refugees living in the town during the American Civil War. It also continues to operate a cemetery that includes the burial sites for Benjamin Chambers himself, a number of prominent political figures, and four Delaware Indians from the colonial era.

The Presbyterian congregation at Falling Spring has on a number of occasions grown to an extent that its size outpaced the capacity of its current house of worship. The first such building completed after the congregation moved from Fort Chambers to its current location quickly proved unable to meet the needs of its occupants, who often resorted to holding services outside so that they could accommodate the community’s growing Scotch-Irish population. This first structure was of log with two narrow window slits running the length of the church for lighting, a building that doubled as a schoolhouse outside of the regular hours of worship. The wooden building that took its place in 1767 was considerably larger and constructed of finer materials, but like its predecessor soon began to reach its capacity. So, the congregation ordered the construction of the current church (completed in 1803), built from local limestone and with a prominent front porch. Renovations to the building a few years prior to the American Civil War removed the porch and added two towers to the front in its place.

When the congregation received the deed for its land from Benjamin Chambers in 1768, it became one of the town’s three “rose rent” churches (religious institutions in the area who owe the Chambers family a single rose as annual payment for their lease). The low cost of the lease to the church stemmed largely from Chambers’ eagerness to encourage European settlement in the area, which he believed would be more likely if religious services were more readily available. The unique nature of the rent itself, however, may be a result of Chambers’ own unique personality. In fact, according to Chambers family legend, the “rose rent” contract was not the only unusual agreement their patriarch made affecting the church. Oral tradition within the family maintains that the graves of the four Delaware Indians in the church’s graveyard wound up there because of an agreement Chambers made with the Delaware leader Shingas at some point during the Seven Years’ War.

By this agreement, the story goes, Shingas allowed Chambers use of the land as a graveyard as long as he and his descendants were able to utilize it as a burial place along with Chambers and his family. The result, presumably, was the burial of four Delaware Indians alongside the early graves of the Chambers family. Operating on the assumption of this account’s truth, members of the Chambers family carefully preserved and protected the Delaware graves at least into the mid-twentieth century. The records of the Kittochtinny Historical Society in the late nineteenth century, on the other hand, assert that the local Delawares had been using the land as a burial place for years prior to Chambers’ arrival. According to these records, the members of an unnamed indigenous group living on a reserve east of the Rocky Mountains visited the site on an annual basis until 1834, when they discovered upon their arrival that someone had disturbed the burial place in order to plant crops. They then, the story goes, processed down Main Street weeping, left the town, and never returned.

A number of other prominent local figures also locate their final resting places in the church’s cemetery, including Union General Joseph Fulton Boyd and five of the area’s congressmen, an indication of the congregation’s centrality to the surrounding community. Indeed, the church was particularly integral to local education. In 1816 members of the congregation established an desegregated, nondenominational Sabbath school, which served as the primary educational institution for many of the area’s children. The church expanded operations to include a school for formers slaves from the rebellious southern states, who sought refuge in Chambersburg during the American Civil War and whose interest in receiving educations outpaced the school’s capacity as a result. These facets of the site’s past, in combination with its status as a “rose rent” church, give it a unique place in local history. Over the course of the congregation’s existence since the 1730s, it has stood witness to events both large and small, from the endemic warfare of the colonial period, through the refugee crisis of the Civil War, and into the present day. Visitors to the congregation’s church can thus look forward to learning about a variety of past events on both the local and national stages and even take part in local traditions that unlike anything else found in the country.

Anyone interested in being one of those visitors can do so during one of the church’s regular worship hours or extracurricular events, as well as its annual “Rose Rent” ceremony, which takes place every June. As one of Chambersburg’s “rose rent” churches (and as its oldest church), The Presbyterian Church of Falling Spring has had the opportunity to play a unique role in local history and has stood at the epicenter of the area’s transformation from a colonial borderland into its current form. As such, it represents a singular connection between past and present for the town that connects its present inhabitants to the Native and European communities that called it home over two-and-a-half centuries ago.

Bates, S. P. History of Franklin County, Pennsylvania. Chicago, IL: Warner, Beers &, 1887.
First Year of the Kittochtinny Historical Society. Nabu Press, 2010.
Fitch, Jennifer. "'Rose Rent' Paid in Chambersburg." The Herald-Mail, June 3, 2018. Accessed May 5, 2019. https://www.heraldmailmedia.com/news/tri_state/pennsylvania/rose-rent-paid-in-chambersburg/article_06d7ff52-6774-11e8-9f65-5747895b58c3.html.
NEVIN, ALFRED. Churches of the Valley: Or, an Historical Sketch of the Old Presbyterian Congregations of ... Cumberland and Franklin Counties, in Pennsylvania. Philadelphia: Joseph M. Wilson, 1852.
Nevin, Alfred. Encyclopaedia of the Presbyterian Church in the United States of America including the Northern and Southern Assemblies. Philadelphia: Presbyterian Pub., 1888.
Schenck, Harris R. Proceedings at the Celebration of the One Hundred and Sixtieth Anniversary of the Falling Spring Presbyterian Church, and the One Hundredth Anniversary of Its Existence as a Separate Charge, Nov. 10-14, 1894. Chambersburg, PA: Repository Press, 1894.
Wallace, Paul A.W. Pennsylvania History 20, no. 3 (1953): 284-86.