Charlotte Hawkins Brown (1883-1961) was the founder of the Palmer Memorial Institute, a prestigious boarding school for Black students in North Carolina. Though Brown spent most of her adult life outside of Cambridge, she maintained connections to Cambridge and Boston throughout her life, many of which she began to develop in her high school years at Cambridge English High School, which stood at this site. Brown’s alma mater, often referred to as “English,” was one of three Cambridge public high schools. English, along with The Cambridge Latin School and the Rindge Manual Training School shared this tract of land with Cambridge’s Public Library, which still stands today. By 1977, the three schools had merged to form the Cambridge Rindge and Latin School, which sits across the street from the Cambridge Public Library. A love of language, visual arts, and other subjects informed Brown’s work as a holistic educator who empowered students to be full people and make change in the world.

Dr. Brown with a bust of Alice Freeman Palmer 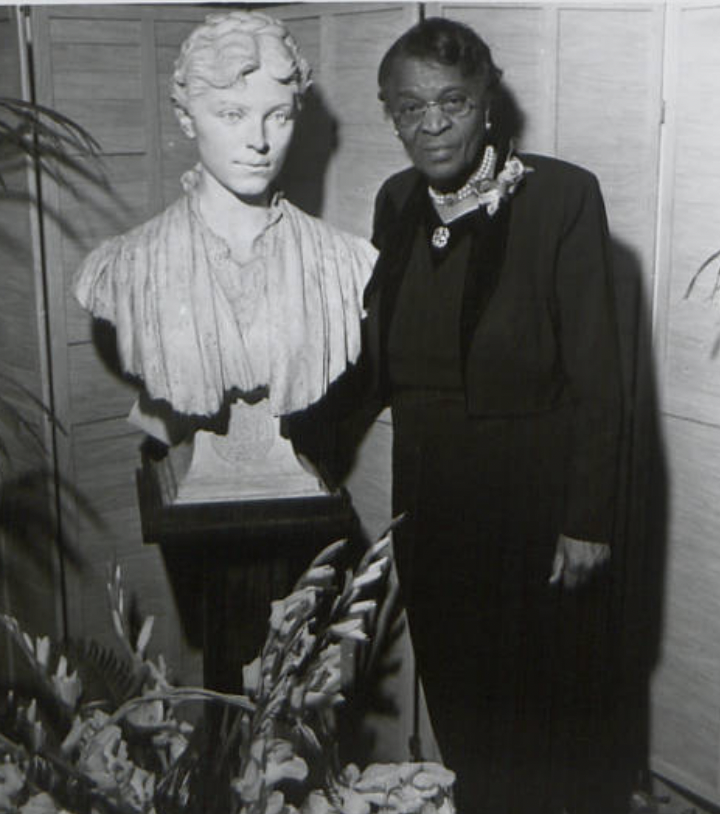 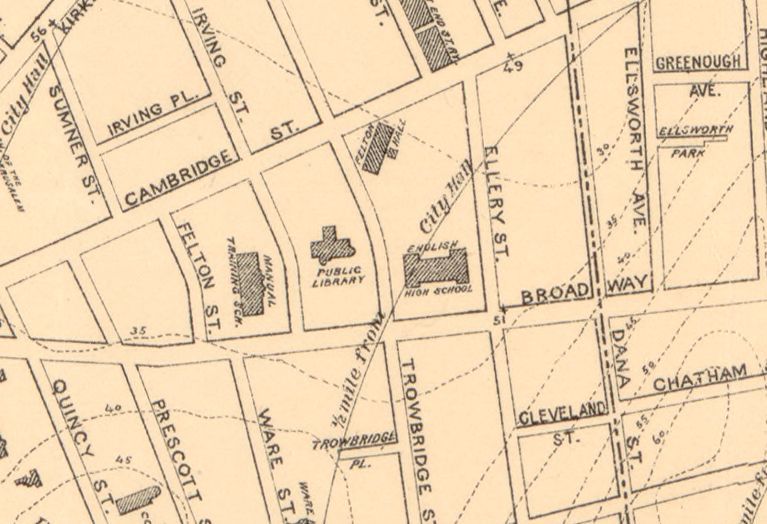 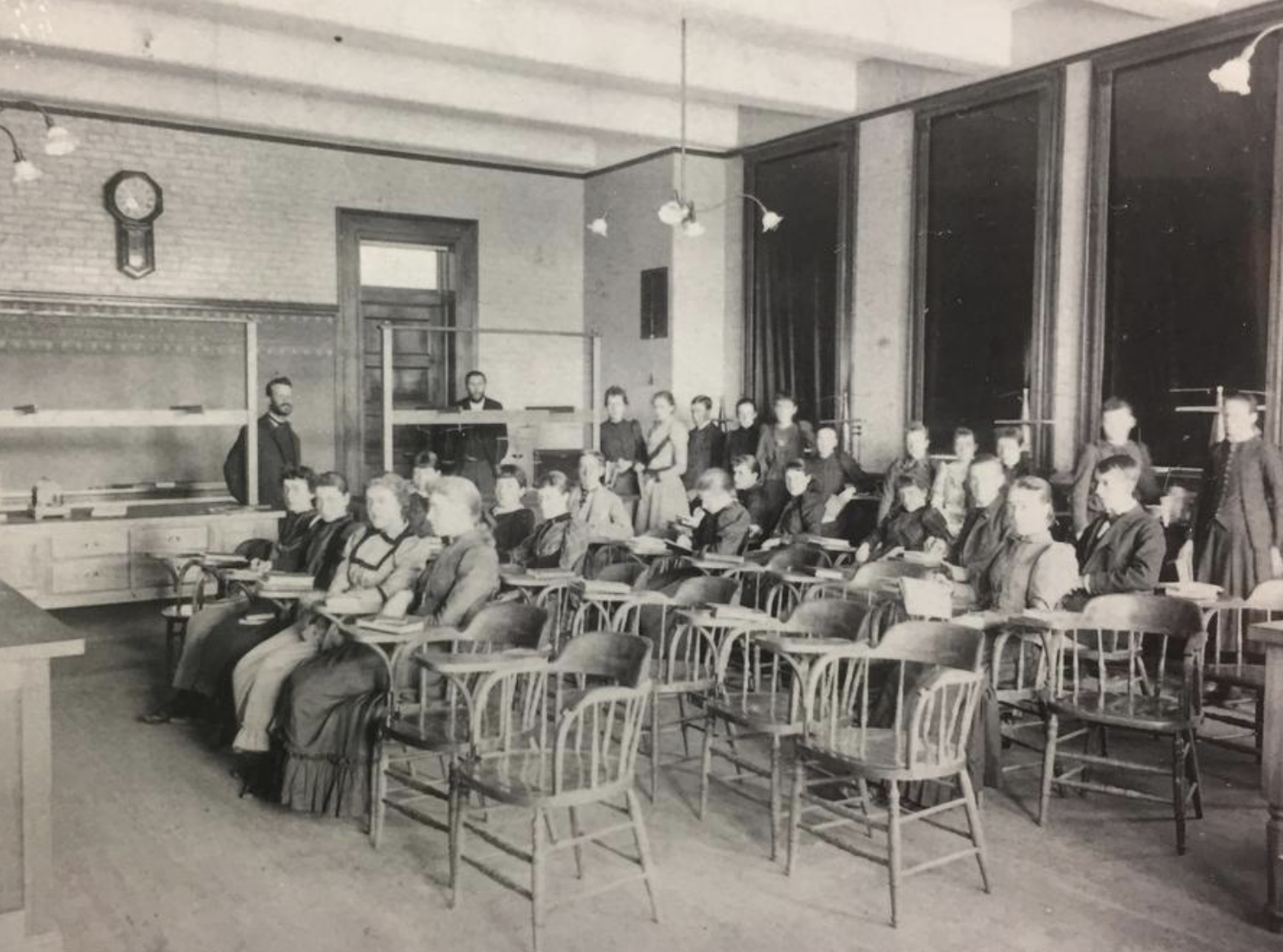 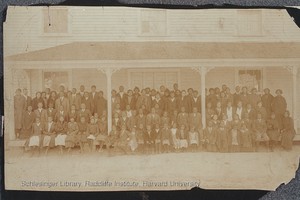 Charlotte Hawkins Brown was born June 11, 1883 in Henderson, North Carolina. Her mother moved her family to Cambridge in 1888 to escape discrimination in the South. Brown attended the Allston Grammar School, where she was chosen as graduation speaker, before attending Cambridge English High School. Brown showed an early aptitude for educational leadership. At twelve, she started a Sunday School department for kindergarten students at the predominantly Black Union Baptist Church in Cambridge, MA. Alberta V. Scott, the first Black graduate of Radcliffe College and another woman featured on this walking tour, was also a member of the Union Baptist Church.

During Brown’s senior year, one of her teachers helped her find a job babysitting, where, one day, she met Alice Palmer Walker, the first president of Wellesley College. Walker wrote to the principal of English, intrigued by Brown, who had in one hand a stroller and in another a copy of the book Virgil. Brown herself then reached out to Walker, who helped pay her tuition at State Normal School at Salem, now Salem State University. In 1901, prior to her graduation, Brown went to Sedalia, North Carolina to teach Black students with the American Missionary Association. The AMA closed the school in 1902, prompting Brown to establish her own school which she named the Palmer Memorial Institute, in honor of Palmer who had died later that year.

During her time as principal, Brown often returned to Massachusetts to speak at educational institutions and to raise funds for her school, tapping into Palmer’s and her own social networks. She spoke at educational institutions (including Smith, Mount Holyoke, Radcliffe, and Wellesley), conventions, and cultural sites about Black women’s role in America, the necessity of education, her own relationship with America, and more. In a 1909 speech at Union Baptist Church, Brown praised Black Cambridge educator Maria Baldwin’s work at the Agassiz school. Brown also helped organize the Sedalia Club, a fundraising and support group run by Cambridge and Brookline women.

The Palmer Memorial Institute’s philosophy was "Educate the individual to live in the greater world."2 Students would go on to become government officials, actors, lawyers, teachers, writers, and more. Brown further impacted the world through her writing and activism. She was involved in the National Council of Negro Women, National Association of Colored Women, and more, mobilizing other women through political and social clubs.

5. Hawkins Brown, Charlotte. "Some Incidents in the Life and Career of Charlotte Hawkins Brown Growing out of Racial Situations, at the Request of Dr. Ralph Bunche." Series I. Schlesinger Library, Harvard University. Web. https://hollisarchives.lib.harvard.edu/repositories/8/archival_objects/1425691

7. Jones, Maxine D. “Charlotte Hawkins Brown and Palmer Memorial Institute: What One Young African American Woman Could Do by Charles W. Wadelington and Richard F. Knapp.” The Journal of Southern History, 67, no. 3 (Aug., 2001): 684-685.