This historical marker was dedicated in 2014 and commemorates the February 23, 1913 meeting that occurred here as leaders and supporters of the National American Woman Suffrage Association during the march between New York City and Washington, DC. On February 12, a group of women called "The Army of the Hudson" began marching from New York City to the Capital. They were met by supporters at Overlea Town Hall on February 23, after a journey of 230 miles. While only sixteen women completed the entire march, thousands of women participated in a segment of the 17 day, 230-mile trek. In addition, a total of 8,000 women travelled to Washington for the March 3, 1913 Women's Suffrage Parade. Between the seventeen day march that included numerous participants and observers and the parade in Washington DC, the march and parade brought national attention to voting rights for women. 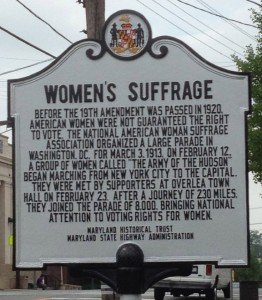 Marker being presented in a town commencement 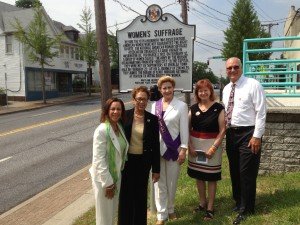 Rosalie Jones was a suffragist from Long Island who was famous for doing the unusual and unexpected. Rosalie used marches, parades, and wagons to lure crowds and draw attention to the suffrage movement. She also led a march to Albany to deliver a petition to the governor and then led supporters to Washington, DC to participate in a protest parade before Woodrow Wilson’s inauguration.

As part of that march from Washington to New York, suffragists had a rally at this location in Overlea, Maryland. The meeting outside the town hall attracted few supporters, but recent commemorations of the event have drawn much larger crowds including the 2014 dedication of this historical marker outside of the Maryland Natural History Society.

While victory required many more marches and events to convince state and national lawmakers that it was in their political self-interest to support equal voting rights. The suffragists won their campaign on August 26, 1920, when the U.S. Secretary of State proclaimed the ratification in the 19th Amendment.

The suffragist movement had many beginnings, including the work of Abigail Adams, wife of John Adams, who attended the Continental Congress in Philadephia and challenged the exclusion of women. She asked her husband to "consider the ladies" while working on the Declaration of Independence, a sentiment shared by many other women who used their influence is both direct and indirect ways. The start of the women's suffrage movement is often credited with the work of Lucrecia Mott and Elizabeth Stanton in organizing the Seneca Falls Convention in 1848. The convention's purpose was to call attention to the unfair treatment of women. During the convention, Elizabeth Stanton drafted and wrote the Declaration of Sentiments on the Declaration of Independence. The document would later be seen as a sort of "founding document" of the push for political equality.

At the convention, Stanton met Susan B. Anthony and the two later formed the Woman’s National Loyal League in 1863. The women worked in support of the Thirteenth Amendment and also campaigned for full citizenship for Black Americans and all women. They also created the National Woman Suffrage Association and campaigned for an amendment for universal suffrage in America. They later worked for changes in divorce laws and an end to employment and pay discrimination.