On August 18, 1920, the Tennessee House of Representatives passed – by one vote – a motion to ratify the 19th Amendment, a federal measure that extended suffrage to all American citizens regardless of gender. With that vote and the support of the governor, Tennessee became the 36th state to ratify the 19th Amendment. With support for the Amendment being fairly limited in other Southern states, Tennessee's action was both symbolic and historically significant--it meant that the 19th Amendment had been ratified by three-fourths of the states--the requirement set forth in Article V of the Constitution prior to the adoption of any Constitutional Amendment. In response, some of the opponents of women’s suffrage, known then as “Antis,” held a protest meeting that saw the extension of suffrage by federal action through the lens of state's rights. On the day following the vote, August 19th, the “Antis” held an historic mass rally at the Ryman Auditorium – later famous as the home of the Grand Ole Opry – to protest the result and try somehow to overturn it. Speakers appealed to notions of patriarchy and "traditional" gender roles, as well as playing to anger against the perception that women's suffrage would erode the power of Southern whites. One pro-suffrage newspaper gleefully reported that the meeting failed to attract an audience, while the leading paper of the Antis reported a "monster" crowd in attendance. Well-attended or not, this rear-guard action failed, as Governor A.H. Roberts supported the decision of a majority of state legislators and added his signature to the bill.

An August 19, 1920 poster calling for a rally at the historic Ryman Auditorium to protest the vote the previous day by the Tennessee House of Representatives ratifying the 19th Amendment 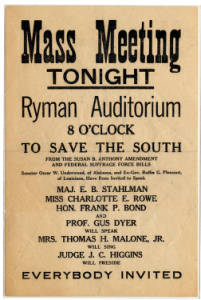 An anti-suffrage poster, appealing to fears of some male voters that suffrage for women would replace patriarchal authority with matriarchal tyranny. 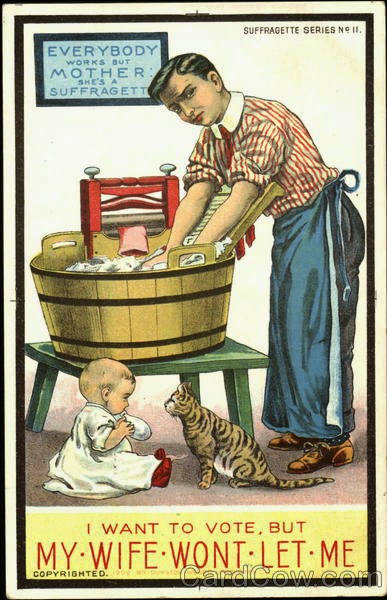 An editorial cartoon, in which the suffragist movement, represented by a woman, grabs hold of a plant, representing Tennessee, as the final hope for achieving ratification of the 19th Amendment 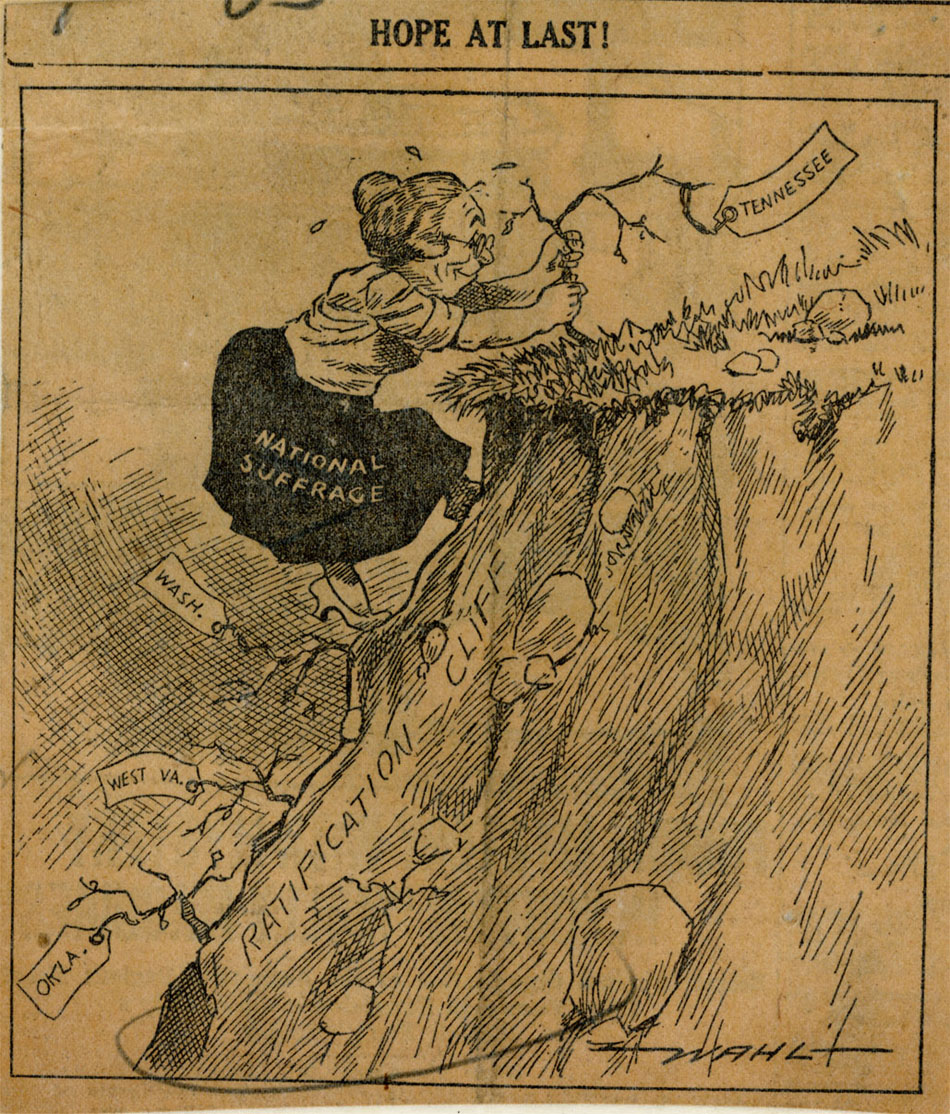 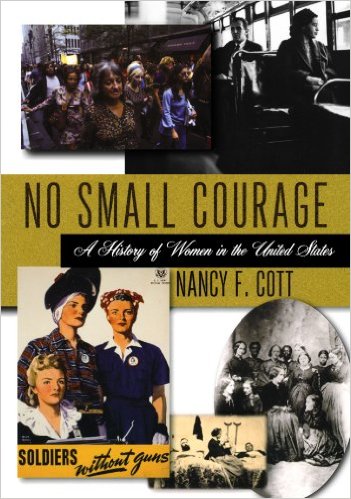 "Are you a supporter of the red rose faction or the yellow rose faction?" While one might assume such a question referred to a political dispute in England, it was the leading question of lawmakers in Tennessee leading up to the ratification of the 19th Amendment. Harkening back to Tennessee's "War of the Roses"-a 19th-century political contest between rival sides who wore different colored roses- legislators once again indicated their position by the color of the rose on their suit jacket. While some men and women supported the constitutional amendment to grant women the legal right to vote, half of the state legislature opposed the ratification of the 19th Amendment.

The 19th Amendment, which prohibits anyone from being denied the right to vote on the basis of sex, was approved by Congress on June 4, 1919, and thus went to the states for ratification. By March 1920, 35 states had ratified the amendment, meaning that it was only one state short of the 36 needed to add the amendment to the US Constitution. Among the states that had not yet voted, Tennessee was considered by the “Pros" (those in favor of suffrage), to be the most likely remaining state to ratify the amendment. This argument was strengthened by the fact that in 1919, Tennessee had approved a law that allowed women to vote in Presidential elections.

The "Pros" symbolized their support of women's suffrage by wearing a yellow rose. Meanwhile, the “Antis” showed their opposition to enfranchisement by wearing a red rose. The Antis included men and a significant but shrinking number of female supporters as state after state enacted pro-suffrage legislation. Feeling besieged by societal change, the Antis were determined to retain the vote for men only, believing that this might help them arrest other societal changes while preserving the traditional patriarchal nature of American politics and society. The situation led to a perfect war of politics. Because both sides used the Hermitage Hotel as their headquarters, this hotel became the front line of the conflict.

The motion to approve the 19th amendment eventually passed the Tennessee Senate and then went to the state House of Representatives in August. After an attempt to table the motion resulted in a tie, the motion was put forward for a vote. Two votes were taken, both resulting in ties, and a third vote began.

What happened next is the stuff of legend--and myth. Reportedly, the youngest member of the House, Harry Burn from Niota, wore the red rose and intended to vote against the amendment. But that morning, he had received a telegram which troubled him. Burn’s mother, Phoebe Ensminger Burn, known to her friends as “Miss Febb,” had written to her son, “Hurrah, and vote for suffrage! Don’t keep them in doubt... I have been watching to see how you stood, but have not noticed anything yet.” When his turn came, Burn unexpectedly cried out “Aye” – so quickly, in fact, that his colleagues did not immediately notice his defection. With that one vote, the amendment passed the House, and thus became part of the Constitutional. It is said that, following his vote, Burn was forced to flee to the attic of the state capitol to escape the wrath of the “red rose” colleagues who believed that he had betrayed them.

Many of the “Antis” refused to accept suffrage. They accused Burn of bribery and other nefarious crimes. These forces called for a rally at the Ryman Auditorium the following day, August 19th, to gain support for an attempt to legally reverse the result. The city’s conservative newspaper, The Banner, posted the headline “Go to Mass-Meeting, Ryman Auditorium, Tonight. Will Make Protest Against Ratification.” The paper also printed affidavits alleging that Burn had been promised $10,000 by suffrage supporters. On the other hand, the more progressive newspaper, The Tennessean, published a long article defending Burn and stressing the influence Miss Febb had wielded on her son’s decision. “I knew that a mother’s advice is always safest for her boy to follow,” said Burn.

The publisher of The Banner, Edward Bushrod Stahlman, a conservative German immigrant and businessman, was a speaker at the rally. A major theme of the meeting, reflected in the language of the poster, was the “Anti” movement’s attempt to “save the south,” rather than America or Tennessee specifically. House Speaker Seth Walker reportedly remarked, “Forty seven names [among the House legislators] have been signed in the blood of the South to keep this a white man’s country and a white man’s government.” It was widely feared by many of the people gathered there that women’s suffrage would lead inevitably to the full enfranchisement of African-Americans.

The following day, The Banner reported that no less than 5,000 people had attended the “monster outpouring” at the Ryman. But neither the newspaper nor the movement it supported could reverse history. On August 23, Gov. A.H. Roberts certified the legislature’s vote, and a few days later the women of America were at last enfranchised – thanks to the outspoken mother of a single Tennessee legislator.