Susan B. Anthony, one of the most important figures of the 19th century, was born in this house in 1820. Born into a Quaker family, Anthony was a staunch abolitionist, a supporter of temperance, and an advocate for women's rights. Over time, she became best known as one of the most significant leaders in the movement to pass laws that would recognize and guarantee women's right to vote. The house now serves as a small museum and is listed on the National Register of Historic Places. The house was built by Anthony's father in 1817. The museum features period items, literature, and memorabilia related to Susan's early life and legacy as a suffragist. Her Quaker upbringing is central to her life and work and is a central theme in the museum. Perhaps the most striking part of the museum is a visit to the room in which Susan was born.

The Susan B. Anthony Birthplace Museum 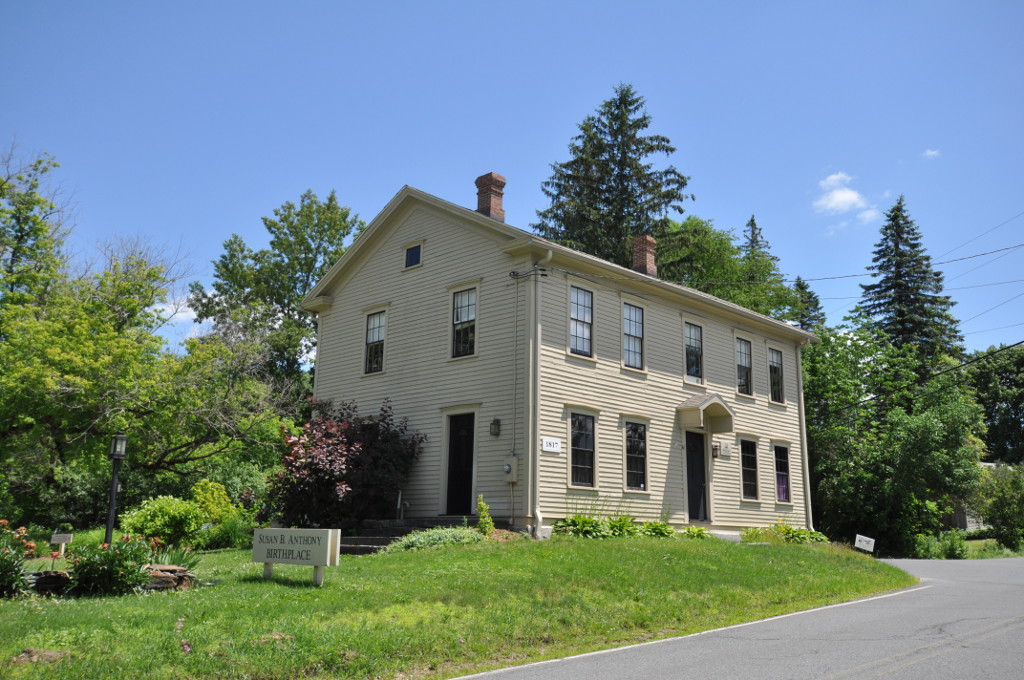 The Anthony family owned the land since before the Revolutionary War. They and other Quakers made their way to Adams from Rhode Island and southeastern Massachusetts. Her father, David, established a cotton mill and was a strong advocate of education; he also worked as a teacher. The house remained in the family until 1895. It was privately owned until 1926 when it became a museum. It was restored in 2006-2009.

Reflecting the way that historical interpretations are often employed to make contemporary and political arguments, Anthony has increasingly been cited as an anti-restillist (opposition to abortion). Documentation for this claim is difficult to support conclusively given the taboo nature of abortion in Anthony's lifetime, the lack of modern medical technology, and the fact that very few women or men openly considered or discussed the topic publicly. In her life, Anthony may have breached the topic in a handful of journal entries, once predicting that a relative would regret "tampering with herself" after reportedly ending her pregnancy. Anthony also refused advertisements for dangerous and illicit drugs that were sometimes used to abort a pregnancy. At the same time, Anthony refused to publish other advertisements for "quack' medicines and she maintained friendships with women who openly discussed abortion despite the taboo nature of the topic at that time.

In an interview Slate Magazine, Ann Gordon, editor of the six-volume "Selected Papers of Elizabeth Cady Stanton and Susan B. Anthony" dismissed claims that Anthony's stance on abortion was clearly identified in any way that might be applicable to the modern practice or debate about abortion and reproductive rights. Given Anthony's consistent position in favor of women's rights and the stark differences between the modern practice and debate about abortion and the taboo nature of the topic in Anthony's time, Gordon concluded that those who claim the suffragist as a Pro-life activist are choosing that interpretation rather than exploring the question and adjusting their thesis in the face of evidence and historic context.