This monument honors the leading advocates of women's suffrage in Tennessee. The 19th Amendment, which guarantees the right to vote to all Americans, became law when the Tennessee legislature became the 36th state to ratify the amendment on August 18, 1920. On August 26th, 2016, the Women’s Suffrage Monument was unveiled to pay tribute to all of the women who advocated on behalf of ratification. The statue will later be moved to the grounds of the state capitol and features four leaders of the movement: Anne Dallas Dudley of Nashville, J. Frankie Pierce of Nashville, Sue Shelton White of Jackson, and Abby Crawford Milton of Chattanooga. The monument also features national suffrage leader Carrie Chapman Catt.

This monument was unveiled in 2016 and will be moved to the Tennessee State Capitol following construction and renovation work on the capitol grounds. 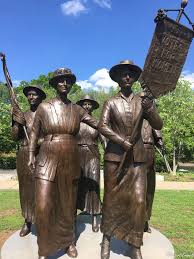 This nearby historical marker relates the dramatic final vote on ratification in the Tennessee legislature where advocates of suffrage and opponents wore different colored roses on their lapels to signify their position. 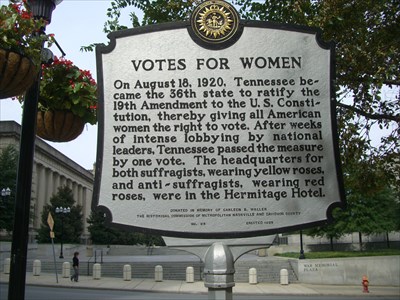 Between June 4, 1919, when Congress approved the Amendment, and August 18th, 1920, it was unclear whether enough states in certain parts of the country would ratify the Amendment for it to meet the Constitutionally-mandated requirement of being ratified by three-fourths of the states. While many of the states in the West already recognized women's right to vote and ratified the measure shortly after Congress approved the measure, legislators in the Deep South expressed strong opposition. The movement for ratification also stalled in a handful of eastern states, meaning that the fate of ratification would come down to a handful of battleground states. Eight months after Congress approved the amendment, the momentum for ratification stalled. Advocates knew that their best chance for success was to carry states in the east and the Border South states. While Virginia rejected the measure, West Virginia turned in favor of women's suffrage in dramatic fashion in February of 1920. Still, with few other states considering the measure, the fate of women's suffrage came down to whether advocates could carry Tennessee. Thanks to the persuasive arguments of women's suffrage advocates, including the mother of one reluctant lawmaker, the 19th Amendment became part of the Constitution when Tennessee ratified the 19th Amendment by a one-vote majority on August 18, 1920.

The land that constitutes Centennial Park was dedicated for use as a public park in 1903. Few who attended that dedication could predict that the park would hold a dedication ceremony to commemorate women's suffrage over a century later. The park was also the location of another civil rights milestone, as African Americans protested their exclusion from the park in the mid 20th century. The park includes a variety of monuments and markers related to this and other events related to civil rights, urban history, and military history.

Nashville sculptor Alan LeQuire designed this sculpture and had previously created the Tennessee Woman Suffrage Memorial in Knoxville. Visitors can view other sculptures by LeQuires throughout the region, including the Tennessee’s Vietnam Veteran’s Memorial, several bronze sculptures at Vanderbilt University, and last a life-size statue of Jack Daniel which stands at the Jack Daniel’s Distillery in Lynchburg.

Leaders of the movement to create this monument have plans to erect similar memorials in Memphis, Clarksville, and Chattanooga.