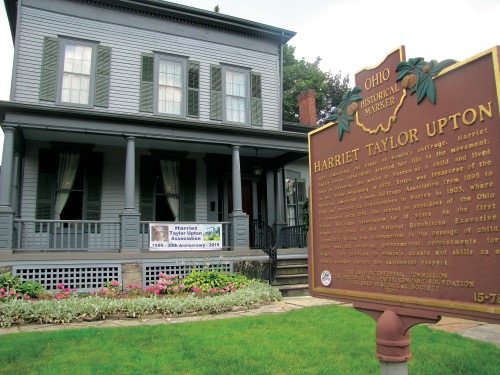 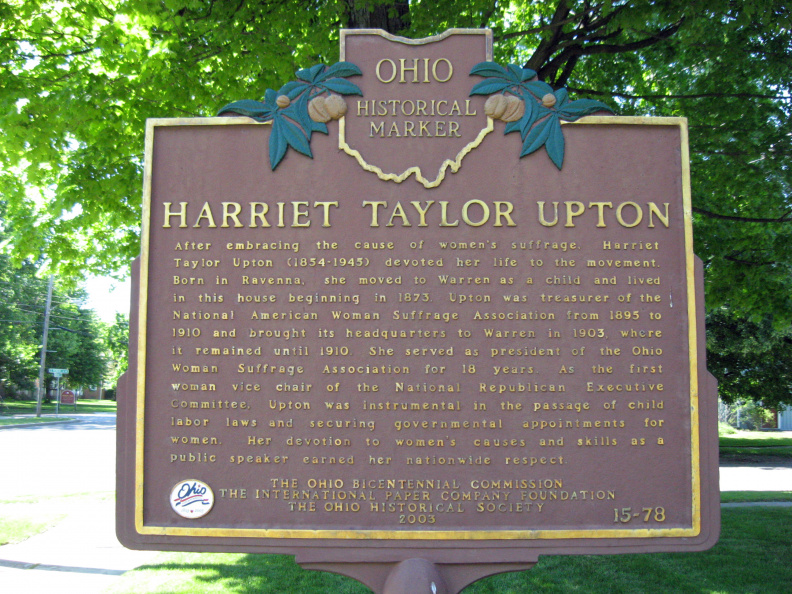 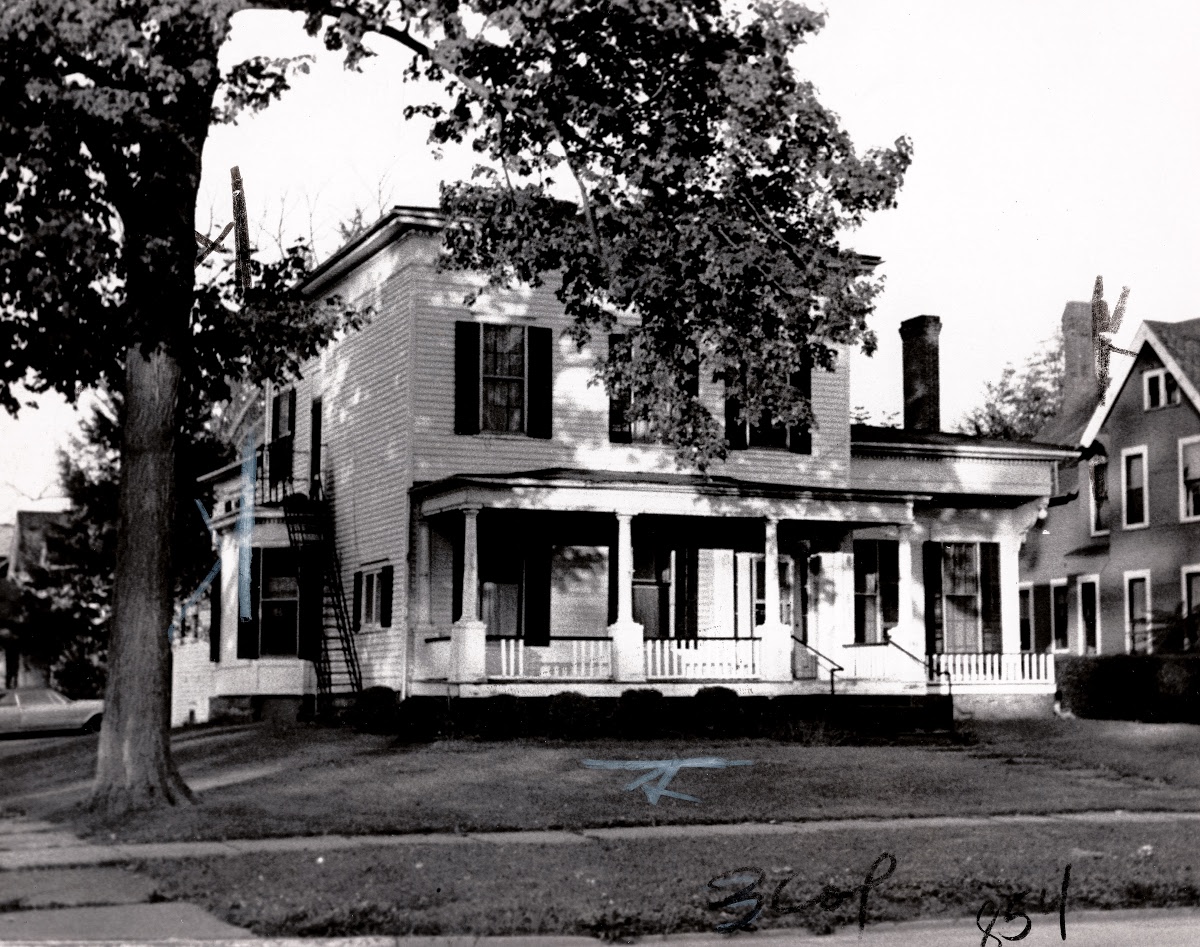 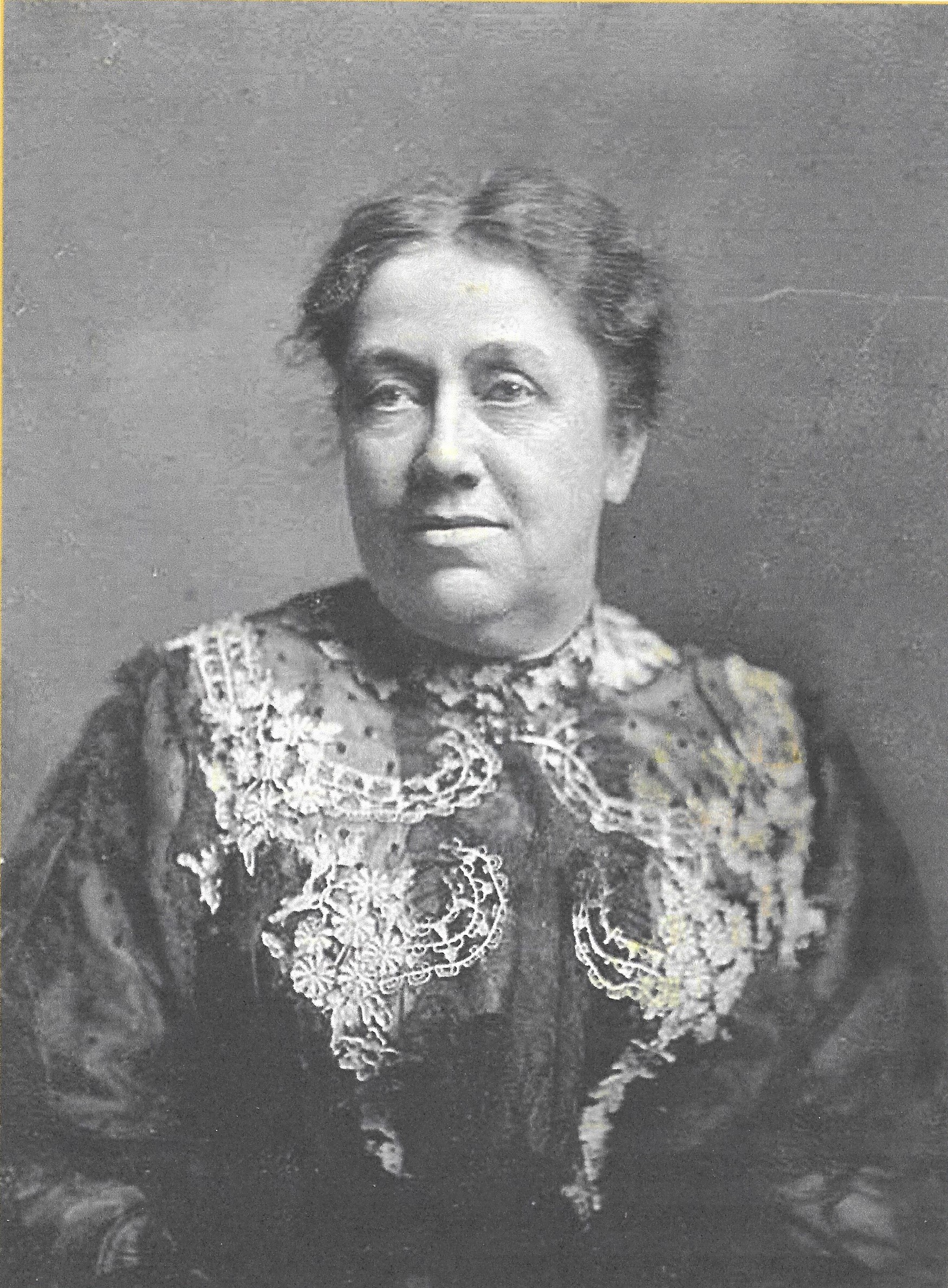 Harriet Taylor Upton, daughter of Ohio judge Ezra B. Taylor, was born December 17, 1853 in Ravenna, OH. The Taylors moved to Warren, OH in 1861, and purchased the house from the Perkins family in 1873. Upton's father was appointed to Congress in 1880, and she accompanied him to Washington, D.C. while Congress was in session. She became known in society for her literary ability and amiable character. She married Attorney George Upton in 1884.

Upton emerged as one of the leading voices of the Women’s Suffrage Movement in the early 1890s, and spent thirty years dedicating herself to the passage of the 19th Amendment. In 1891, she hosted a gathering of women seeking equal rights, known as the Ohio Women in Convention, within her home. Upton served as a key organizer and the first president of the Suffrage Association of Warren, as well as the president of the Ohio Woman Suffrage Association (OWSA) from 1899-1908 and again from 1911-1920.

Upton was also a member and later Treasurer (1890; 1894-1909) of the National American Woman Suffrage Association (NAWSA), the product of the merger between the American Woman Suffrage Association (AWSA) and National Woman Suffrage Association (NWSA) in 1890. The NAWSA headquarters temporarily relocated from Washington, D.C. to Warren, OH from 1903-1909, first to Upton's home (1903-1905) and then to the Trumbull County Courthouse (1905-1909). Upton served as the chairman of NAWSA’s Congressional Committee with colleagues Susan B. Anthony and Carrie Chapman Catt, and was instrumental in opening the diplomatic corps to women. The primary objective of the Congressional Committee was to initiate the amendment to the U.S. Constitution to provide equal suffrage to all. Several months prior to the ratification of the 19th Amendment, NAWSA transitioned into the League of Women Voters, of which Upton was a charter member.

The Harriet Taylor Upton House is the third oldest surviving home on Mahoning Avenue in Warren, OH, which is known as “Millionaires’ Row.” The Greek Revival home was built by General Simon Perkins in 1840 for his son, Henry B. Perkins, who sold the home to Ezra Taylor in 1873. The house was originally designed in Egyptian motif, but was modified to a vernacular Greek Revival style sometime prior to the Taylor occupancy. The original center portion of the house was added to on three different occasions, one occurring after Upton moved out in 1931 due to losing the house to a sheriff’s sale. In 1945 the house served as a community center, and in 1952 was converted into five apartments, which involved dividing the dining room in half to serve as a bedroom and kitchen.

In 1989, the Upton Association purchased the house and worked with preservation architects to restore the house to its appearance during Upton’s occupancy. The house achieved National Historic Landmark status in 1992 for its prominence in the Women’s Suffrage Movement, and an Ohio Historical Marker was dedicated to Harriet Taylor Upton on the property for Ohio’s bicentennial in 2003. The restoration of the house and gardens continues today through the efforts of the Upton Association, along with educational programming for all ages and house tours.

Please call to set up a tour.