McKendree Hospital was one of three turn of the twentieth century hospitals established by the West Virginia State Legislature to provide free healthcare to coal miners. The town of McKendree was selected to host the hospital due to its location on the Chesapeake and Ohio main line and because coal magnate Joseph Beury donated several acres of land. The building was completed in 1901 and immediately began admitting patients. Most patients were miners involved in serious accidents on the job, though other patients were also admitted. Demand for the hospital’s services quickly outstripped capacity, so to compensate, McKendree established a nursing program. The nursing program was a huge success and was widely regarded as one of the best in the area. The hospital remained in use and expanded throughout the 1920s and 30s, before the decline of the coal industry led the facility to be closed in 1941. It soon reopened as a elderly care center for Black West Virginians. Following integration in 1956, the building was completely abandoned. Since then, the buildings have been torn down and the site left to nature. The National Park Service manages the area, which is accessible via the unmaintained Route 25.

The New River and Chesapeake and Ohio Railroad are just visible in the bottom right corner.

The main McKendree Hospital building was also known as Hospital Number 2, as it was the second of three hospitals established by the West Virginia legislature to provide free healthcare to coal miners. Photo from 1927. 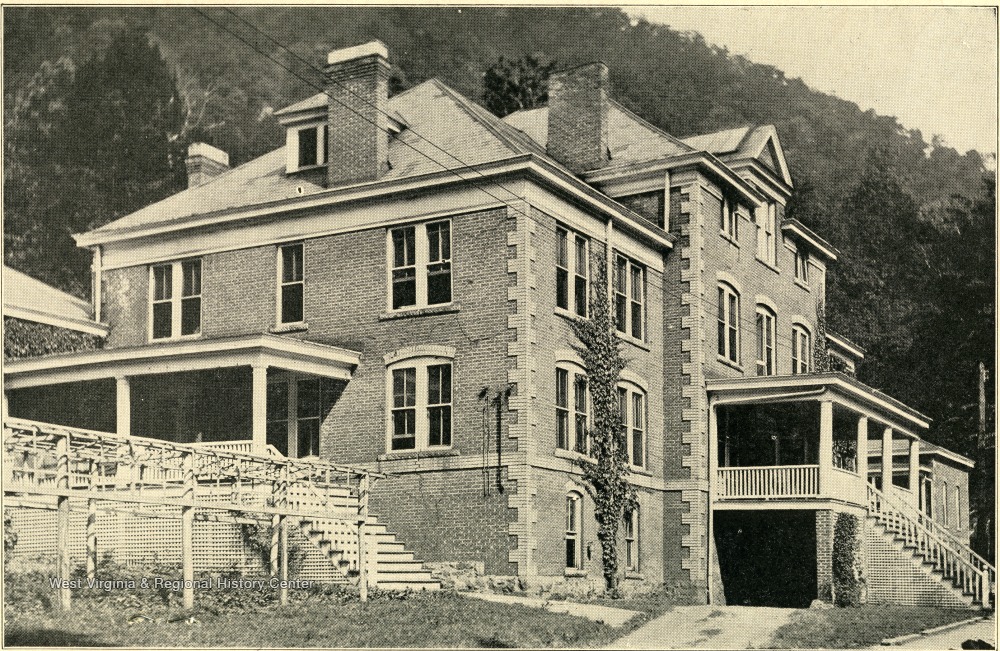 Patients in one of the wards. 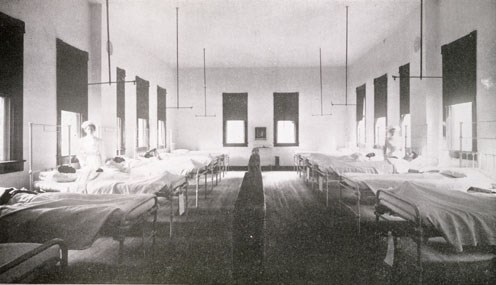 An operating room in the facility. 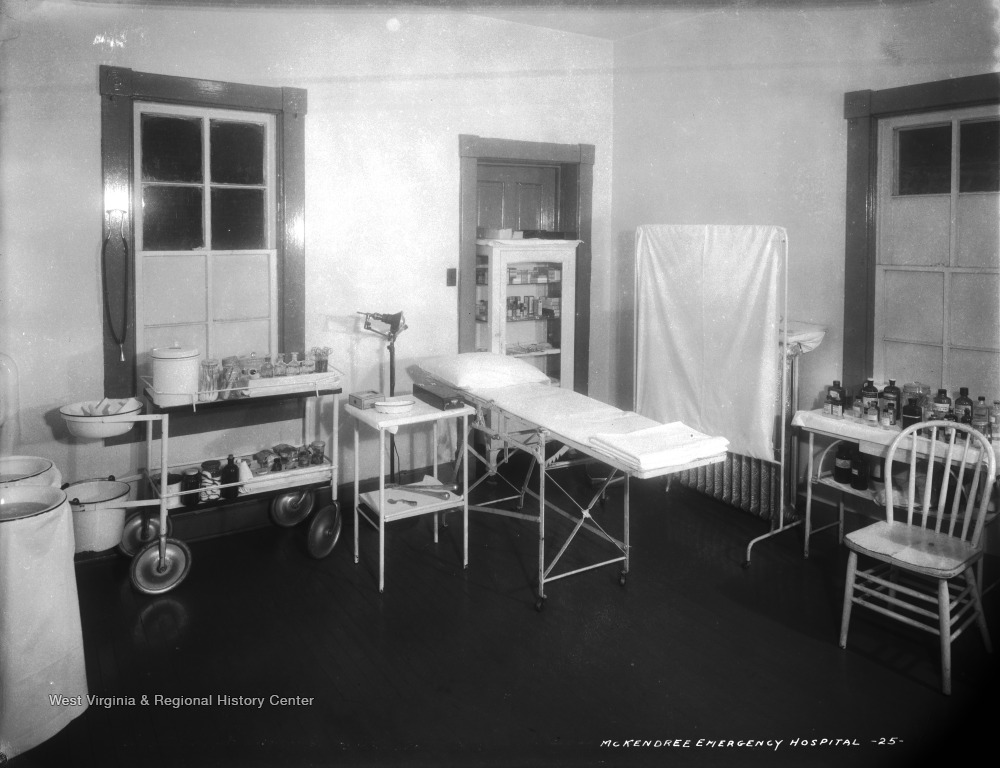 Housing for the student nurses was constructed in 1917. This photo was taken in 1920, just three years after completion of the building. 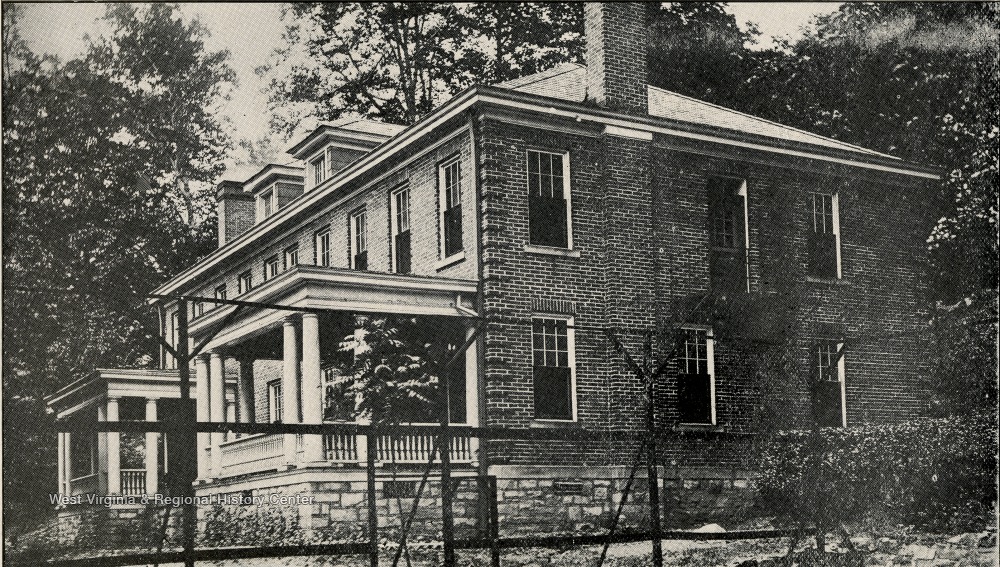 Student nurses and hospital staff standing in front of the student boarding house constructed in 1917. 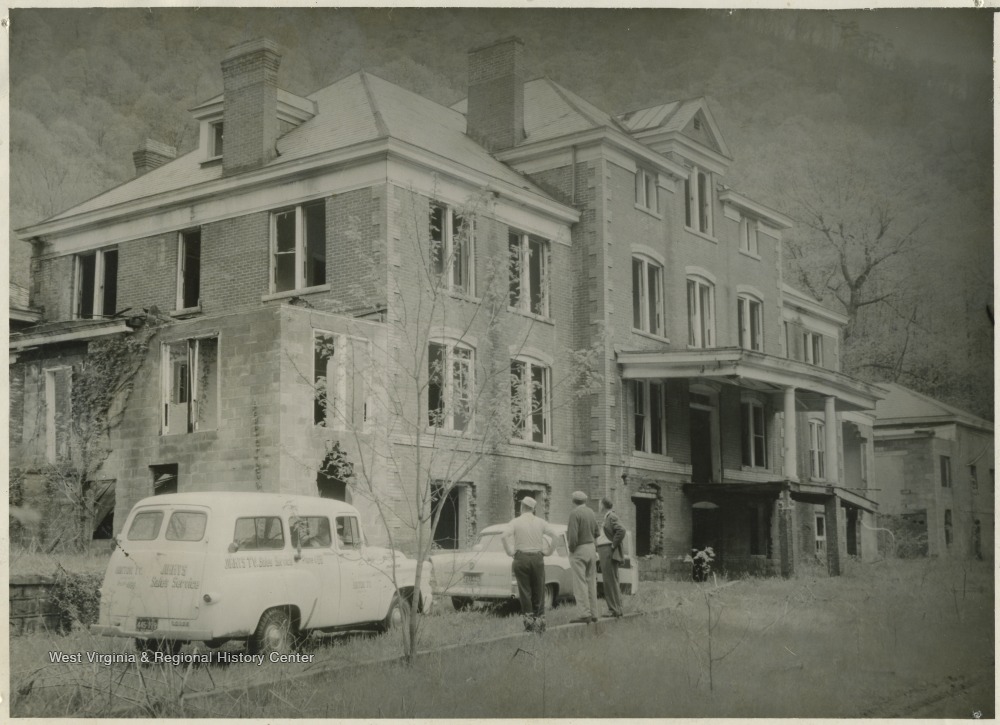 The front steps to the hospital are one of the only remaining grounds features. 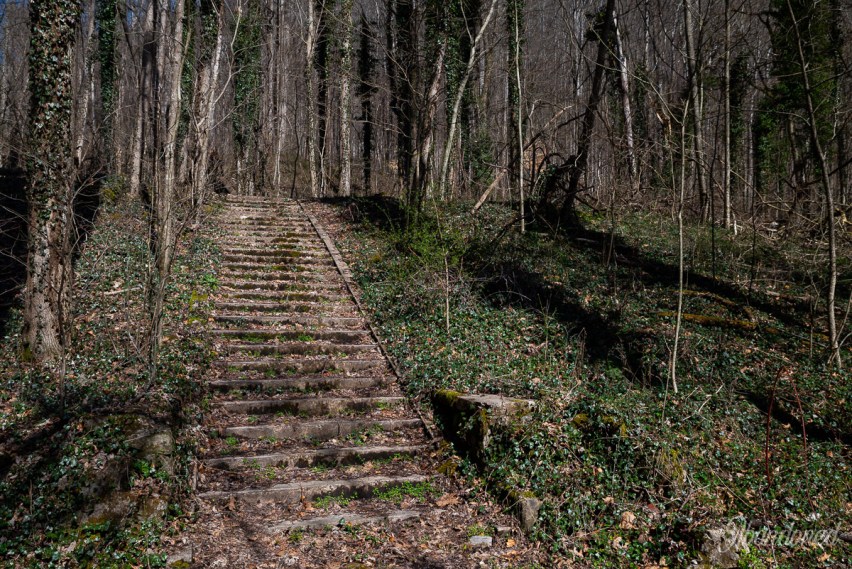 The foundations that remain have been heavily vandalized and graffitied. 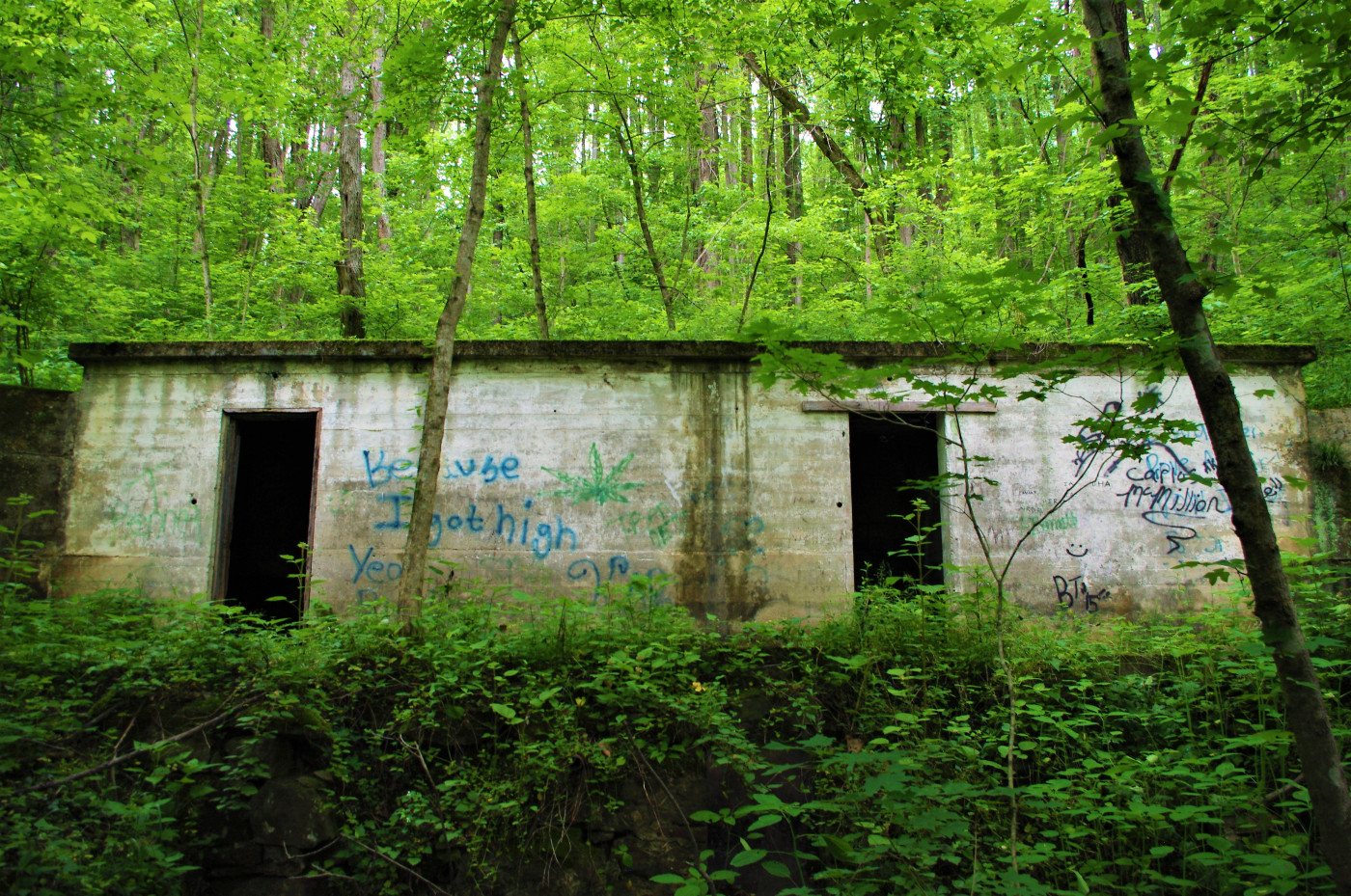 A perpetual constant in the coal mining industry is the risk of serious accidents and injuries. As physically hazardous economic development exploded in West Virginia at the end of the nineteenth century, the State Legislature responded by passing legislation to establish three miners’ hospitals around the states. One hospital was to be located in the far south of the state, one was to be located near Fairmont in the north central region, and the final one was to be located in the New River Gorge. For each site, a board consisting of a physician, a miner, a mine manager, and a coal shipper were tasked with selecting a location for their respective hospital. The only inflexible requirement was that the site was easily accessible by rail, as all coal mining took place adjacent to train routes. The board for the New River hospital chose McKendree as the site of the building. Though McKendree was a small logging town of approximately fifty residents, it possessed several attractive attributes. The town was centrally located in the New River Gorge, had easy access to the main line of the Chesapeake and Ohio Railroad, and most influentially, coal baron Joseph Beury offered to donate six and a half acres of land along with a five-year supply of free coal. Beury took a vested interest in the hospital because his mining town of Quinnimont lay just down the river from McKendree.

Construction began on McKendree Hospital circa 1900. A shallow bench approximately one hundred feet above the river provided a perfect place for the building, which was completed in 1901. The structure was a three-story brick affair with a limestone foundation. Italian immigrants worked as stonemasons to hand-carve walls, stairs, and other features of the landscaped grounds. Wards in the hospital were separated by both gender and race. In addition to typical hospital rooms — wards, administrative offices, superintendent and staff rooms, kitchen, etc. — McKendree’s post office was also held in the building. Lighting was provided by a carbide and water mixture pumped through pipes to lamps throughout the building. Coal-burning fireplaces were used to heat the hospital in the winter. Despite relatively advanced initial infrastructure, the building lacked a reliable source of water. Hospital administrators repeatedly petitioned the state to fund the construction of a well, but no approval was ever granted. Instead, water had to be pumped from the New River or Dowdy’s Creek a mile and a half away. Tied to issues of sourcing clean water, the facility also lacked a way to sterilize contaminated linens. These articles had to be sent to Charleston by train to be cleaned and then returned. Surgeries or treatments were often delayed due to the lack of utilities and linens.

When McKendree Hospital opened in 1901, all forty-two patient beds were immediately filled. Treatment was free for miners and railroad workers. All others were required to pay one dollar a day. Each day, nurses waited to meet incoming trains. If there was no space, the nurses were forced to turn away the injured. Nurses also had to turn away patients if there was any fear that the new patient might have a contagious disease, which the hospital would not risk treating. The hospital treated 171 patients in its first year, 77% of whom were miners. Burns were the most common injury, though thirty patients in the first year were there for the treatment of gunshot wounds. Approximately forty-five amputations or other major surgeries were conducted each month. The mortality rate in the hospital was high, not due to the quality of care, but due to the extremity of injuries. Many miners arrived with injuries so serious they could not be operated on and were instead only comforted in their final hours or days. The 1903 to 1904 operation year saw over double the number of patients treated in the hospital’s first year. This stretched the two doctors, one nurse, and eight to ten assistants extremely thin. Something had to be done to alleviate the poor ratio of staff to patients.

In March of 1910, a solution to the overburdened staff was implemented. A nursing school was established at McKendree Hospital and immediately began admitting students. Though the hospital was desperate for help, this was not reflected in the admissions process. Potential students were personally interviewed by the superintendents of both the hospital and nurses. Future nurses were expected to be healthy, intelligent, and of the highest moral stock. These qualities were judged during a two month probationary period that preceded formal admission. In 1920, the requirement that students also have a high school diploma was incorporated. Once admitted to the program, the nurses in training were provided room and board, laundry, and a ten dollar stipend to purchase personal supplies. Life was strict for the students. Daily inspections of uniform and appearance were standard and any failures were docked from pay. Students often worked upwards of twelve hours per day, followed by nightly lectures for half of the year. When off-duty, future nurses were confined to their bedrooms, the parlor, or, if exercising, the outdoors. The strict environment may not have been the most enjoyable place to study nursing, but it led McKendree’s program to be regarded as exceptional. Graduates of the hospital had no difficulty securing employment.

In the latter half of the 1910s, hospital superintendent Dr. H.L. Goodman significantly expanded and improved the building’s infrastructure. In 1917, a new boarding structure was built adjacent to the hospital to ease overcrowding in staff areas and free up more space for patient wards. Dr. Goodman also managed to secure funding to replaster the main building, update the heating and plumbing systems, and purchase an ambulance and truck. Despite treating far more patients than ever anticipated or intended, McKendree Hospital was well equipped for the task by 1919. Infrastructural improvements were complemented by the opening of two private hospitals in nearby Oak Hill and Montgomery, which heavily reduced the number of new patients at McKendree. Changes to facility procedures in the 1920s and 30s allowed for the care of epidemic victims, who were an increasingly large patient population as coal mining began to wane in the gorge.

The gradual cessation of coal mining in the New River Gorge eventually led to the closure of McKendree Hospital in 1941. That same year, the state reopened the building as the West Virginia Home for Aged and Infirm Colored Men and Women. About ninety-seven residents and sixteen staff members lived in the elderly care center. The building served this function until 1956, when Brown vs Board of Education mandated integration of public facilities, and the residents were moved to Huntington. McKendree Hospital was effectively abandoned overnight. A 1957 expedition gathered as many of the surviving documents and artifacts as possible. Most of these now reside in the West Virginia & Regional History Center. The hospital structure was dismantled brick by brick over the years by tourists and locals interested in reusing the materials as souvenirs or for their projects. By 1969, the property was completely dilapidated. The land was returned to the estate of Joseph Beury, which bulldozed the remaining walls. All that remains now are foundations and a few concrete rooms tucked into the hill. The National Park Service now owns the property.