The Peabody Library was founded in 1857 as part of the Peabody Institute, financier George Peabody's bequest to the city of Baltimore (his hometown) that was conceived as a comprehensive educational institute and source of civic virtue. The physical library was not completed until 1878, but it immediately became one of the most distinctive spaces in the city and a Baltimore landmark: a "cathedral of books." An unusual cast-iron frame building, the library functioned as a non-circulating research library in its early decades. In 1967, it joined the Enoch Pratt Free Library system, and in 1982 became part of the Johns Hopkins University and its special collections department.

Completed in 1878, this library was known as a "cathedral of books" and remains one of the cultural and literary centers of Baltimore. 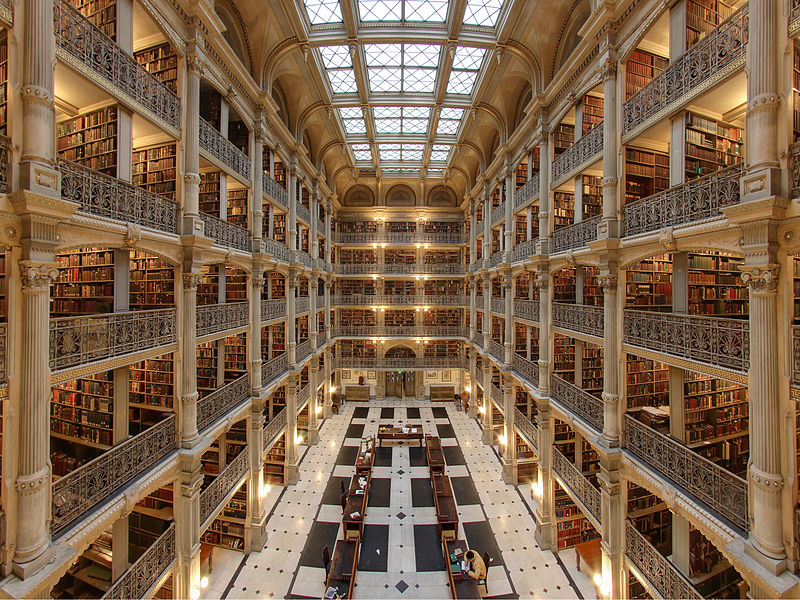 The Peabody Library's collection consists of about 300,000 books, largely focused on nineteenth-century publications. Although it still functions partly as a non-circulating research library, the Library could more properly be thought of as a museum of books, having made an effort to conserve a historical collection in situ. It also presents rotating exhibits from its collection in its foyer.

The Library is in the same physical structure as the Peabody Conservatory, but functions as a different unit of Johns Hopkins. It hosts a variety of public and private events in addition to its function as a library.

George Peabody rose from poverty to become one of the leading merchants and financiers in the United States. He worked to secure and maintain lines of credit for several states during the financial crisis of 1837 and it is likely that Peabody's actions kept Maryland and other states from defaulting on their loans. Peabody gave away half of his fortune while still alive, funding numerous libraries and museums and working to alleviate the condition of working class families in the United States and Britain.