The Clarence M. Mitchell, Jr. Courthouse is one of two buildings that make up the Baltimore City Circuit Courthouses. It was renamed in 1985 in honor of Baltimore native Clarence M. Mitchell, Jr., a prominent civil rights leader and chief lobbyist for the NAACP from 1950 to 1978. Construction began in 1895 and lasted for five years before the courthouse was dedicated and opened to the public in 1900. The courthouse occupies a full city block in downtown Baltimore and is also home to the Museum of Baltimore Legal History. Most of its original beauty has been preserved, including its granite foundation and marble facades, but perhaps most notable is the presence of numerous works of art housed within its walls, including the bronze statue of Cecilius Calvert, the second Lord Baltimore and First Proprietor of the Province of Maryland. 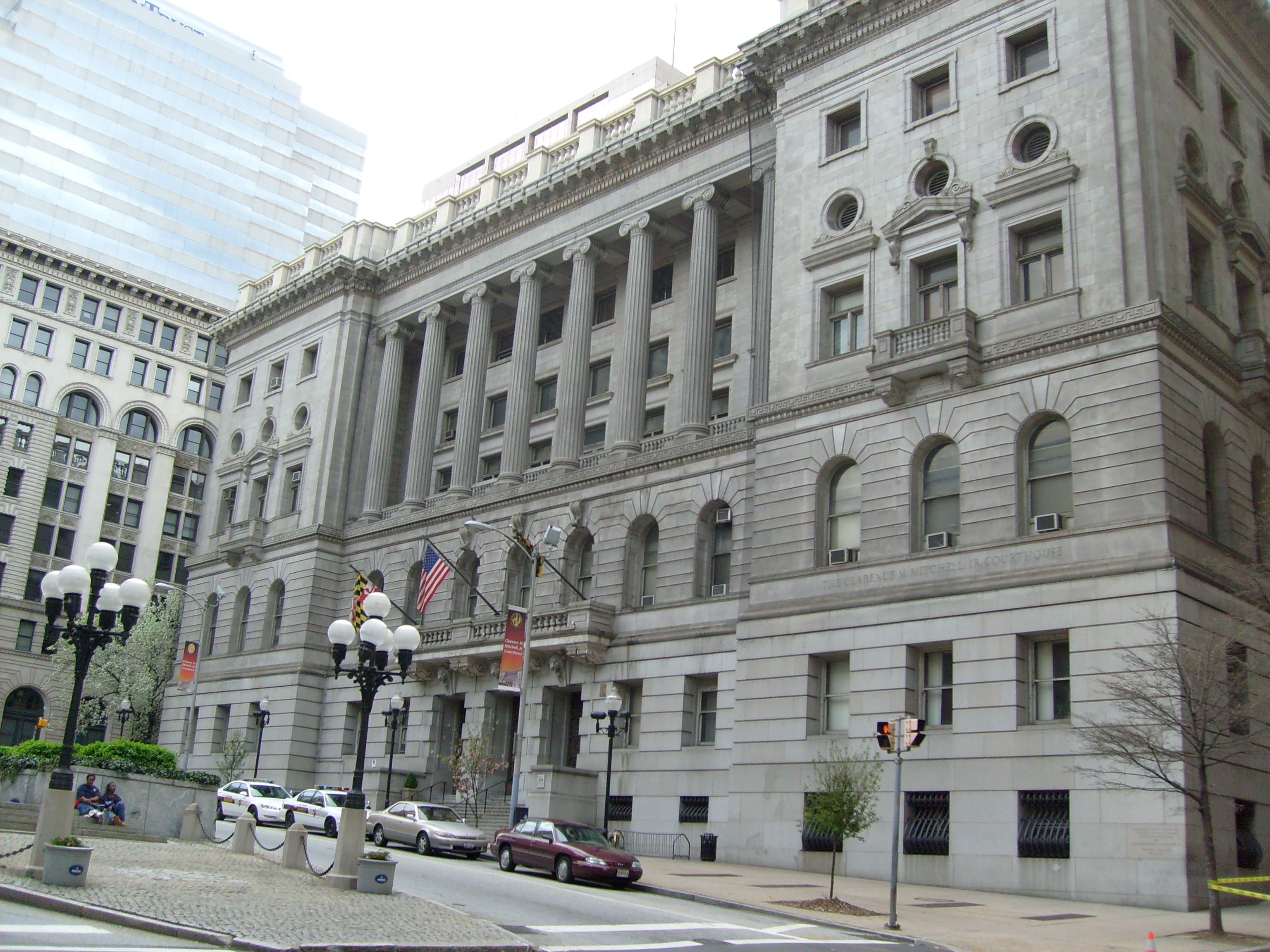 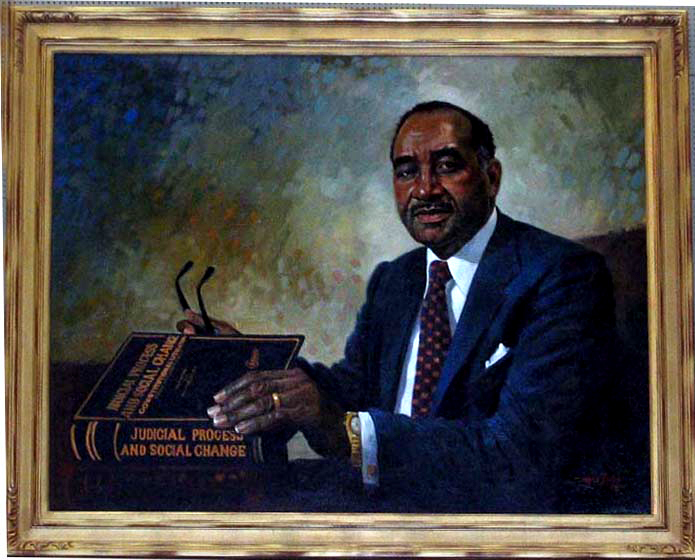 Art Glass Skylights - North Stained Glass Dome. These skylights were original to the courthouse and installed in 1900 towards the end of construction. They were restored in the late 20th century. Photo from Maryland State Archives. 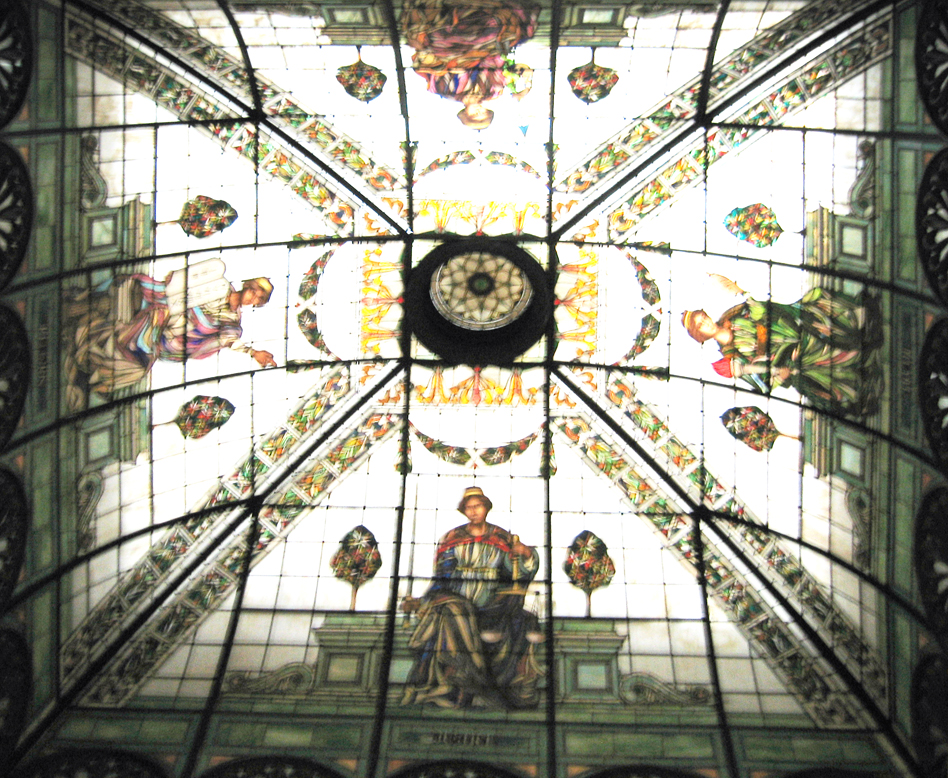 The Baltimore City Courthouse, as it was formally known, was Baltimore's last architectural undertaking in the 19th century. This neoclassical structure was officially opened on January 8, 1900, and still stands today as a beacon of justice in the heart of the city.

Six beautifully-painted murals were added in the decade following its opening. They stand as just a few of the notable fixtures within the courthouse walls and illustrate a number of scenes that feature prominent figures in Maryland‘s history. The murals include The British Surrender at Yorktown, Calvert’s Treaty with the Indians, Washington Surrenders His Commission, The Burning of the Peggy Stewart, and Religious Toleration and The Ancient Lawgivers. Another notable fixture is the artglass skylights that depict the goddesses of courage, justice, literature, logic, mercy, peace, religion and truth. These are located above the stairways on either side of Kaplan Court. Furthermore, many of these striking works of art are available for viewing on the Maryland State Archives website.1

Along with Courthouse East, The Clarence M. Mitchell, Jr. Courthouse houses the 33 judges of the Circuit Court of Maryland for Baltimore City. Furthermore, the courthouse contains the Baltimore Bar Library, which is one of the most complete and comprehensive law libraries in the nation. It also contains the Old Criminal Court (Room 215), where large portraits of Clarence M. Mitchell, Jr. and his wife, Juanita Jackson Mitchell, adorn the walls.

On March 8, 1985, the Baltimore City Courthouse was renamed the Clarence M. Mitchell, Jr. Courthouse. That day would have marked the civil rights leader’s 74th birthday. The rededication took place less than a year after he passed away, and the courthouse stands as a symbol of equality and impartiality under the law. For more information on Clarence M. Mitchell, Jr.'s storied career and contributions to the Civil Rights Movement, the nearby Thurgood Marshall Law Library at the University of Maryland houses an impressive collection of his papers and historical documents.2