The Space Needle is an observation tower in Seattle, Washington. It is a landmark of the Pacific Northwest, and a symbol for the city of Seattle. It was built in the Seattle Center for the 1962 Worlds Fair, which drew over 2.3 million visitors. Nearly 20,000 people used its elevators a day during the 1962 World's Fair. The Space Needle was once the tallest Structure west of the Mississippi River, at 605 feet high. It was built to withstand winds of up to 200 miles per hour, and earthquakes of up to 9.1 magnitude. The structure also has 25 lightning rods which protect it in the event of a lightning strike. On May 19, 2007 the Space Needle welcomed its 45 millionth visitor. The guest received a free trip for two to Paris, and included a VIP dinner at the Eiffel Tower. Every year on New Year's Eve, the Space Needle celebrates with a fireworks show at midnight that is synchronized to music. In April of 2012, as part of the 50th anniversary celebration, the Space Needle was painted Galaxy Gold which was the same color used when it was constructed for the 1962 World's Fair. 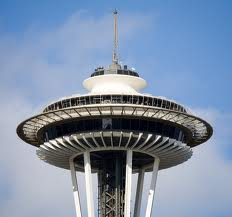 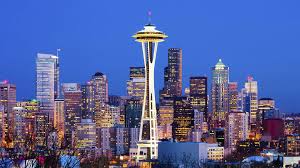 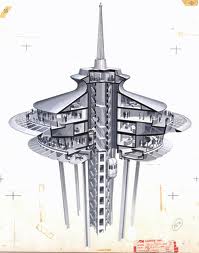 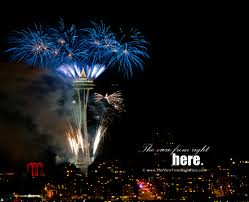 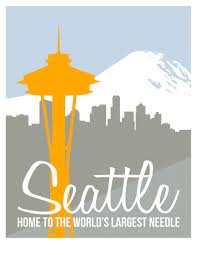 Picture showing the colors of the Space Needle. 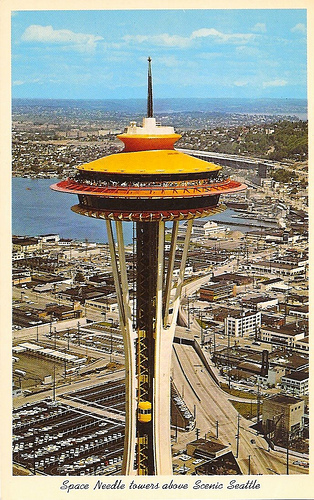 In 1959, artist Edward E. Carlson sketched a vision of the Space Needle on a napkin in a coffee house. He was inspired by the Stuttgart Tower in Germany. His goal of his "space-age" image was to be the focus of the futuristic World's Fair in Seattle, and the theme would be the 21st century.

Carlson's initial sketch of the Space needle underwent many changes. The sketches varied from a tethered balloon to a balloon-shaped top house, until finally John Graham, architect of the world's first shopping mall, turned the balloon design into a flying saucer. Graham finished the design just a year and a half before the World's Fair.

The next struggle in the building of the Space Needle were location and financing. The Space Needle need to be privately financed, so it had to be on a land that could be for public us. It wasn't until 1961, only a year before it was finished, that a land was found and sold to investors for $75,000.

The construction was managed by the Howard S. Wright Construction Company, and progressed very quickly. Once it was finally completed, the foundation weighed as much as the Space Needle itself , the center of gravity being just five feet above ground.

The five level top house dome was finished with special attention to the revolving restaurant, rotated with just one horsepower electric motor, and the Observation Deck. The final painting consisted of astronaut white for the legs, orbital olive for the core, re-entry red for the halo, an galaxy gold for the sunburst and roof. From the top of the Space Needle you can observe downtown Seattle, the Olympic and Cascade Mountains, Mount Rainier and Mount Baker, Elliot Bay, and the surrounding islands.