The Kobe Bell Meditation Garden was created for the 1962 World's Fair, which was held in Seattle at the Old Fair Grounds (now the site of the Seattle Center Campus). The cast bronze Kobe Bell, also called the Friendship Bell, was presented to the city of Seattle in 1962 as a gift from its sister city: Kobe, Japan. A partnership between the two cities was formed in 1957 as part of a broader post-World War II effort to develop ties to foster global peace, cooperation, and understanding. The Kobe Bell is housed within a small wooden Japanese pagoda. 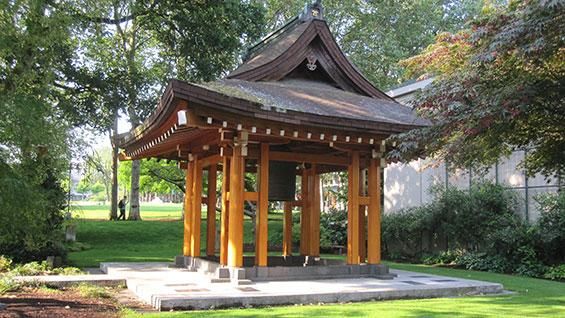 Kobe Bell at the 1962 World's Fair in Seattle 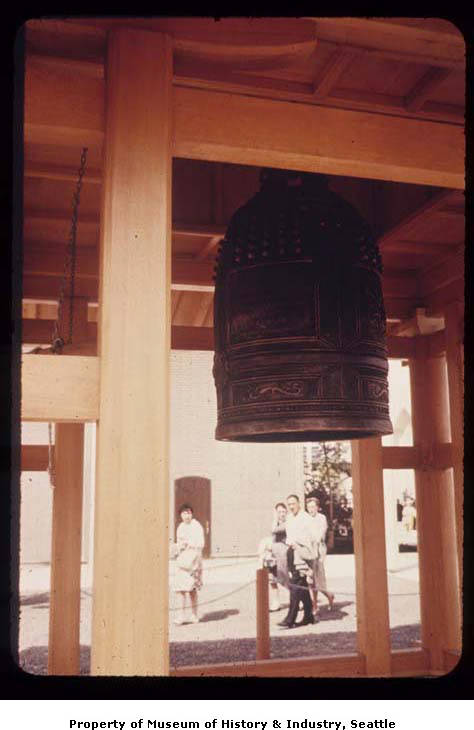 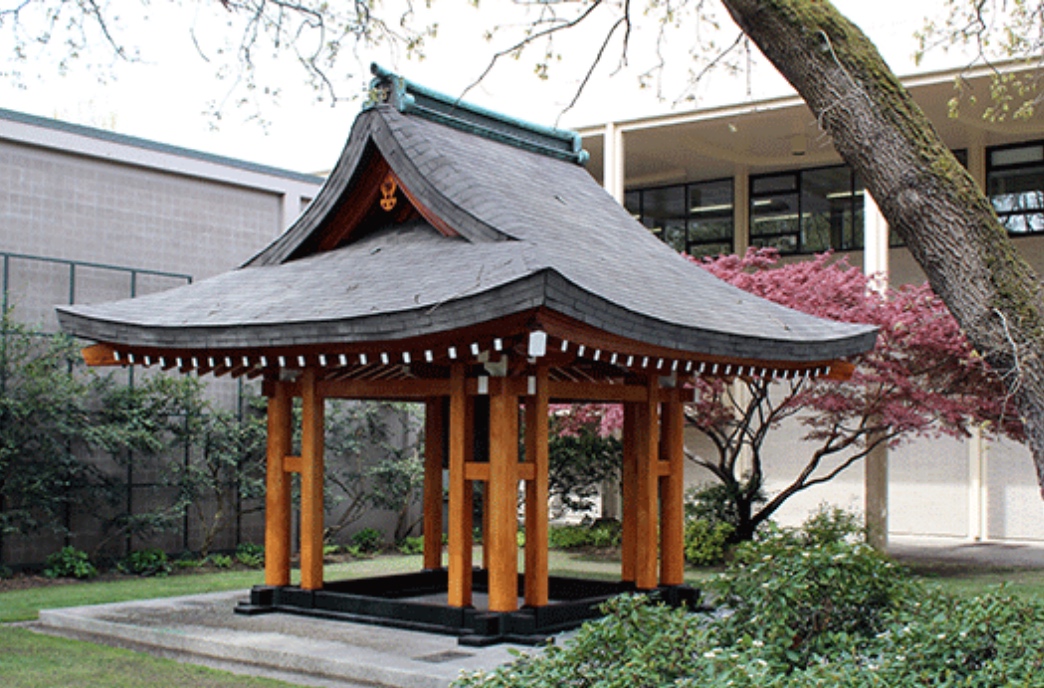 The cylindrical, cast bronze Kobe Friendship Bell was sent from Kobe, Japan, to the city of Seattle, as a hallmark of friendship between the sister cities. This municipal government partnership was established after World War II, when President Dwight Eisenhower asked city governments around the world to develop ties as a sign of peace and to foster cooperation.

Cities in different parts of the world were encouraged to establish partnerships with other municipalities whether or not they had traditionally been allies. With this initiative in mind, in 1957 the mayor of Seattle, Gordon Clinton, reached out to the city of Kobe, Japan, where Mayor Hagaruchi accepted the invitation for a sister-city relationship. A few years later, the city of Kobe sent the Friendship Bell to Seattle for the 1962 World's Fair. The bell is housed within a small Japanese-style wooden pagoda.

The inscription on the inside of the bell reads as follows:

Presented by the People of Kobe to the People of Seattle as a Symbol of Friendship. May this Bell Ring Forever Signifying Friendship and Goodwill between the Nations of the United States of America and Japan.

True to the Japanese style, the Kobe Bell does not contain an interior clapper. Rather, the bell is sounded with a large log that is suspended above the bell at a right angle. This log is used to ring the bell from the outside by clanging it against the metal exterior. The bell is richly decorated with images of a dragon on the upper portion, and bas-relief scenes of Japanese gods playing flutes and drums on the lower portion of the bell.

On Friday afternoon of January 17, 2015, the Kobe Friendship Bell was sounded in Seattle to commemorate the twentieth anniversary of an earthquake that shook Kobe, Japan on January 17, 1995. The 1995 Great Hanshin Earthquake was considered one of Japan's worst natural disasters up to that point. After the bell was rung, a moment of silence followed to honor the victims of the quake that had occurred the exact same day two decades earlier in Seattle's sister city of Kobe, Japan.