Widely considered to be one of the most impressive monuments in all of New York City, the Bronx Victory Memorial stands over 110 feet tall in Pelham Bay Park. It serves to honor the 947 World War 1 servicemen from the Bronx who lost their lives in the first world war. It was erected in 1932 and dedicated in 1933.

The base of the monument reads: "A GRATEFUL CITY ERECTED THIS SHAFT TO THE GLORIOUS MEMORY OF ITS BRONX COUNTY SONS WHO GAVE THEIR LIVES FOR THEIR COUNTRY IN THE WORLD WAR" 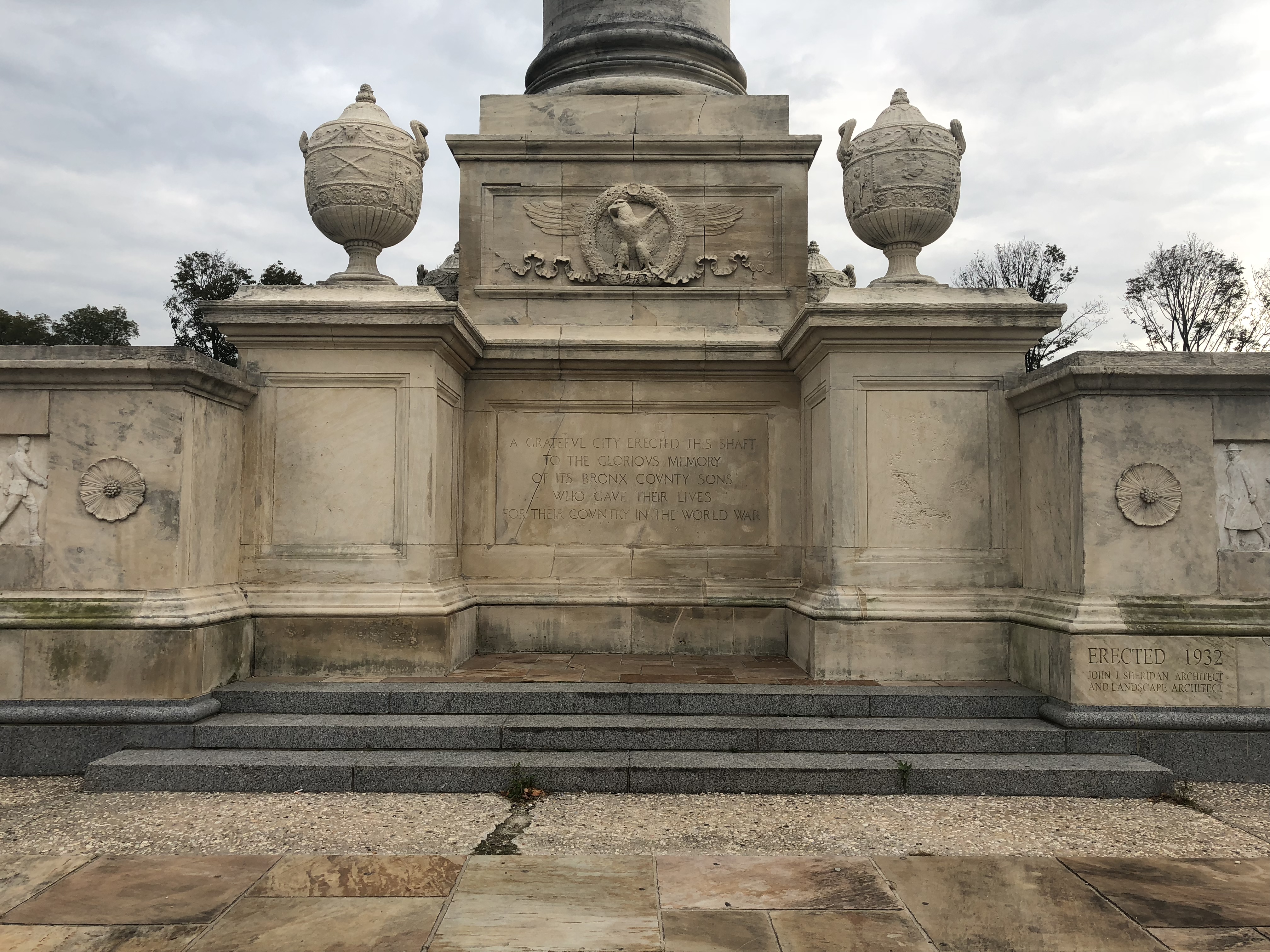 The base of the monument: soldiers march. Photo: Nate Rosen, November 1, 2017. 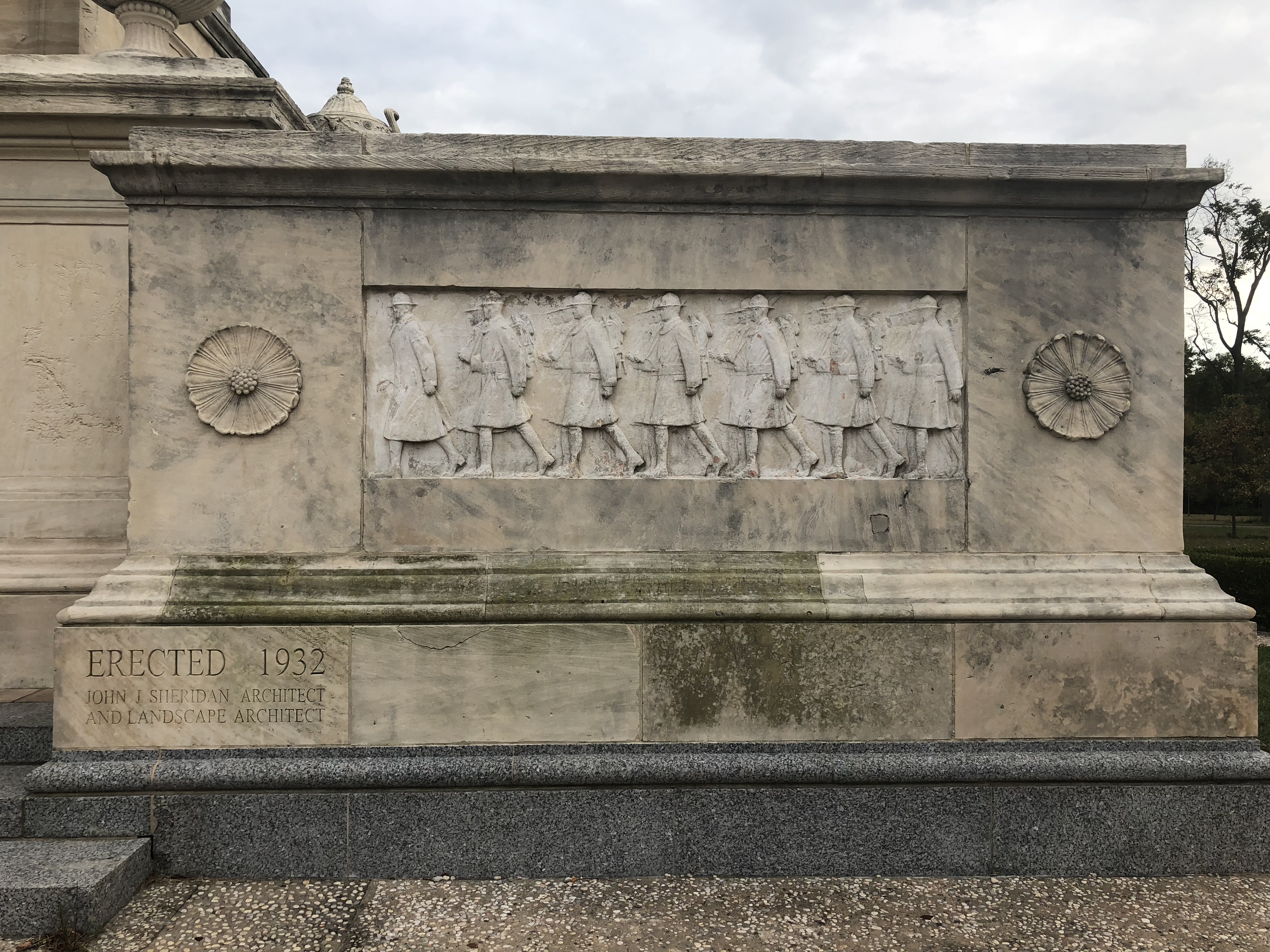 The monument with a human for scale. 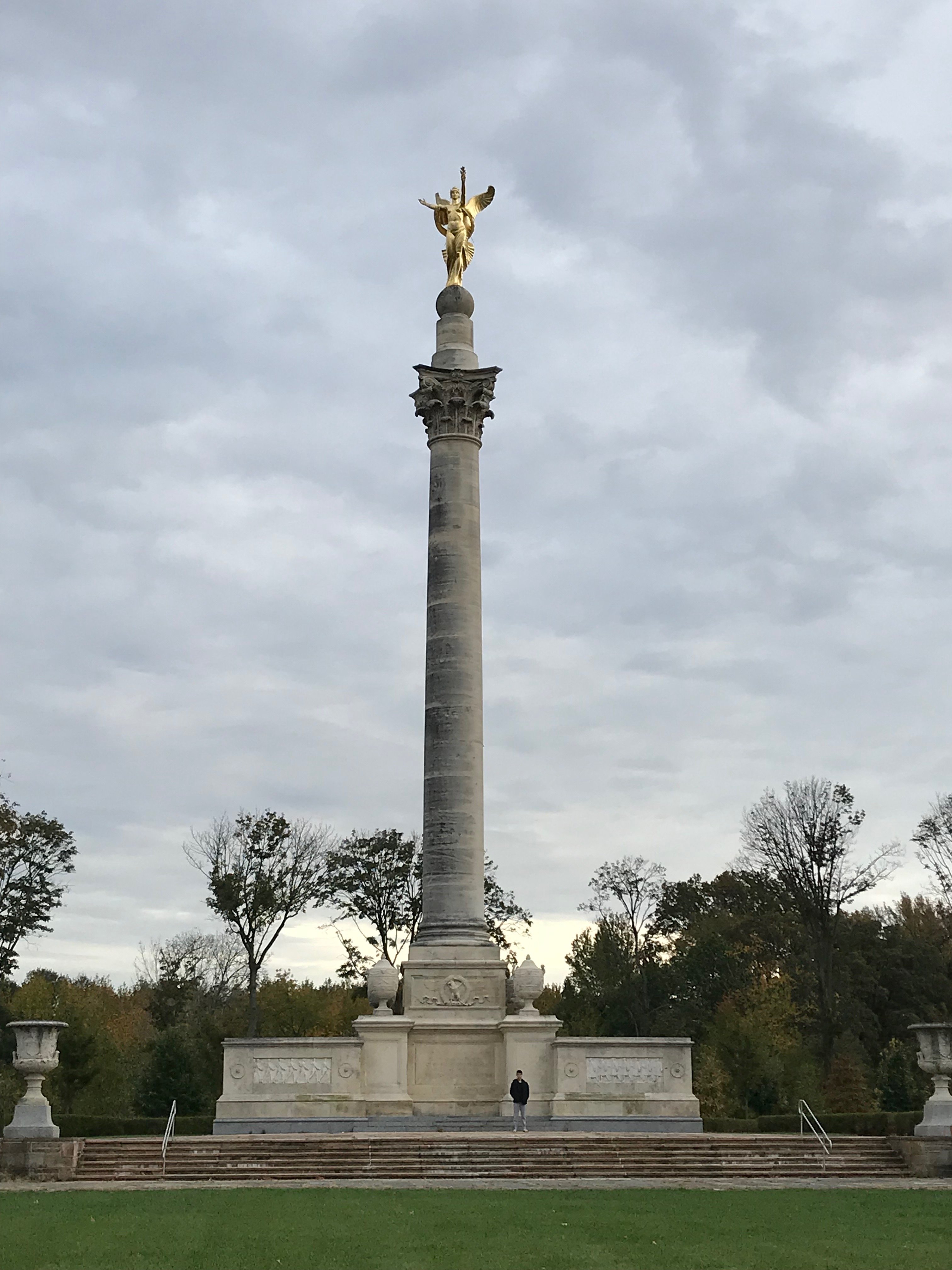 Prior to the Bronx Victory Memorial, the Bronx honored those it lost in the Great War in a simple way. In 1921, a short 3 years after the war's end, the American Legion planted rows of trees along the Bronx Grand Concourse, a main thoroughfare. Each tree had a bronze plaque dedicated to a fallen soldier. Unfortunately, the trees would be forced to find a new home in 1928, when the Grand Concourse would be renovated to be wider, with a new subway beneath it. At the request of several different veteran groups, the trees were to be moved and consolidated into a Memorial Grove at Pelham Bay. The efforts of these groups would coalesce and result in the eventual plan to erect a unified monument in honor of all 947 Bronx residents who died in the Great War.

Initial plans for the monument were submitted in the spring of 1930 by Bronx Parks Commissioner Thomas J. Dolen to the New York City Art Commission. The site initially proposed for the monument would change to prevent the need to remove the memorial trees again, and forbid a backdrop of buildings for the new monument. A known New York-based architect of the time, John Joseph Sheridan would be commissioned to design the monument. That decision was based on his prior work, but also on the fact that he himself had served as an infantry captain during the war. The monument he conceived would be built: flanked by two gravel paths with granite flagstone borders around a rectangular floral bed, including numerous types of flowers. A hedge of barberry and Carolina hemlock framed the entire garden.

On the south side of the monument, on either side of a set of a central staircase are limestone urns and huge terra-cotta pots. At the terrace level, on the side of the monument’s base are reliefs depicting regiments of soldiers as they march. Likely the most notable aspect of the memorial is the 18-foot-tall, 7,300 pound “Lady of Victory” stood atop a stone globe at the end of a 70-foot-tall columnn. All this rests atop the 18-foot-tall base, which gives the monument over 110 feet in total height. Stylistically, the monument follows in the American tradition of erecting monuments in the Greco-Roman style.

The monument was dedicated, with much fanfare, on September 24, 1933. Mayor John P. O’Brien (1873–1951), Commissioner Dolen, and former acting mayor Joseph V. McKee (1889-1956) all gave addresses. A parade took place, featuring a massing of colors, an aviation display and live music performed by the Police, Fire and Sanitation Departments’ bands. Mrs. Julia Zimmerman, president of the Bronx Gold Star Mothers would unveil the statue.