Erected in 2006 on 5th Avenue and 142nd street, the 369th Infantry Regiment Memorial obelisk honors the all-Black Harlem Hellfighter’s regiment that served the United States’ allies in World War One. Being the first American unit to earn the Croix de Guerre -- the highest ranking award in the French military -- the 369th fought bravely and brought pride and honor to not just the United States, but African Americans as a whole. 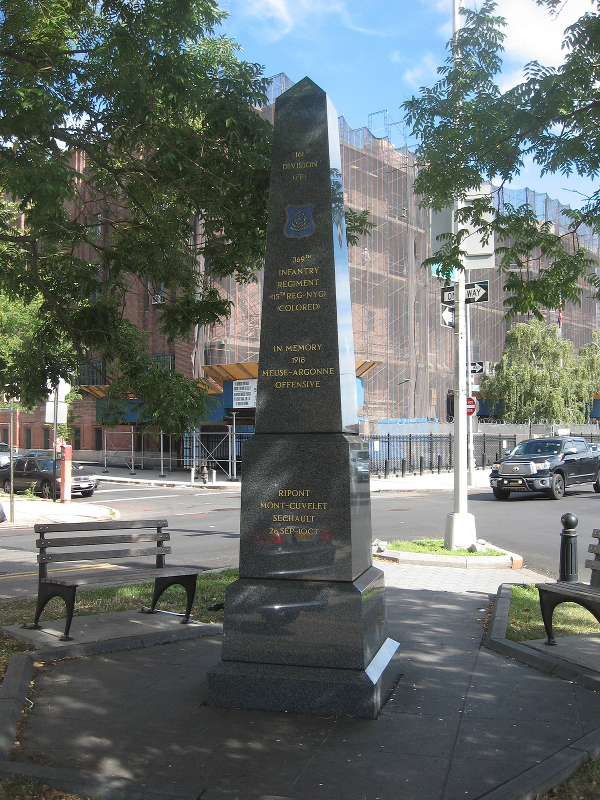 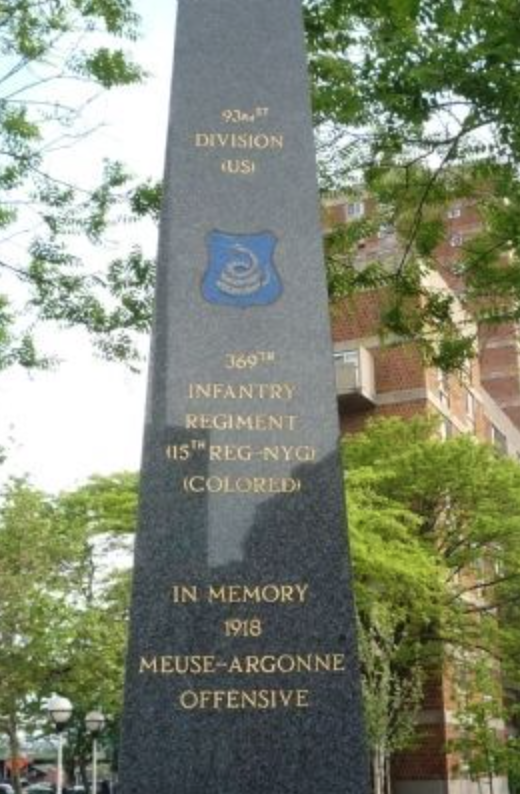 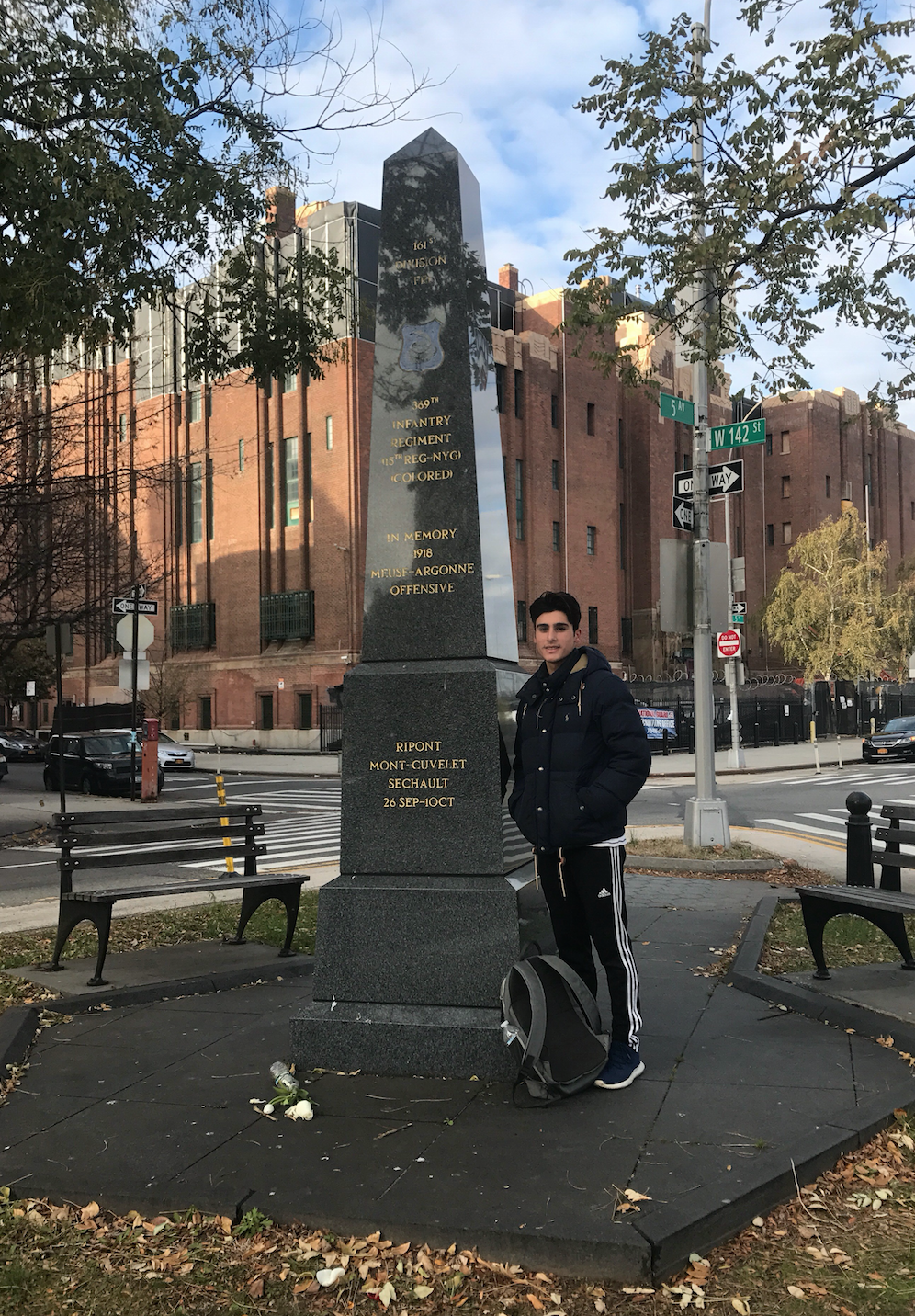 Erected in 2006 on 5th Avenue and 142nd street, the 369th Infantry Regiment Memorial obelisk honors the all-Black Harlem Hellfighter’s regiment that served the United States’ allies in WW1. In addition to fighting the Germans and other Central Powers, the Harlem Hellfighters struggled to overcome racism and discrimination that would follow them from the United States into France. However, when finally given the opportunity to prove their courage and valor in the trenches of war-torn France, they brought honor to both the United States and the Black race.

In the United States, racial segregation within the social sphere was ubiquitous, and it was no different within the military. Black and white troops served in separate regiments that would not be desegregated until the end of World War II. And, when Black troops such as those in the 369th Infantry Regiment were sent to France, strict orders were given to French leadership to instruct their officers to treat the Black soldiers as inferior to whites.

"It is necessary to avoid all excessive intimacy between French officers and Black officers, with whom one can be correct and kind, but whom one cannot treat on equal footing with white American officers without wounding the latter profoundly"(Linard 16-17).

Thus, the Black soldiers of the 369th would have to overcome the pressures of not just war, but discrimination as well.

The 369th referred to themselves as the “men of bronze,” but later became renown as the “Harlem Hellfighters,” a name given to them by their German foes because of their ferocity in battle (Jackson). Being the first American unit to be awarded France’s highest military honor, the Croix de Guerre, the Harlem Hellfighters served more than six months and suffered approximately 1500 casualties in the trenches at the battles of Belleau Wood and Chateau-Tniery. Furthermore, historians claim that the Hellfighters were the first unit to cross the Rhine into Germany, proving their courage in the face of danger (Mikkelsen).

Written on the obelisk, “In memory 1918 Meuse-Argonne Offensive,” which began on September 26 of 1918. With a strong display of strength, the 369th captured the town of Ripont in only the first day of battle and continued to advance forward at least one kilometer a day. Despite facing strong resistance by the Central Powers, the 369th pushed forward and by September 30th held an important position near Sechault and capital critical railroad junctures. In recognition of their valor in the offensive, 171 of the colored officers received medals of honor, and the 369th received the Croix de Guerre. (American Battle Monuments Commission).

At the end of the war, the 369th regiment returned to New York City as heroes and on February 17, 1919 paraded up 5th avenue. Revered with pride, the 369th was greeted with thousands of inspired African Americans in New York City, viewing the day as an unofficial holiday. (Gates)

The Harlem Hellfighters were not just honored by African Americans, but by the French as well. Indeed, the Obelisk on 5th Avenue is not an original memorial, but a replica of an original memorial erected in Sechault, France in 1997 (Sammons 255). And, despite winning the respect of France and others, racist and segregationist America would find it difficult to honor the 369th Regiment immediately after the war, as made clear by the fact that the obelisk replica was erected so many years after the war in 2006. "Most of them fought and lived or died in obscurity; for the fallen their only memorial is a marble cross in one of the American cemeteries in France," says Sammons (Sammons 447). Moreover, in order to secure the monuments for the 369th Regiment, the NAACP and other pro-African American organizations had to fight for the recognition that the 369th deserved and thus helped push for the funding of the 369th Armory and the erection of the 369th memorial obelisk on 5th Ave in NYC (Sammons 4-5).