The Abingdon Square Doughboy is one of the many sculptures in New York City that represents the American soldiers from World War I. This is one of the ways that the city honors World War I in a public setting.

Photo of the statue in Abingdon Square Park. 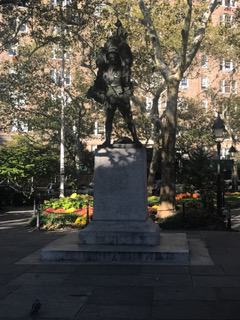 Size of the statue in comparison to human scale, 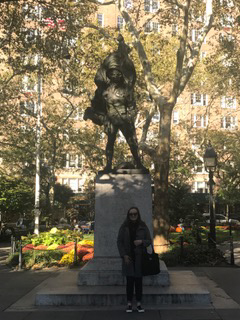 The Abingdon Square Doughboy is located in Abingdon Square Park on West 12th Street and 8th Aveune in Greenwich Village. It was created by scluptor Philip Martiny in 1921 and dedicated in the same year. This is one of the few Doughboy statues located in New York City. It depicts a solider in a heroic pose on a tall pedestal. It is a “sculpture that honors those servicemen from Greenwich who gave their lives in World War I”1, showing one of the many ways that the public recognized local soldiers for their sacrifice in the war. This is also shown in the sculpture’s inscription, which states: “ERECTED / BY POPULAR SUBSCRIPTION / IN HONOR / OF THE BRAVE MEN / WHO WENT FORTH / FROM THIS NEIGHBOR- / HOOD TO JOIN THE / ARMED FORCES OF / THE UNITED STATES DURING THE WORLD WAR”2.

The name “Doughboy” is commonly used to refer to American soldiers that were sent to fight in Europe during the war; however, there are many theories to how the name came to be. “According to one explanation, the term dates back to the Mexican War of 1846-48, when American infantrymen made long treks over dusty terrain, giving them the appearance of being covered in flour, or dough”3. Another popular explanation is that soldiers often used white clay to pipe their uniforms, which made them look doughy4. Other lesser-known theories include the Baked Goods Theory, which comes from the method that soldiers would use to cook their rations and made their food look like dough, and The Button Theory, where the soldiers wore brass buttons that looked like dumplings which were commonly eaten by soldiers5. This is an example how different words were developed or changed in meaning during World War I; however, the term “doughboy” is unique in that it does not have clear origins in terms of it referring to American soldiers.

Another interesting feature of this sculpture is that there are many other doughboys that were erected throughout public settings in the United States. “These doughboy memorials, all featuring the statue and a stone or brick base, can be found in 39 U.S. states. They sit in town squares, in cemeteries, in front of federal buildings, and in parks. There are around 145 of them, and they all look very familiar—for a good reason. These statues are among the first known mass-produced memorials in existence.”6 Some are also found in New York City including another one made by Martiny in the Chelsea neighborhood. The fact that these doughboys are found in public areas implies that they are intended for a wide range of viewership and easy access to all so everyone can learn about those who served the country in World War I. It also gives these soldiers a sense of a larger identity since this war was dehumanizing in many ways. It also shows how many men served from very small neighborhoods.

5. “THE ORIGINS.” Origins of "Doughboy", www.worldwar1.com/dbc/origindb.htm.

6. Sedlak-Hevener, Amanda. “Why Do So Many U.S. Towns Have the Same WWI Soldier Statue?” Atlas Obscura, 11 Apr. 2017, www.atlasobscura.com/articles/wwi-doughboy-statue.