In 1920, this plot of land was donated to the City of New York and named Hero Park, in honor of the 144 Staten Island men who were killed in the Great War. Sugar Loaf Rock, the most prominent feature located towards the center of the park, has been adorned with several plaques (pictured below) which honor the men by name and further emphasize the Staten Island heritage of these brave men.

A. Sugar Loaf Rock, with main plaque on the northwest face. 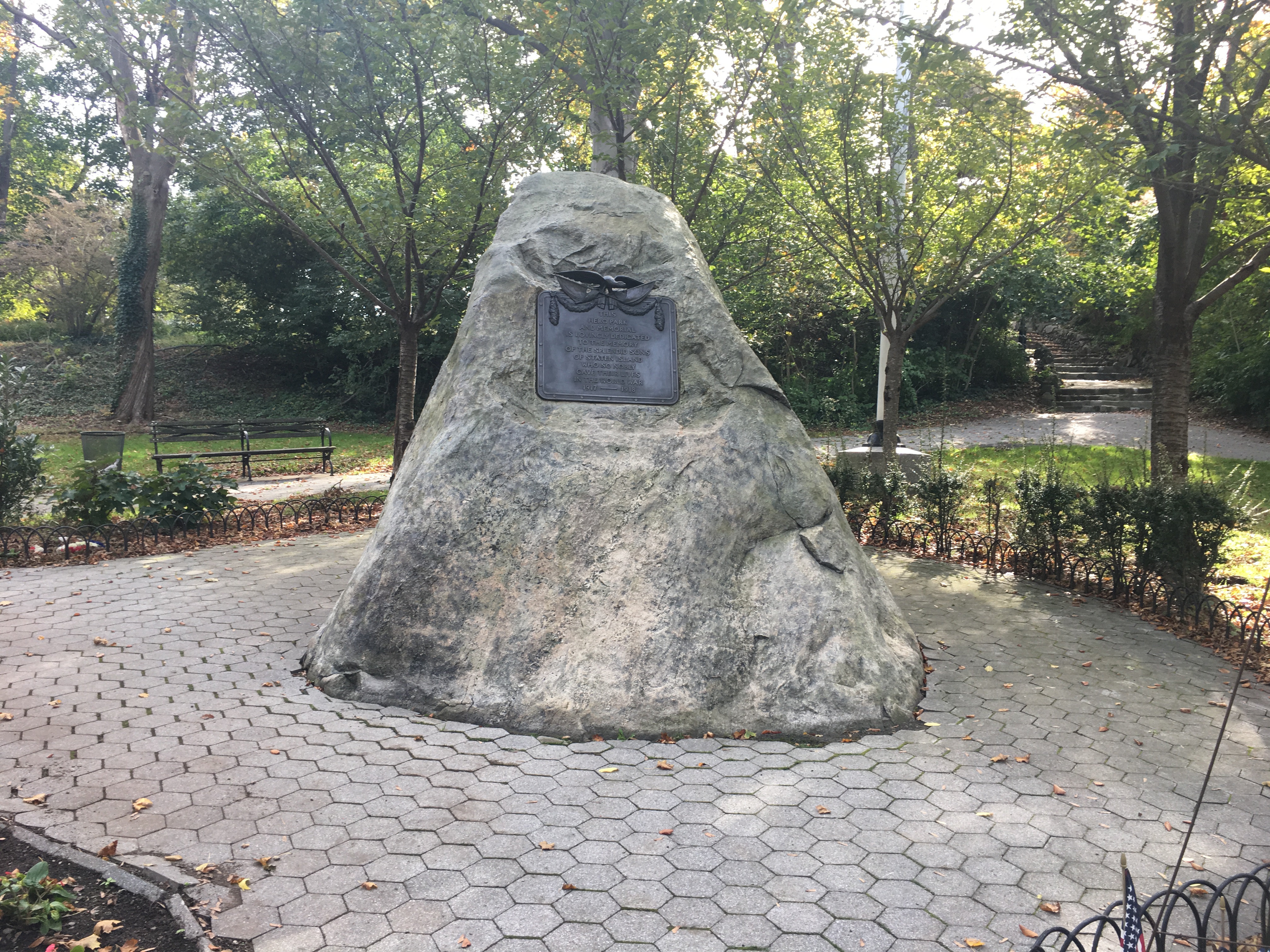 B. Sugar Loaf Rock, as compared to the size of a person 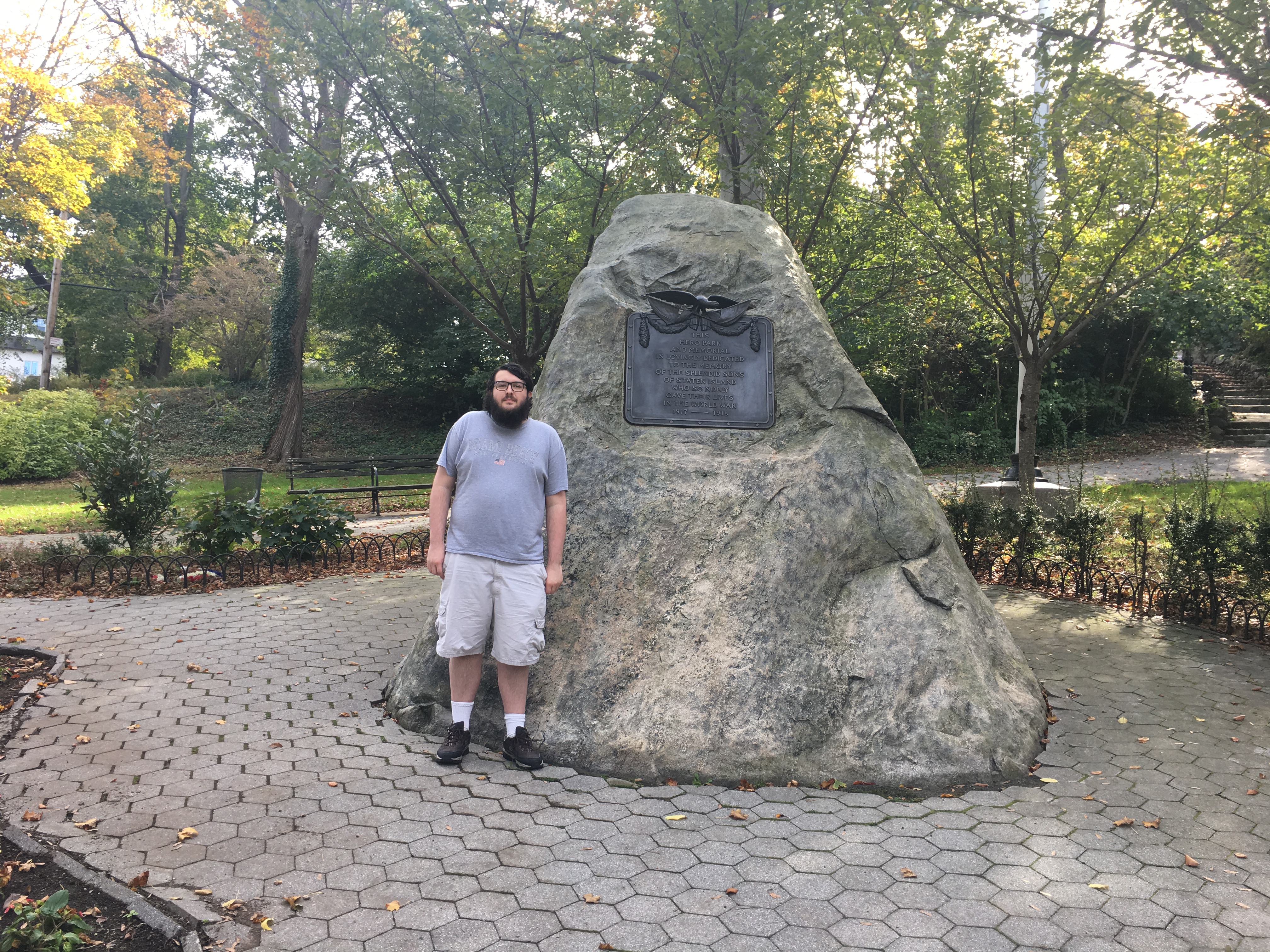 C. A closer view of the main plaque. It reads "THIS HERO PARK AND MEMORIAL IS LOVINGLY DEDICATED TO THE MEMORY OF THE SPLENDID SONS OF STATEN ISLAND WHO SO NOBLY GAVE THEIR LIVES IN THE WORLD WAR 1917 - 1918 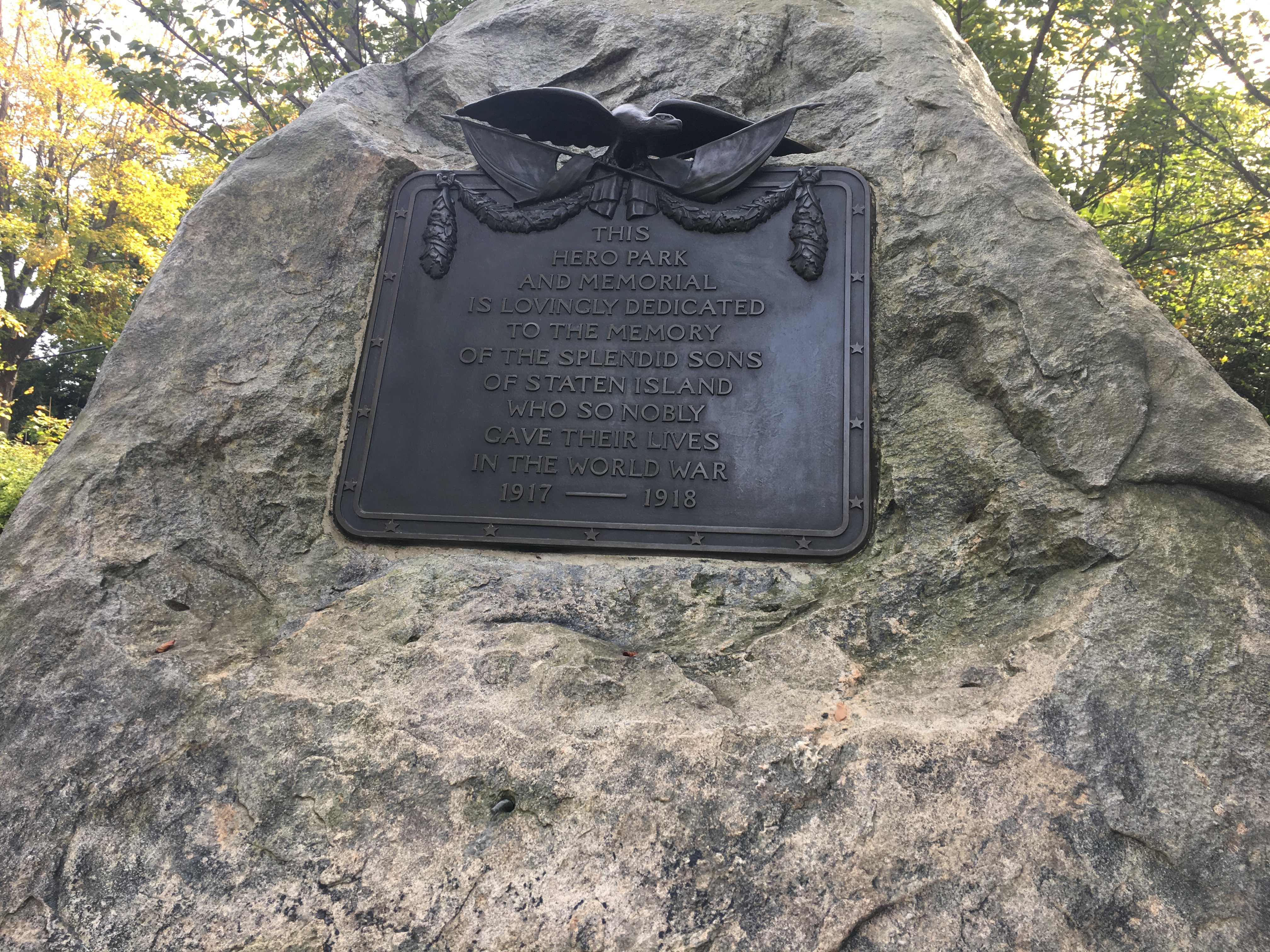 D. The plaque naming each of the Staten Island fallen by name 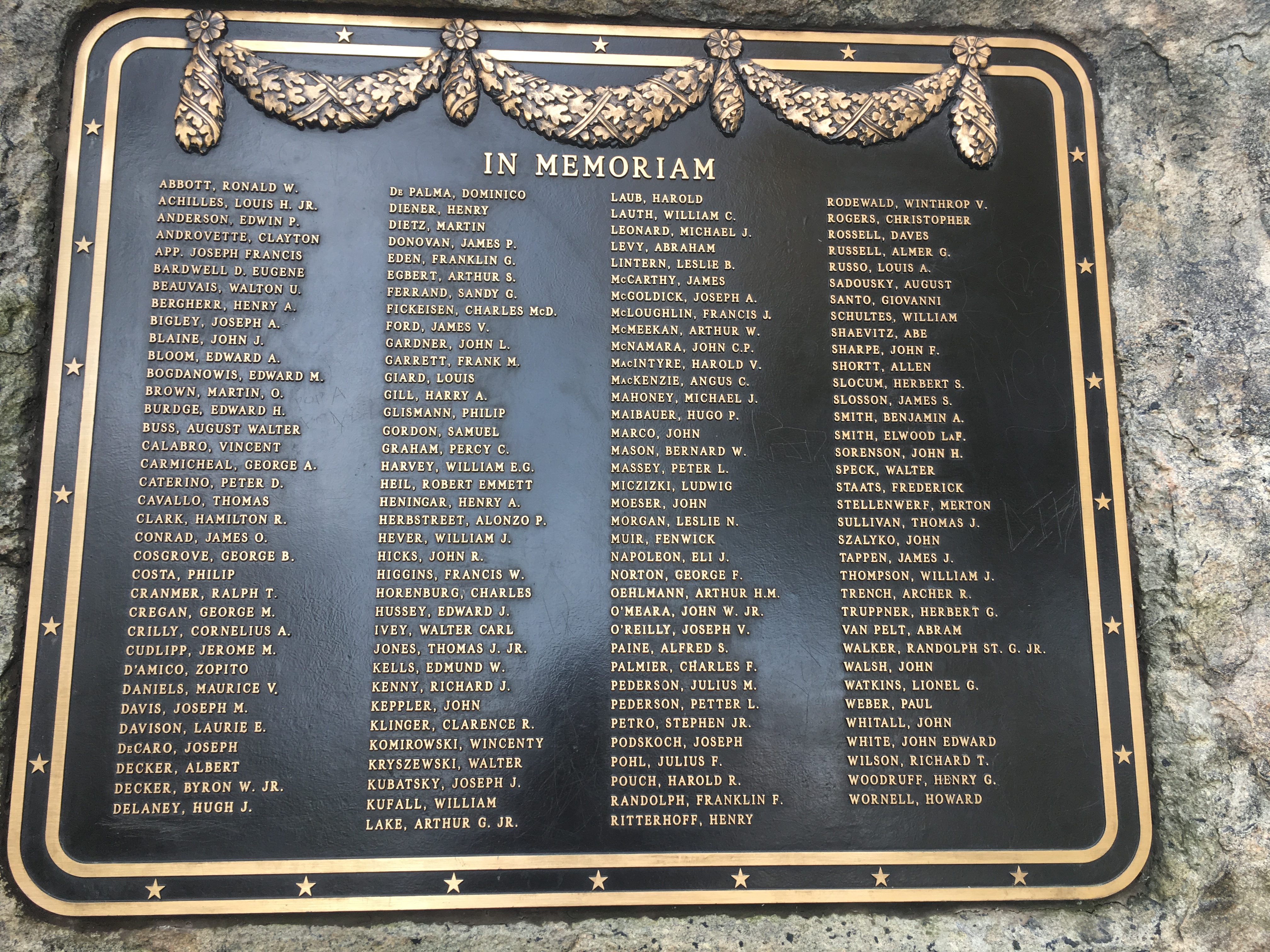 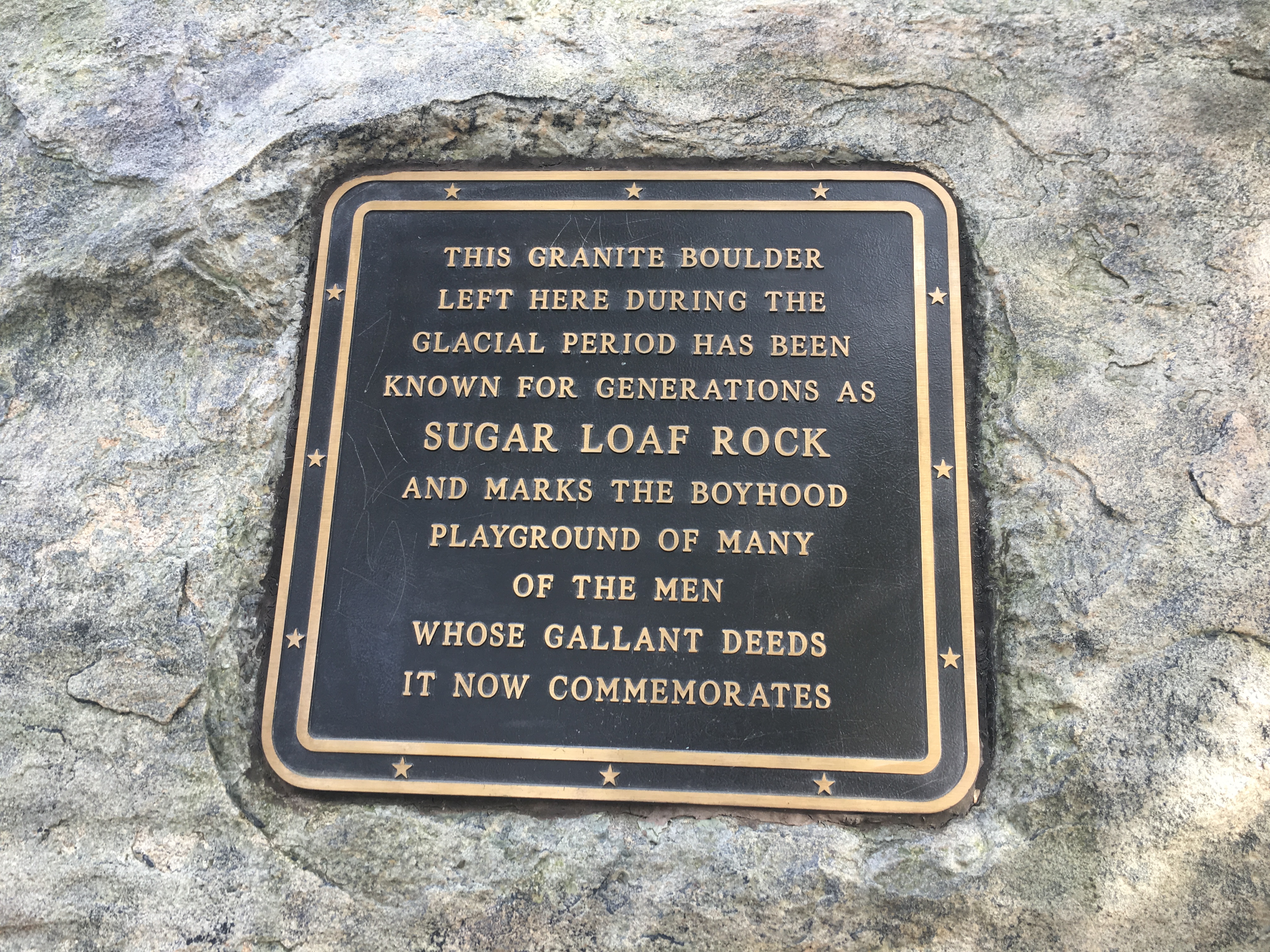 F. The plaque commemorating Mr. and Mrs. Dreyfus for their contribution. 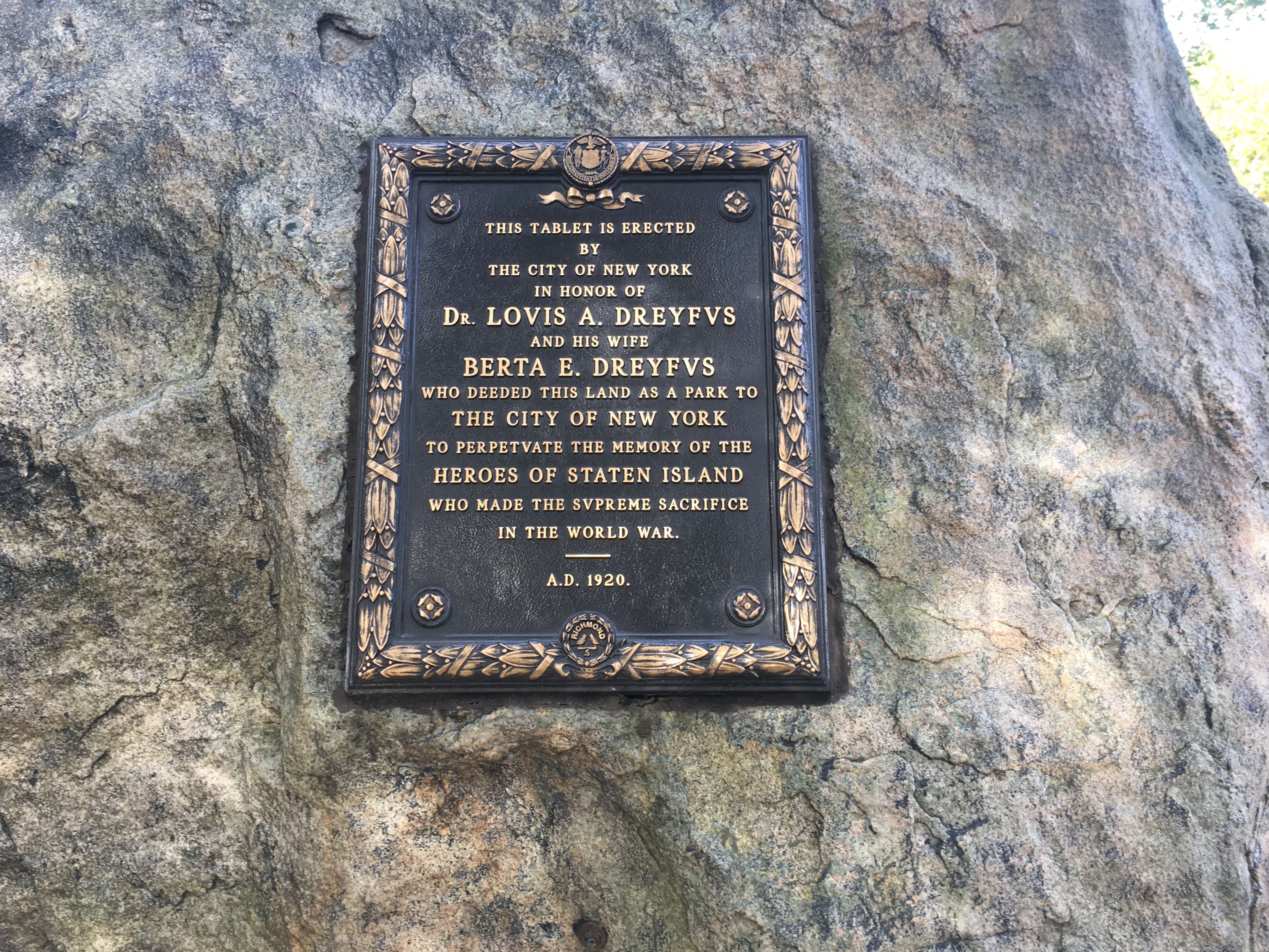 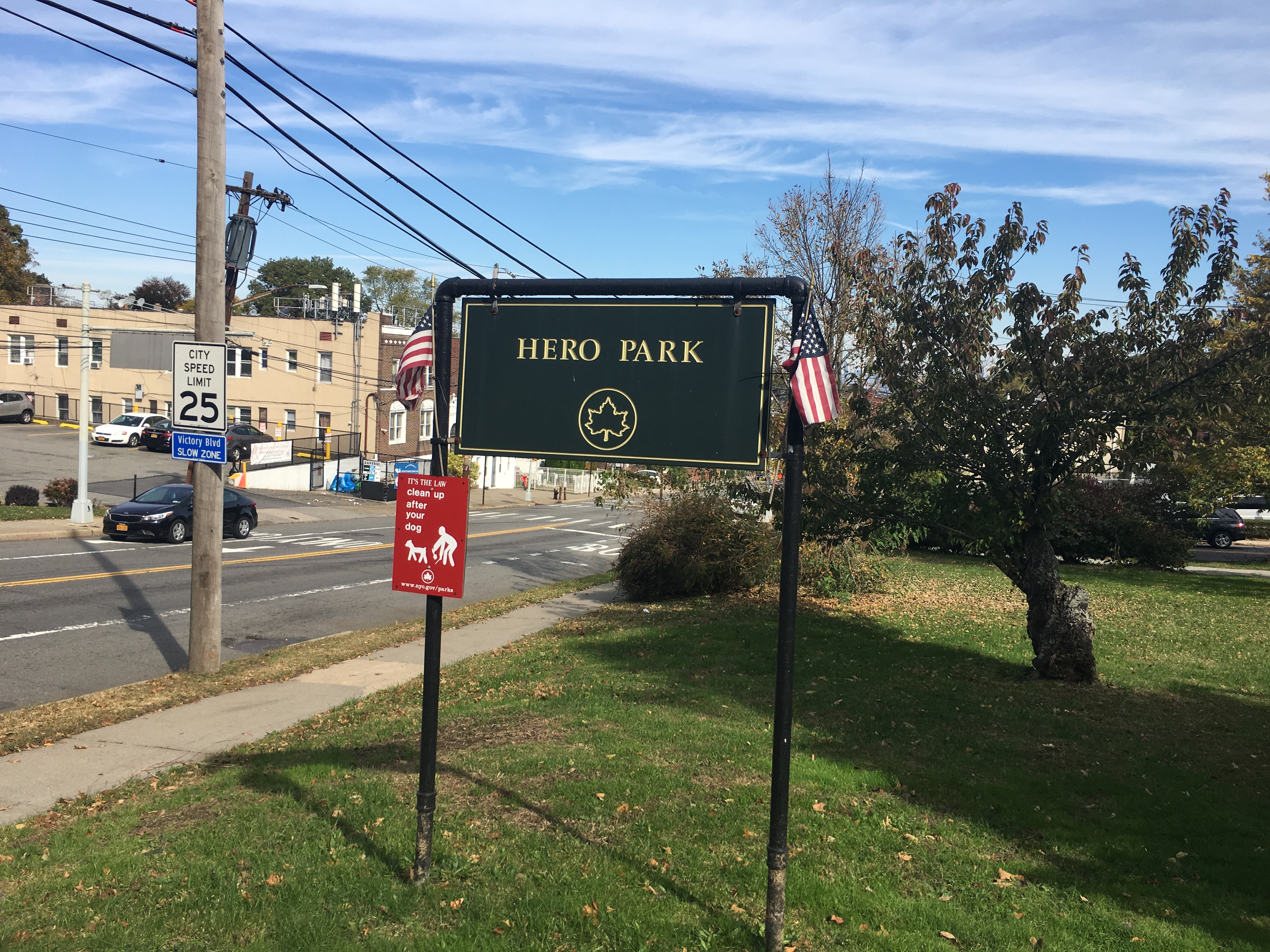 G. A sign found at each entrance of the park, entrusting the park to the care of the people. 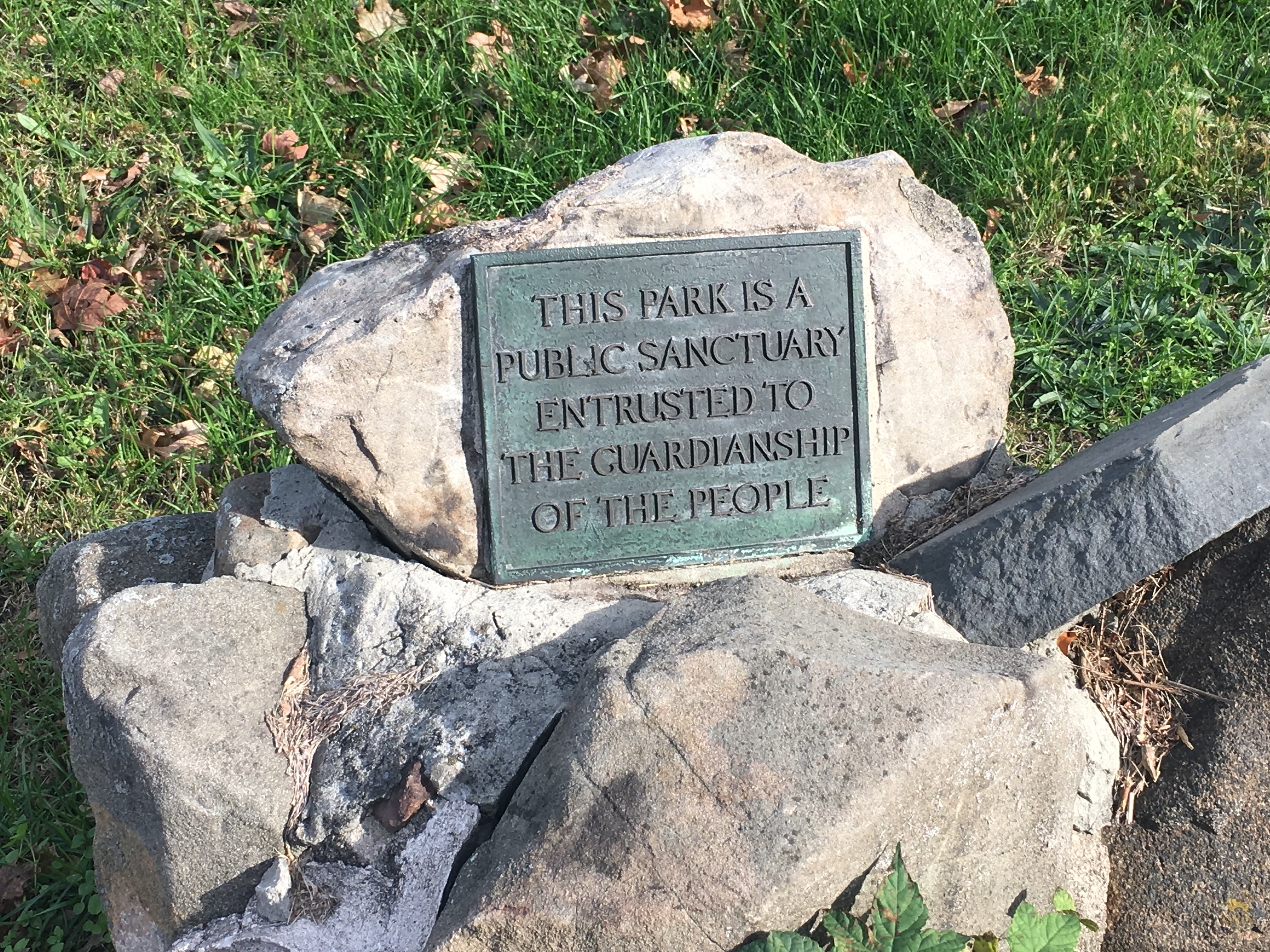 The land on which the park now sits was originally owned by Louis and Berta Dreyfus, owners of the L.A. Dreyfus Company, which produced the base for chewing gum companies. The property consisted of a two acre field with a large rock in the center, about twelve feet tall. The rock was thought to resemble a sugar loaf, and thus was henceforth dubbed "Sugar Loaf Rock." At the turn of the twentieth century, many of the local kids would come to play in the field and climb on Sugar Loaf Rock.

The Great War broke out in 1914, and once the United States started to play an active role in the war in 1917, many Staten Islanders responded to the call. By 11 November 1918, 144 would be killed. The names of these men, who may have once played in the field surrounding Sugar Loaf Rock, are listed on a brass plaque placed on the northeast face. Facing southwest is another plaque, briefly noting the history of the rock, it having been placed in its present location by a glacier thousands of years ago. This plaque also notes how the rock has been, in a sense, re-purposed to commemorate Staten Island's fallen soldiers of the "Great War."

The land was donated by the Dreyfuses to the City of New York and turned into Hero Park in 1920. A plaque on the southeast face recognizes the Dreyfuses, their contribution in donating the land, and their role in upholding the memory of the heroes the park's name memorializes.

In the following decades, Hero Park greatly changed. Vandalism plagued the park over the years. Sugar Loaf Rock was covered with graffiti, vestiges of which can still be seen today. Due the substantial efforts of the Parks Department, the park has been cleaned up. Many of the plaques by each tree mentioning the names of each fallen Staten Islander were stolen, until eventually the New York Parks Department removed the rest, and consequently none remain. Despite this, today Hero Park can continue to do proper justice to the servicemen from Staten Island that gave their lives during the First World War.