The Emerald Facade of the Los Angeles Jewelry Center. 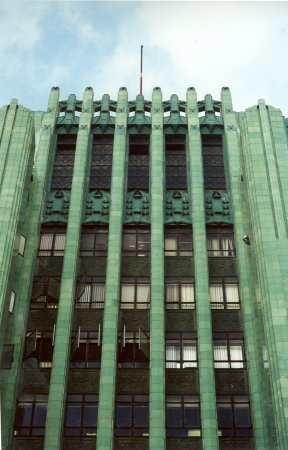 A shot of the Jewelry District taken looking down 7th Street. 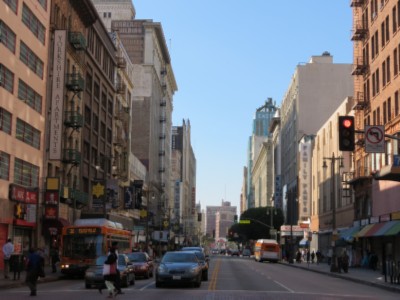 The Los Angeles Jewelry Center sits at the heart of what is now the Jewelry District of Downtown L.A. According to the L.A. Convention Center, it is the largest district dedicated to jewellery in the United States, with annual reported sales from the area at around $3 billion. It is made up of nearly 5,000 businesses, with vendors on Hill Street, Olive Street, and Broadway. Shoppers can find kinds of related products such as designer jewellery, precious stones, gold, and silver.

The Jewelry District is predominantly made up of early twentieth-century buildings. The median year in which the buildings in the area were built is 1923. The oldest building to remain in the district is located on 543 South Broadway Avenue - a three story, 32,600 square foot commercial space that is now occupied by Teresa’s Bridals. Two of the earliest jewellers to establish stores in 1932 were the Laykin Diamond Company (Laykin et Cie) and Harry Winston & Co.

Almost all of the buildings within the Jewelry District were designed for general office use with retail spaces on the street level. The Downtown areas rapidly developed in the first half of the 20th century, but it did not feature skyscrapers like in Chicago and New York because State Law limited them to 150ft. The influx of jewelry stores in the area did not come about until after the 1960s when gold came to be seen as a safer investment than U.S. dollars.