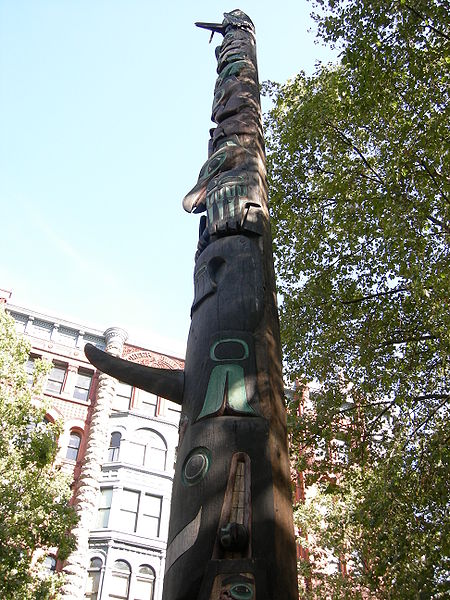 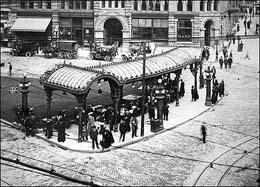 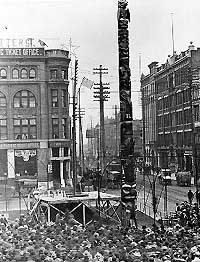 The Pioneer Building, Richardsonian Romanesque in style, is one of the best preserved buildings in Pioneer Square.  Once at the heart of the city, Seattle's founders settled Pioneer Square in 1852, following a brief six-month settlement at Alki Point on the far side of Elliott Bay. The early structures in the neighborhood were mostly wooden, and nearly all burned in the Great Seattle Fire of 1889. City engineered saw the opportunity to improve Seattle’s drainage system as the city rebuilt. To create a slant that encouraged drainage to flow out of the city, the engineers elevated Seattle’s street level a fully story using hand-cranked jacks more powerful than those used in changing a tire. The catacombs created were largely forgotten and trod upon from above until the 1960’s. By the end of 1890, dozens of brick and stone buildings had been erected in their stead; to this day, the architectural character of the neighborhood derives from these late 19th century buildings

A cast iron umbrella once a much larger shelter for transit passengers, the Pergola sits in the center of the square. Prompted by Seattle's first World Fair, the 1909 Alaska-Yukon-Pacific Exposition, the Yesler and James Street Cable Car Company erected the Pergola as a waiting shelter to serve tourists and transit passengers. The Pergola was the most lavish of its kind west of the Mississippi with ornamental iron columnns, wrought iron ornamentation and a large underground restroom.

In January 2011 a semi-truck toppled the 93-year-old cast-iron Pioneer Square Pergola.  The 18-month project, paid for by an insurance settlement by the trucking company, cost approximately $3.5 million to restore this landmark. Careful restoration efforts allowed for the reuse of original fabric of the building rather than recasting new elements.

The Totem Pole standing in downtown is a replica of an original pole carved around 1790. The Totem Pole first appeared in 1899, after members of the Chamber of Commerce, vacationing in Alaska, stole it from Tlingit Indians. The men gave the Totem Pole to the city as a gift, but the tribe sued for its return and $20,000 in damages. The courts found the men guilty of theft, but fined them only $500 and allowed the city to retain ownership of the landmark. Attorney William H. Thompson defended the thieves by arguing that the theft was for the greater good because more people would see it downtown, "The village has long since been deserted ... Here the totem will voice the natives' deeds with surer speech than if lying prone on moss and fern on the shore of Tongass Island." However, on October 22, 1938, an arsonist seriously damaged the landmark. The Totem Pole was removed and in 1940 a replica replaced it.