The Seattle Metropolitan Police Museum was the largest police museum in the American West prior to closing in 2017. 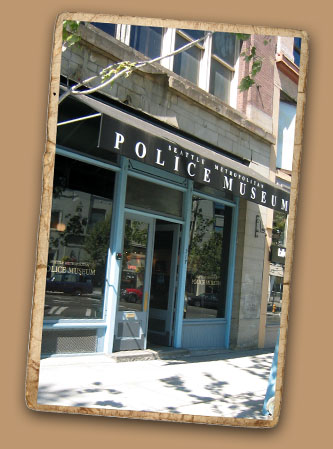 The Seattle Metropolitan Police Museum has an extensive research library containing historic documents, photographs and artifacts dating back to the 1800s from both the Seattle Police Department and King County Sheriffs Office.  The Museum also has a vast amount of information regarding personnel history, vehicle data, cultural & social writings and complete volumes of the Seattle Police Callbox, Washington State Sheriff & Police Reporter as well as the Northwest Police Journal, which covers all police related issues throughout the state of Washington from the 1920s through the 1970s.

The Police Museum was formed in 1997 by Seattle Police Officer Jim Ritter and other police officers who transformed an abandoned building into the largest privately operated police museum in the United States representing a major U.S. city and county. The Police Museum is does not receive financial support from any government agency and is funded entirely through the generous donations of over 1,000 Seattle Police Officers and King County Sheriffs Deputies, Admission fees, Gift shop sales, private donations, facility rentals and grants.

The Seattle Metropolitan Police Museum's fleet of original vintage police vehicles is comprised of fifteen (15) cars used from 1963 to present. Due to limited space at our main facility, these historic vehicles are kept off-site at a variety of locations.