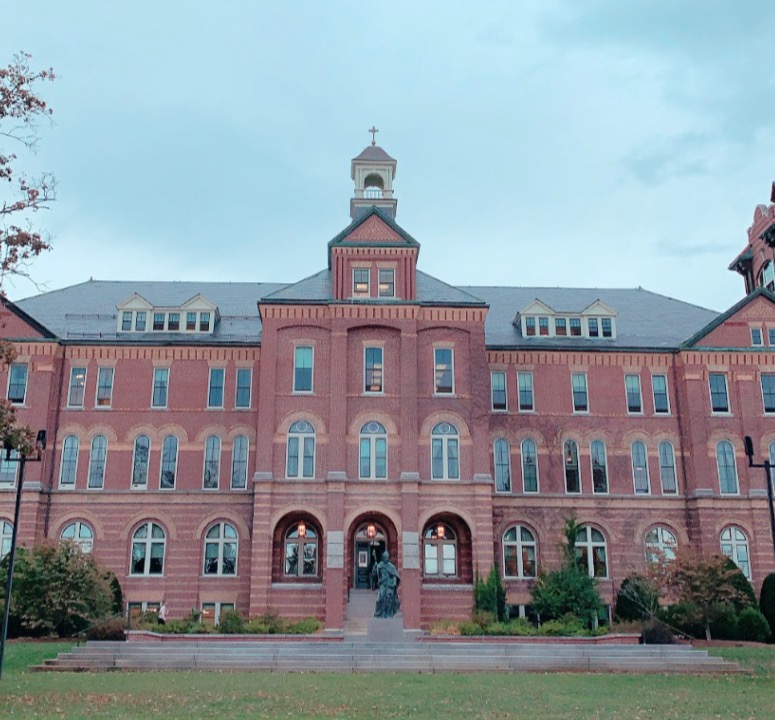 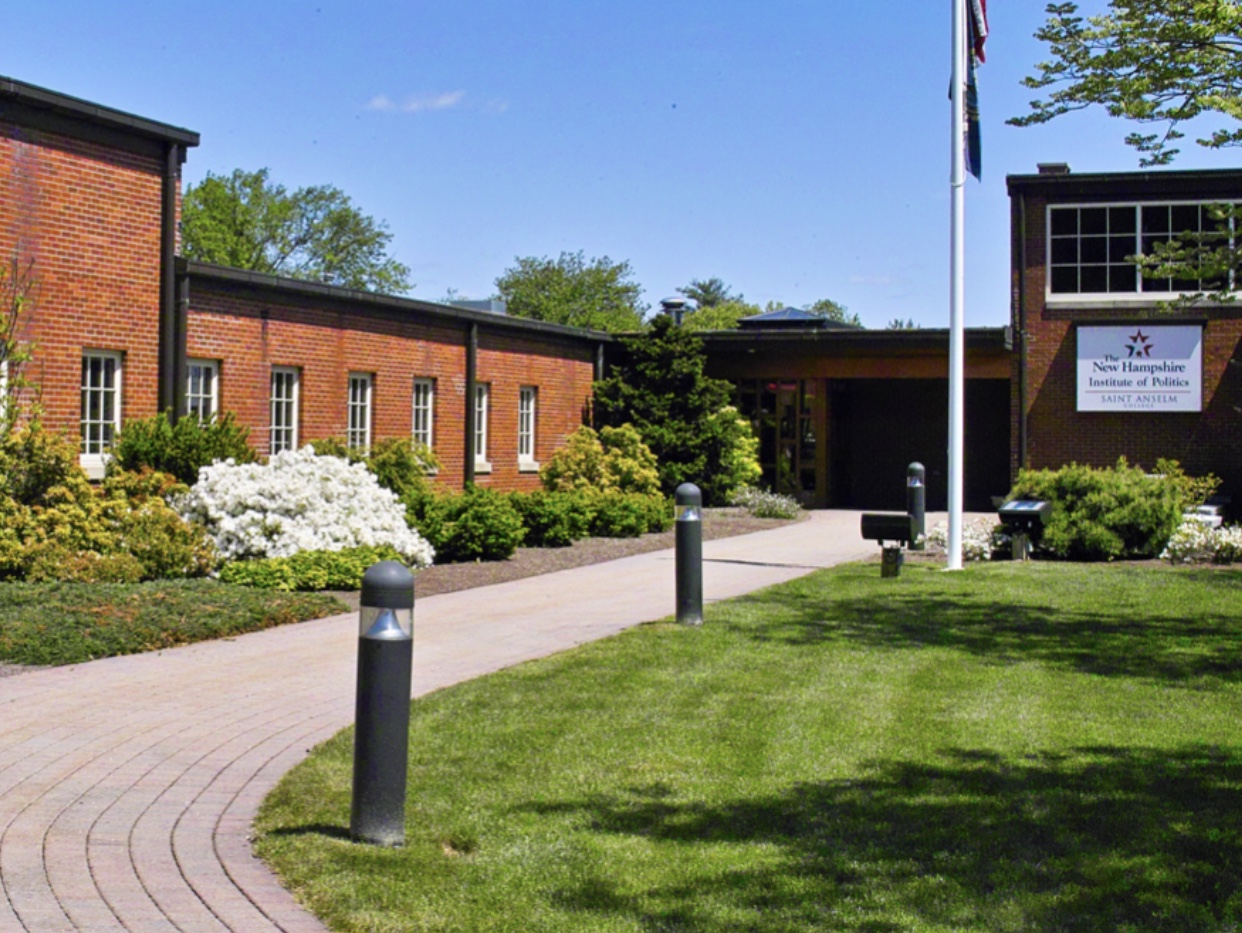 In 1995, Assistant Vice President of Saint Anselm College, in talks with the college’s Politics Department proposed the idea of an Institute of Politics on campus to the NH Board of Trustees. The idea was prompted by an effort to reap the benefits of New Hampshire’s tradition of being the first state to vote in primary elections. Later that year, the Board of Trustees passed the proposition. 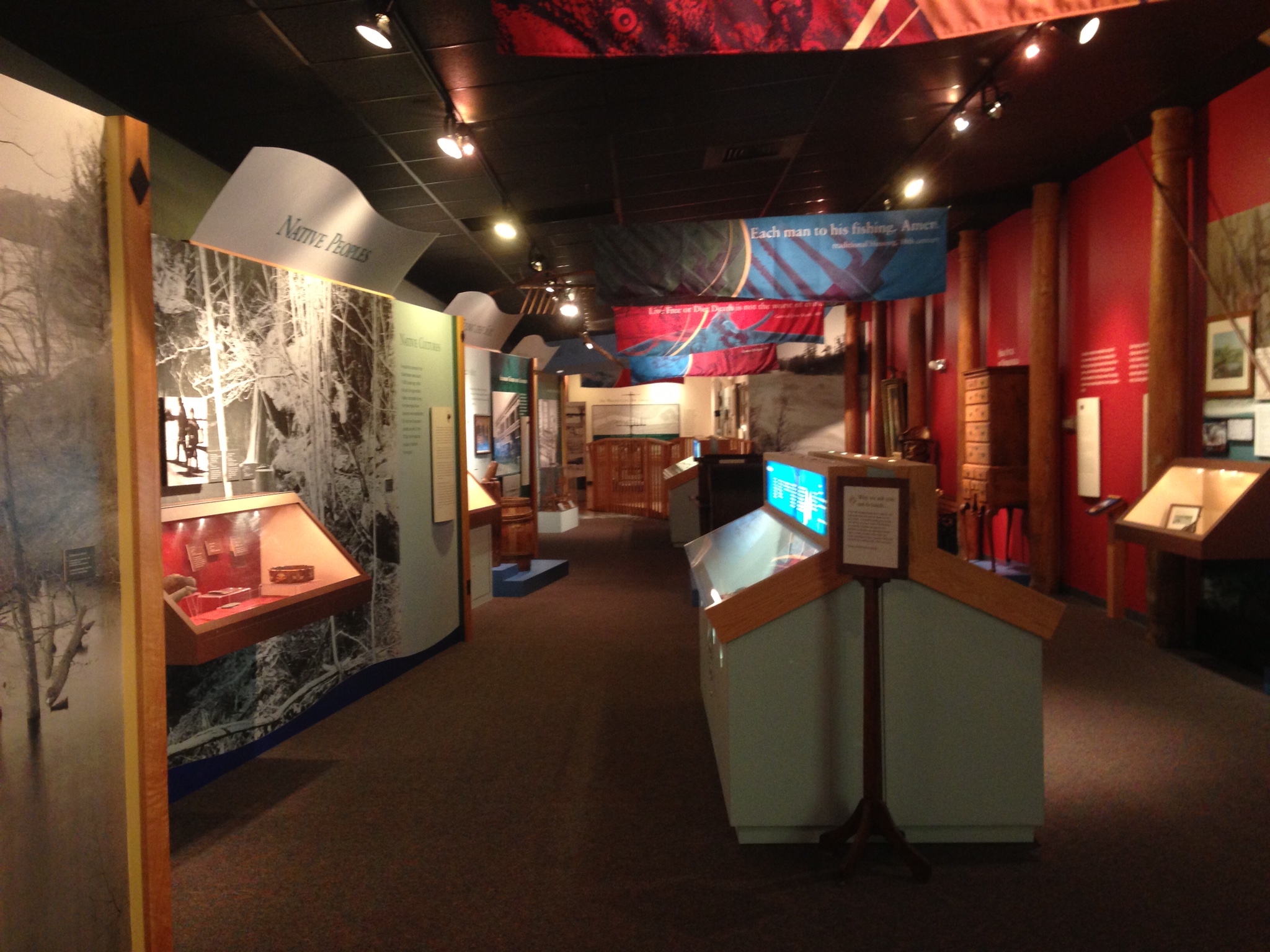 The Millyard Museum was opened in 2001 by the Manchester Historic Association. It is housed in one of the Amoskeag Manufacturing Company’s mill buildings (Mill Building No. 3) on Commercial and Pleasant Streets. Operating Tuesday through Saturday, the primary attraction of the Millyard Museum is the exhibit Woven in Time, 11,000 Years at Amoskeag Falls, which explores the history of civilization in Manchester. 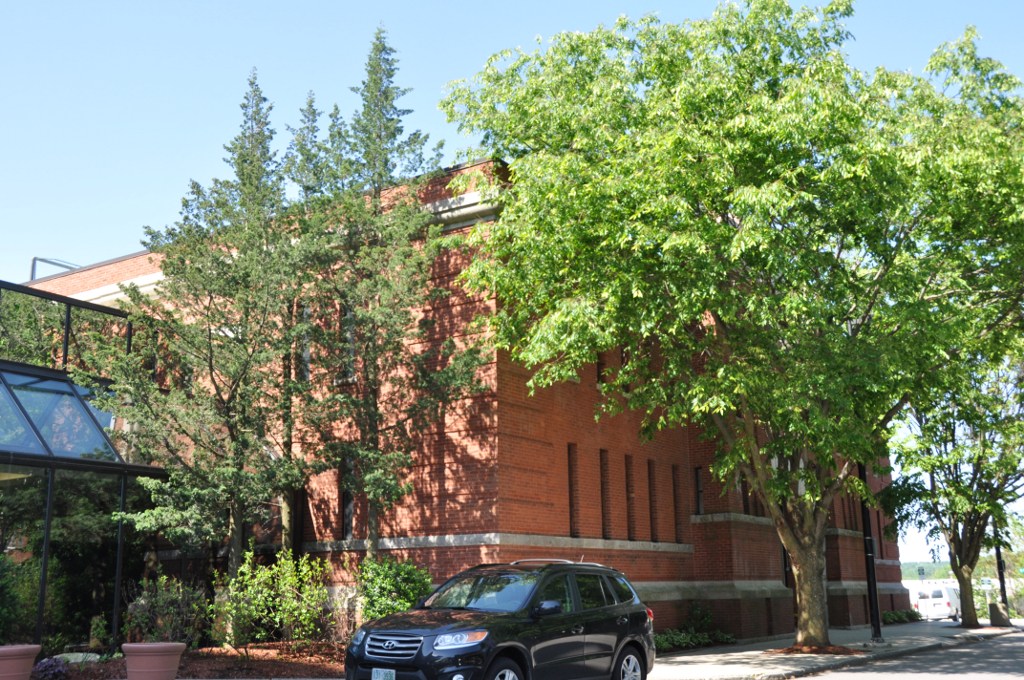 The New Hampshire State Union Armory located at 60 Pleasant Street was built and opened in 1904. The project was done under the supervision of Alfred A. Collins. It was the first state armory in New Hampshire and was the first place where state police could consolidate their fundamental tasks and equipment. The brick structure’s function originally was defense and later became a building for Hermsdorf Manufacturing. Today, it is privately owned, commercially used, and unmarked. The historic armory was added to the National Register of Historic Places on August 10, 1982.

Built in 1916, the Eagle Theatre was renamed to the Vitaphone Theatre in 1931. Audiences could see performances for low prices compared to other theatres and the theatre also provided the first movie with sound in the city. Today, the structure is a site occupied by the Manchester Place luxury apartments in Manchester, New Hampshire. 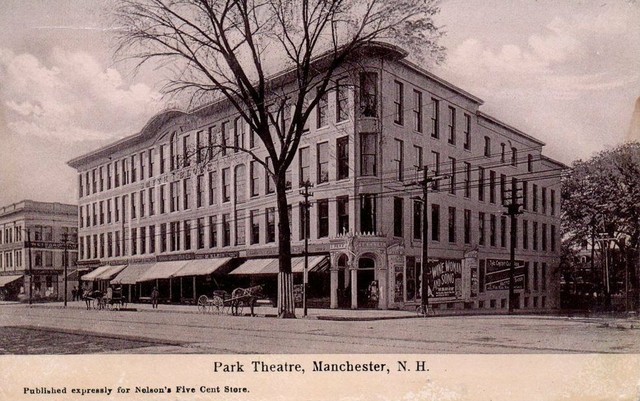 The Park Theatre existed from 1856 to 1930. It was known as Smyth’s Hall before the change of name in 1899. The theater cycled through the names Gorman’s Theatre, the Music Hall, and New Elm Street Theatre before settling on Park Theatre. In 1930, the theatre closed and in 1970 it was demolished in order to build the Hampshire Plaza. It was part of a vibrant set of movie theatres in the city now known only in memories.

The Manchester Opera House, located at 20 Hanover Street, Manchester NH, opened in 1881. The building was designed by John H. Flanning in the Queen Anne style. The Opera House closed due to the competitive nature of the movie industry and, in 1906, it was repurposed into The Strand Theatre. The stage of the Strand Theatre was cut back in 1938 in order to create more space for seats, bringing in more audience members. In 1977 the theatre closed and on March 9, 1985, there was a fire destroying the theatre and its surroundings. After the theatre was destroyed, its site was converted into apartment buildings. The “Strand” letters can still be found outlined on the tile walkway outside of the building in downtown Manchester. 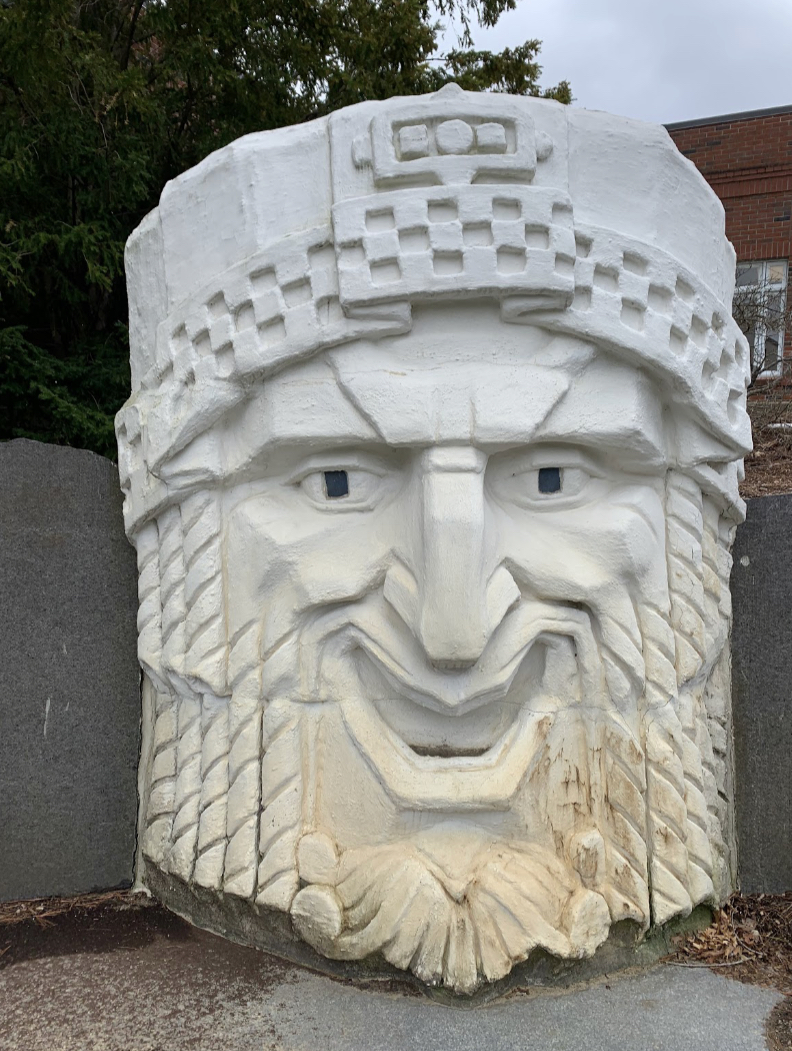 Once located at 1128 Elm Street in Manchester, NH, the State Theatre was renamed to Queen Theater, Cine 1, and Cine 2 over the course of forty years. Today, the only thing that reminds people of the existence of the State Theatre is a Greek head on the campus of Saint Anselm College. The Stone head was on the theatre in 1929 and now remains on the ground in front of the Dana Humanities Center after being donated to the College in 1984 by Arnold A. Green. 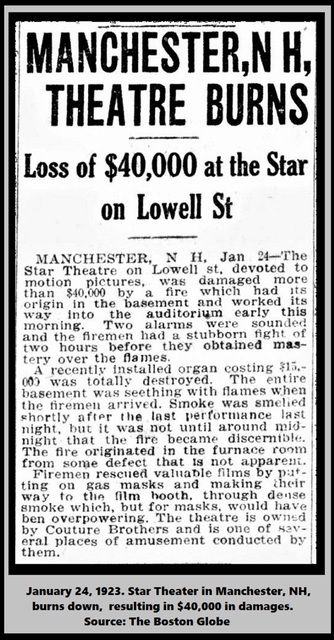 In 1914, the Star Theatre opened in an unused building at 30 Lowell street, Manchester, NH. The theatre held shows and featured stars such as Mary Pickford up until 1932. The building was then converted to “The Coconut Grove,” which was a ballroom and social hangout that lasted until 1953. It was demolished in 1981 to build the parking lot that resides there now.

In 1909, the roller skating rink known as Mechanics Hall was converted to a theater. This theater came to be known as Mechanics Theater until it became a meeting hall called, “The Academy." A mysterious fire resulted in the building burning down. Today, it is a parking lot next to a Red Arrow Diner. 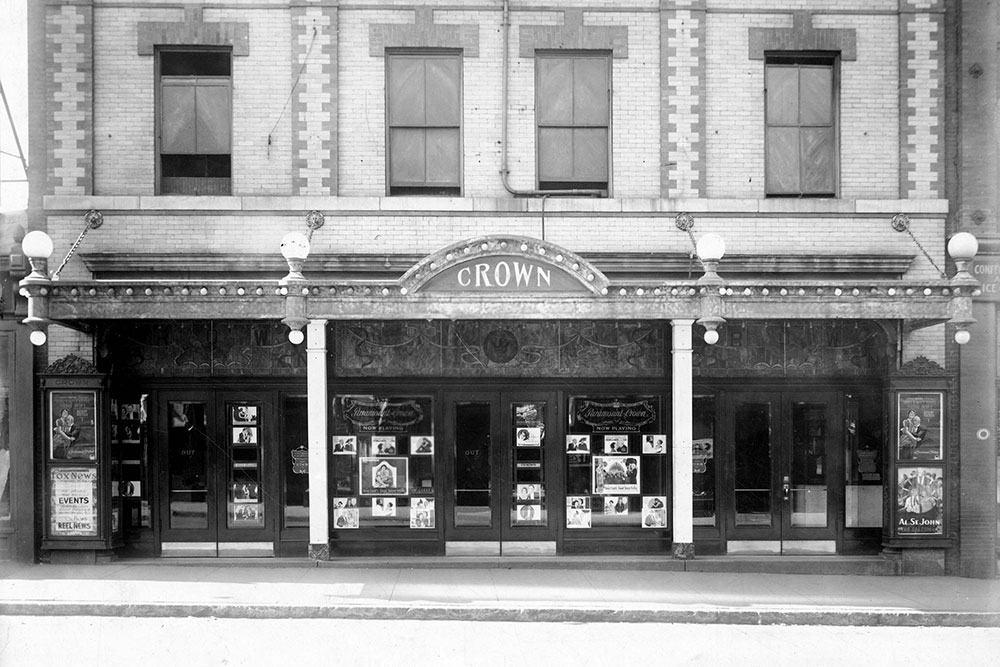 Located at 97 Hanover Street, Manchester, NH, the Crown Theatre opened in 1925 and was renamed to the Variety Theatre in 1955. In 1961, the theatre closed and in 2014 it became an office space. Today, it is a tavern pub, “The Crown Tavern.” The tavern stays "true to their roots" and highlights the Crown Theatre's history on their website.

Established in 1914, the Palace Theatre preserves the historic facilities of the theatre while providing entertainment to the community. Today, the Palace Theatre is the only survivor of “The Great White Way,” and brings in many visitors with its excellent shows.

Located on Oak Hill Drive, the Weston Observatory is on the summit of Derryfield Park. The tower was built in 1896 in honor of James Adams Weston. He was a civil engineer, banker, and more famously a Mayor of Manchester and a Governor of New Hampshire. The sixty-six foot tower is normally closed to the public but it opens on certain weekends in October for people to view the foliage. While Weston was mayor, he put programs together “whose purpose was to beautify Manchester’s parks and cemeteries.”

The Currier Museum of Art is located in Manchester, New Hampshire at 150 Ash Street. The museum was founded in 1929, as the Currier Gallery of Art. In the 1890s, former New Hampshire Governor Moody Currier and his wife, Hannah Slade Currier developed the idea to found an art museum. After the death of both Moody and Hannah, a board of trustees was appointed to construct their wishes. Even though he was not an art collector, Moody Currier desired to establish an art museum, “for the benefit and advancement of humanity.” The then-director says the gallery’s name was changed in 2002 in order to recognize “the Currier’s true mission and clarifies our function for those less familiar with us.” Since then there have been expansions to the museum offices and the museum has bought properties in the area.

Beginning on the outskirts of Manchester NH, at Saint Anselm College, this tour takes visitors through a list of varying museums in downtown Manchester NH. Each of which detail historical events and topics which were and continue to prevail throughout New Hampshire. The tour then guides visitors through the most popular historic sites themselves: the list of Manchester’s historic theaters scattered throughout the “Great White Way”. The tour ends on a fitting note, bringing visitors to the Currier Museum of Art, a find mix of New Hampshire’s history, education, and art.