Item 4 of 10
This is a contributing entry for Sumner Washington, Historic Building Centennial Celebration, 1921 to 2021 and only appears as part of that tour.Learn More.

In 1921 a number of older wood buildings on Sumner's Main Street were torn down and replaced by five new brick buildings. One was a double brick building that cost seven thousand dollars to build. ($93.000 in this years dollars). Half of the building, 1008 Main, was built by L. D. Howe. The other half, 1006 Main, was built by R. G. Fyrer. They were the owns of the Sumner Pharmacy. The buildings shares a center wall and front center pilaster. there are three capped pilasters. Both have the same upper facade, a simple cornice with a tapestry design in the upper brick. Both had transom windows and the same style of recessed entrance, bulkheads, and windows facing Main Street. On 1008 Main, the transoms and original entrance have been replaced with a recessed entrance. 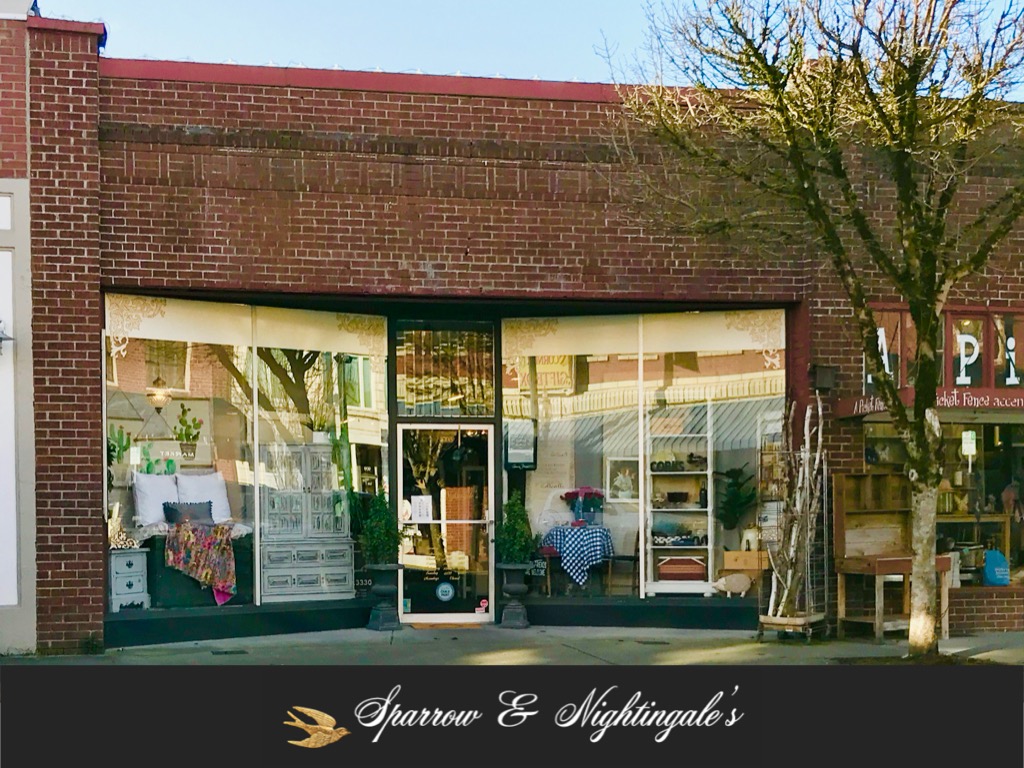 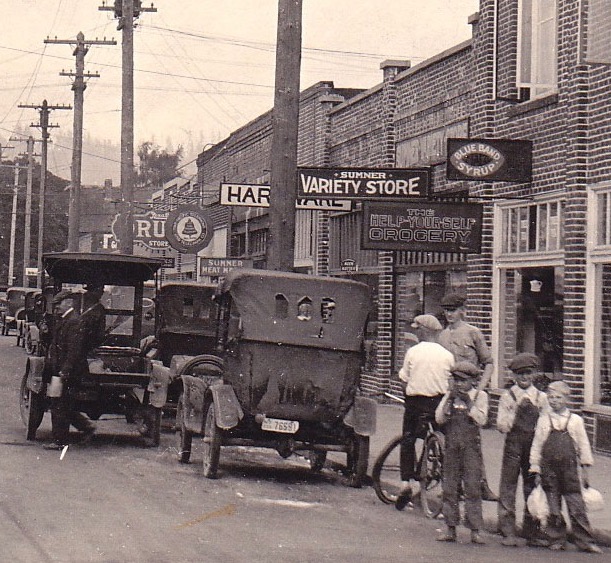 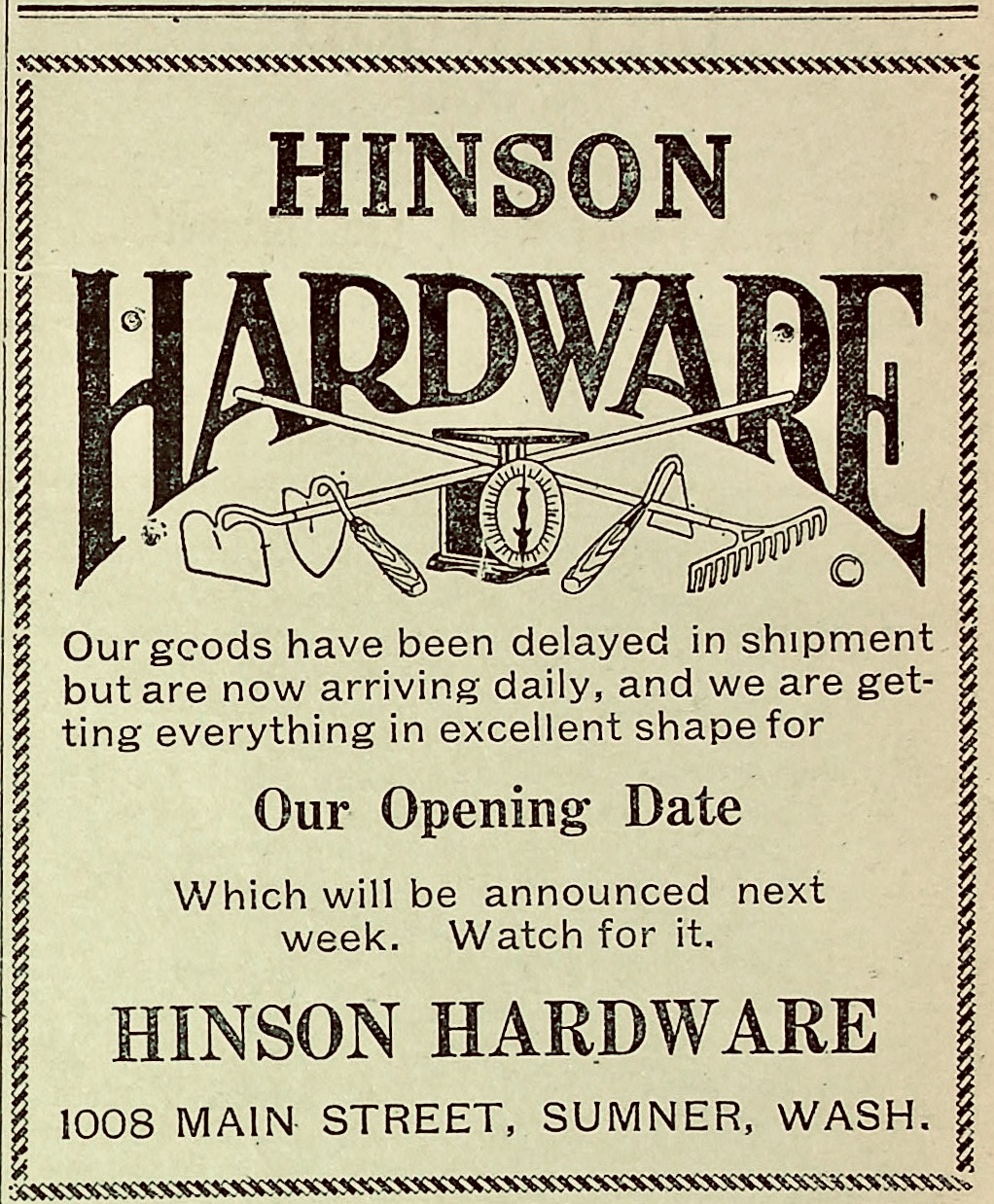 Most of the earlier occupants of the Howe building were in the hardware business. Through most of the 20th century there were at least two hardware stores on Main Street.

Hinson Hardware was the first occupant of the building, opening for business in September of 1922. There was competition, an existing hardware store and a plumber that also sold retail.

C.D. Hinson was from Kent Washington. When he moved to Sumner to open the store he lived at 714 Kincaid Avenue, a small bungalow three blocks from the store. He had a family, his wife, Anna, and a daughter, Bernice. It is likely he walked to the store, in 1921 firing up an automobile to go three blocks was not something people did.

In the mid 1930s the business became Wings Hardware.

A 1938 phone book showed Wing Hardware as the occupant of the building and a 1958 phonebook still listed Wing Hardware at the address. Fred Wing and his wife Gertrude moved from Bellingham to Sumner in 1935. Fred went into the hardware business and Gertrude taught grade school for 18 years at Wade Calavan Elementary. They had two sons, Roger and Douglas.

Some time around 1959, the business changed to Geter’s Home Town Hardware. The owner was Geter Strokes.

In the early 60s it became Ludden Hardware when Jerry and Dolores Ludden moved to Sumner from Seattle. The Luddens stayed in the hardware business through the 90s, however in 1984 they moved the business from 1008 Main to 1011 Main, the Masonic building, where it became a Tru Value store. A news story tells us that with the help of friends, "half the town" helped them make the move in one Sunday. "we never closed a day, Dolores recalled". Jerry also served on the city council for 20 years.

After Ludden Hardware moved, 1008 Main then started a new life in the clothing and fashion business. One earlier name was "The Clothing Express".

1008 Main is now Sparrow & Nightingale's, a charming shop for antiques, vintage finds, locally crafted gifts and upcycled home decor. Reflecting the hardware history of the building, the shop carries a line of artisan paints, coatings and sealers. Classes are available.