Before the Union National Bank occupied this site, it was occupied by the Traders Building. This building housed a number of facilities including the Trader Hotel, an opera house, and a number of stores. It was the largest building ever built in the Clarksburg Historic District and resembled a modern shopping centre. However, the Traders Building burnt to the ground in 1911. It was quickly replaced by the Union National Bank building, which still stands today. The ten-story structure was designed to resemble a Doric column. It has remained downtown Clarksburg’s tallest building since its completion in 1911 and has served banking institutions continuously. These days, the building also includes office space for local businesses and organizations. 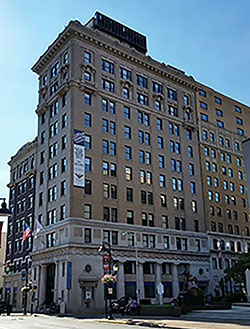 Postcard of the view from the Union National Bank, 1928. 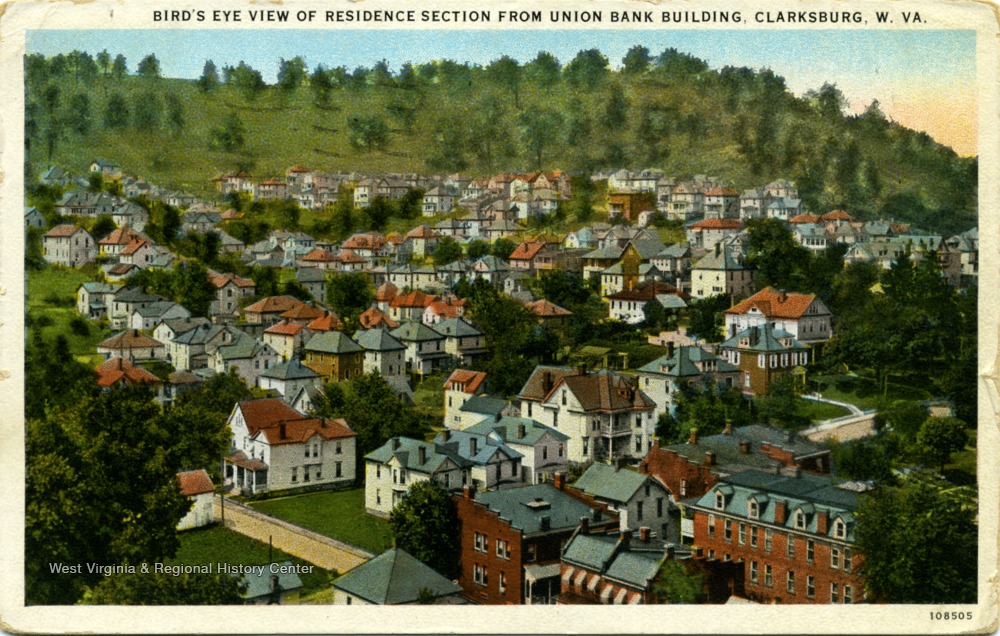 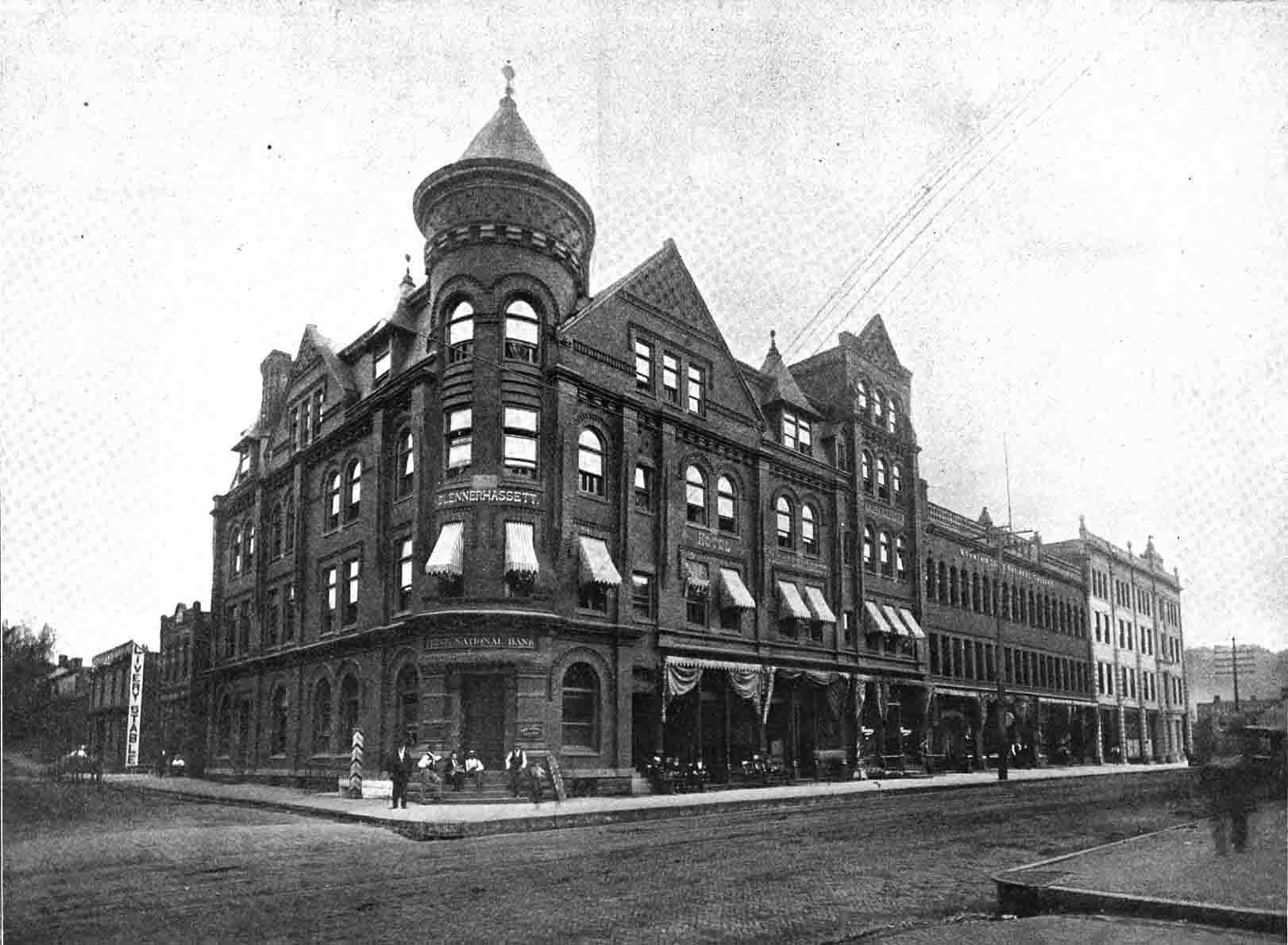 Photograph of the lobby of the Traders Hotel. 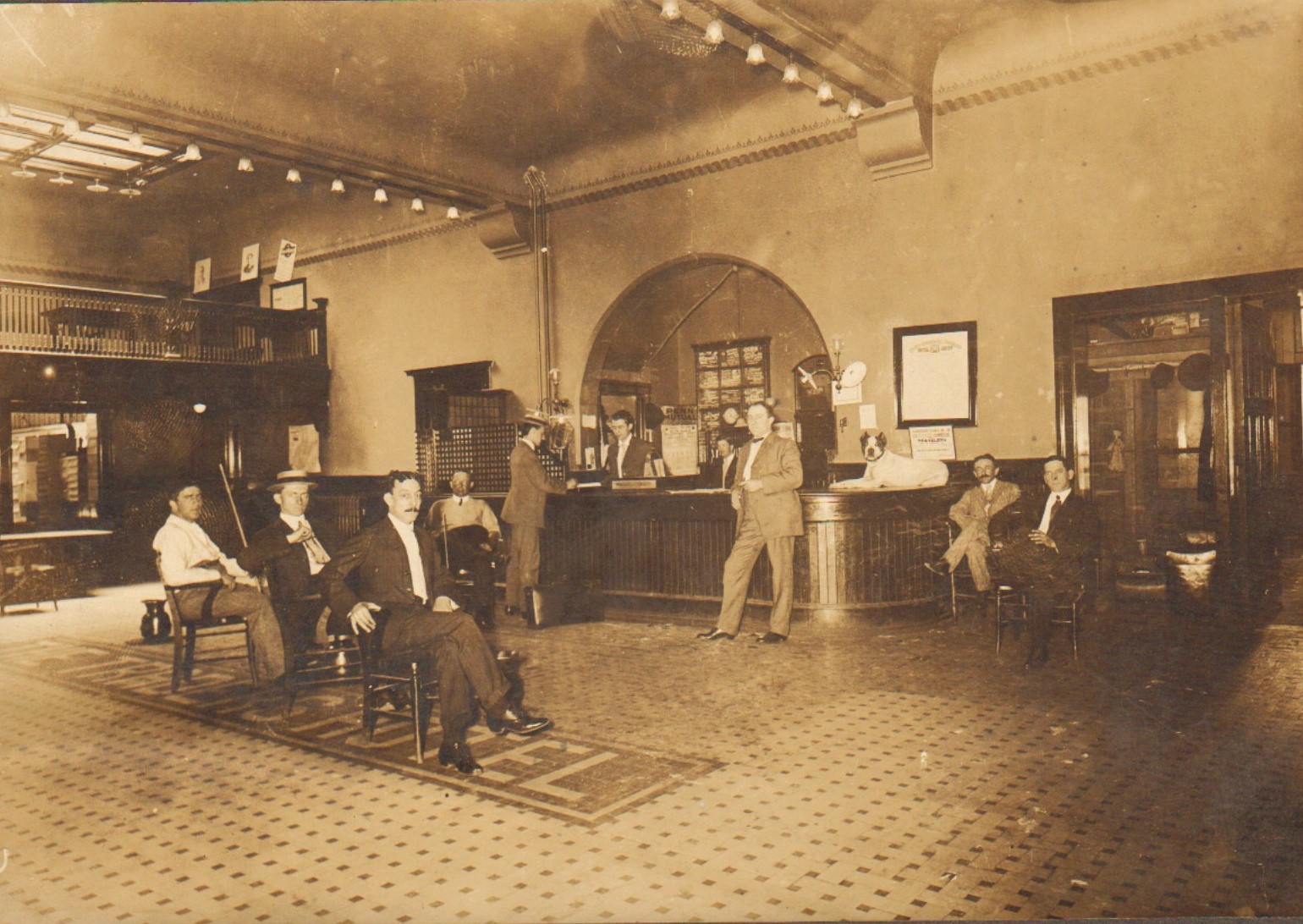 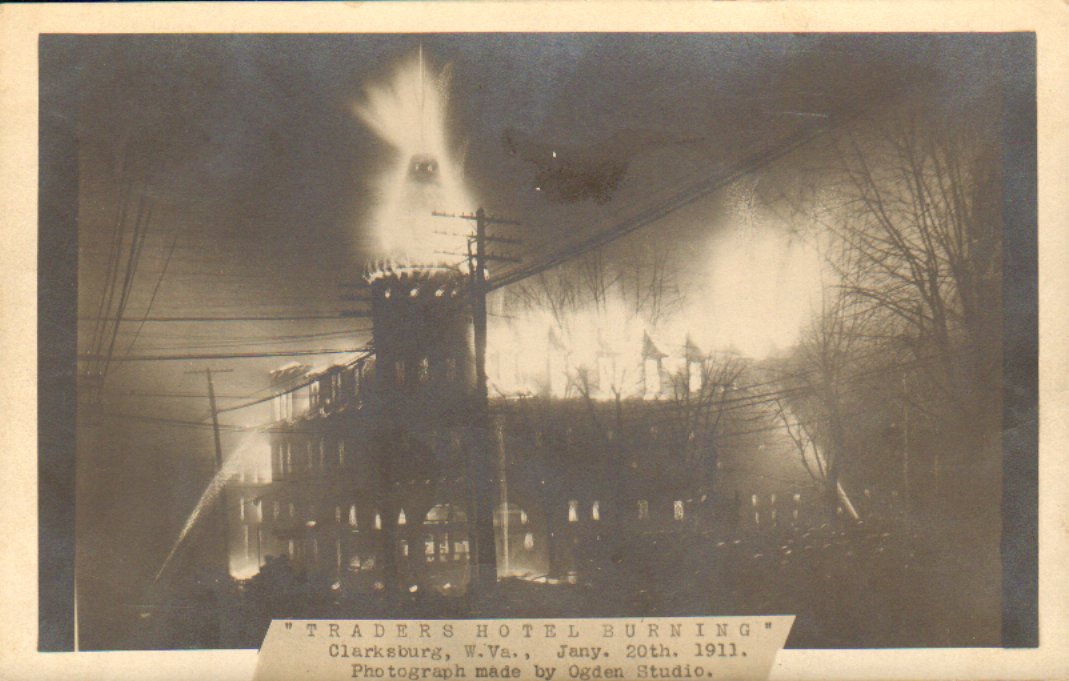 The destruction of the Traders Building. 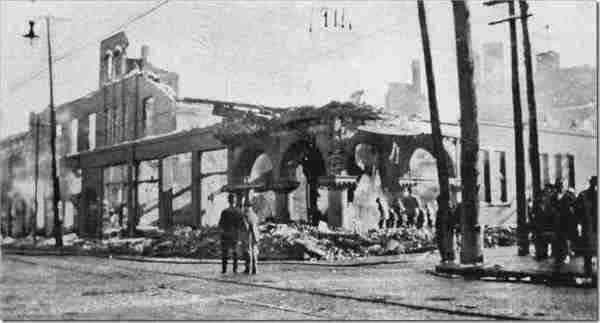 Color postcard of the Traders Hotel. 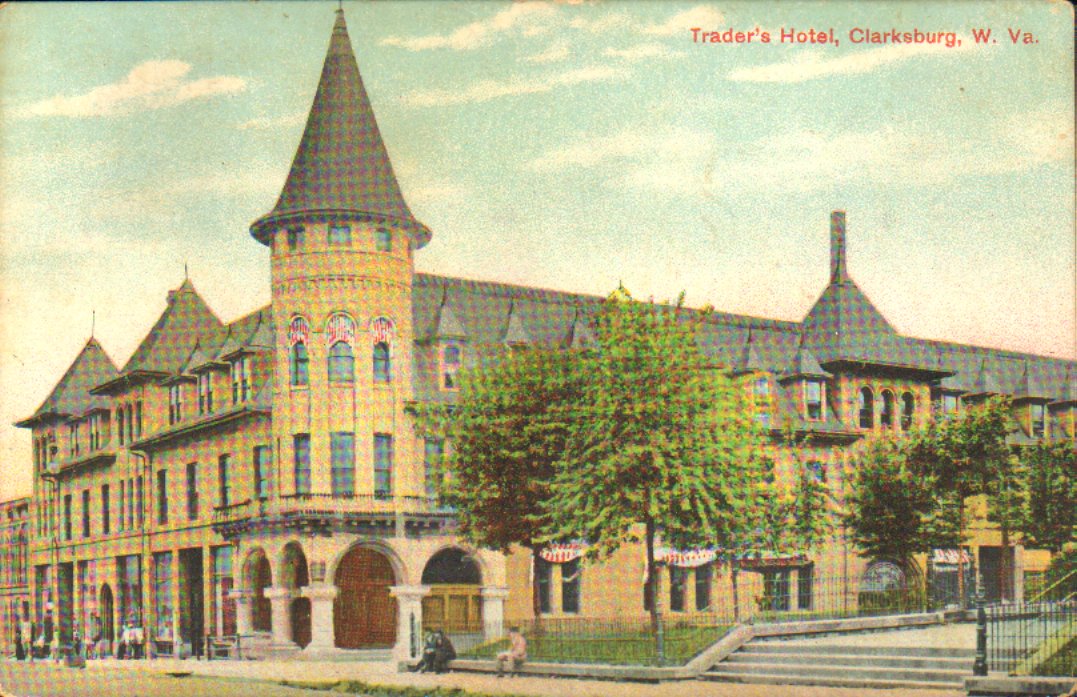 The Traders Building occupied this site before the Union National Bank did. The Traders Building was designed by Columbus, Ohio based architects Yost and Packard, and built from 1894-1895. The Traders Building was the focus of downtown Clarksburg’s social scene in the late nineteenth and early twentieth centuries. It housed the Traders Hotel, a bank, eight stores, three lodges, an opera house, and several offices. The building is almost better categorized as a complex, and was a precursor to the more modern shopping mall. It is frequently characterized as the grandest building ever to grace Clarksburg.

Tragically , the Traders Building was short lived, as it burned down in 1911, just a little over fifteen years after opening its doors. Due to the wood frame structure of the building and gas lighting that was prone to fire, the building was easily flammable. Early in the evening on January 20th, 1911, the Clarksburg fire department responded to a fire on the north side of town. At 6:15 that evening, flames were discovered on the Third Street side of the Traders Building. Due to the fire department responding to the first fire, the fire at the Traders Building quickly engulfed the structure. Firefighters fought throughout the night to extinguish the flames, but were unsuccessful and the building burned to the ground.

The fire at the Trader Building was not Clarksburg’s first calamitous fire. In 1851, the city had two separate fires that destroyed nearly all of Downtown. On May 10th, all of the buildings on the north side of Main Street from Third Street to Fourth Street burned, and on November 12th, most of the buildings on the south side of the street from Second Street to the courthouse were destroyed as well. The cause of these fires were arson committed by three young men belonging to prominent families in the community. They used balls of tow soaked in turpentine and tossed them onto the roofs of the buildings they destroyed. A Frenchman was initially charged with planning the fires based solely on the fact that he was French. The Harrison County Court released this man several months later because they had no evidence to convict him.

At ten-stories high, the Union National Bank remains Clarksburg’s tallest structure. Despite the height, the building is relatively thin. This was a conscious choice by the architects, who designed the building to resemble a Greek Doric column. This was accomplished through a hefty base, unadorned middle section, and modillioned cornice. A mezzanine and penthouse atop the building bring it to an honorary eleven floors. The building is supported by a steel frame, though the exterior brick, limestone, and terracotta certainly do not betray this fact. The interior lobby is sumptuously decorated with marble. The Union National Bank occupied the bottom two floors for lobby operations. The upper floors were all rented as office space, though the bank likely also utilized them itself. The Union National Bank merged with One Bank in the latter half of the twentieth century, which in turn merged with Chase Bank. The Union National Bank continues to be used as a banking location, as well as office space for local businesses.